I, For One, Welcome Our New Robot Overlord

love creatures. It's no secret that a hard-hitting fatty or fearsome flyer dripping with flavor excites me much more than some seemingly (but not really) random trinket or a necessary-but-dull utility spell. Tapping that inner spark of "Aww yeah!" is all it takes to set my card-flopping desire afloat.

But there's a certain kind of creature that really stokes the fires of my will to beatdown: the "lord." From a pauper implement like Veteran Swordsmith to the as-mana-intensive-as-you-can-make-it Joraga Warcaller, playing creatures that boost other creatures makes playing more creatures great.

If you've never seen a 30/30 Elf Warrior with trample, or a plethora of 3/3 Goblins with haste, you're missing out. Making small fries into big guys, or big guys in the biggest, then bopping your opponent (or opponents!) over the head with them is something that excites more than just me.

Which is why I'm very pleased to share the Mistform Ultimus of creature-pumping tools: Adaptive Automaton! 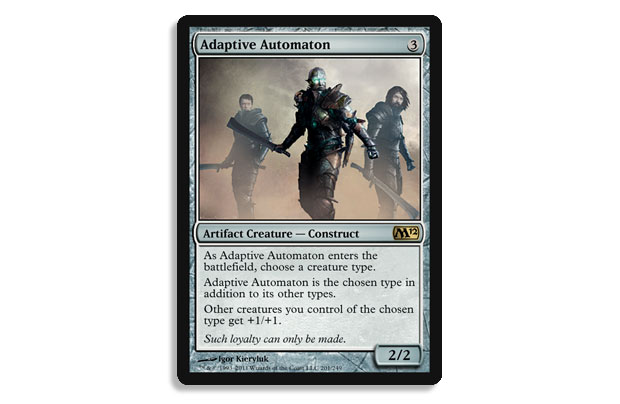 This is a leader that always gives us what we want.

Adaptive Automaton has two very special characteristics that make it a particular kind of creature lord.

Being colorless, and only as expensive as our usual leaders (see Goblin Chieftain, Elvish Champion, and friends), makes it a great fit for any tribe. It doesn't matter what colors you're playing or which creature type you're interested in; if you can cast spells you can cast this guy.

Being able to choose what creatures you have that you want to bump up gives it deep flexibility. Everything from Merfolk to Soldiers to Samurai to Insects stand to benefit from our adaptable new friend.

But let's clear a few things up right off the bat. The first is that Adaptive Automaton is not Brass Herald.

While the Automaton doesn't potentially fill our hand with tribal goodies, it is a creature that actually sits on the battlefield sharing the chosen creature type, and therefore receives any associated benefits thereof. It also costs half as much, meaning that we can slip it onto the battlefield quickly; it's a lord that's as fast as most color-based counterparts.

The second point is that Adaptive Automaton is not Coat of Arms.

I really enjoy Coat of Arms in my decks filled with creatures of one type. There isn't anything else quite like it in Magic. But I've also seen the Coat cause epic backfires: if any of your opponents are outpacing you with creatures of a different type, you're in for a world of hurt. Adaptive Automaton doesn't pump every creature of your chosen type, but quietly helps just yours. It's less flashy, but it also doesn't come back to bite you.

So what can be done with Adaptive Automaton? There are some obvious options:

But being a singular leader isn't all that Mr. Automaton does. It can also fill a uniquely niche role as the variable lord.


While Elf, and Warrior, and even Elf Warrior, decks have been done before, this one is a little different. Our goal is straightforward—make Elf Warrior creatures, then attack!—but the interactions we've set up make this much more interesting than it may seem.

Bramblewood Paragon works with every other creature in the deck: they are all Warriors, including the ones we can create as tokens. Since they are all Elf creatures, aside from Lovisa Coldeyes, Imperious Perfect pumps them as well. Radha, Heir to Keld helps push out token spells as we attack (or not attack, if we so choose), Ezuri, Renegade Leader helps break up a defensive opponent, and Rhys the Redeemed can create or duplicate tokens as needed.

And just for kicks, old-school silly stomper and Magic 2012 returner Lure is here to muck up any of your opponents' ideas about blocking. What defense? We'll just go this way!

What Adaptive Automaton does for us is provide the pump effect we want most. If we have Ezuri and Imperious Perfect out, then choosing Elf seems like a sharp plan. Put Bramblewood Paragon and Lovisa Coldeyes out first, then our Automaton can come in as a Warrior. Whichever choice suits us best, Automaton can serve us well—and still benefit and be benefitted in kind.

Tribes without significant support can get pushed up a surprising level of power, too.

Unreal on the 4s


Once Magic 2012 releases, this is the kind of deck I'm looking forward to putting together. It isn't overly powerful, or even built to be a clever set of interactions (although there are a few in here!), but instead just straightforwardly features the latest tribe to be supported: Illusion. 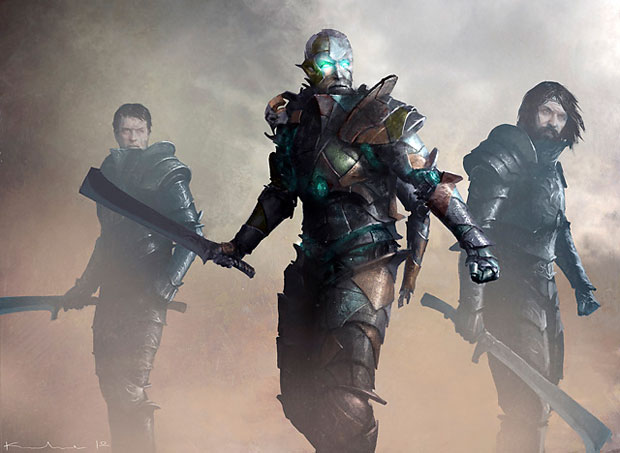 Lord of the Unreal makes the "easily falls apart" feature of most Illusions irrelevant through hexproof. Adaptive Automaton doesn't protect the same way that Lord of the Unreal does, but pumping Illusions on the whole while being one itself (without the "Illusion drawback) seems like a fair compromise. 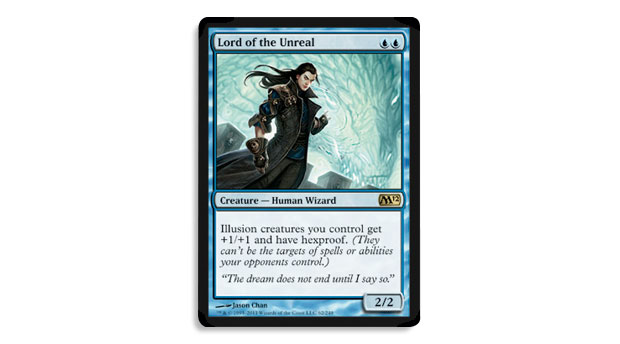 Magic 2012 is also bringing a slew of shiny new Illusion creatures, which you can scope out in the Card Image Gallery. While the new Phantasmal Dragon and Phantasmal Bear creatures are certainly a spicy options, it's Phantasmal Image that interests me most: if you can copy Lord of the Unreal with Phantasmal Image, you get a copy of the Lord that also grants itself +1/+1 and hexproof to boot. 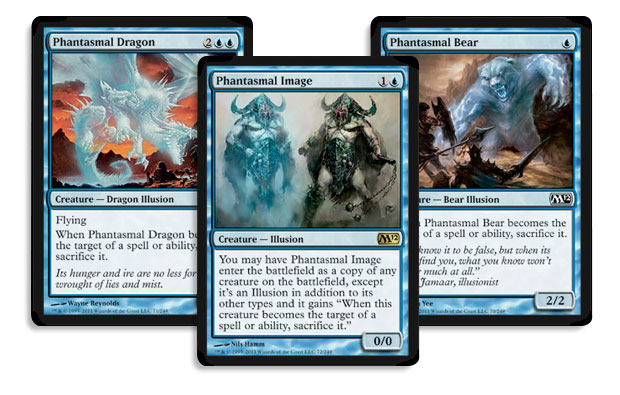 There's no illusion about how awesome that is.

The real treat I'd like to focus on, however, is that Adaptive Automaton is a lord for creatures that don't already have a representative lord. While Brass Herald and some combinations of tricky cards can grant the same effect as the Automaton, the feeling of actually casting a creature that is the creature type it's lording over is quite different. 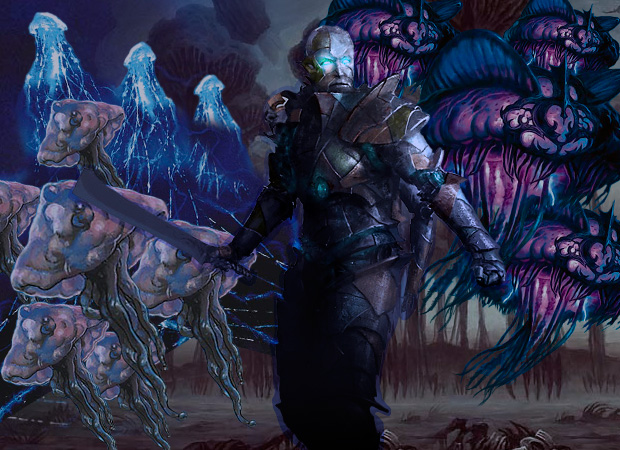 When I first saw our robotic commander, our stalwart (and Magic 2012–developing) editor Kelly Digges tipped me off to this idea through the example of Jellyfish. Yes, Jellyfish is a creature type and, no, they don't have a lord. In fact, Jellyfish usually aren't particularly exciting at all, since they're known to just float around doing a whole lot of not action. All seven of them.

Well, meet a Jellyfish deck that means to be mean.


How about those squishy, stinging apples? While the selection of Jellyfish is small, it's deceptively smaller due to the prevalence of the defender keyword. Since we need Jellyfish that can attack, I grabbed the ones that looked the most attractive for that: Esperzoa and Dormant Gomazoa.

Esperzoa is easy to deal with: small artifact trinkets are all it takes to keep this particular Jellyfish happy. Fabricate can find something exotic and powerful, like Sol Ring and Mana Vault, but Flayer Husk can be a surprisingly solid pick. In combination with Dormant Gomazoa and some mana, there are two neat interactions we can pull off:

Other Jellyfish fill in where they fit: Man-o'-War is the classic family representative, helping us to delay opposing creatures, and Avizoa is appealing (for a Jellyfish) even just as a 2/2 with flying, becoming a 4/4 in a pinch. Jellyfish lovers can't afford to be picky. Distortion Strike to keep the Dormant Gomazoa beats flowing, some card-draw spells, and a few handy lands round out the deck.

I hope some of you are planning to make the most of our lord of whatever! If you have an awesome idea or deck to share based around Adaptive Automaton, please post it on the forums or sent it to me by email. I may just share something particularly potent next week!

While blue took the blue envelope (ah-ha!) the distribution shared two things: plenty of us are spread all over the color wheel, and most of us have a color we really like. I did catch some of the discussion in the comments last week too, and I know that multiple colors and the complete lack thereof are appealing options to many of you as well.

It's fascinating that even the smallest or least-represented features in Magic have such ardent supporters, and I hope to see more colorless and colorful decks and ideas from your contingents in the future. You have been challenged!

This week's poll involves jumping through a bit of time-traveling.

If you're dead set on (or against) hitting up your local Prerelease this weekend, or just not sure yet, I'd love to know! Be sure to share what has you excited; sometimes it's something I hadn't even considered before that ends up becoming my new favorite thing!

I'll be at my local Prerelease this Saturday, July 9, showing at Dream Wizards in Rockville, MD. If you're heading out that way be sure to catch me! Otherwise, have a blast this weekend and we'll see you next week!