ast Friday's Return to Ravnica release overloaded everyone's hopes. We don't have to scavenge for booster packs from Prerelease prizes. It's easy to detain friends with a flash of packaged cards. Stores are populated with friends ready to rumble. The time to unleash our pent-up patience in the glory of shredded wrapping is now.

I want to talk about when the dust settles, after the draft, when there's nothing left sealed. To do that, we need to go back in time to the greatest four days in gaming, Gen Con. I already shared the new Maelstrom Wanderer Primal Surge Commander deck Gen Con wrought . Today is the story of what happened in the first game I played with it, and what Return to Ravnica means for the deck.

From the maelstrom to an ecumenopolis, we can wander anywhere with friends. 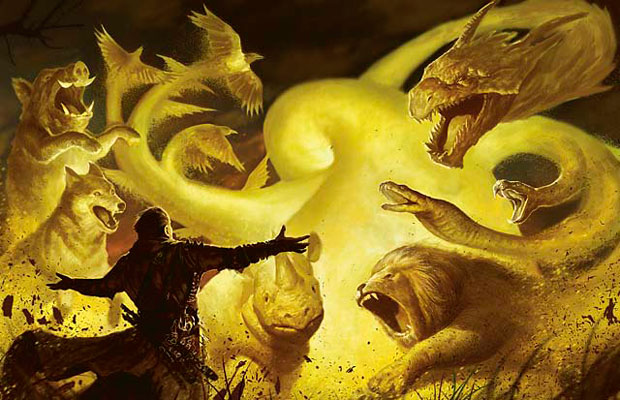 Up Beats and Beatdowns

Events like Gen Con have something for everyone, and my heart swelled with friends and gaming. From across the country, I was greeted by faces fresh and familiar, each packing its own set of wishes to be fulfilled. Fortunately, "Play Magic" was a common theme among some grinning gamers. Here's who was in for playing, in turn order:

Andrew Magrini (@a_magrini) is a Commander king right out of New York City. Going first and packing a Nin, the Pain Artist deck full of funky fun assured us the first game would be interesting.

Brendan Weiskotten (@bweisko) is an architect student turned writer and Japanese aficionado. Hailing from the "City of Brotherly Love" with Merieke Ri Berit was a contradiction in the making.

Greg Haenig (@uselessend) is an Ohio resident who loves unusual cards in Commander. While Tariel, Reckoner of Souls isn't so out there, his deck also packed an Anvil of Bogardan.

I went last, but as ringleader for the soiree of Commander it was good enough for me thanks to what I had just finished crafting:


Battling three other tuned and well-tread decks was a great way to see what I could change. 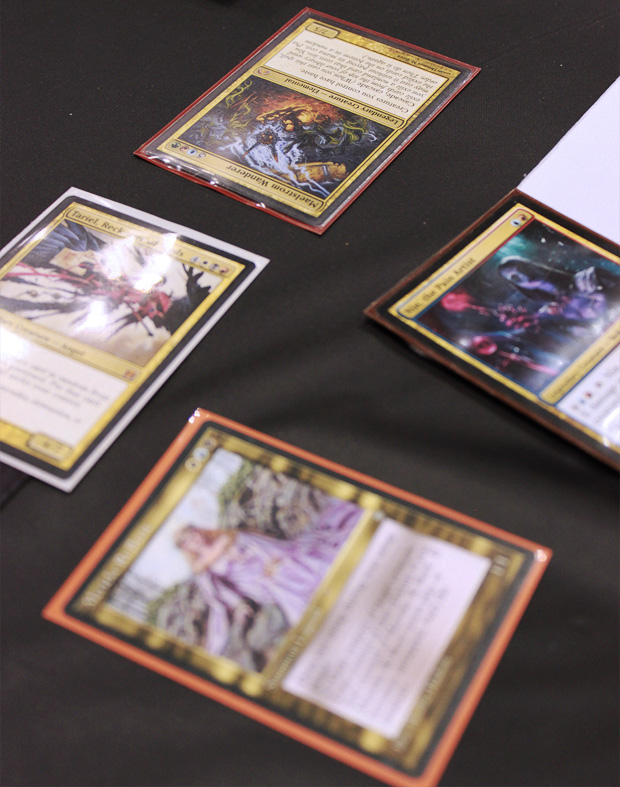 Our game began like most Commander games: Turns of lands being played. While none of us would whiff for some time, things did get interesting on the second turn:

By the fourth turn, things escalated:

The fifth turn is when the gloves came off: 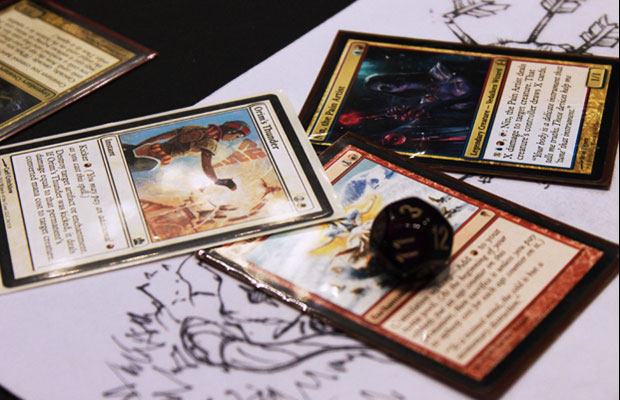 The game was afoot with everyone unloading their haymakers. Andrew made a face-down morph before his latest enchantment, Soothsaying. Brendan had a Mulldrifter of his own before using Elspeth to gain 4 life. Greg's ramping seemed endless with the addition of Gilded Lotus, which led to a Puppeteer Clique that returned a discarded Vesuvan Doppelganger that entered the battlefield as a Puppeteer Clique that snapped up a discarded Stormtide Leviathan. 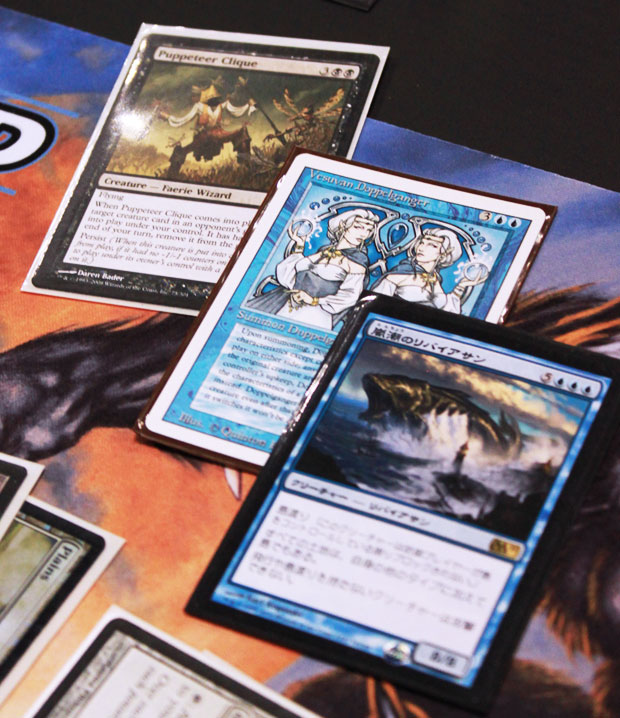 Questionable grammar of the previous sentence aside, Greg used the haste-laden Stormtide Leviathan to run over Brendan's Elspeth Tirel before being exiled at the end of the turn. However, Andrew's Unstable Shapeshifter remained as a copy of the great fish, leaving it up to me to solve the situation.

My answer was this simple sequence:

On Twitter, we'd add a #VALUE to that chain. For Andrew, he just frowned and used his turn to turn his morph—a Vesuvan Shapeshifter—face-up as Mulldrifter (Thanks, Brendan!) and attack me. Brendan played the reliable Volrath's Stronghold for his land before casting World Queller and Esper Charm, choosing to draw two cards. Andrew used a Twincast to get in on the card-drawing action.

Greg led his turn with Vish Kal, Blood Arbiter that ended up killing and dying to Unstable Shapeshifter the hard way. His Puppeteer Clique picked up Sword of Fire and Ice to slam Andrew, netting Greg an extra card and the death of the Vesuvan Shapeshifter-cum-Mulldrifter.

With my seventh turn I hit my magic quota of mana and cast Maelstrom Wanderer as fast as I could. "Cascade, cascade," baby! 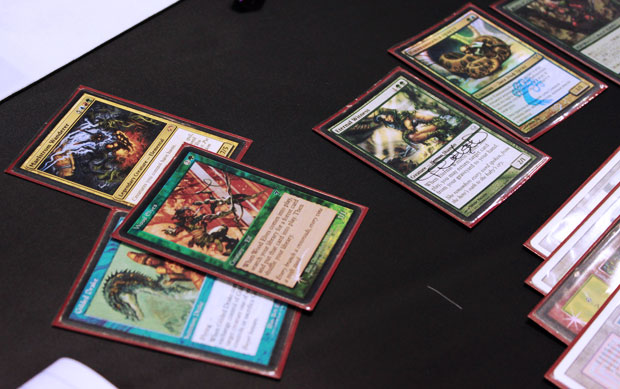 While Gilded Drake and Wood Elves aren't that exciting, stepping ahead in land count while swapping the Drake for Brendan's World Queller was. So was dealing some damage with my haste-laden army. Greg took the brunt of it, dipping to 25 with 7 Commander damage from Maelstrom Wanderer.

Andrew's business was all serious as he dumped his mana into activating Soothsaying. Brendan just poked the board with his flying guys before passing to Greg, who whiffed a Temporal Aperture activation (revealing a Mountain) and added Baneslayer Angel to the mix. The well-equipped Puppeteer Clique could hold the fort against most of my deck, so he kept it back.

Without much else to work with, the Craterhoof Behemoth for that turn's draw became my immediate play. Brendan, without hesitation, responded with Desertion. 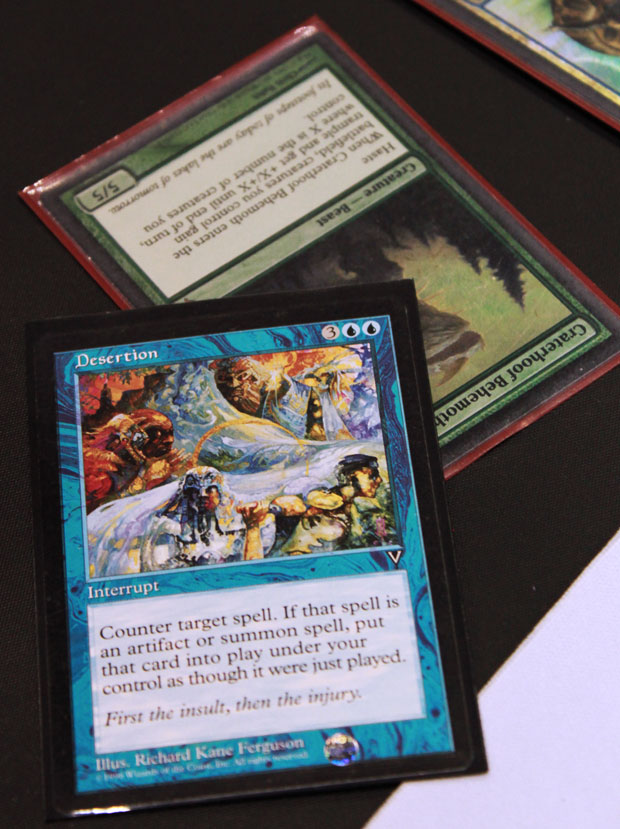 Since I had my just deserts, I took a stab at the only guy I could attack. Andrew untapped with less life and looked me right in the eyes when he played Dominus of Fealty. However, it was not to be as Brendan decided to set things back with a battlefield-clearing Akroma's Vengeance. 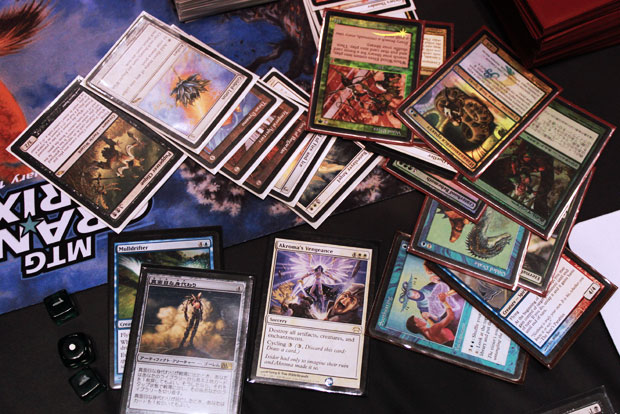 The picture says it all: Just about everything nonland was sent packing into graveyards. It wasn't a total joy for Brendan, who, after putting things into graveyards, asked aloud "Why didn't I attack first?" We chuckled as Greg's Puppeteer Clique persisted, and he decided that my deck full of creatures could go without a Genesis in the graveyard. His turn proper was just to poke Brendan to back under 40 life.

I drew my card for the turn quickly—no Avacyn Restored miracles here—but found myself staring at something very close to one: Primal Surge. A quick check of blue mana found everyone tapped out from all but the most specific and esoteric of counterspell options. I don't recall my words but everyone leaned in when I tapped all ten of my lands for it and asked if anyone could stop it.

Everyone looked through their hands and lands in play. That quick check confirmed that Primal Surge wasn't to be stopped. So I surged. 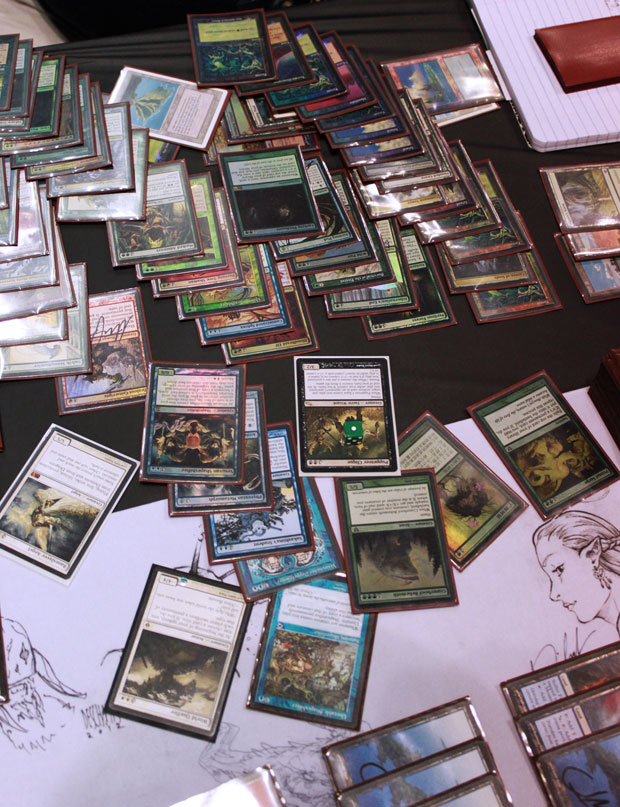 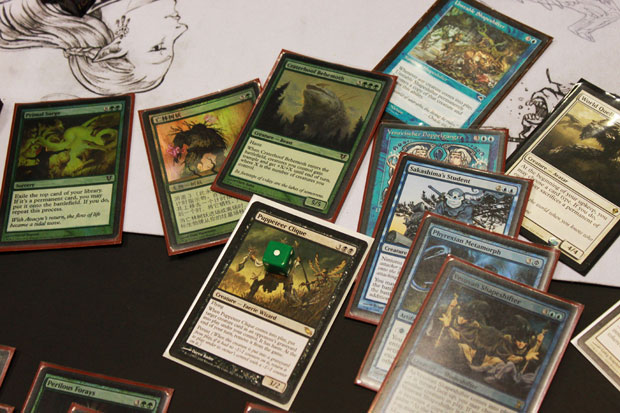 Getting to hit everyone with almost all of my deck for an Urzaton of damage (yes, that's a real unit of damage measurement) was the best possible outcome for its first game. In an uncommon showing, it's me featured in the victory shot: 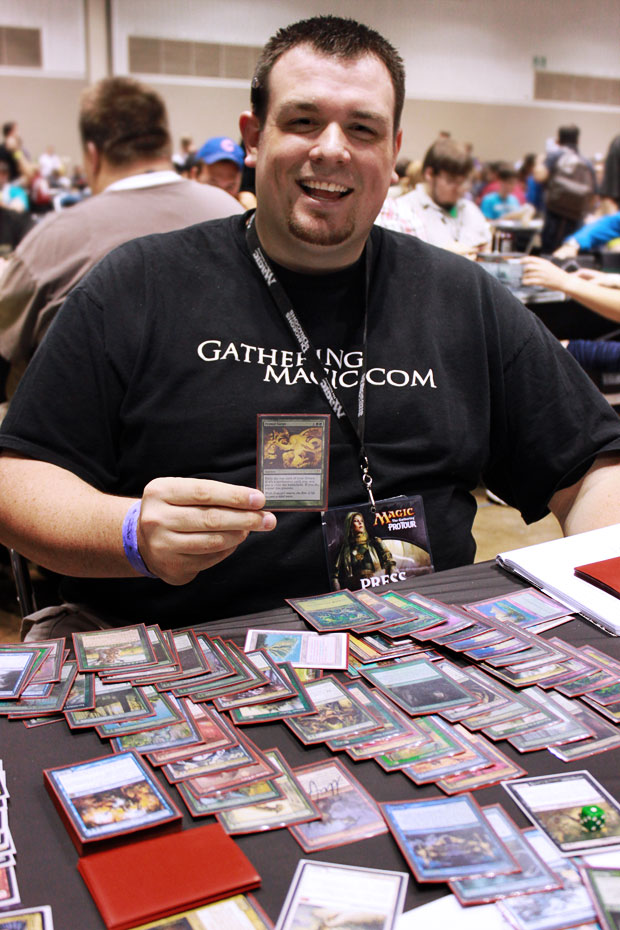 Since everyone had seen my deck, and knew it was without ways to force it to happen, we all had a good laugh at the ridiculous movement of picking up all but five cards of my library and flipping the rest over face up on the battlefield.

Gen Con really is the best four day in gaming!

There were more games over the long weekend with the Wanderer, and the results speak for themselves:

I landed a Primal Surge while at 13 life. Thanks to sharp removal of my sources of haste and my own Burning-Tree Shaman (limiting my ability to use Deadeye Navigator with Draining Whelk), the other three players had their turns to somehow deal me the last few points of damage. I won the game after untapping with just 3 life.

Despite casting Primeval Titan and Maelstrom Wanderer multiple times, my deck didn't deliver the firepower needed to marshal through a bevy of spells that kill everything. The Godfather of Commander is a merciless monster without peer.

Another game saw an Ankh of Mishra in play for an opponent on the second turn. It didn't take long for my life total to crumble from there since I want to ramp and play lands every turn possible.

While the first games were successful, that success was tied to drawing, casting, and resolving Primal Surge. When my deck "went off" it was elementary to succeed, but otherwise it's an innocuous theme deck for Commander.

With some effort and clever choices, digging down to Primal Surge wouldn't be that difficult. What I enjoy about the deck is the randomness that the odds are good I won't get to cast it. When it happened in games, everyone seemed to enjoy it. They understood that the odds were in their favor, and I was coming up big against the house.

To make the other non-Primal Surge games a little more exciting I dug through Return to Ravnica for new creatures to slip into the mix. Since we're making changes, this is the best place to note Primeval Titan is no longer a legal card for Commander. While how closely you and your friends choose to follow the suggested banned list is up to you, I use it as the rule since I run into all sorts of players from all sorts of places.

You can always count on my decks being legal. The question today is how to update Maelstrom Wanderer so it stays that way. Three Return to Ravnica cards came to mind.

Chaos Imps is the kind of "Dragon" I like. As a regular guy, 6 power with flying for six mana is right on par: It can block and do all the regular stuff I'd want for a big flying guy. But coming onto the battlefield from a cascade trigger (Maelstrom Wanderer) or Primal Surge means I can add the +1/+1 counter and maximize the instant haste something else will give it. Having 7 power with trample is something I should be attacking with every turn anyway!

Worldspine Wurm was my big suggestion when I previewed it, and it would serve as the biggest way for me to get into action. I can rest easy knowing it will be killed after I play it, but that I'll also get three fatties for my effort. Worldspine Wurm is a big guy, but that's something I think my deck should get behind.

Mercurial Chemister is the most oddball pick, but having ways to draw more cards and kill things with big spells I can't cast sounds like the Izzet ingenuity a combo deck like mine could want. I also happen to love Loading Ready Run, who was the crew to preview this guy.

Since this is the end of the article you can guess what comes next.

I'll reveal the pick next week when we're gearing up for the showdown in Seattle. See you then!