ince I started writing Casual Fun, the most-requested article topic has been Cube. It seems like everyone wants to know about Cube, read about Cube, or spread the word to the masses about the cult following that is Cubing.

A Cube is a set Magic cards, chosen by one person or a group of people. The cards are treated as their own Magic set. It is most often used to draft, but it can also be used to build sealed decks. While there are no hard and fast rules, most Cubes have only a single copy of any card and have equal numbers of each color.

With so few restrictions involved in what goes in a Cube, the variations between Cubes are huge. A standard Cube is seen as a set of at least 360 cards, balanced evenly among all the colors, with cards in each color (and artifacts) that allow for evenly balanced draft decks among the colors or color pairs.

Eric Klug has recently built a Zombie Cube. Matt Kranstuber has built a Combo Cube. Many people will build a Cube using just the cards they own, so there will be wild imbalances between cards.

I want to give everyone a more personal perspective, a better sense of the time and effort it takes to put together a Cube, but I have never built a Cube. Another player in my group, Josh Jenczyk, @jjenczyk on Twitter, has had a Cube for the last two years, so I asked him a few questions about his Cube and the efforts that went into putting it all together. For reference, Josh's Cube list can be found at cubetutor.com. 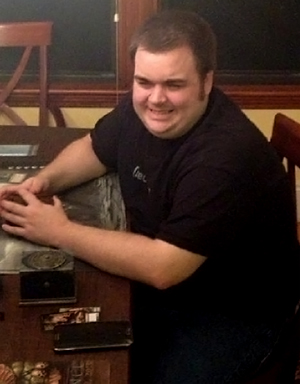 What inspired you to make the Cube?

Cube had been a format that had interested me for a while, and was one of the formats that our playgroup at the time wasn't doing much. I also wanted to have something that could help me and the rest of my playgroup improve our drafting skills. While it doesn't help with learning a particular draft environment, I feel that Cube can help a lot with more general drafting ability, especially Peasant Cube; I've found it to play out a bit more like a normal Limited environment without some of the more ridiculous cards that regular Cubes have access to. 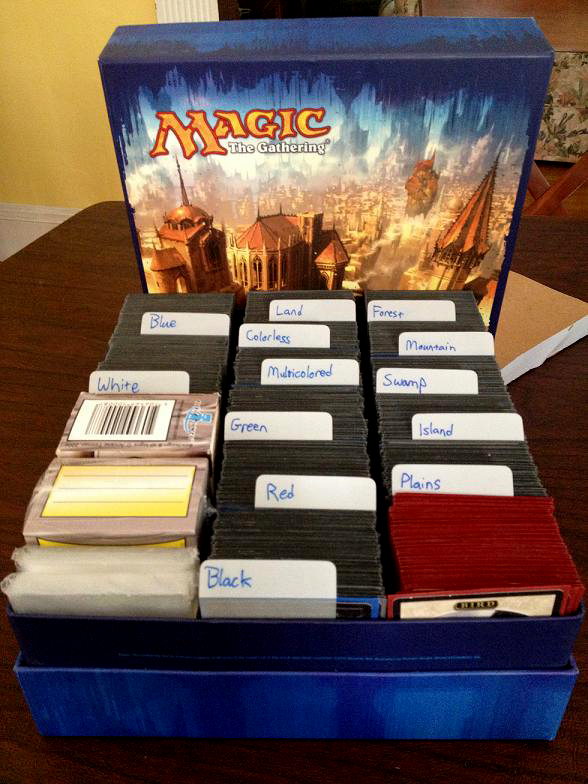 Why a Peasant Cube? Why not Pauper or regular?

When I first considered building a Cube, I quickly eliminated the regular Cube as an option. I wanted something that I could get put together and play fairly quickly, and the cost of a regular Cube beyond what I already had in my collection meant that building one would have taken several months to put together. At that point, I started looking at Cube lists others had made available online, and I found that I preferred Peasant over Pauper. Whenever you remove a rarity, there are types of effects that either effectively or completely disappear, and for me Peasant was the balancing point between cost and what types of cards are available.

How often do you get to use your Cube?

Never as often as I'd like. Currently I'd say my Cube is used about once every one to two months. The playgroup generally only plays Limited once a month, and if there's a new set out, or someone has a booster box they'd like to draft, we'll frequently draft that instead of playing Cube. 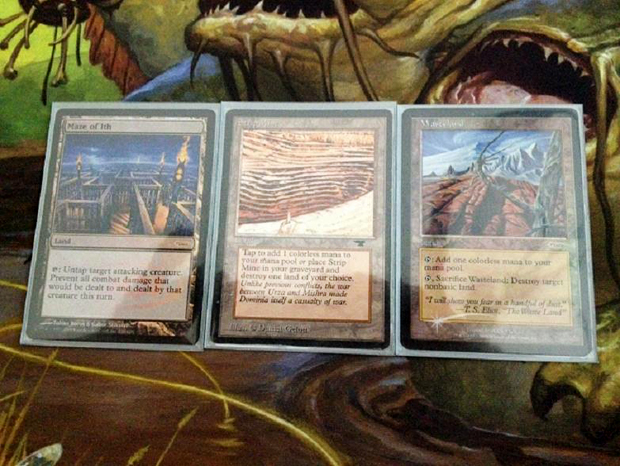 Do you draft and/or run Sealed?

Because the number of people playing in the playgroup on any given night can vary pretty widely, we play both Draft and Sealed, depending on how many people are playing. My Cube can presently support up to ten players for Draft and five for Sealed, so if there are six or more players we'll draft, and if there are five or fewer we'll either play Sealed or look at alternative Draft formats.

How often do you update the Cube? How much time do you spend tracking down cards and considering the balance in the Cube?

At this point, I'm reasonably happy with the state of the Cube, so I'm generally making changes as new sets come out, taking out a handful of cards to make room for cards from the new set. I also try to go through the whole Cube a couple times a year to see if there are larger changes that I should make or older cards that are a better fit than they were the last time I looked at them. 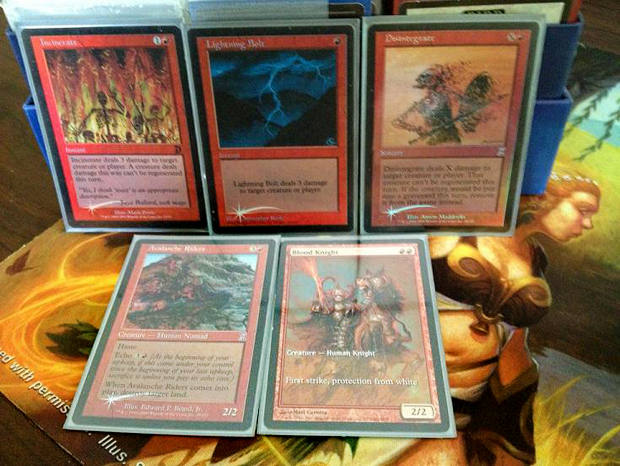 Did you have certain archetypes in mind when you initially built the Cube? What about now with the updates?

There are archetypes and styles of play I try to make sure are supported, although because the player count changes and I try to support both Draft and Sealed, I try to keep the archetypes more general, rather than try to support archetypes that need cards that other decks wouldn't want. So I make sure that Aggro, Midrange, and Control are all supported, and that play styles like Reanimator, Ramp, Burn, and Tokens are playable, but I'm not as concerned with including something like Storm. 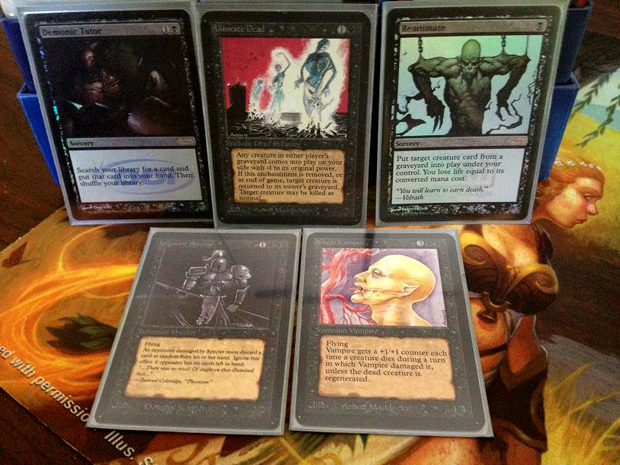 Your Cube has significant mana fixing. Were you looking for decks to be two- or three-colored? Was that something you actively considered when you built the Cube?

I think supporting two- and three-color decks is very important, especially since I'm trying to support Sealed as well as Draft; while drafting a monocolor deck is frequently feasible, it's almost impossible to play only one color in Sealed. I also want people to be able to play their cards; a game where one of the players is just unable to play more than a couple of his or her cards is frequently not fun for either player, and virtually never fun for the player looking at a hand full of cards he or she can't play. 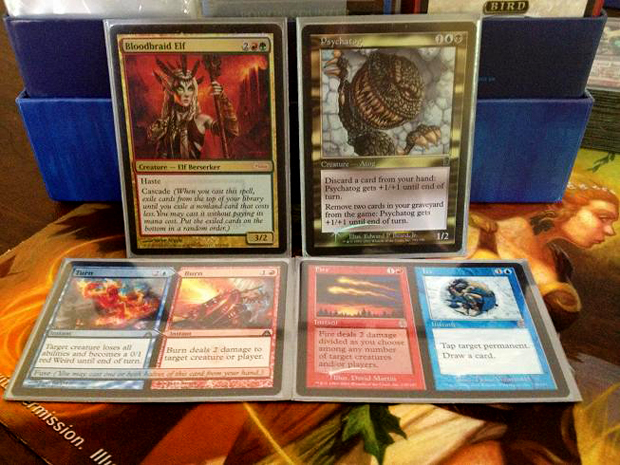 Your Cube is pretty blinged out. How did that start? Which was the most difficult card to get?

For a long time, I avoided including foils in my decks; I didn't like the look of only having a couple foils in a deck made up mostly of non-foil cards, and I was frequently changing my decks, so it didn't make sense to hold on to foils when I could trade them for a non-foil version of the same card as well as extra cards. Early in the process of building my Cube, I decided that once I was happy with the overall construction I would start looking for specific versions of those cards—in most cases foils, but in some cases I was looking for a specific art or for an early or original printing of a card, such as an Alpha Psionic Blast or a Beta Hypnotic Specter. 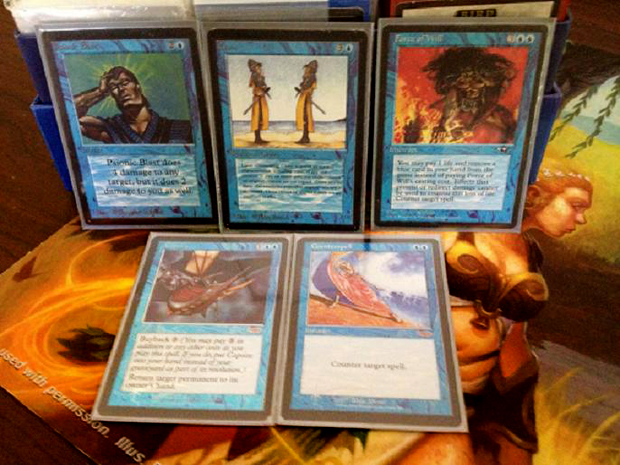 I think some of the more difficult cards to find are also some of my favorites; in some cases that may be a Judge promo (Lightning Bolt, Maze of Ith); an FNM or Player Rewards card (Wasteland, Swords to Plowshares); and, probably my favorite, a Serra Angel promo which was offered in 1999 when Wizards of the Coast had their own online store, as a bonus to those who bought a booster box of Mercadian Masques. This version of Serra Angel is the only foil printing with the Douglas Schuler art originally printed in Alpha, and is something many people don't realize exists in foil. 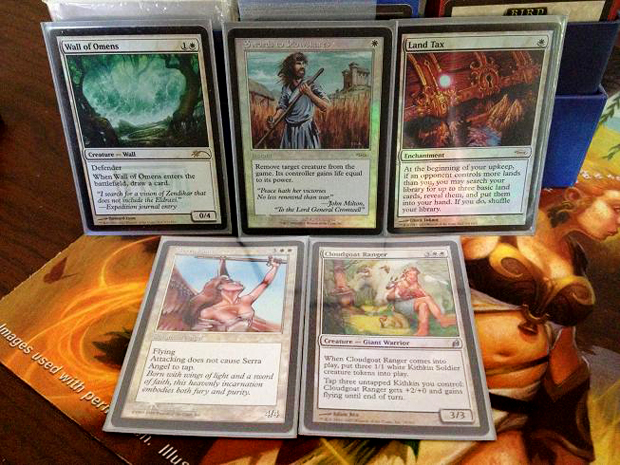 Will Modern Masters change your Cube?

There are a few uncommon cards that were previously only printed at rare that I'll be looking at adding to the Cube, the most likely of those being Feudkiller's Verdict, Masked Admirers, and Epochrasite.

You have included a token card for every possible token the Cube could produce, in sleeves that are a different color from the cards in the Cube. Which were the most difficult to find?

Aside from those which have not been printed by Wizards (I would love to see an Assembly Worker token printed), I'd say the most difficult two would be the 2/2 green Bear token for Grizzly Fate and the 1/1 green Squirrel token for Squirrel Nest. The Bear token has only been printed twice as part of the Player Rewards program, in 2001 and 2003. The Squirrel token has only been printed once with power and toughness on the card, in the 2002 Player Rewards, as well as a printing in Unglued which did not have the name or power/toughness. 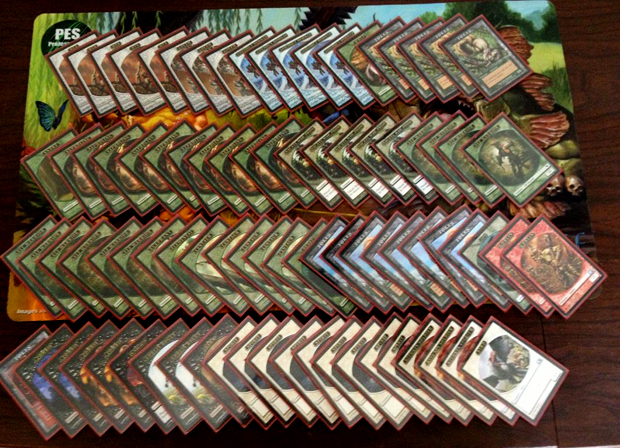 How difficult was it to put together a Peasant Cube? I know many of the cards in the Cube are not easy to find.

There are a handful of older cards in my Cube that are difficult to get, either due to age (Berserk, Maze of Ith) or to play in other formats (Force of Will, Wasteland). With those included, my list is somewhat difficult to put together from scratch, but replacing ten to twelve of those difficult-to-get cards can make things much easier. Keep in mind that you're talking about 450 cards, so getting even a Peasant Cube together will take a lot of work. 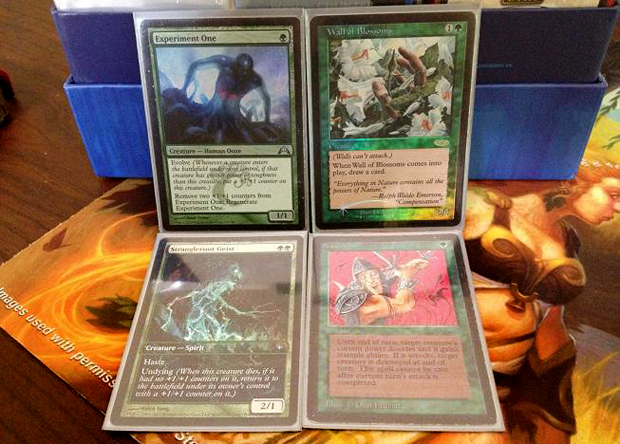 You're building something that an entire playgroup can enjoy over and over, so working together as a group to get the cards is a great option for those who might not have the resources to put together a Cube by themselves.

Another thing to keep in mind is that you're almost certainly going to want to keep the Cube sleeved, as well as having enough sleeved basic lands for all of your players, so for a 450 card Cube you're going to need about 700 sleeves, as well as having spares in case a sleeve gets split or bent and needs to be replaced in the middle of a draft, so it's important to factor in those costs too.

What sort of recommendations do you have for someone looking to start a Cube?

The biggest thing I would recommend is to research and take advantage of the work and writings others have put into the format; there are a lot of great articles, podcasts, and complete Cubes online, and chances are that no matter what you're trying to do someone else has tried something similar and written about what worked well for them and what to avoid.


Josh recommended several writers and websites for those of you looking to build your own Cubes, but aren't sure where to start:

I recommend following each of them. I've yet to meet anyone involved in Cubing who didn't enjoy talking about it. I'll be looking forward to my next opportunity to Cube Draft with Josh's latest updates!