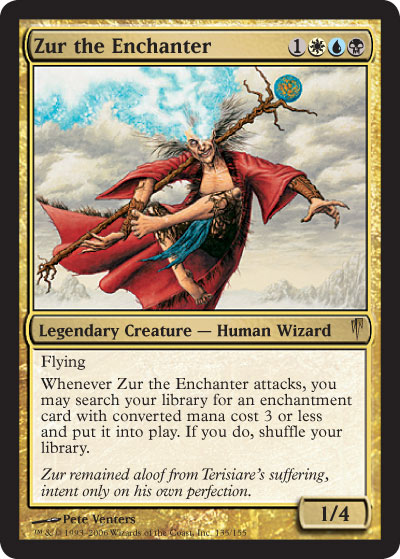 The best part is, the readers who are only here for the preview card will leave now, and I don't have to deal with them. (This is how crotchety old men think. You damn kids and your preview cards! Get on outta here, before ah git mah shotgun!)

There is only one question to ask when building a deck with Zur: what enchantments will you pack?

One question, thousands of possibilities. Zur is a terrific "Johnny" card, and I'd like to try to do it justice today by listing a wide range of cool possibilities. None of these are going to win any tournaments; we all know that. But that won't stop people from posting to the message boards to say so, ad nauseum. So as a public service before we start, I've give you the following super-smart quote you can use to copy and paste in the forums:

Zur is a great card. He is not a powerful card for tournaments. But that has never been the point of this game, and I pity the lost souls that stop their analysis there.

But I don't pity them enough to spend any more time on them. Let's move on.

Because of the huge potential, I've narrowed down the choices for this article considerably. First, I ignored red and green. You want to play red and green with Zur, go ahead. It's certainly possible, and there are some great choices. But I'm not going there today.

So – choosing from the universe of Zur's three colors, here are four broad directions you can take.

Probably the first priority in a Zur deck is making sure Zur isn't too easy to kill. He's already four toughness, which is nice. And as a black creature, he's exempt from a lot of black spot removal. But there's always another trinket you can put on top, and Zur's armor will be no different. 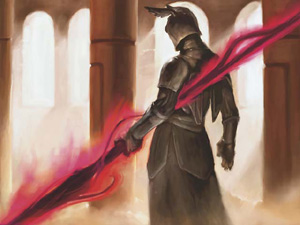 My first two choices would be recent enchantments: Shielding Plax and Shadow Lance. The Plax, because it's one of the best auras ever printed, and a Zur deck might be tricky enough to trigger multiple comes-into-play opportunities. The Lance, because 3/6 is better than 1/4, and 5/8 is even better. With Zur getting cards into play simply by attacking, the

Here's an interesting boutique trick: Angelic Renewal. This used to be one of my favorite cards; it's a great way to tell the board the next creature of yours that dies, doesn't really. (So the next turn, you can fetch Planar Collapse.)

Two other enhancements worth consideration: Sleeper's Robe and Flickerform. The Robe, because Zur obviously wants to attack and it would be nice if he didn't keep running into really big dragons. The Flickerform, because there are such things as black dragons and you'll still want to attack into them. Note the Flickerform/Plax synergy, if you're using all of these in the same deck.

Some very scary things can happen if you pick the right enchantments. Zur can change the battlefield in an instant – growing creatures here, destroying creatures there, and making others shift allegiance.

The most straightforward trick is Arrest, which simply removes the flying blocker (or anything else) that stands in Zur's way. A similar (but not quite as helpful) move would be Mark of Eviction, which would be more geared toward keeping a large, groundpounding creature sick and not counter-attacking.

You can also gain creatures on your side, instead of neutralizing others. How about Animate Dead, or Legacy's Allure, or Opal Caryatid.

Once you have creature advantage, you can maintain it with boutique tricks like Coalition Flag.

Of course, Pillory of the Sleepless is a victory condition, and Seal of Doom can get rid of creatures outright. But I'll finish this section with two finesse choices. Threads of Disloyalty can pick off a small, efficient creature (like a Simic Guildmage) and bring it over to your side. And my favorite idea is a three way tie: Genju of the Falls, Genju of the Fens, or Genju of the Fields. These enchantments create additional creatures that you can then enchant with Zur's ability during the next combat phase. (Don't let it worry you that the new enchantment will eventually fall off. That's why you'll be using Chime of Night.)

I'm going to keep this section short because they involve combos, some more dominating than others. But I can at least admire the combo player for getting his tricks via the combat phase, for once.

Most of these are well-worn. I'm just reminding you of those that cost 3 mana (or less) for each part.

Here, it's just about finding quality cards. There are plenty of three-mana enchantments worth looking into – Ghostly Prison, Haunted Crossroads, Oath of Ghouls, Promise of Bunrei, Halcyon Glaze, Parallax Nexus,Standstill, Words of Waste (or War, or Wisdom), and a variety of other quality cards. Don't forget single copies of smart metagame choices like Aura of Silence, Back to Basics, Vile Consumption, Planar Void, and so on. Aura of Silence is particularly helpful against the banes of Zur's existence: Psychogenic Probe and/or Aura Flux.

And The Winner Zurly Is…

If you really want to build a flexible enchantment deck, Copy Enchantment is essential. It does in a Zur deck what Clone would do in a normal creature deck. Don't let Zur leave home without it!

Anthony Alongi has been playing various Magic formats for over eight years, and has been writing for much longer than that. He writes the JENNIFER SCALES book series with his wife, MaryJanice Davidson.