The Izzet Strike Back

ultiplayer is an animal worth wrestling. There's no other way in Magic to play with several friends simultaneously. Whether it's tall stacks of cards in Commander or forty fancy-picked cards constituting a Draft deck, multiplayer is where good plans shine brightest.

And since so many of you are excited for the Izzet to return I decided to take this week to speak from their perspective, mixing the intelligence of engineered action with the passion of blowing things up. If we're going to "turn it up to eleven," I hope we've put in the work required to keep it from taking us out with it (which will happen from time to time when we first test things).

While the eight rules for multiplayer Magic are helpful for seeing things through the eyes of multiple enemies, how that works out for each of us is a little difference. Today, we'll walk through looking at planning for multiplayer with a decidedly red-and-blue theme.

This means that I'll touch on technology and power—specific cards and effects that are flavorfully useful, as well as explaining why some cards are what we're looking for. Unlike an Azorius battle plan, which would be built on methodical suppression and rule creation to impose order on everyone else, our Izzet line of thinking produces excitement, explosions, and change, even if we're still putting our thoughts into things upfront.

And, of course, there's a Return to Ravnica preview in here as well. You won't miss it when we get there. Trust me. (For simplicity's sake, check out the other awesome Return to Ravnica action in the Card Image Gallery: I'll be making many references to new cards you can soon use yourself!) 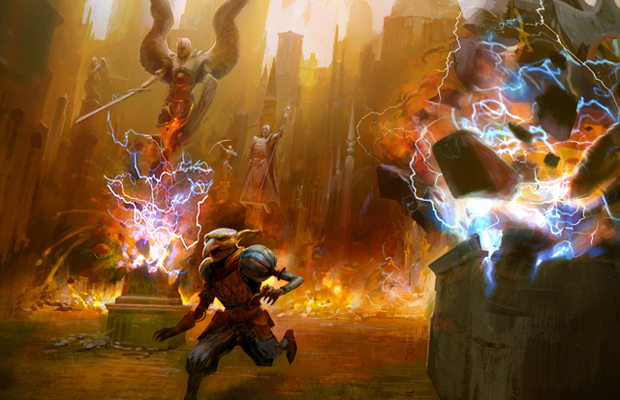 Great thinkers all agree: Knowledge is power. What you know is often more valuable than you realize, as any Dimir would kill you for sharing. The Izzet do plan ahead, if only as far as their passions lie, and gathering information is always required. While the Dimir might steal it through unseen observation, and the Simic might methodically catalogue it, the Izzet are much more direct in taking observations.

The quietest part of any multiplayer game is usually the first few turns. Lands, mana-making spells, and general resource growth are the usual suspects. Direct, aggressive action is uncommon, since it's rare you want to be the villain from the start. If you're looking to maximize your plan's success, figuring out what everyone else is up to is vital.

There are a few spells that help us do this:

Some opponents will always share precisely what's in their hand: Honesty is part of their plan, too. For your own safety, and for everyone else being uncooperative, checking hands lets us engineer on the fly. But there are other ways to understand what an opponent is up to. 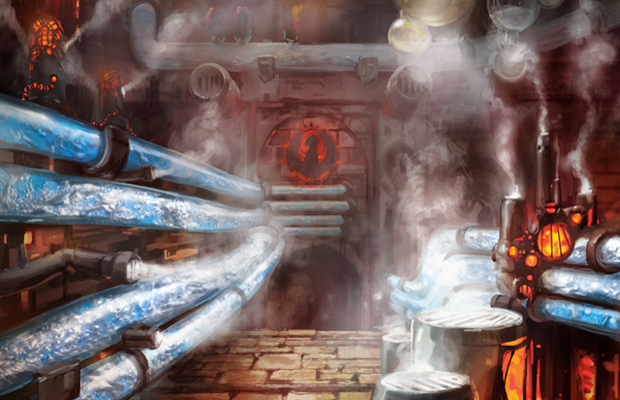 Whatever you have planned requires power. The same holds true for opponents. Artifacts, overflowing lands, and creatures that generate mana are hallmarks of multiplayer action. The question isn't "Will opponents play these?" but "What will they do without them?" Making opponents react to power loss is an effective way to force their hand.

Making people act now is the entire point of using spells like these, sadistic inclinations aside. You're not Rakdos, are you?

When you make others react to your plan, you can plan to plan for that. You can call it going deep, but in multiplayer the result is often far more chaotic. Just because you cut away artifacts doesn't mean the business end of the next one cast won't be leveled at you. This means you want to be planning to plan on the move. 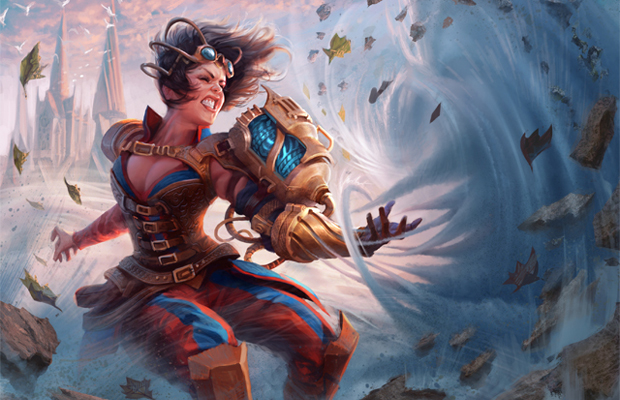 Lessons From the Mire

Multiplayer is ugly. The variety and intensity of everyone's actions create a swamp that can bog anything down. The problem isn't the swamp of players, as some might first think, but your ability to use force for full effect.

Believe in your tools, and make sure you call upon some good ones:

Prior planning prevents poor performance, but planning to plan on opponents' plans is pure Dracogenius. Just because you know games will go awry doesn't mean you can't experiment on things along the way. Letting your opponents supply components is part of the fun (and easier to tune if you're probing them for clues). 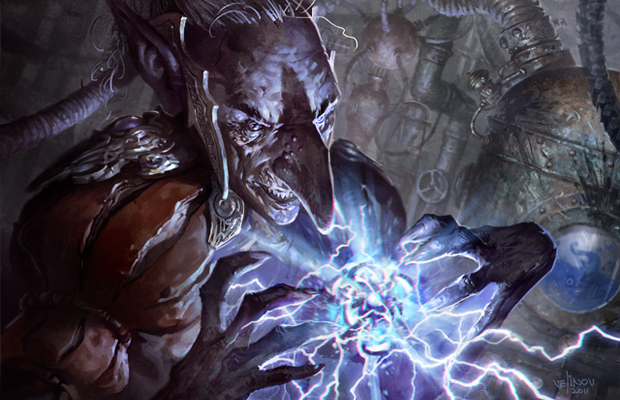 Giving in to the Power

Plans need not be subtle. While working ahead to be ahead is a fine way to break down multiplayer, there will always come a time when true power is needed. Moving from a side role, manipulating your things, into the power position wielding true power is exactly how the Izzet end a battle.

Their new mechanic, overload, is precisely this tipping point. Check out Mizzium Mortars and Street Spasm.

Both of these have an initial mode that makes short work of one thing. Mizzium Mortars kills all but the toughest of monsters; Street Spasm is an almost-Heat Ray way to take out something offensive. Each of these can be dialed up to unleash incredible power against everything that isn't yours. Today's preview is exactly this same deal. :

Cyclonic Rift is exactly the type of card Izzet multiplayer can use best. It's almost Disperse, except it only messes with opponents' things. Early in the game it can slow someone down, probe for their reaction to bouncing, or even break up something awesome before it has the chance to crash into you. Its normal mode is perfectly suited for everything Disperse could do to opponents.

When you overload it, though... damn. It isn't Upheaval—a more troublesome cousin from a very different time in Magic—but it feels just as powerful. When you're stuck in the mire, or an opponent's plan is about to fully unfold, Cyclonic Rift resets everything of everyone else's. And let's be explicitly clear here: 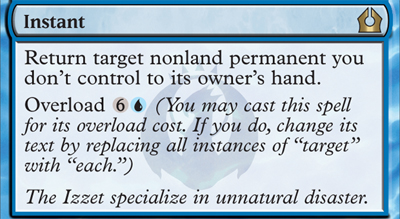 Cyclonic Rift is an instant. You can, when patience is the better virtue, wait until the precise moment before overloading the awesome. Seven mana isn't cheap, but for what you can do it's priceless:

This is the secret sauce for Izzet multiplayer: Going over the top for the kill. When you know what everyone is doing, and how they're going to do it, resetting their things puts you right where you want to be! It doesn't matter that Dragons are coming back, as you can now plan for them better than before.

And if you've planned accordingly throughout the game, they won't be able to catch back up before your plan proves the greatest. 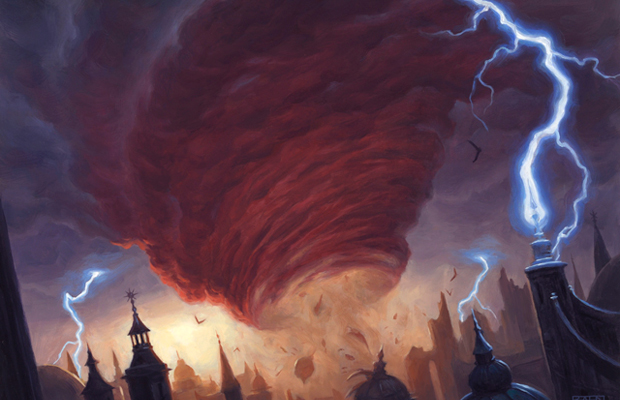 Being excited to see the Izzet again doesn't mean you're necessarily one of them. So I asked for clarification after taking the Guild Quiz to tell me with a guild poll:

While I hoped to see more Boros out there, Izzet taking almost 20% alone is pretty stunning. In fact, more than half of you answered that some sort of blue-tainted guild is where you belong. Just remember: The Boros Legion will always be there to maintain order, whether you like it or not.

And if I have to wade into the fray imposing order, I can promise that you won't like it. Trust me.

This week I'd like to ask something that might give even the greatest lovers of blue pause.

This is less about popularity—it's obvious that Jace has his fans—than style: Using newfound allies is always fun, and knowing which you want to see in action can tell me where I should steer some attention.

Of course, I might just pick the opposite if it suits my plans best. But I'm sure you already planned for that, too. Join us next week when we go even deeper. See you then!