A Journal For The Birds

Author's note: I found this journal not far from a coastal tower. There was no body nearby, but there was an awful lot of frustrated ogrish slobber all over it. What I found most fascinating was the progression both of the author's frustration, and his artistic aptitude. I'm not sure what this means, but I think if he's still around, he has a bright future working with Matt Cavotta.

Look, Oog draw picture to show how much Oog like. 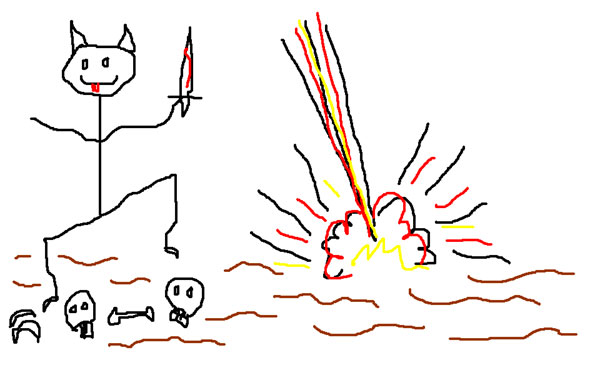 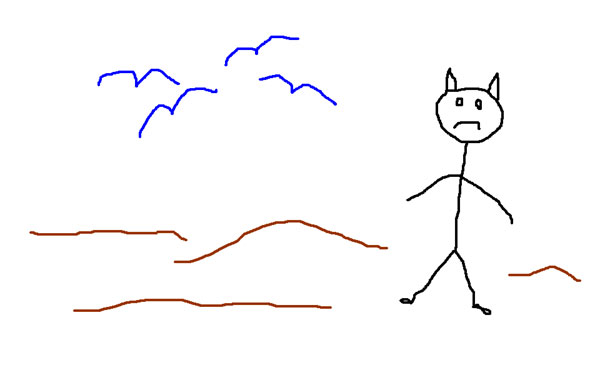 Boss say tomorrow try something else. He Dragon Roost work better than birds or ball of fire anyway.

Day 672: Something very wrong. Boss get no roost, just birds.

Then Boss do lots of different things – Drain Life, unfurl Coat of Arms, even light Plague Boiler – but only get dumb birds. 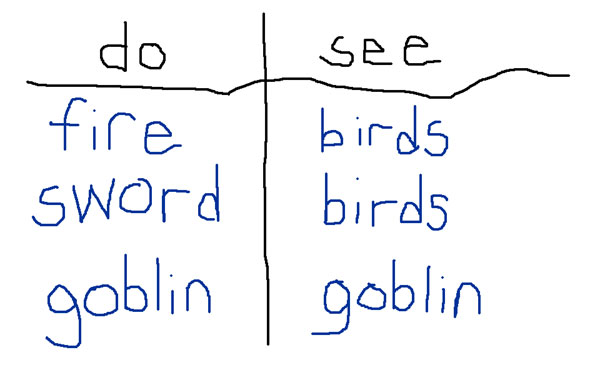 Oog not sure. Birds fly. Birds sing, too. Pretty birds.

Not all bad. Oog have time, practice drawing. Here bird: 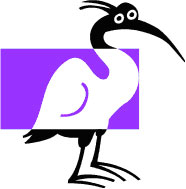 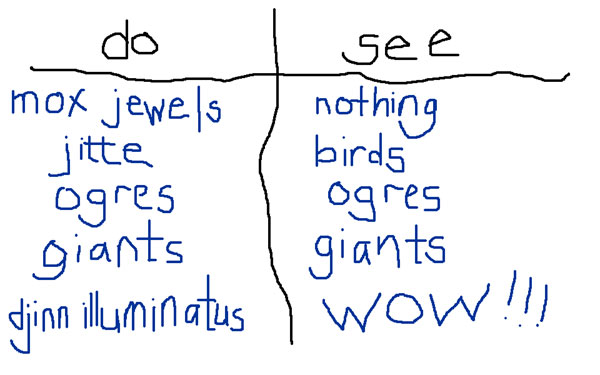 Boss army have some ogres and giants now. Good fighters, but not lots. Not good flyers. Enemy good flyers. Sheesh, cats that fly! Better than birds, or giants, or ogres. Maybe enemy use strategy? Oog scared! 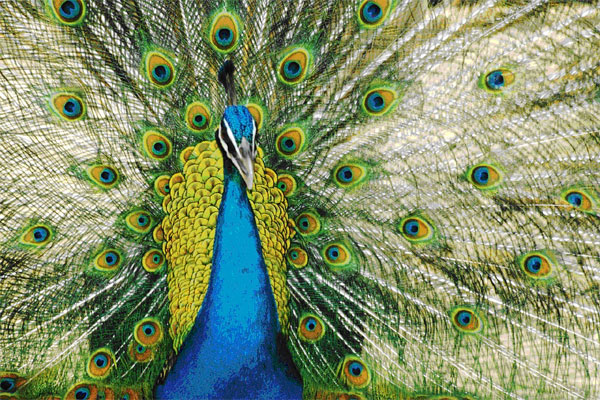 Author's note: here, several dozen pages of the journal had been torn out.

Day 897: Where do I start…and how? My mind and body have passed through dark and light, the dreary and the sublime. I have emerged transcendent, like a newborn from the birth pains of a universe both loving and cruel.

As the detail-oriented reader will notice, nearly 150 days have passed since my last entry. In that time, the war with the Enemy has gone badly, and morale has deteriorated steadily. I myself have deserted, finding no further satisfaction in our cause. Instead of advancing the machinery of war, I have determined to devote my life to the cause of reducing the airborne pollutants left in the wake of so many failing sorceries involving fire and smoke.

Also, there's a lot of bird crap all over the place, and that can't be healthy for anyone either.

I have removed many of the more recent pages of this journal, since they go into deeper explanations of what works against the strange magic the enemy imposed upon us all – I guess it must have been that night my good friend Rgk and I saw the shining, enchanted rain. I do not want this knowledge to fall into the wrong hands. I want this war to end.

(Rgk, incidentally, is no more. In deep frustration, he charged the enemy lines, and was set upon by an enormous flock of rabid toucans. It was a gruesome, albeit colorful, way to die.)

While I will not aid in the overthrow of this strange magic, I will thank its creator for giving me the gift of time. With only a small army to his cause, my former Boss was too dependent upon the workings of sorceries, artifacts, and enchantments. None of these worked against the enemy's enchantment – and as the reader doubtless knows, the magic of mountains and swamps has virtually no answer for a strong enchantment.

So all we ever got was birds upon birds. The djinn was a brief glimmer of hope, but it took a great deal of effort to keep this tactic working. And while his copies of spells worked as if nothing was wrong, they also produced no birds.

Perhaps a larger army would have helped achieve victory; but the enemy was well-prepared, and it might not have made much difference. They had massive flyers, including those strange cats from the clouds. They also had powerful, Ghostly Prison to prevent too many of our own birds from attacking. And of course, there was the priest I saw: that pontiff from Orzhov. He was just outright mean.

Just before my desertion, I heard tales of outrageous abuses of this bird-generating Magic. I do not know which of these are true, and which are the fabrications of paranoid minds:

In addition, I have Poisonbelly Ogre who showed great interest in defecting to the other side. Perhaps he did and found happiness there.

I have also heard tales of magic that ignores this enchantment's powers of prevention. Perhaps there even exist Boseiju, Who Shelters All, and a spell cast would both succeed and create birds in its wake! And there may even be Obliterate virtually everything in sight, including the birds it creates. But even such a sorcery could not possibly shatter the enchantment itself, I think.

Finally, in my travels I have found bosses capable of influencing the battlefield without actually casting any spells. I fear to say too much; since as I said before, I no longer see eye to eye with those who would try to destroy or circumvent this magic. However, I can reveal hints of the following:

In any case, I continue to be in awe of this amazing enchantment. I have, in fact, devoted my best artwork to it, and I have adorned the picture with text that explains its mystical powers.

Such a chef d'ouevre deserves special protection from prying eyes, so I have locked it away in another dimension.

I deeply pity the next boss coming from a mountain or swamp – or from anywhere, really – who attempts to overcome its raw power, stunning grace, and pure elegance. And while an ogre like me should probably hate something so gorgeous, I am grateful for the gift given to me in this war: the gift of time. It has forced me to rethink my approach to how I fight, and how I live. By insisting that I be more creative, it has helped me – a lowly, stupid ogre – to achieve incredible things in the arts, and to pursue passions beyond smashing things. Too many of us ogres, and those who control us, depend on a single dimension to get what we want. What better lesson to learn than the one of adaptability?

Others could probably learn this lesson, too. I will go out in the world and tell them. You know, while taking care of that whole pollution thing, too.

It is strange – I can remember being so confused and fearful those first few days under this enchantment; but now I cannot imagine life without it. I doubt anyone else will be able to, either.

Anthony Alongi has been playing various Magic formats for over seven years, and has been writing for much longer than that. His latest book, JENNIFER SCALES AND THE MESSENGER OF LIGHT, releases June 2006.