"The riskier the road, the greater the profit"
—The 62nd Rule of Acquisition

ome corners of the Multiverse are civilized and orderly. On Bant, you'll find well-tended fields and coastal cities. On Mercadia, political and economic power rest almost entirely with the denizens of Mercadia City and the merfolk metropolis of Saprazzo. And on metropolitan Ravnica, only traces of the natural world remain, squeezed in between looming towers. 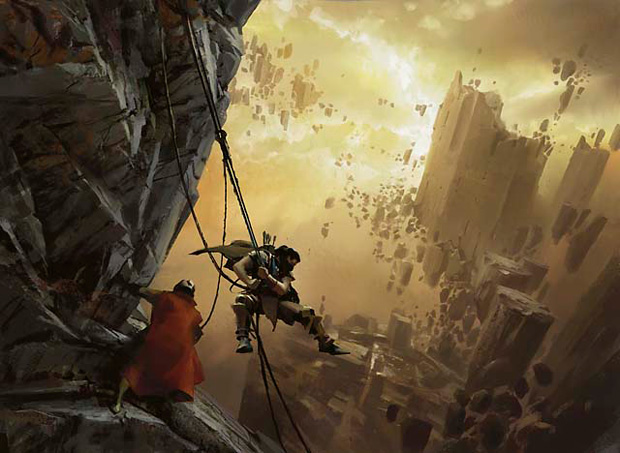 Zendikar is not one of those tidy places. Its landscape is chaotic, littered with ancient ruins, strange vistas, and the ancient stone formations called hedrons. Nor is it a verdant, primeval paradise—it's filled with deadly traps, vicious predators, ruthless vampires, and numerous hazards of weather and geography.

Grab your trusty machete, your climbing gear, and a map. It's time to explore the world of Zendikar.

As dangerous as Zendikar can be, there are ample rewards for those who brave its rigors. Case in point: 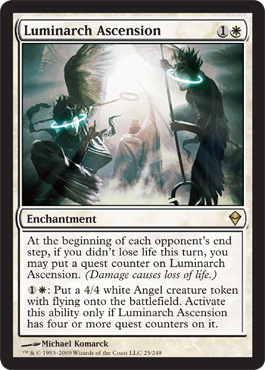 ... So, I'll be honest, the first time I read Luminarch Ascension, here's what I saw:

There's got to be a catch, I thought, because that sounds crazy.

When I went back and actually read the rest of the card, I discovered that there is this little hoop to jump through before I get those bargain-basement Angels. Well, not a hoop, really; more of a ... quest.

You see, not just anyone can summon angels at will. To unlock that kind of power, you've got to do a little extra something, to prove to the angels that you're worthy. You've got to go on a quest. Your mission: to not lose life.

"Great!" you might be thinking. "I was planning on doing that anyway!"

And indeed, if you have four opponents, it only takes one damage-free trip around the table to open the Angel floodgates. If you're able to cast Luminarch Ascension on turn two, there's a good chance you can get it powered up while everyone's still saying "Land, go."

On the other hand .... When you cast Luminarch Ascension, you are giving your opponents a sort of quest of their own: to keep the pokes and pings coming, every turn, to keep you from cresting the summit of Angel Mountain. 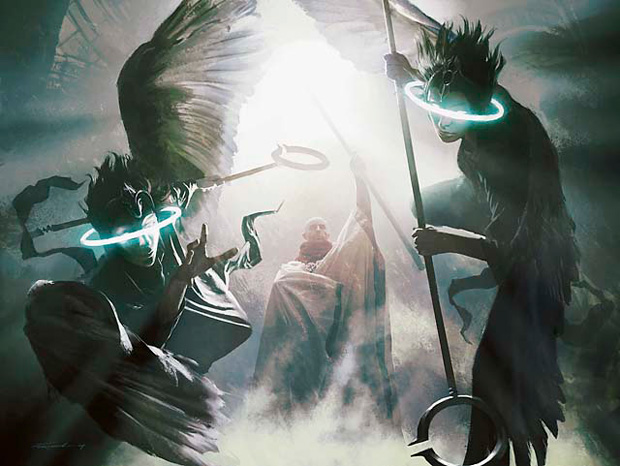 Again, in the early turns, they may not even have the ability to damage you consistently. Sure, somebody probably gets a point in with Llanowar Elves (instead of ramping up their mana ....), and maybe somebody else aims a Lightning Bolt at your face (instead of at a vital creature later ....), but if you start your Ascension on turn two, you're in good shape. Even if you don't, not everybody will be able to damage you, and anyone who doesn't fear a stream of Angels (say, a person holding Planar Cleansing) may not even want to. But they may be willing to let you run rampant over everyone else for a while, all without casting another spell.

All the same, have no illusions: Luminarch Ascension will get people's attention. And gaining life won't help you on your quest—if you lose 2 life and then gain 2 life, you still lost 2 life this turn. Them's the breaks. It may not always be an easy road, but there's an endless stream of two-mana Angels waiting at the end ... and four turns really isn't all that long. Let's get started.

Only You Can Prevent Combat Damage

There are a few things we might want to pack if we want to preserve our life total for those few critical turns. We can't do anything about cards that make us lose life directly (Acolyte of Xathrid or whatever), but there aren't that many of those. There are a few ways to keep direct-damage spells out of our hair. But the main thing we're going to need protection from will be creatures.

There are some early defensive creatures that we can put it in the way of would-be attackers—Wall of Hope, say, or Tireless Tribe, or a good pointy Razorgrass Screen. If you start early, something like that could be enough to keep the little guys away.

You won't always get started early, though, and you may not need the help when you do. For later in the game, you can discourage opponents from attacking you with cards such as Aurification, Ghostly Prison, and Hissing Miasma. If you go the white-black route, you could punish them further with Dread (or its old-school, non-attacking-for-6 granddaddy, No Mercy). But my favorite of the bunch is Michiko Konda, Truth Seeker. She comes down early, and she punishes any damage, not just damage from creatures, at a pretty steep cost.

If you don't want to rely on disincentives, however strong, you can prevent attacks entirely. Chronomantic Escape gives you one trip around the table—probably all you need—and you can use Chronosavant or Chronatog Totem to skip your next turn and extend the protection if you're at a smaller table. Magus of the Moat and Ensnaring Bridge restrict which creatures can attack you. If you're playing with older cards, there's the always-obnoxious Arboria. And for targeted burn spells and abilities, you can give yourself shroud, or something like it, with Ivory Mask, Imperial Mask, or True Believer.

The most promising cards are the ones that prevent all damage—Pariah, say (or Pariah's Shield), preferably on something resilient like Cho-Manno, Revolutionary or Stuffy Doll. Glacial Chasm is an oldie that you should be able to maintain long enough to turn on Luminarch Ascension. Battletide Alchemist makes a good lynchpin for a Cleric-based defense, along with Battlefield Medic, Master Apothecary, and Shieldmage Elder.

The gold star here goes to Solitary Confinement, which prevents all damage that would be dealt to you. The cost is skipping your draw step and discarding a card every upkeep—but with an active Luminarch Ascension, who needs cards?

Once you've gotten to the end of your quest, you'll want to stay there. You can protect Luminarch Ascension from targeted enchantment removal with Privileged Position, Sterling Grove, or Greater Auramancy, and from most mass and targeted removal with Indestructibility or That Which Was Taken. Special mention goes to Elspeth, Knight-Errant, who can gum up the ground early, then make your Angels and their source indestructible for good.

So you've achieved your goal and are poised to reap the rewards: an all-you-can-summon buffet of two-mana 4/4 Angels. That really is its own reward—when every

you can muster turns into a 4/4 flyer, your opponents are in serious trouble.

But if you want to build a deck to take advantage of it, that ready source of creatures can do some crazy things. Angelic Chorus will gain you a lot of life, no matter what subsequently happens to your Angels. Death Match, back in the white-black pair-up, could easily allow you to wipe the board, and Pandemonium could be even sicker (though also riskier). Aura Shards deals with pesky artifacts and enchantments. Juniper Order Ranger gets huge, while making your Angels 5/5s. In the Web of War is a weird way to make 6/4s with haste. And Kavu Lair is awesome, drawing you a card every time you make an Angel; the only danger is running out of cards! And there's always Wheel of Sun and Moon for that ....

Gauntlet of Power (set to white, of course) deserves a special mention too. It pumps your Angels up to 5/5 and doubles the number you can make (and that's just one Gauntlet of Power). You can also amp up the Angel production with Heartbeat of Spring or Mana Echoes, the latter of which could net you a lot of mana over time. And of course there's the venerable Intruder Alarm, which almost makes it hard not to think of instant-win combos with Luminarch Ascension. Two Noble Hierarch / Birds of Paradise / Utopia Tree? Infinite Angels. Three of those, or one Bloom Tender? Infinite mana and infinite Angels. Just don't be surprised if casting Intruder Alarm causes absolutely everyone to drop what they're doing and kill you (or even combo out on their own somehow).

Over on the darker side of things, an endless stream of creatures can mean an endless stream of sacrifices. Kill a lot of things with Attrition. Protect yourself with Circle of Despair or Martyr's Cause (which can also help you achieve your quest in the first place if you have some early creatures). Lead the charge with the thematically appropriate Fallen Angel, make a very resilient Ghost Council of Orzhova, or throw Angels at problem utility creatures with Fodder Cannon. With Ashnod's Altar, you can use your Angels to hold mana in escrow, as it were, building up for some big X spell like Martial Coup.

You also have a ready source of creatures that isn't itself a creature card, which makes me think of Polymorph. Perhaps your deck stocks a single copy of Progenitus ....

Of course, maybe I'm overthinking this. Maybe, just maybe, when you can make 4/4 flyers for two mana each, you don't actually need to go looking for a win condition. Maybe ... you kill them with Angels.

While Free-for-All, preferably with five players, is where Luminarch Ascension will shine, it does some interesting things in other formats. In Two-Headed Giant, for example, it triggers twice at the end of your opponents' turn, even though they took their turn at the same time. Even better, you've got a buddy to watch your back.

It's also interesting in Star, where you have two opponents—that's twice around the table—but each of them has to worry about another opponent who's your friend, at least in theory. Of course, your friends only win by killing their opponents before you kill yours, so in practice they might not be thrilled either. But what are they going to do about it? Yeah, that's what I thought.

The other format that jumps to mind is Planar Magic, a casual format that uses the new plane cards from Planechase. You can customize a minimum 10-card planar deck of your own from the 41 planes available. For a deck featuring Luminarch Ascension, I might bring a planar deck like this:

Eloren Wilds, Naya, and Krosa do some of the mana-ramping I talked about earlier, and Eloren Wilds' chaos ability doesn't bother you much. Skybreen, The Eon Fog, The Hippodrome, and Goldmeadow slow everyone down while you get your Angels on, and The Fourth Sphere doesn't hurt you nearly as much as everyone else. The Æther Flues does the Polymorph trick I mentioned earlier, and Krosa and Undercity Reaches make it even better to attack with all those flyers.

Speaking of Planar Magic, did you go to the Release Events this weekend? Have any awesome stories or cool photos? If so, be sure to post them in this thread. Good times!

That's it for this week's preview, folks. You can mark "A card that allows you to pay eight mana for four 4/4 fliers" off of your Mark Rosewater Zendikar hint bingo sheet. Next week ... well ... I've got two words for you: Legendary. Octopus.