elcome to Landfall Week! It's been a week since we first made landfall on Zendikar at the Prerelease (see what I did there?), and that means I've had time to look over the Visual Spoiler and comb through the set in Gatherer finding cards I've just got to play with and decks I can't help but build. Then it's off to paw through my physical cards from Prereleases and Launch Parties to see what I can throw together.

Some Zendikar cards demanded a place in my existing decks. Others led me to entirely new deck ideas, some of which I've built and some I'm still pulling together. And there are still more that I haven't found a spot for yet, but that I have a feeling I'll be slinging sometime soon. 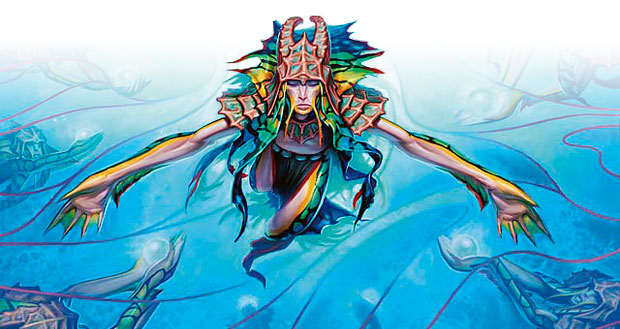 As it happened, I was on my way to a gathering just a few days after the Prerelease where I knew there'd be some Magic, specifically Elder Dragon Highlander. I've assembled a small stable of EDH decks now, and before I headed over, I spent a few frantic minutes updating them with thematically appropriate Zendikar cards. Full updates will come later—this was just a quick pass to fit in the cards from my Sealed Decks that cried out to come along.

I'm working on an EDH Goblin deck, inspired in part by acquiring both Warren Instigator from Zendikar and Goblin Lackey from From the Vault: Exiled. Looking at those two made me realize that there are a huge number of fun Goblin tribal effects across Magic's history—enough that I could probably build an EDH deck using just about nothing but. And that's hundred-card Singleton, remember. That deck wasn't ready in time, though, so it'll have to wait.

My Nicol Bolas deck, which is themed around copying, stealing, or redirecting my opponents best creatures and spells, picked up Roil Elemental. In this deck, it will often be stealing two creatures on each of my turns. Bolas also picked up a new and occasionally grandiose way of copying things: Rite of Replication.

Rite of Replication is possibly my favorite Zendikar card so far. Unkicked, it's "just" a Clone, with a couple of weird differences like interacting with Doubling Season. Clone's a fine card, and I happily play it in several decks. Kicked, though ... kicked, Rite of Replication is bonkers. I've heard of it doing so many dumb things even just in Zendikar Limited games over the last week.

I myself have cast Rite of Replication unkicked to copy a Rampaging Baloths right before playing Scalding Tarn, cracking it to go get a land, and casting Harrow, for a total of eight 4/4s. A friend of mine thought she was in pretty good shape after casting a hasty Hellkite Charger and attacking for 5, threatening 10 the next turn. Her opponent decided to do one better—or five better, really—and kicked a Rite of Replication targeting the Charger, for 25 hasty flying damage. And LMTRK, in the forums of last week's article, shared this awesome Rite: 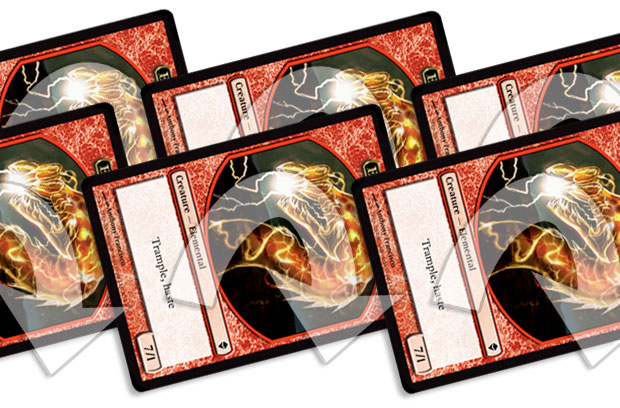 My best pre-release story from Zendikar:

8 Lands in play, Zektar Shrine Expedition with 2 counters on it.

Play my 9th land, Landfall triggers giving me the 3rd counter, I sac the Expedition to get the 7/1 Hasty Trample token... then cast Rite of Replication with the Kicker paid, and swing for 42 damage!

I did this in a casual game first, and then pulled it off in a real game too, both on the same day! :D

In Sealed Deck, swinging for 42 is generally going to be Game Over. If you ever pull this off in multiplayer, though, or get fogged or something, take note: Although the original token from the Zektar Shrine Expedition will be exiled at the end of turn, the copies created by Rite of Replication are yours to keep! 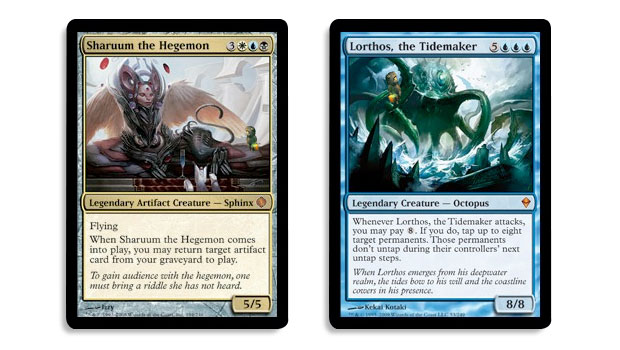 The EDH game was an epic affair. I had Sharuum. Laura's Mayael the Anima deck got off to its customary slow start, then started filling the board with Grade A beef. I was happy to see that Mike had built a Lorthos, the Tidemaker deck, complete with nautically appropriate choices like the surprisingly sturdy Spiny Starfish as well as more traditional multiplayer tools like Vedalken Shackles and Treachery. And Anne, whose deck was piloted by at least three people over the course of the game, brought Experiment Kraj to the table, backed up by graft creatures like Cytoplast Manipulator as well as creatures with fun-to-copy activated abilities, like Thornling. 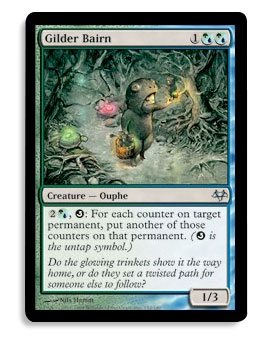 The unquestioned star of Anne's deck was the rather unlikely Gilder Bairn. It doubled counters all over the place, keeping Anne's whole army well stocked. More importantly, it granted its

ability—or, say, Godsire's—and you get a terrifying lesson in powers of 2.

Laura had thrown down Vigor and covered her team in +1/+1 counters, then Mike had stolen Vigor with Treachery and done the same, with Lorthos hitting 18/18. And me? I had Darksteel Forge, so my team of artifact creatures wasn't going anywhere, but with Vigor spreading the love, I started to feel a little outclassed.

So I tapped Tolarian Academy for ten blue mana (like you do) and cast a kicked Rite of Replication. But what to copy? Godsire seemed pretty darn good (and no, as I always have to remind myself, it's not legendary!). Mycoid Shepherd tempted me, given that I was at "just" 36 life at a table filled with enormous beasties. In the end, though, it had to be Vigor.

Now, five Vigors doesn't mean five times as many counters. It does mean, however, that they all protect each other as well as the rest of my team, so I had redundant Vigor back-ups. Seems very Esper somehow. 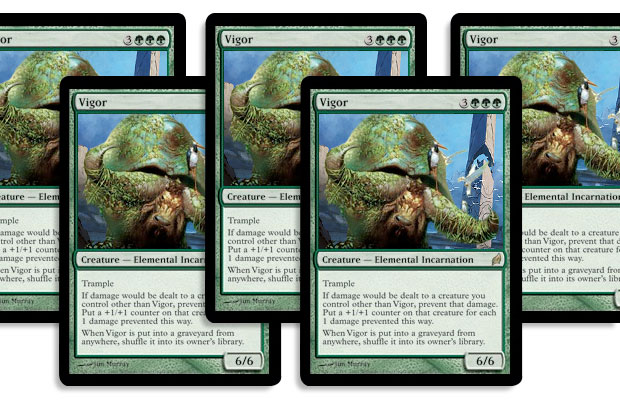 After that, things started looking up for me. My creatures were extremely hard to kill, and they kept getting bigger. Anne's deck, now piloted by Duane, had a really good go at killing me when Experiment Kraj doubled Gilder Bairn's +1/+1 counters up to 110 or so and Cytoplast Shambler gave it trample to get past the 24/24 Vigor I'd put in front of it. But when all the doubling had ceased, I revealed, almost apologetically, the Path to Exile I'd drawn the previous turn.

Things got more ridiculous from there. The board was mass chaos, so absurdly complicated that at one point I was prepared to just walk away and call everybody a winner. It wasn't a big table and almost nothing was actually dying, and on top of that we were using probably all of the dice in the entire house to mark +1/+1 counters. (Pro tip: For ridiculously large creatures, it helps to use coins at face value.)

I ended up taking Mike out with flyers after knocking him to 10 with Magister Sphinx, then killing Laura and Anne/Duane/whoever in one turn—even though Laura was at 101 life! My creatures were ... kind of big. And indestructible. And mostly flyers. It was dumb! And I had Rite of Replication, at least partially, to thank.

Some time ago, after Conflux came out, I made a deck featuring Coiling Oracle, Skyward Eye Prophets, and lots of Ravnica bounce lands like Simic Growth Chamber and Azorius Chancery. I called the deck "Phase 3: Prophet," and that's terrible.

Back then, I explored the

angle, including other cards like Giltspire Avenger and Knight of the Reliquary and the

ability helper Thousand-Year Elixir. Now, I took the deck back out and revamped it, abandoning that angle (for now) and instead trying to take advantage of some Zendikar hotness, specifically landfall.

2 Shield of the Oversoul 2 Steel of the Godhead

3 Magus of the Future

4 Grazing Gladehart 1 Jenara, Asura of War 2 Shield of the Oversoul 2 Steel of the Godhead 2 Wargate

3 Magus of the Future 1 Ant Queen

Explorer's Scope does a pretty good impression of Skyward Eye Prophets' ability (and Coiling Oracle's). It's equally exciting with the bounce lands, and it gives my Coiling Oracles something to do after they hit the battlefield. Also on my list was the Scope's frequent partner in crime from my Sealed Deck at the Prerelease, Grazing Gladehart. Together, they form the formidable Scopealope. (Go on, say it. "Scopealope." You'll feel better.) 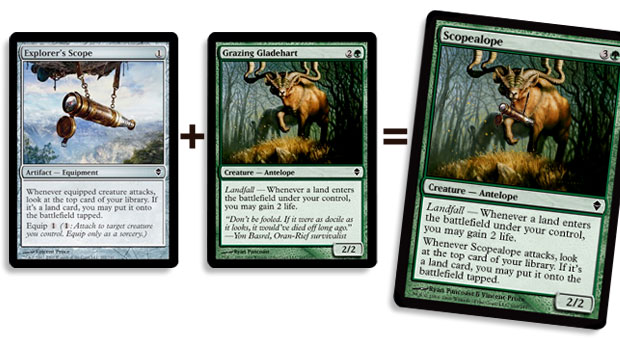 Since this deck is great at ramping mana but sometimes lacks in the "bringing things home" department, I rounded things out with landfall slugger (and Prerelease promo card) Rampaging Baloths. Eternity Vessel is also splashy fun—Gladeharts and Steel of the Godhead get my life total high, and Eternity Vessel keeps it there. I saw that card in action at the Wizards internal Prerelease, and it is a tough thing to battle past!

Nor is Zendikar the only boost this deck's gotten. Since I built it, Alara Reborn was released, and with it many golden goodies. Wargate is the world's weirdest Rampant Growth in disguise, and there are worse ways to spend turn three than grabbing an Azorius Chancery. But once I'm up to speed, it can grab one of my Auras, Rampaging Baloths, Garruk, or whatever else I want. And as far as searching up the Auras goes, Sovereigns of Lost Alara is another really cool Alara Reborn addition, setting up Skyward Eye Prophets with all the tools they need to keep swinging, pad my life, survive removal, and hit hard. 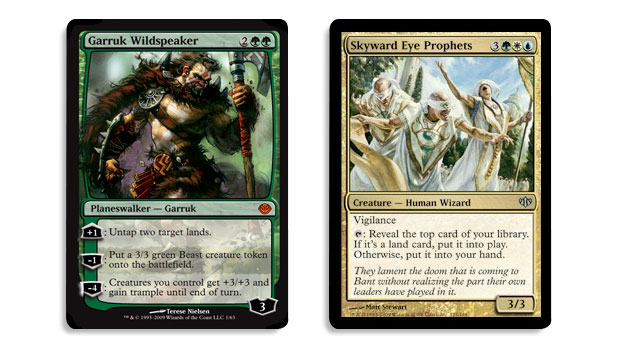 The other thing I'd noticed with this deck was a paucity of things to do with all the mana I inevitably built up, especially once I added Garruk Wildspeaker (who can often untap two bounce lands to give me a four-mana boost!). Wargate is one way to spend a lot of mana, but only once, and I added Protean Hydra for the same reason. I also threw in several ways to sink as much mana as I have: Ant Queen, Seedcradle Witch, and Jenara, Asura of War. Seedcradle Witch can even untap Skyward Eye Prophets, which is pretty cute.

Oracle of Mul Daya, the green Future Sight, does everything this deck could want. I still get to look at the top of my library, and I still get to play it sometimes. And playing extra lands is extra awesome with the bounce lands, often actually generating mana.

I haven't built a more dedicated landfall deck yet, but it's easy to see what one might look like. Steppe Lynx and Plated Geopede in particular are tiny creatures who can attack for tons in combination with Harrow, Khalni Heart Expedition, Terramorphic Expanse, or, again, Oracle of Mul Daya. Actually, Oracle of Mul Daya is one of those cards, like Rites of Flourishing, that I should probably own sixteen or twenty of. I will pretty much always want to put it in my green decks. 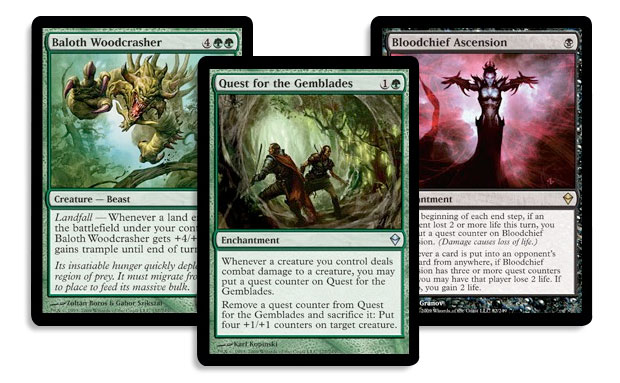 There are a lot of cards that I just don't happen to have pulled that I'll be on the lookout for over the coming weeks. Baloth Woodcrasher isn't even a rare, but somehow I only have one of them. Quest for the Gemblades is also an uncommon, and I don't have any of those at all. And Bloodchief Ascension looks absolutely stone-cold bonkers in multiplayer.

So what about you? Any cards or deck ideas catch your fancy over the last week? Is there anything you've already built, or can't wait to put together? I'd love to see it!