Leading a Horse to Water

e are going to try something a little unorthodox. We are going to play "Guess the Card." I know you are saying that this has been done before, but my version is going to be much more difficult. We are going to have several questions before any of the card is revealed. I know there are several people who aren't interested in fun and just want to see the card. I'd encourage you not be put the cart before the horse and join the rest of us. However, if you insist, feel free to scroll to the end of the article and click the link down there.

For the rest of us, let's get started!

Clue #2. Don't rush down and click the last link in the article. That isn't the card. And by the way, there is a clue in the opening paragraph.

Clue #3. Check out this partial image of the card. 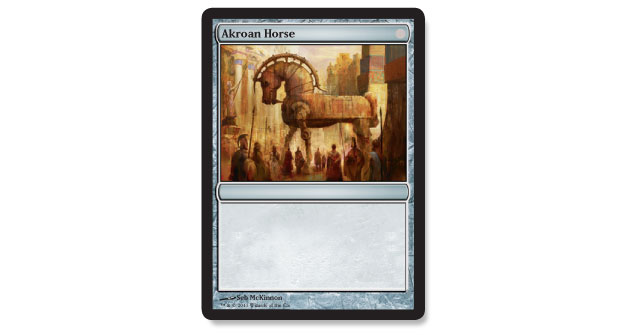 If you haven't figured out the card yet, then you don't know the Trojan Horse tale. The question at this point is how Wizards is going to portray the story on a card. Based on just the art and the frame, we know this is an artifact. If it is an artifact, it is probably the horse and not the soldiers inside. 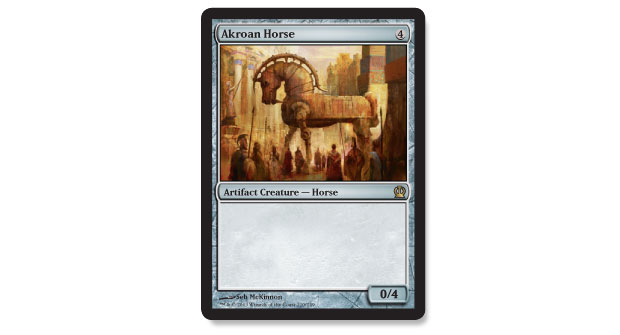 So far, so good! We have a few more clues revealed. We know it is an 0/4 creature for four mana. The last 0/4 artifact creature that cost four mana was Crenellated Wall. I think we can be pretty sure that Akroan Horse will do more than give a creature +0/+4 until the end of the turn. 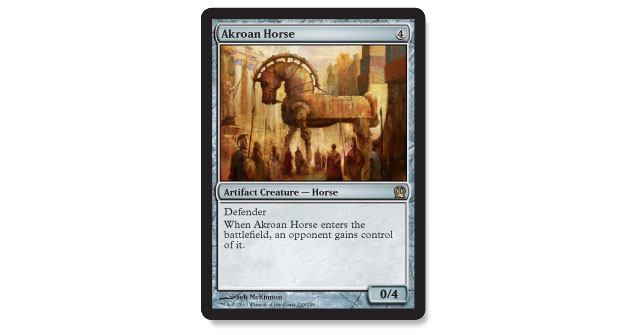 So, right now, I'd rather have the Crenellated Wall. I don't think any of us are willing to pay four mana to give our opponent a 0/4 creature with defender. There are times when you really want your opponent to have a creature but those are very limited situations. There are many cards that can make a token creature without costing you an entire card (Phelddagrif is my personal favorite).

Sleeper Agent and Gilded Drake are two cards from the past that you would cast, only to give them away to an opponent. As someone who has lost Wurmcoil Engines and other game-changing creatures to Gilded Drake, Akroan Horse is in very good company. I'm not expecting anything as crazy good as Gilded Drake (that thing can be just crazy busted), but it is promising!

Given the Trojan Horse tale, you know this has to backfire on your opponent. The horse was full of Greeks. Surely we get something good right? 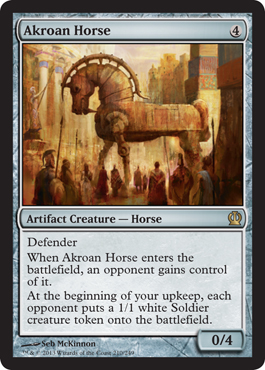 Now that is a flavorful card! This does exactly what you would expect Akroan Horse to do. It makes so much sense on every level. The art on the card fits perfectly. This is the image I would expect to see in my elementary school book on Greek mythology. It returns me to my childhood and the joy of reading about the fantastic gods and stories set in that time.

The idea that it is a 0/4 Artifact Horse with defender is just perfect. It was constructed to look like a large horse, and is useless for attacking, so the flavor continues to pour into the card. The idea of everyone else getting 1/1 Soldiers every round just adds to the image of the soldiers pouring out from inside the statue. The Vorthos in everyone can rejoice!

The card is pretty straightforward, but it does have a few twists. You pay the mana to put it onto the battlefield, then your opponent gains control of it. If you have multiple opponents, you pick the opponent. On that player's upkeep, all of his or her opponents (including you) get a 1/1 white Soldier creature token. On that player's next upkeep, all of you get another 1/1 token. The Horse opens up and everyone else gets a gift. 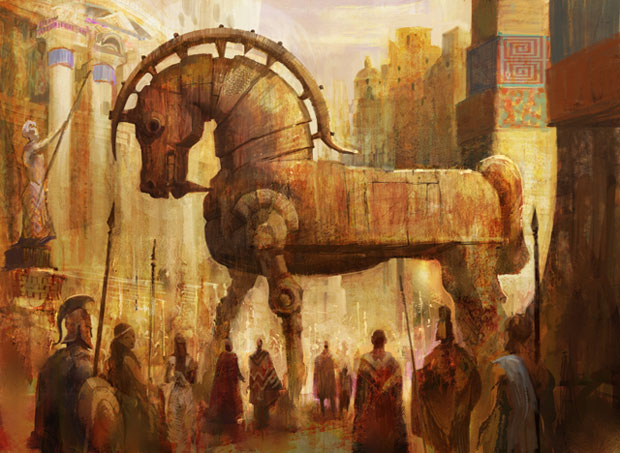 Don't Look a Gift Horse in the Mouth

In spite of this gift from Wizards, we are going to take a closer look and see just how good this gift really is. This is a card that plays differently in one-on-one games versus multiplayer battles. In duels, you give your only opponent a solid defender and, in return, you get a free creature every turn. In multiplayer, you give one person a solid defender and everyone else gets a 1/1 creature every round. The benefit in one-vs.-one play is clear. If you are running a deck with small creatures, that is looking to overwhelm an opponent, this card works. Akroan Horse won't die to a 2/2 or even a 3/3 creature, and it can't kill any of the 1/1 creatures it creates! Added to the other creatures you've made, you will quickly overwhelm your opponent. 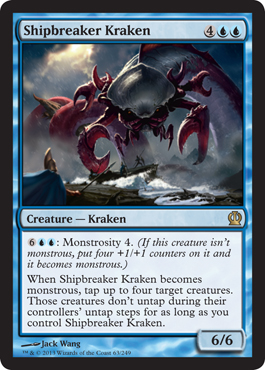 Does giving it to one of your less-threatening opponents make sense? You still get your 1/1 and your primary threat doesn't get a blocker he or she will use to chump block something big as soon as possible. In this scenario, it still doesn't make a lot of sense. You are giving your biggest threat the same thing you are getting. You need a way to maximize your benefit while limiting the biggest threat's.

Anax and Cymede is one option. When everyone is getting a similar benefit, make yours better. Captain of the Watch; Collective Blessing; and Sorin, Lord of Innistrad are three other cards that pump your small Soldiers. Between Soldier tokens and your horde of other creatures, pumping them up and giving all of them trample, flying, double strike, or banding is great fun. I love me some Akroma's Memorial in these kinds of decks.

Massacre Wurm is another option. You'll want to hold off for a while in hopes of seeing your opponents amass several Soldiers each before casting it, but he can certainly make things fun. Akroan Horse fits nicely into the deck.

Another favorite option would be Elesh Norn. Your soldiers become 3/3 powerhouses while everyone else's Soldiers simply die. Even the Akroan Horse you gave is reduced to a 0/2. Add in some Soul Wardens, Soul's Attendants, and/or Suture Priests to taste and your games will get ugly fast. Admittedly, you would need to leave the controller of Akroan Horse as the last remaining opponent while you killed everyone else and reaped the benefits of the Horse, but it is certainly another option.

Zedruu is another option. Akroan Horse seems like a perfect fit for the deck but I'm really not sure. I haven't built the deck or played against a true Zedruu deck in some time. Chime in on the forums and make your suggestions.

For something a little more off the beaten path, how about a card that is a little more old school: Mana Echoes. With all those Soldiers entering the battlefield at the same time, Mana Echoes can offer quite a bit of mana at one time. If you are running a Soldier-themed deck it shouldn't be too difficult to have a couple of Soldiers already on the battlefield. In a four-player game, three Soldier tokens enter the battlefield at the same time. With two other Soldiers under your control already, you would get three mana for each of the tokens from Akroan Horse. These numbers would only increase on future turns and only increase in larger games. With cards like Aurelia's Fury, Comet Storm, and Fault Line, there are plenty of instant-speed mana dumps that can bring a game to a quick end.

From the Horse's Mouth

I figured I would add in the brand-new Elspeth. I know at six mana she may be a little slow, but the prospect of adding three Soldiers at once means even more mana that can be used on your main phase. With Mana Echoes, Elspeth's first ability gives you creatures and adds mana to your mana pool!

Akroan Horse offers all sorts of interactions, appealing to the Vorthos and Johnny in all of us! Now if you'll excuse me, I'm going to have some fun with everyone who raced to see the Akroan Horse!

Thanks for sticking with me all the way to the end. I'm sure you've figured out the card by now. Enjoy Akroan Horse!

Surprise! Much like the Trojans, you accepted my gift to your bosom, only to discover that it wasn't what you thought it was. I'd like to encourage you to enjoy the fun and flavor of Theros and read through the article. I promise you that the link to Akroan Horse, the preview card in this article, is there and won't be too difficult to find.

Or perhaps it is just another Trojan Horse...