Welcome to my Prerelease! In addition to being a casual player who plays weekly games around the kitchen table, I am also a tournament organizer (TO). My group of regular players is a little different, in that they are all younger players who play every week at the local community library. Some of you are thinking that your stores have a lot of younger players, but this is a little different.

The average age of the players at my Prerelease was 12.8 years. The youngest player was nine, while the oldest was seventeen. Like I said, my group is a little different. 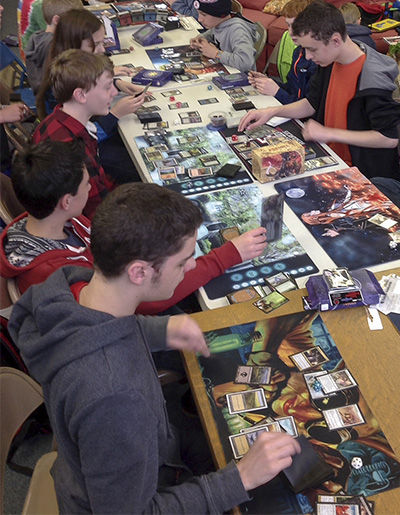 This Prerelease went off without a hitch. I'm always a little pressed for time, since the library opens at 10:00 and closes at 3:00. Fitting in forty minutes to build decks, four fifty-minute rounds, and a thirty-minute lunch break isn't always easy. The players have been very good about helping out. The library opens at 10:00, so while I open up the Prerelease packs and collect fees, the players and Griffin1 set up the tables and chairs. The players also do the tear-down at the end of the tournament. The last match finished at 2:55 and everything was packed up and cleaned up by 3:02. The kids and the library staff are all great about getting involved.

Once the packs were passed out and players started building their decks, I had a chance to catch my breath. White and black were the two favorite colors, with only a single player choosing either red or blue. I spent most of the build time putting everyone into the system and getting pairings ready for the first round. We had a couple of late arrivals, but everything worked out. When time was called for deck building and pairings were announced for the first round, only one young player, Tyler, was not quite finished, and he was the player who received the bye in the first round! Excellent luck! 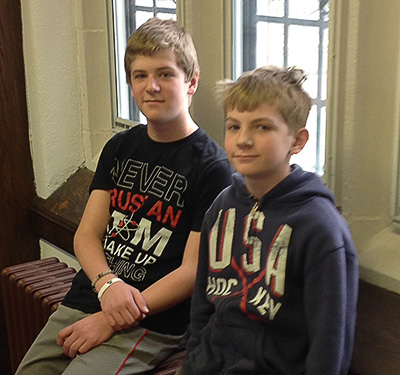 This was Tyler's (age ten) first Prerelease, but his brother Andy (age thirteen) has been in several tournaments. Andy was good about helping his brother along, all while working his way to a 3–1 tournament himself. I didn't get to spend time checking out Tyler's games, but he seemed upbeat throughout the Prerelease, so I hope he had a good time. I look forward to seeing Tyler at future Prereleases. 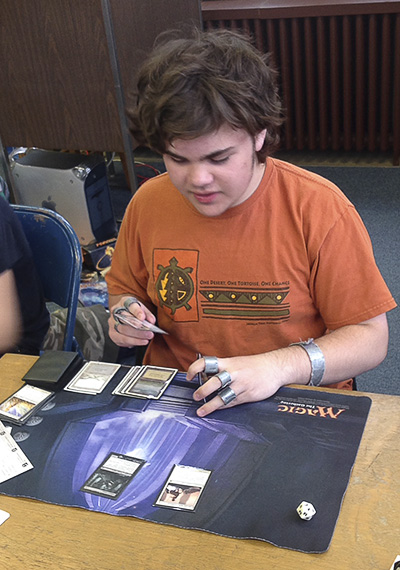 Solomon (age fifteen) is one of the longest-tenured players at the library. With his ever-present duct tape rings, Soly builds his decks to produce games he finds interesting. When you walk past a game with Soly involved, you know you are getting a bizarre board state with cards used in a way that you might not have considered.

His unique style doesn't always translate into wins, but it always makes for an interesting game. Soly and his younger brother, Theo, have attended more Prereleases than anyone else at the library. His battle here with Nate didn't go his way, but he pulled out a couple of tough matches to go 2–2. Soly's presence is part of what makes the Prereleases at the library fun and interesting for me to watch. 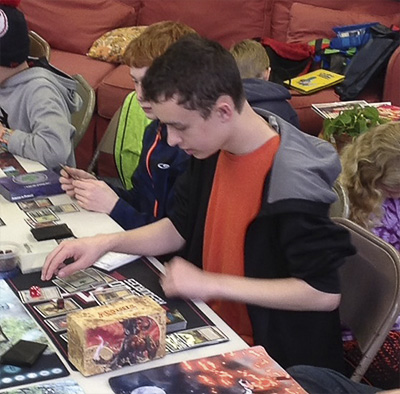 I mentioned Ryan (age seventeen) earlier; he was the shark in the room. Ryan used to play at the library all the time a few years ago, but moved on. He was looking for more competition, wanting to get better, and the environment at the library had brought him as far as he was going to go. He started to attend FNM and soon after was getting to any PTQ within an hour's drive. Ryan is a young, talented player with drive, who regularly does well at any tournament he plays in.

Ryan's return to the library scene for our Prerelease showed that he has added sportsmanship to his resume of skills. Win or lose, he had a smile on his face. He shared his knowledge with his younger opponents, recommending better plays. He went through decks with players, suggesting changes to improve their list. He was helpful to me throughout the tournament, pointing out in-game issues at other tables and keeping things moving. Ryan finished 3–1 but, more importantly, was a role model to the other players. 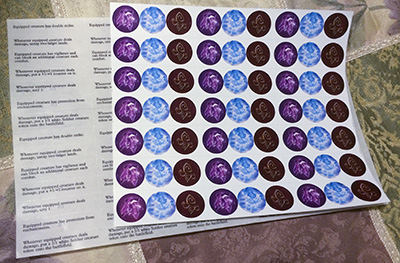 If you attended a Prerelease, you know that each match was provided a set of three colored stickers. Players were encouraged to aim toward a particular ability by getting the correct set of colored stickers.

The players loved it.

The idea of "creating their own Magic card" was fun. Every one of them struggled to get the ability they wanted and were excited when they could turn over their card to get the sticker to make their awesome Equipment.

I do wish I had cut up the sheets earlier; I felt like I spent too much time cutting out the correct ability off a sheet of stickers, and not enough time circulating and watching the games. 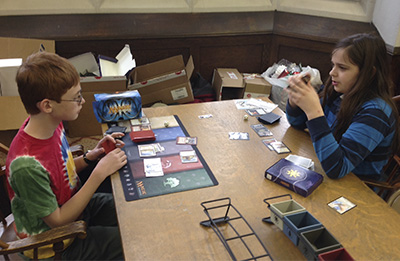 Asa (on the right, age fourteen) and Jacob (age thirteen) are two of my regulars who have grown up with these Prereleases. Both kids started off understanding how the game was played, but their decks weren't always the most optimal builds. They always seemed to have a great time, but the results weren't always there.

Now, the boys are comfortable in the Prerelease experience. Jacob helps to guide his younger brother and helps all the younger players. His 3–1 record is a pretty typical result. Asa has turned the corner, finishing 4–0 at the last Prerelease, and 3–1 in this one, losing only to the overall winner. One of the joys of running the tournaments for this long is getting to see the players progress through the stages of Magic learning and developing into players who give back. 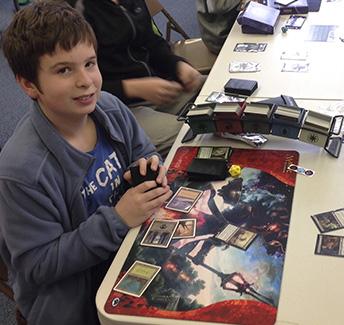 Tom (age eleven) was a new player at our Prerelease. He came with a few friends, and they seemed to have a good time. They enjoyed their experience and hopefully we'll see him and his friends for the weekly casual get-togethers and future Prereleases.

Every round, I give away door prizes. With young players, I want everyone to win something, so I have boosters for winning matches, and Consolation boosters for when they don't. Everyone got a set of sleeves at the start of the tournament. Everyone received a Journey into Nyx booster pack during the second round, just because everyone should have a good time, and if I can have an Oprah moment every tournament ("You get a pack! And you get a pack!"), then I go for it.

I also do door prizes. The door prizes for this tournament consisted of some deck boxes, some boosters from older sets, a Journey into Nyx poster, a leftover Gatecrash Intro Pack, and two playmats. 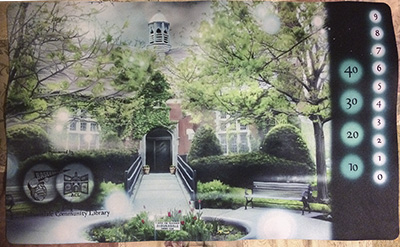 I had the playmats made around September last year. The image is the front of the library where we play. The players love the playmats and love the chance to win one. Every Prerelease, I give away two of them as door prizes. The first one had already gone to Evan, and the next one was the last door prize in the final round. After rolling the dice, Tom was the winner!

I made a big show of congratulating him for winning the playmat, explaining that they were rare and couldn't be bought anywhere. His opponent, Bennett, is a long-time player at the library and excitedly pointed out the ghosts and treefolk that were Photoshopped into the art. He pointed out the numbers on the side, explaining that you wouldn't need dice to keep track of life totals, with a counter right on the mat. Bennett knew that not many of the players had a playmat yet, and he told Tom what a lucky guy he was for winning one right at the end of the tournament.

Tom checked out the playmat, and seemed to think it was pretty cool, especially when Bennett showed him some of the things that aren't readily apparent when you look at it. Without batting an eye, he looked at Bennett and asked, "Do you want it?"

He went on, "I already have a playmat, so if you'd like it, you can have it." Tom had met Bennett at the start of that game. They had known each other for perhaps five or ten minutes, yet Tom was willing to give up his prize to Bennett, just because he knew Bennett wanted it. There was no thought to trade with Bennett for it. No taunting anyone because he had something they might want. Without a drop of guile, he offered the mat to Bennett, with no strings attached. Bennett confirmed that Tom was willing to do it, then happily took the mat, using it for the rest of the game.

I want to think that if I was in that position, I would do the same thing, but I know I would not. I would have kept the mat, or perhaps traded it away, but the thought of giving it to someone who would obviously appreciate it, for nothing, wouldn't have crossed my mind.

And I thought I was the one who was supposed to teach eleven-year-olds about sharing.


1: One of the players who started the group, Griffin now helps me run the tournaments. An extra pair of hands really keeps things moving along!