y friend Jesse has been running a fun deck since Zendikar that I have wanted to share for a while. Jesse started with our group and found the decks he was used to playing weren't going to work. Jesse and his group of friends played a more cutthroat casual game with combos going off quickly, and the power level in most decks was pretty high. In our group, Jesse found a slower-paced game with the power level much lower than what he was used to. If he stayed with his usual decks, we would have been blown out regularly. Rather than try to drag us up to what his group was doing, Jesse embraced the different attitude and took advantage of it. He built the decks that were crazy theme decks or had off-the-wall ideas. The kind of decks that would get blown out in his old group, but got great laughs in our group.

With Jesse, you are never sure what you're going to get. In one game he'll play an all-common burn deck. In the next, it'll be Thallids. Homarids is another favorite. Jaya Ballard has been his favorite commander for a while. Jesse will play a Duel Deck right out of the box. He appreciates a crazy combo and chaotic board states are what he loves. Jesse owns a copy of every Planechase card ever made and we try to take advantage of that regularly.

The deck I wanted to look at today really shows off Jesse's style. The deck embraces our slower-paced games, offering big in-game swings, and is exactly the crazy fun that casual Magic can be. The list below isn't his exact list. He changes it from time to time, but the core of the deck, Quest for Ula's Temple, doesn't change.

Give Me That Fish!

The goal of the deck is to get a Quest for Ula's Temple into play, with three counters on it as fast as possible. Clockspinning is there to add counters to the Quest. Anyone who has played with the Quest knows that it is often destroyed right before you get a chance to use it. Clockspinning can surprise a lot of opponents and bring things online just a little faster. Clockspinning also makes a great combat trick. So many permanents have counters on them that being able to add or remove one at instant speed makes things interesting. Mucking about when one opponent attacks another opponent is always fun.

Mystic Speculation, Crystal Ball, and Augury Owl are the Scry team. Initially, they search for the Quest, although if you don't have it in your opening hand, you should probably consider mulliganing the hand. Our group offers one free mulligan, then for every mulligan after that, you reduce your starting hand size by one. Considering the time it takes to get the Quest online, you really want it to be your first-turn play.

With the Quest for Ula's Temple on the battlefield, the Scry team does its best to have creatures sitting on top of your library on your draw step, so you are adding a counter to the Quest every turn. The Crystal Ball is a little slow in this respect, since it costs three to cast and one to use, but it is an all-star later on.

With the Quest loaded with three counters, the Scry team has only half finished its work. If you are putting massive creatures into play on each end step, you are going to want as many creatures as quickly as possible. The Scry team continues to load Krakens, Leviathans, Octopuses, and Serpents to the top of the library.

Other candidates were considered. I looked at other versions of the deck and found people using Sensei's Divining Top and Cryptic Annelid in their versions. I don't know why Jesse wasn't using those, but I assume the Top wasn't used since it simply reorganizes the top three cards without really looking deeper into the deck for the cards you want. Also, it can be a difficult card to find and I think Jesse's copies are in other decks. The Annelid can add a counter to the Quest, being a creature, but the ability to use Mystic Speculation and Crystal Ball repeatedly are probably more important. Besides, the Annelid doesn't play well with Whelming Wave.

Brainstorm allows you to dig a little deeper and can return the creature that got you a counter on the Quest on your last draw back to the top of your library to get you another counter.

The big-creature package could probably be altered, but this seems like the way to go. Stormtide Leviathan can lock down the board, shutting down most attacks. The rest of the big creatures from the Deep are somewhat interchangeable, each offering a big body and some kind of bonus that you can choose, depending on what you are looking for with the deck. I believe Jesse made his choices based on keeping variety and what he had available.

The real problem lies with flying creatures and multiple opponents. When you have one or two creatures from the depths of the ocean on your side, it can take several turns to kill multiple opponents, even with Stormtide Leviathan limiting the attack options. Those multiple turns can leave you vulnerable to attacks. It would be a shame to get this far and lose to a puny 2/2 simply because you needed another turn or two with your Kraken.

The other weakness of the deck is that it does little to nothing until the Quest for Ula's Temple comes online. Sitting without any creatures for what can be five turns, especially with multiple opponents, can just mean that you are dead before you even get started. Clockspinning helps limit this by speeding things along, but unless you want to load your deck with puny creatures that you can cast early (and really, this defeats the whole point of the deck!), you are stuck.

The best way to limit those early losses, and prevent your opponents from doing those final points of damage before you can crush them, is with a card I added to Jesse's deck: Whelming Wave. 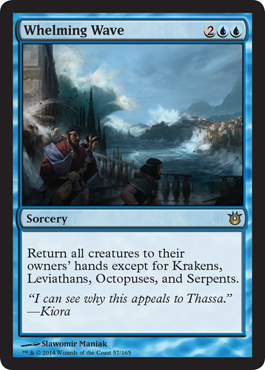 Okay, so back to the deck. Whelming Wave isn't going to do much for those first three turns. You are still open. You hopefully have two counters on your Quest and are ready to make things ugly for your opponents. If your life total has already started to drift low, you might want to use it now. If not, then just hold it and wait. Unlike other spells that bounce everything to their owners' hands, with this deck, your big creatures will get a path opened up to attack anyone. Any two of your creatures will likely be able to hit for 10 damage and they don't need to be unblockable or have trample to do it. Whelming Wave offers flexibility. You don't have to use it, then drop creatures. You can drop creatures and continue to hold it until you feel a real threat

For any deck that likes big swings, big creatures, and hitting for huge damage, Whelming Wave will be a welcome addition.

However, don't stop there. While my first instinct (and likely the first instinct of anyone who has seen Quest for Ula's Temple) is to use Whelming Wave with Quest (and why wouldn't you? Point me to another card that lists Krakens, Leviathans, Octopuses, and Serpents.), stop and read the card again. At the time of writing, I have not seen any other cards in Born of the Gods. Right now, there are only three cards in Standard that will not get bounced by this card. If I were to guess, I'd say there will be more Krakens, Leviathans, Octopuses, and Serpents printed in Born of the Gods and Journey into Nyx. If that is the case, then you are going to be careful running this in just any blue deck as a way to bounce everything. I suspect, even with more creatures printed, in most games, Whelming Wave is going to read, "Return all creatures to their owners' hands." In casual games, where the card pool includes everything, the likelihood of any creatures escaping this bounce is very low. This card is going to read, "Everyone else cries while you win the game."

The common alternatives for Whelming Wave are Evacuation and Inundate. Evacuation offers the benefit of instant speed but costs five mana. Inundate is sorcery speed, costs six mana, and removes all nonblue creatures. Each of these offer different benefits and will work with different decks, but four mana to bounce everything except your most powerful creatures sounds like a great option to me. I'm confident Whelming Wave will wind its way into your decks in the weeks and months to come.