Lessons from the Planeswalkers

multiplayer, the planeswalkers are like having an additional buddy who's working only for you. Oh, sure, you have to pay mana to get your friend out beside you... But when you slide them onto the table, there's that delightful feel of a card having your back.

"Hey, Ajani, mind casting a spell for me?"

"Liliana, could you absorb some damage that would otherwise go to my face?"

"Thanks, kid. I'll avenge you. Or just play another copy of you."

In fact, planeswalkers are such a help that I wondered how autonomous they could get. Say, planeswalkers—I know you can cast spells and take away damage... But can you write Magic columns, too? About, maybe, multiplayer?

How many loyalty counters will it cost me?

Aw, heck, you guys are worth it. 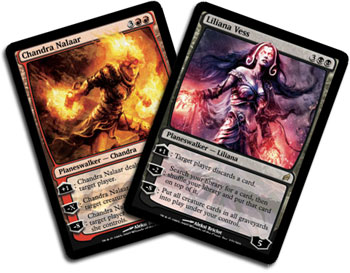 "And the first and best strategy for multiplayer is to have a lot of superfluous A's in your name."

"So it's true that the extra 'A' in Nalaar scores you more wins?"

"Very funny. You also distract your opponents 'cause you're a hot chick."

"Enough with the puns. Seriously, folks, the lesson we're here to teach you—and this is a lesson I learned from Jaya Ballard her bad self—is to kick 'em when they're down."

"Totally. Look at us! We're designed to take advantage of a topdeck war—we can't win if the game state is in flux! If our ally-player is vulnerable at all, someone's going to kick us in the face just so we don't go off. And you can't play us in the early game, since people will panic and kill us. Of course, I'm black-aligned, so I like to hang around the cemetery. What about you?"

"I just die. But like a phoenix, I am reborn from the ashes."

"Whoo, the creative team is working overtime for you, girl."

"I had a brief affair with Doug Beyer. But anyway, the lesson is that we're designed to take advantage of a stable board—or better yet, as the first play after a board-clearing spell, when everyone's still in topdeck mode. Either they find an answer to us in three turns or they die."

"Which is a valuable thing about multiplayer. We're designed to go into decks that exhaust people's resources so they don't have much to work with. I'm a strong finisher in a black deck, not only because my major ability serves as a gigantic finishing blow, but because I can tutor up any card needed. Basically, my text might as well read, 'Win any topdeck war.'"

"I have to admit it: I'm not quite as good as Liliana. But I am still great in a red deck that relies on global destruction to destroy all the creatures that everyone casts—once everyone's burned up all of their spells trying to get past the Molten Disasters and Pyroclasms and Booms, I mop up with spot removal and a gigantic Flame Wave."

"Chaos multiplayer—and, to a larger extent, all of Magic itself—is a resource war. If you can destroy enough cards while conserving your own, you're likely to win. And that's just what we do."

Like all lions, I love equipment and dead, fresh deer. But you know what I also love?

Aw, I know, it's right on my card. I can't really hide it. But big, tough, fierce players aren't supposed to like life gain! Oh, it's been getting some increased respect in the tournament field lately, but there's still a stigma; you're not supposed to play with cards that just get you life.

Let me tell ya, friends: Life gain is one of the most broken mechanics in chaos multiplayer.

Thing is, there are so many people out there baying for your blood that it's hard to have room to maneuver. Any weakness can kill you, if people feel obliged to take advantage of it—if there's a hole in your defense that lets 2 damage through, five players can work together to cut your life total in half between your last upkeep and this next one.

How do you fight that? Life gain. Grr! Buying 20 extra life gives you power—you can send your troops out to fight other players, knowing that it'll hurt them more than it'll hurt you! It takes more to kill you! Grr!

'Course, you don't want to play a card that does nothing but gain life (unless it's as unfathomably potent as Congregate, a card that I've seen snag as much as a hundred life at a shot! Grr!). You want friends with benefits, as they say; things like Lightning Helix and Loxodon Warhammer.

Viewed as a planeswalker, I'm not necessarily the most powerful—and that's a good thing! Essentially, I'm a walking Fountain of Youth times two. But unlike Liliana and Chandra, I won't strike fear into the heart of your multiplayer table—I'll just keep quietly gaining you life and growing in power, occasionally pumping your armies... and if the board is clear, I can provide one heck of a finisher (although my Avatar token not flying or trampling is a weakness I'm working on!).

Hi, I'm Garruk Wildspeaker, and the key to me is learning the value and timing of acceleration. Yes, even in multiplayer, coming out faster than your opponents is an awesome trait—dare I say "wild"?—even though you need to have a solid finisher. Luckily enough, I'm that, too.

But the thing is, my first ability—the one I love to do so much I adore you more when I'm done—can provide some truly broken turns. Ever heard of Gaea's Cradle? Yeah, go look that up. Or even, you know, Tolarian Academy. Of course, I can be equally nice with the Ravnica bouncelands like Gruul Turf, gifting back four mana on the turn I come out and emerging from my portal for, effectively, free.

I can power out some ludicrous turns—some people have even tried using me in combo decks as a way of getting a lot more mana on turn five than any human has a right to expect.

The thing about multiplayer is that sure, Overrun-style effects win the games—don't listen to that stupid cat, life gain isn't the best multiplayer mechanic, trample is! (And trust me, I know—I make a living taming beasts like him.) Trample lets you smash past blockers that would otherwise absorb all the damage, allowing for some truly bone-smashing red zone plays. And when they're all at least 4/4s, you know it's gonna hurt someone.

With me, you can create a big, smashy army in no time at all. But what do you do with it?

Here's the trick: in a chaos multiplayer game with four or more players, it's very rare you can accelerate out into the lead and keep the lead. Once you've pulled sufficiently ahead of the pack—and say, did I mention that I bring my own pack with me?—then all the other players will get The Fear and gang up on you.

Does that mean that an early lead is worthless? Not at all! The trick when you're ahead is to choose a target and go.

Think of a rabid dog—if he's confronted with multiple opponents, does he take a bite out of one and then move on to the next to spread the love? No! He stays there, chewing the heck out of people until they die! And that's awesome!

If you get an early lead, pick the person who's most likely to interfere with your plans and crush them underneath your heel. They'll resist, of course, and others may try to stop you—don't waver. Everyone's going to be against you anyway, and switching targets in mid-assault won't help you; the guy you were originally beating will have some time to recover, and he will be nursing a grudge. Meanwhile, you most likely won't have enough firepower to take out Alternate Target-Guy in return.

Choose wisely, my friend. Think about what your deck is trying to do, and then seek the person who's most likely to interfere with that plan. Then decimate him, and hope the others can't stop the signal before you ride that cresting tide of blood to victory!

* Please note that you do not get to choose who your opponents damage. If you're at 2 life and you have a Jace Beleren out, you don't get to say, "Wait! That Shock goes to my planeswalker!" Your opponents can decide to remove you from the game instead.