Living in a (Wrath of) Godless World

reader sent this email in:

"Ferrett, I love your articles, because big chaos multiplayer games are my favorite. However, my friends and I are slightly card-challenged, and an ordinary game will not feature more than a board sweeper or two between all the decks combined. A lot of your advice often ends with 'Of course, you need something to recover from the Wrath of God,' which I totally understand is critical in your play group. Would you consider having your play group, as an experiment for readers like me, institute a week-long ban or restricted list on any and all board sweepers? I'm curious what your metagame would become, and what sort of decks/play advice your column could offer if you went a few games without fearing the WOG. Thanks!"

Alas, the answer is "no." The Internet holds the illusion that my group somehow listens to me. But no! I suggest Limited play, no dice—they want chaos multiplayer. I suggest Elder Dragon Highlander, they play it once, then never touch it again. I'd have more success herding cats.

That said, I do discuss board-sweepers a lot. They're a staple part of our local multiplayer metagame here in the Land of Cleve, and it's difficult to imagine a world without them. Yet I understand that some of you are building on a budget and can't scrape together a minty, happy set of Wrath of Gods.

But we do know what happens when you play without them, because periodically we all sit down and discover that out of the six decks we've chosen to play this time, not a ONE of them is packing mass removal... And the tone of the games are indeed very different. So let me discuss what to do when you can't find a Wrath of God.

Step 1: Get Wrath of God

I know, I know—you just said you couldn't get them! But hear me out, because a card like Wrath of God's a little different.

I understand many of you don't have access to a lot of cards. But on the other hand, getting a Wrath of God is an investment well worth it to a casual player, because (unless you play Standard-legal decks only), you'll use them for years to come. One full set will be useful for... well, for as long as you play Magic.

Let's be honest: Not every card is worth that kind of effort. A card like Countryside Crusher, for example, is a solid card, but it demands that you design a deck around it. Which means that if you pick up a set of 4x Crushers, you'll have pretty much one style of deck it can go in—a deck designed to abuse its power.

Wrath of God, however, can go in any deck with white. I have ten Wrath of Gods, accumulated over the years, and I've found a home for all of 'em. If you get your hands on a Wrath of God, it's well worth it, and you can often find them for less effort than you'd think.

Step 2: Get Kind Of Wrath of God

Hey, just 'cause you can't get the full Wrath of God doesn't mean you can't get a Wrath of God effect! There are tons of older cards that nobody plays because a) they've rotated out, and b) they're not as efficient as Wrath of God, but they still serve the purpose. You can pick up similar cards like Akroma's Vengeance, Catastrophe, Desolation Giant, Decree of Pain, Devastation, Hour of Reckoning, Jokulhaups, Mageta the Lion, Magus of the Disk, March of Souls, Obliterate, Plague Wind, Planar Collapse, Rout, Sunscour, and—my favorite—Winds of Rath.

And you can often get them for cheap. Look around for deals. People are more willing to part with cards that won't make the grade in Extended and can't be played in Standard—so with a little shopping/trading, you can sometimes find a four-pack of global destructiony goodness for a song.

I'm not trying to push an agenda here, but global destruction (when not abused) actually makes for a more interesting metagame. When people can't be assured that whatever they play might not be removed, it's a challenge to play.

Without a Wrath of God, the plan is simple: Draw it, plop it down onto the table. Why the heck not? With a Wrath of God, you have to decide when and how to commit. It's a more complex game that actually is more fun than seeing who draws the biggest and baddest creatures.

*sigh* But I haven't convinced you, have I? Either you, unlike your creatures, are resistant to Wrath of God, or for whatever reason you just cannot get your hands on any. So your next step is...

A valid stratagem. Then again, if you have four Akroma, Angel of Wraths and can't get Wrath of God, you're a pretty unusual player. Still, it is a way to punish people for not packing heat—there are few creatures indeed that can beat the mighty Akroma on the field of battle, and her protection handles most of the spot removal. 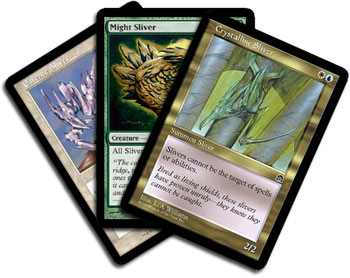 In a Wrath of Godless world, the Slivers are king. They grow in might with each additional Sliver, gaining abilities, and when you get four or five they become pretty unstoppable. Our rule at the table is "Shoot the Slivers," because even with a Wrath of God, they sometimes become overwhelming.

See, Wrath of Gods are sorcery-speed. And a well-timed Might Sliver or Essence Sliver can destroy you before your next main phase arrives.

Any Slivers will do, really, as long as they pump things, but the key ones (if you can get them) are:

Those aren't the core of a deck, but they're what you should be looking for—Slivers that help carry the attack phase. I mean, obviously Pulmonic Sliver is good, Fury Sliver and Horned Sliver make for bad choices for your opponents, Virulent Sliver can destroy someone with no blockers, and Psionic Sliver plus Fungus Sliver gets insane—but the point is that they all get good when there's no Wrath of God to fear. Sprinkle with any of the giganto-slivers you possess (Sliver Queen, Sliver Legion, Sliver Overlord), and you have a deck that people will be hard-pressed to beat.

Again, in a Wrath of Godless world, it frequently comes down to who can manufacture the most creatures. And if you don't have to have a card in hand to put a guy on the board, then you're automatically ahead of the game.

A card like Centaur Glade, Mobilization, or Dragon Roost will often destroy a metagame like this, given some time. The Selesnya guild of Ravnica is often a great choice—between Selesnya Guildmage, Vitu-Ghazi, the City-Tree, and Twilight Drover, you'll have a non-stop mana sink you can abuse. Imperious Perfect? Say, don't mind if I do! Or heck, just go with Riptide Replicator.

The whole point is that you'll be "casting" new creatures every turn, whereas they'll inevitably stall as they draw land. This will eventually pull you into the lead.

But if you go the token route, make sure you have defense in the air! There's nothing more frustrating than having a zillion guys on the ground, watching helplessly as the big dragon soars overhead to put their master out of his misery.

If you can't get mass, try lesser removal. Pyroclasm won't sweep the board, but it often will take out a bunch of annoying little guys, thus reducing the chance that you'll get swarmed. And come on, Pyroclasm's an uncommon! It's not hard. (Heck, substitute Pyroclast Consul if you must!)

Loxodon Warhammer, I'm calling you! Considering that you will be under constant assault from ever-growing armies, anything that can get you life (and thus some space to maneuver) is a Good Thing. As I said in my preview of Feudkiller's Verdict, you almost never want pure lifegain, but something that allows you to get lifegain on top of things (like Soul Warden / Essence Warden) can be very, very helpful.

This is obvious, but instant-speed spot removal becomes more critical in games with no Wrath of God. You don't want sorcery-speed, because by the time you discover that hey, Sarah over there has finally decided you need to be removed, it's too late. No, you want hasty stuff that comes out quick and kills.

Make sure you have at least four to eight slots devoted to pure, banishing goodness if at all possible—and keep in mind that red doesn't have much in the way of banishing goodness. Red's removal is sadly numbers-based, which means that it's useless at hitting large creatures (barring coolness like, say, Fissure). Which means you're generally going black.

Stockpile your ammo, if you can. Particularly in a big game, if they're not attacking you, let them pound! Heck, your opponent will either waste their spells (a net for you) or be weakened (also a net for you), putting you ahead. Only when they do come after you do you release the Kraken.

Sometimes, you won't be able to kill something (or killing it won't necessarily stop it if it recurses). In Wrath of Godless games, it becomes an okay thing to play enchantments like Faith's Fetters and Utopia Vow, which halt some ugliness in its tracks.

Overrun effects are your friend when you're playing in a Wrath of Godless world. You want big, dumb tramply things that make it hard for your opponent to block profitably, and will hurt him even if he does. A surprise thunder attack from nowhere is a Good Thing.

An "unstoppable" is a card like Immaculate Magistrate or Wellwisher—a card that, if not destroyed immediately, makes it almost impossible for your opponents to win the game in a few turns as it keeps churning out increasingly-ludicrous effects that are hard to stop. Chances are good that it'll get popped, of course, but again, it's a win-win. If it goes, you've just drawn out some removal that would have been used on a larger, bigger creature later on, and if not you get a benefit. WINZZZOR.

... but not always; it depends on how much above the power level of the rest of your metagame you are. There is the chance that an unstoppable might draw unwanted heat as everyone realizes the danger and teams up to kill you, so finesse this one as best you can.

Metagames without Wrath of Gods can also be easily susceptible to combo—but again, if you don't have the cards for Wrath of God, chances are good you're not going to be able to assemble a good combo, which relies on redundancy.

Wrath of Godless games can be won. But I always say, put the fear of God into your opponents.