Magic: The Next Generation

you've been playing Magic for more than a few months, you've probably met someone who hasn't been playing as long as you have. Every month, Magic: the Gathering gets a new injection of players – friends of friends who love the game, returning veterans who've heard something new they might like about the game they used to play, and of course kids who just got old enough to figure out the rules. 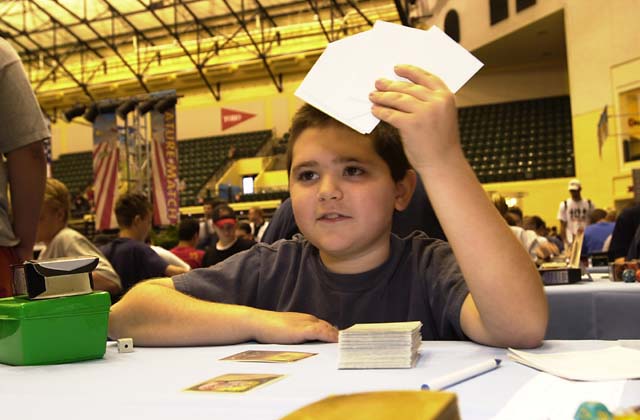 It's this last group I want to spend some time on today. Casual players have many roles to play in the Magic world; but perhaps the most important is taking the time to help out those younger players who are still getting their feet wet. It's not that tournament players aren't capable – they're quite available, and often willing, and certainly good enough – but casual players are usually more available. They also tend to be more willing, since they're at the local shop to play around with any deck and any player, rather than test for the next tournament with a specific deck or strategy in mind. And they're also certainly good enough, because you don't have to win a Pro Tour to share your enjoyment of the game with someone who wants to learn.

So the role of teaching the next generation falls mainly upon us. Some of you no doubt have already helped many younger players; but many of you probably haven't had (or taken) the chance. To both groups, I'll be offering some food for thought.

The Three Steps Of The Apprentice

Let's cover the curriculum first. Magic is a complex game, but you can make it simpler by breaking your teaching down into three distinct parts:

1) BASIC OBJECTIVES AND TOOLS. The first thing a new player needs to learn is what she's trying to do and what she has that can get it done. That means covering:

There will be a natural inclination to get into stuff like evasion, creature removal, and so on. Don't do it just yet – or keep it at hints for now. For the first game or so, just keep it at simple back-and-forth between animals on the ground. Let them see a mana curve work (preferably without using that specific term), let them catch the flow of the game and realize the tension that grows as life totals shrink, and so on.

2) INTERMEDIATE OBJECTIVES AND TOOLS. By “intermediate”, I mean two things. First, I mean it in terms of advanced concepts. You can wait to explain alternate win conditions (e.g., milling or poison counters) for quite some time. So wait on that stuff until the player has the hang of winning through pummeling.

Other more advanced concepts to cover after the first few games: evasion (flying has likely come up by now, but don't forget trample…and then as they come up, block-specific evasion like flanking and shadow), creatures with protection or comes-into-play abilities, creature removal, and non-creature permanents in action (stuff like how Ensnaring Bridge can totally mess up a game).

The other way I mean “intermediate” is in goals and tools that get you part way to your ultimate goal. For example, at some point during the first few games you play with this person, you might find a poignant moment to point out life gain on its own isn't as helpful as a resource (like a good blocker) on the board. Or you might play a Fireball to kill two creatures, and mention in passing the basic notion of card advantage. (No need to get overly theoretical! Most people will understand that cards represent options, and more options is good.)

In other words, while you grow your protégé's understanding of how they can win, you show them the things that happen in the middle of a game that give them a bigger chance to win.

3) STRATEGY. So far (by which I mean at least 10-15 games of instruction), you should be doing everything you can to avoid saying, “you should” or “you shouldn't”. The first few games are best spent showing new players what they can and cannot do. Why yes, you can attack with a 1/1 right into my 3/3. No, you cannot Shock my Pristine Angel. Yes, you can Naturalize my Rancor or my Darksteel Gargoyle.

All of these things may be fruitless, but letting new players make a few basic mistakes will do far more to teach them than your (or my) prattling. Let them watch what happens. If they smile, move on. If they look tremendously frustrated, let them take it back. You don't need to say another darn thing. The wheels are working in there, just like they used to work for you. Your job for at least a little while is to stay out of the way.

When will your friend be ready for strategic advice? When she asks for it. If you've gone 20, 30 games over the space of a week and she's still doing something maddening like playing Creeping Mold on your third plains instead of your lone Arcbound Slith, then try a subtle offering here and there. The best way to do this is to critique your own performance: “I've got a really interesting decision here. I can Lightning Bolt either your Squallmonger or your Juggernaut. I'm ahead in the life race, so I think Juggernaut's the best option. Guess we'll find out!” If you're right, you breathe a sigh of relief and let the result speak for itself. If you're wrong, you admit it and laugh it off. Long explanations of how lucky she was that she topdecked that Rolling Thunder because you had 31,276 solutions in your hand or coming up in your deck…well, that's just not that helpful to a new player. (More experienced players don't have much use for that sort of thing, either.)

Strategy topics you'll hope come up within the first month or so cover both deckbuilding and playing:

I'll bet there are at least a dozen different aspects of Magic rules or strategy I've forgotten. (Heck, you could glance at a rule book or web site and see them immediately.) You know what? It doesn't matter. Don't add them to the list until your friend asks about it, or until it's obvious that her not knowing is ruining enjoyment of the game. You've got weeks, maybe months or years, to play with this person. Many of us are still learning the game after five or ten years. Why rush things? Enjoy the game.

How you teach your protégé depends a great deal on how old he or she is – and how old you are. For this article's purposes, I'm assuming you're at least a couple years older than the person you're teaching.

For those 12 and under: Generally, kids this age understand combat math and mana cost just fine, with practice. The problem is, they can't see too much further than a turn or so when they're playing. Deep discussions about card advantage or wars of attrition won't go too far, for at least several months. “Kiddie cards” exist for a reason – kids love them. Instead of begrudging them the occasional expensive beast, why not peel a few years off your own age and indulge yourself? It's good fun, like jumping on a trampoline for the first time in 20 years.

For those 13 to 17: Somewhere during the middle school years, kids start to figure out long-term consequences of short-term actions. (Of course, as driving records prove, they still suck at it on average until they're, oh, 30.) Terms like “card advantage” and “mana curve” will mean a lot more to this group, and more quickly too. As any father will tell you, the best way to teach this group is merciless pounding…ahem, hang on, I mean watching them carefully and listening to their concerns.

In all seriousness, these are kids you'll meet more often than the younger crowd, because they're allowed into many local shops by themselves. So nurture and encourage them. Be polite to their parents, if their kids let them near.

For those 18 and over: As I said, this article is dealing mainly with the younger set. At this age, you're probably accelerating some of the learning I've suggested above, and you also probably know the person well enough (e.g., a college roommate, a work buddy) where any advice I'd give you is moot. Follow your heart.

No matter what age you're dealing with, it's always helpful to have two or three decks that are simpler than the others you carry. (This doesn't have to mean red/green; but don't be surprised if you end up there.)

Occasionally, I stereotype all of us Magic players. It's highly enjoyable. May I do so again? Thank you.

We're highly intelligent. And we like for everyone to know it. We talk fast, use complex terms, and show off how much we know by pulling off cool tricks. If we're men, we do this twice as often as we'd like to admit. If we're men teaching women, we're impossible.

Whether you play to the stereotype frequently or rarely, you should be clear on one thing: ego is a teacher's worst friend. Conversely, humility is your best aide. It helps a great deal to be able to put yourself in the shoes of your "student" and try to remember how it feels to grapple with a complex game.

Bless you for taking the time to teach others. The point here has so little to do with Magic, and so much more to do with the way we treat other people. I hope you get at least as much back as you give.

You may email Anthony at seriousfun@wizards.com. He cannot provide deck help.