hen we have a Magic evening with just four of us, there is a little part of me that cheers. As far as I'm concerned, four players is ideal for Magic. You can play two duels or a Two-Headed Giant game, and Planechase games work best with four players. My personal preference is multiplayer and I like it best with four players. I find the games move faster. As soon as one person is knocked out, the equilibrium of most games falls apart and things tend to move to a rapid conclusion from there.

But not every game follows that plan.

This game was a four-player Commander game. To truly understand the game, an introduction of the players is in order: 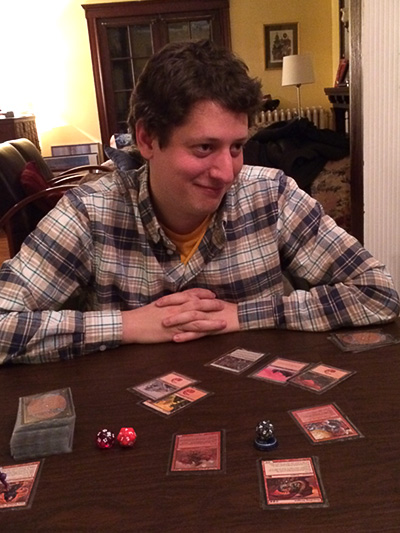 Jesse was running Jaya Ballard as his Commander, and he embraced Jaya Ballard and the red "Burn Baby, Burn" ethos to a T. There were some unique cards in the deck (Active Volcano and Red Elemental Blast, for example), but for the most part, you knew that Jesse's creatures were going to your face, and so were his spells. While Jesse's decks may appear relatively straightforward, Jesse most definitely is not. He makes plays the average player doesn't see or follows a line of play that only makes sense when he reaches the end. 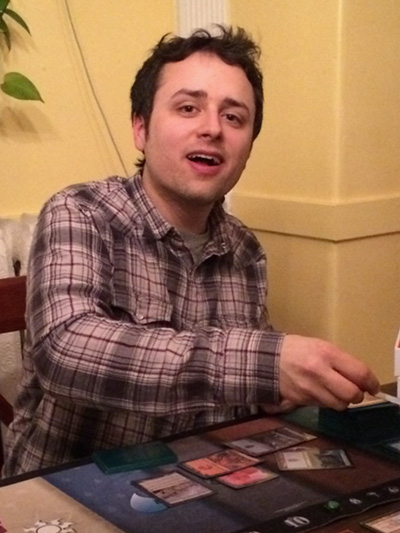 John was running Melek, Izzet Paragon, as his commander. This is exactly the type of commander you would expect to see from John. John, conveniently enough, embodies the Johnny spirit. He loves to take the average card and turn it into something amazing by running it with another card. With John, you can anticipate quirky combinations of cards you wouldn't expect. His decks are always interesting and generally win by coming out of right field.

Josh was running Child of Alara as his commander. Josh is the Commander player in our group. The rest of us build Commander decks as an afterthought, but for Josh, Commander is his preferred multiplayer variant. When we play sixty-card games, more often than not, Josh will shuffle his Commander into the deck and just play that. Josh spends a lot of time working on his decks and it shows. In most of our games, I see him as one of the players to watch early on, and in Commander games, I'm reluctant to do anything until I know exactly what Josh is doing. 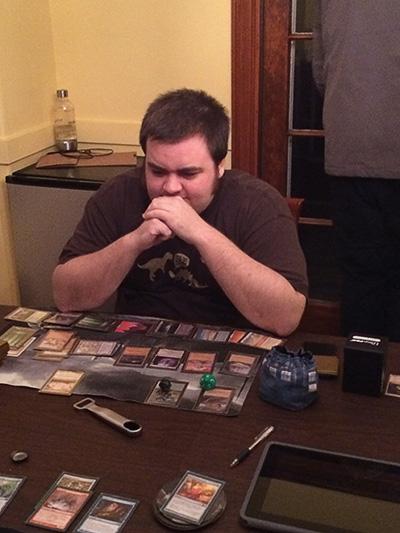 I was the fourth player in the game, running Sedris, the Traitor King. The deck itself is very susceptible to graveyard removal. I need Sedris in play with a sizeable graveyard before I can start to do anything. With a Commander like Sedris, I'm pretty much announcing this to the rest of the players. I've had more than one game end up rather dull for me as I draw cards that offer very little resistance without being able to unearth them. On the other hand, players tend to leave me alone, precisely because they believe they can deal with me at their leisure. I've stolen wins because someone waited just a little too long.

The game started like most Commander games do: snacks, beverages, and land drops. My early board state left me with only two lands on the battlefield. After a Whirlpool Warrior let me try seven new cards, I was able to add more lands and a Crystal Shard. During Jesse's turn, I also added a bottle of Coke and a plate with a couple of slices of Costco Pepperoni Pizza. This was a minor improvement in the state of my battlefield and a major improvement to the state of my mind.

In an effort to bring you only the most accurate recounting of the game, I was recording it. The novelty of recording a game was not lost by our group. A representative sample of the evening's recording is produced below:

Bruce: "...with a few more beers, we'll get even more colourful 1 commentary!"

Jesse: "This game brought to you by Sam Adams." *displays his beverage of choice*

Bruce: "What is the variety of Sam Adams?"

Jesse: "For this game, it is a Maple Pecan Porter. I do not recommend it with pepperoni pizza."

Jesse: "Also, fun fact, the man on the bottle is not Sam Adams. It is Paul Revere."

Jesse: "Promotional consideration for this game also brought to you by Costco and Coca Cola."

We are an... unusual group.

By this point in the game, Josh's game plan with Child of Alara was becoming obvious. His deck appeared to have a small handful of creatures but was primarily land. The Child was simply a way to wipe everyone's board, while keeping his more useful lands in play. Since most of the removal in the game would be focused on creatures, I was pretty sure Josh would be the biggest problem for the rest of us, so I limited my attacks on the other players and focused on Josh.

I talked to Josh after the game and he was gracious enough to provide me with his list. He describes the deck as being in the early stages.

Josh and Jesse both opted to play Kher Keep within turns of each other. Given the Sam Adams theme from earlier, a Sam Adams bottle cap with a die showing the number of kobolds was used. 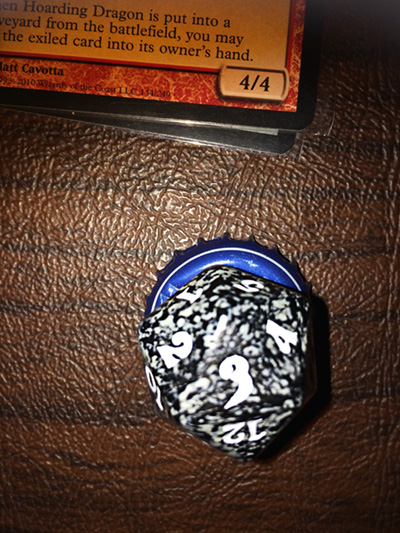 At this point, it was clear that I was not the only one worried about Josh's ability to wipe our board state on a regular basis. John played Control Magic and took Josh's Child of Alara. I let John know that, should he choose to use it in an attack on Josh, he could rely on my Minamo, School at Water's Edge to untap the legendary creature. I do love some table talk.

The next important play was Josh playing Crucible of Worlds. For many of you, this sets off alarm bells, as the Crucible can easily combo to destroy everyone else's lands and give you a win. Josh specifically said that he doesn't use it to combo out. Our group frowns on that sort of thing, and Josh doesn't lie about that sort of thing, so the game continued without much change. I could see how Crucible would be very handy, even when you aren't planning to use it as a combo piece.

During another deck shuffle, John shared his sponsorship ad:

"Smutty Nose IPA, featuring two random grumpy old men on the bottle; not the Grumpy Old Men from Minnesota. Of note, there is also a shuffleboard on the bottle."

John isn't just a Smutty Nose–drinking Minnesotan, though. Soon after, he announced his Curse of the Swine, targeting Josh's Meloku the Clouded Mirror and Seedborn Muse, and Jesse's Avatar of Fury and Hoarding Dragon.

I'd like to say I was lucky not to be targeted, but luck had very little to do with it. I still had no threatening creatures or particularly scary board state, and we were more than a half an hour into the game!

At this point, I started to ramp things up, adding a few creatures and working on my game plan, which involved getting my creatures into my graveyard, so I could unearth several of them on one turn and wipe someone off the board with Pandemonium and combat damage. After a long while, I had reached the point where I had several creatures in play, and the board state was more than just a pile of Boars from the Curse of the Swine. This is when Jesse chose to play Blasphemous Act.

When he did this, I expected to see him drop one or two real threats on the board, but instead he followed it up with Nevinyrral's Disk. This proved to be very effective. While he had no intention of blowing up the Disk right away, it was used to lock everyone else down while Jesse had a chance to build his hand and have the battlefield set exactly the way he wanted it.

The downside was this had little effect on Josh's board development. The Disk doesn't get rid of Josh's lands and he was happy to let someone else clear off the board. I suspect Jesse was aware of this limitation, but ran with it anyway in the hopes of making himself a less appealing target to Josh.

At this point, the game bogged down. Minimal moves and a couple points of damage here and there, but for the most part, nothing happened, assuming you didn't count the lengthy discussion of the LEGO and Marvel movies. Jesse admitted to having seen every Marvel movie in the theatre. Every one of them.

And he said it with pride! I felt sympathy for him.

Before the conversation went much further, I drew and cast a Sphinx of Uthuun. That in and of itself was irrelevant. The cards I drew were unexciting and the Sphinx, while a solid creature, isn't something to make you sit up and take notice. What was interesting was the kicked Rite of Replication John cast, making five copies of the Sphinx.

Five Fact or Fictions. It was beautiful.

In situations like this, I often look to give a gift to an opponent (the five-zero split), hoping it will put his focus elsewhere. In this case, though, John was going to have far more cards than any of us would want him to have, so I made my splits very carefully. John wound up netting twelve cards from all the Fact or Fictions and I expected him to be in the driver's seat. With five Sphinx of Uthuuns, a Thassa, and a couple of guildmages, I expected John to be able to make short work of each of us in turn. He managed to take out Josh, and then turned his attention to Jesse.

Jesse had several creatures in play, so John opted for the Cyclonic Rift route. He overloaded a Cyclonic Rift to take out everything.

Instead, Jesse blew up his plans with Fork.

The rest of the game was irrelevant. It took a while, but eventually I managed to steal the win after Jesse did the heavy lifting to take John out of the game. We wrapped the game after three and a half hours.

That's right, three and a half hours.

Maybe not every four-player game is ideal. The game was plodding, but still had interesting moments frequently enough to keep things happening. It was a chance to hear about future work plans, bad jokes, and a Bruins fan get upset with me over the Canadiens picking up Vanek at the trade deadline.

We'll look at ways to improve our decks to speed things along. We'll consider lower life totals and other variations to try and get more games in over the course of an evening. But we'll be back again next week, ready to battle and share more laughs over this great game.

1: This was a quote from the Canadian at the table, thus the proper spelling for "colourful" was used.