A Maze of Multiplayer

ne of the things I love about a new set are the various set reviews. I flip from one to the next, getting a sense of what each player likes about the new set. Some look at Dragon's Maze cards from a Limited perspective, determining how the cards stack up against each other and where they might pick a particular card in drafts. Some look at the Constructed formats. "This card is amazing in Modern!" "This card has implications for the Legacy format." "This card will be a bomb in Standard!"

There aren't many of us who do the same for the various multiplayer formats. There are some of us out there, but even then, most are focused on Commander. I look at cards through a sixty-card multiplayer-format lens. And none of this 40 life stuff. Get your defenses up fast; 20 life is all you get!

So what does Dragon's Maze have to offer? Let's take a look at a few cards that especially shine in multiplayer.

I know this is six mana.

I know this is a sorcery.

The real problem with the card is that the two abilities don't work well together. Generally, you want to draw cards immediately. If I'm holding a card that lets me draw three cards, I don't want to wait a turn to play it, I want to play it now. I want as many options as early as possible. Different draws demand different plans of attack. Moving down one path only to have to switch directions in a couple of turns because of your next draws is not something you want to do. Thusly, drawing cards is something you want to do right away.

Direct-damage spells are a different story. You don't want to waste Burn hitting an opponent for 2 damage when he or she plays a creature the next turn that you absolutely must eliminate. Damage spells are cards you generally want to hang on to for as long as possible, particularly in multiplayer games. Why kill an opponent's creature when it might attack someone else the next turn?

When you put these abilities together, you get a card that you want to play now... and later. So, why do I like this card for multiplayer? This is a single card that allows you to draw three cards, and destroy the creature of your choice, in one fell swoop! You are going to play this as soon as you have a card in hand that is big enough to destroy the creature that is most problematic for you. And you are going to draw three cards. Two abilities on one card is a great thing.

The real benefit in multiplayer is the plethora of targets available for Blast of Genius. There will almost never be a time when you could cast this card that there will not be a creature to target. If you are really setting it up, Blast of Genius and a legendary Eldrazi will do serious havoc and let you shuffle your graveyard back into your library.

Let's get this out of the way: this is bonkers in Commander. Yeah, yeah, we get it. You start at 40 life, so you have already met one requirement. Blah blah.

As far as the 20-life, sixty-card multiplayer variety goes, the Blood Baron is still amazing. With multiple opponents, the chances of at least one of them being at 10 life or less are far better than they would be in a regular one-on-one game.

Just keep in mind that if you want him to be more than just a 4/4 creature with lifelink, you will need more than just the Blood Baron of Vizkopa to get you there. The Blood Baron by himself will take too long to actually get your life total to 30, particularly with multiple opponents ready to attack you back down to a more manageable total. More lifelink creatures (or even the oft-hated Congregate) are a good start to helping the Baron be all that he can be.

Any card that says "from a graveyard" rather than "from your graveyard" is going to be better in multiplayer than one-on-one. The joy of stealing your opponent's best card from his or her graveyard is increased with multiple opponents. The likelihood of hitting a great card goes up. The likelihood of completely messing up an opponent's plans goes up. I just love these cards and Entering does it all.

Adding Breaking to the card just ups the awesomeness. If you know your opponents' decks, you'll likely know if targeting an opponent instead of you with Breaking is the way to go or not.

Debt to the Deathless

In the beginning, there was Syphon Soul. I loved that card. In a four-player game, you spent three mana to do a total of 6 damage and gained 6 life. Most people didn't care about losing a couple of life, so you got away with it, and scored a nice little bonus.

In my four-player games, I can regularly see spending six mana on this spell. Adding 12 life and taking 4 from each of my opponents is a great option.

With Debt to the Deathless, I recommend you roll big. Hitting an opponent for a couple of life points is not a big deal, and will often be ignored. Hitting for 6 points becomes something that draws real attention but still leaves all of your opponents in reasonable shape. It makes sense that if you are going to feel the wrath of all your opponents, you would be advised to swing for the fences and really hit hard. Spend ten mana and take the damage right off the chart! That will likely kill off some of your opponents and leave the survivors barely clinging to life.

Check it out, another card that says "from a graveyard!" Flesh lets you scavenge a creature from any graveyard for five mana. This just straight up rocks for many of the same reasons Entering does. With so many ways for players to abuse their graveyards, exiling cards out of them is a Good Thing™. Getting a bonus that involves permanently pumping up one of your creatures is a Better Thing™. If you fuse the card, you can add insult to injury, making the Best ThingTM. A little Blood in the water will likely send a creature in play to replace the one that was lost from the graveyard, and it doesn't even cost you a second card!

Lavinia of the Tenth

Technically, this card does the same thing in one-on-one that it does in multiplayer, but I'm including it anyway. It isn't often that you find a single card that locks everyone else's permanents down for a full set of turns while you get a free ride. If you can find a way to make it enter the battlefield (Nephalia Smuggler) on each of your turns (Mimic Vat), before combat (Deadeye Navigator), your creatures can simply attack unmolested until everyone is dead.[1]

Just so I'm clear, I am fully aware that this is the softest of locks. Flash creatures blocking, or any well-timed removal can deal with this easily. I'm just saying that this would definitely force your opponents to act immediately. If you start attacking someone and that opponent does nothing, you know it is only because he or she can do nothing. 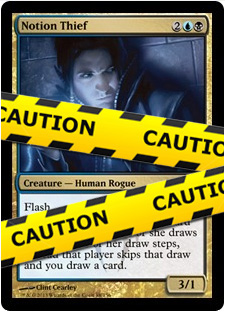 This card is not here because I think it is a great card in multiplayer formats. This card is here as a warning.

Most multiplayer metagames I've played in include significant extra card drawing. Edric, Spymaster of Trest; Howling Mine; and the dreaded Consecrated Sphinx are all a part of the various metagames I've been involved in. Notion Thief would appear to be delightful. It limits everyone else to one card per turn, while you draw again and again. Extra cards is always a good thing, right?

Read Notion Thief again. That card draw for you is NOT OPTIONAL! This is Dimir folks; the thief does not stop feeding you notions! A five-player game with a Howling Mine out means you are drawing six cards per round, whether you want them or not. You will need to pack ways to destroy or sacrifice the Notion Thief as you get closer to the bottom of your library.

Consider this your warning...

I've saved my personal favorite for last. I love extort and I've been trying to make it work in multiplayer for some time. The Pontiff really opens up the options. Rather than adding more effective creatures to the deck in place of the creatures with extort, my extort creatures will now be able to extort twice!


This is still a work in progress, but the general idea is to set up a solid defense, then flash in Whitemane Lion at the end of a turn (and return it back to your hand), extorting it as often as possible each time. Sun Titan does a lot of heavy lifting, which explains the Seals and other permanents that cost three or less. The Pontiff of Blight really sets this up for the long run, making repeated extort triggers much cheaper. You can expect to see this deck featured in future articles as I get a chance to play it more often and tune it more and more.

[1]I should mention that this just sounds miserable to me. If you plan on doing this, please have a way to finish everyone quickly. A lock like this will leave your opponents hanging on, believing they just need to find some removal to end the misery. Thus, they will not concede, and it becomes a miserable game where you do some damage on your turn while your opponents pray that the next topdeck will save them all. Don't do that to your friends. Be ready to quickly crush them underfoot like the puny bugs they are! [Return]