ow do you build your decks?

It's a broad question that has many answers. How you approach Draft or Sealed Deck is different from something like Commander. While I will gladly leave Limited deck construction to the esteemed Steve Sadin, approaching laidback Magic is what I speak to best. When we dipped into the idea of building decks of different power levels I was light on specifics, aside from what went wrong with the deck I had.

This week, I want to cover the opposite direction and build up a deck that meets our new needs. I've shared why I want to engage Commander again. Now I can walk us through a plan to get there, and how it worked out.

There are many ways to slice building decks for Magic. I've reduced my process to just three main decisions:

This is simplified but easy to follow. The progression is natural because we're asking a logical sequence of questions:

The devil is in the details, so let's put concrete answers to all of these by building my latest Commander deck.

Theme isn't just a flavorful and creative way to consider decks. For competitive formats, the answer to "What do I want to do?" is most likely "Play the best deck" or "Attack the metagame I expect." Theme is simply what you want to play.

Since I needed a new Commander deck I considered my pile of legendary creatures. I couldn't remember the last time I played a Grixis—blue, black, and red—deck with a hundred cards. I also have three different options for a commander:

This fulfills my desire for having multiple options for commanders. My premium copy of Garza Zol, Plague Queen beckoned me to build a deck, but upping the ante into Thraximundar or switching gears down to the humble Sol'kanar the Swamp King let me scale the threat level as needed.

All three also support the things I enjoy about Grixis:

That's a lot that I put into Grixis. This is a good thing for Commander. The next step will fill out even more things to add.

Given that my last deck was built around Maelstrom Wanderer and being as powerful as possible, I knew my choice this time would be different. I wanted the "casual Commander" experience. If you've played with any of the Magic: The Gathering Commander preconstructed decks then you know what I wanted:

Could I be looking for repeatable card draw, defensive enchantments, or board sweepers? Sure, and that may be what you want to do in Commander. I wanted something other than that usual suite of experiences, and these ideas will lead me away from overloading oppressive power.

With our governing theme and the experience outlined, it's time to get picky.

Having all of these ideas to fulfill with cards is awesome for Commander. Seven ideas is a solid number, but I went back to the preconstructed decks for inspiration. What thought went into these decks? Why are some cards in here?

My answers led me to add three more ideas:

Do these ideas add randomness, variety, and uncertainty to the deck? Yes, and that's what I saw in the preconstructed decks. It's okay to have awesome things for the sake of awesome, different cards that may or may not work out, and classics to relive that proved their power. That's part of Commander's mystique and why I love the format so much.

Filling in the Blanks

Choosing cards is fun. It's what I enjoy most about building decks, and Commander lets me pick almost everything I want up front. This is how I filled out these ten ideas. 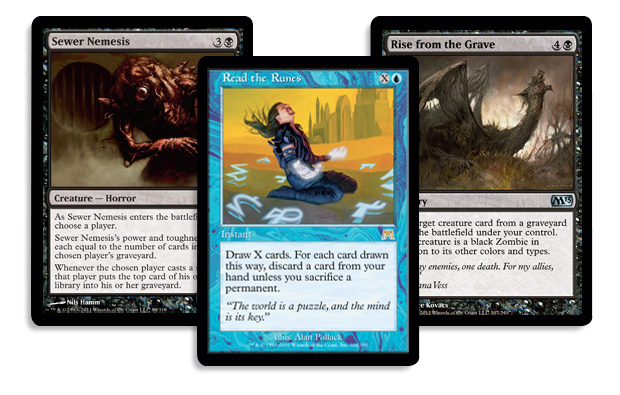 Sewer Nemesis, Read the Runes, Rise from the Grave

I associate the graveyard with Grixis so much I split the action into three subtopics. Whether it's creatures that take advantage or feed the graveyard, spells that quickly fill it up, or the usual suspects for recursion, everything I want gets piled in. Grixis owns the graveyard, and so should my deck.

I'm leaning away from sweeping the battlefield every turn, but it's still okay to include things that will. Ideas aren't absolutes and rules, but magnets that draw types of cards out for you.

Before Griselbrand met his ban in Commander I had loaded a deck up with every Demon I had. While a few were sprinkled into this deck, I wanted to see other cards I haven't played in some time.

Some cards just ooze the awesome of Grixis, and these do it for me. I can't think of any other decks I've made that want cards like this more.

I gladly packed in cards like Darksteel Ingot and Chromatic Lantern because there were plenty of things to do at six and seven mana. Being unafraid to leap into big things helps flesh out lots of other ideas.

Serious Fun has a rich history of awesome things for multiplayer. Celebrating that makes sense in a deck designed for serious fun. (Ha!)

Staples for Commander are easy to know. Sol Ring and dual lands are the most common to think of, but I reached further for ones that fit my themes. I'm also not the biggest fan of Sol Ring, so I rarely include it anyway.

What's awesome or terrible is always relative. Discovering how I'd like some cards would make every draw step exciting.

I've Seen it Work Before:

I steal like an artist, borrowing themes and ideas from others to use in new ways. While the mechanical work a card does won't change from deck to deck, the context I include it in is unique to me. Stolen, but made anew.

Pulling all of these ideas together resulted in a deck I was proud to take with me to Grand Prix Philadelphia.

I was able to play four games over the course of the half-weekend. Running away from Hurricane Sandy cut things short, but I was able to feel out what this deck could do.

The good and bad is just how decks works. There is no perfect deck for every game, but contributing to a better game for everyone with a few minor hiccups along the way is a solid first pass in my book. It's the ugly that took me by surprise. Here's the set up:

With Mikaeus out I could use Evil Twin to kill Sewer Nemesis but get it back immediately, triggering Flayer of the Hatebound. Dealing 30 or more damage in one shot kills players quickly in any format, even Commander. With Havengul Lich, I could recast these guys from the graveyard, too. I quickly knocked three players out before a Relic of Progenitus put a stop to things.

You might be asking, "Why did you do it at all? Just choose not to!" I didn't do this at first, but another player had a Meishin, the Mind Cage out with seven or so cards in hand at all times, and was using Font of Mythos and other card-draw effects to stay full. Nobody's creatures could attack, so I nuked that player out first.

Once I started down that path of knocking out players I decided to keep going: Either I'd be stopped (which happened) or the game was over in another turn anyway. After an hour of playing I think it was reasonable to move to end it. These decisions are always a judgment call, particularly when you didn't intend to set it up from the start.

Would you change something in this deck? I'll let you know what I decide later.

Join us next week when we recycle an idea into something new. See you then!