Like every Magic player ever, I think I'm pretty clever and intelligent. When I think about how I experience Magic I believe I have a strong handle on how I approach things. Since I'm constantly writing about these awesome cards, and the things we can do with them, some self-reflection naturally weaves itself in. 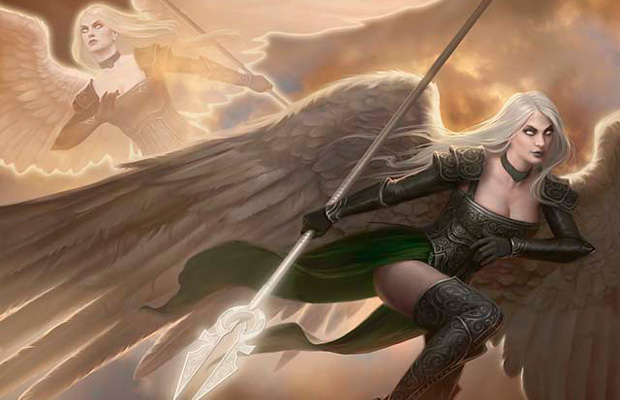 I've spoken to my Cube and Commander decks regularly, but I had a startling realization: my sixty-card habit has been neglected.

Hubris aside, it's really readers (yes, like you!) who help shape where my keyboard wanders every week. And as much as I could drone on about the "Greatest Limited Format Ever®" or "Ye Olde Elder Dragon Highlander," I know many of you enjoy the more usual flavors of Magic.

The incremental count of emails asking for non-Cube, non-Commander coverage had reached the critical threshold, and I had some dusty decks to clean up. It's time I start keeping up with the jonesing for new cards.

An Ally In Need

It's no secret I'm a fan of creatures with the Ally subtype, so I keep an Ally deck on retainer at all time.


If that looks familiar it's because it should. I've tinkered around with this deck for several years now since I'm a bit nostalgic about it. If you're a long-time reader of Serious Fun you'll note that it's, essentially, the very first deck I wrote about in my very first article here.

I looked back over the past games I've played with it and I realized that despite really digging the Ally shtick, I didn't really enjoy how my deck worked. I wanted it to be aggressive and fast. While the slight modifications had helped it, it just didn't have that panache I was looking for.

Do you know that strange feeling when things look good as ideas, but just don't feel right when you try them out? That's all I felt about this deck.

I took an inventory of the things I liked about the deck:

I also knew a few things I didn't like:

Fortunately, Avacyn Restored helps change all of these. The first was to add one little spell that was an all-star over the weekend's Prerelease events.

Cloudshift is sweet in Avacyn Restored thanks to soulbond. Casting it during combat was always a recipe for creating an explosive moment. Ally creatures, if you somehow overlooked it, really enjoy getting to enter the battlefield repeatedly. They throw a party every time another one shows up. In the same vein, Restoration Angel plays well since Ally is most definitely non-Angel.

Since so much awesome white is flickering for attention, I think it makes sense to revisit the Allies we're working with.

We have just two colors of creatures, and more flickering effects to work with, but the Eldrazi Monument problem still stands. For five mana, Cathars' Crusade not only replaces Monument for the same cost but actually feels like a good fit for the deck. It also covers what Kazuul Warlord used to do for us.

This is what I'm looking to create once I get my hands on more Avacyn Restored:


That feeling I talked about before? Feeling good in theory? I get that feeling here, but I don't think I'll have the same issues. It's loaded with cheaper creatures, more flicker options, a straightforward set of lands, and the last-second "Oh yeah!" addition of Aura Shards to round out a complete revision.

But Allies aren't the only old friends I need to reconnect with.

There's another deck I keep around, but I play it far less than any deck should be played. It's something that's a decidedly different flavor of action from the usual "Creature. Attack. Dead?" progress I employ elsewhere.

It's a deck that makes players mill cards—put them from the top of the library into the graveyard—to kill them (when they no longer have any cards left to draw).


I've toyed around with giving this a facelift before but I just never mustered the final effort—sliding Nephalia Drownyard in was as far as I had made it.

This time I'm going for broke.

Unlike the Allies above, there isn't anything I feel bad about here. It drops a few defensive creatures, goes looking for some anti-library action, and tries to hold out until the opponent fails to draw a card. What can be helped is how well we can defend, how efficiently we can mill, and which cards let us do both together. And it's not even all Avacyn Restored.

Dark Ascension, I feel, holds some of the keys to a new deck. The first is Thought Scour: it's an instant that moves us one card closer to all-stars like Glimpse the Unthinkable, but helps move our "mill you" game plan along too. Unlike Scarscale Ritual, no creatures and self-inflicted harm required.

Another card from Dark Ascension is a doozy: Geralf's Mindcrusher. It's arguably easier to cast than Nemesis of Reason, but provides it's milling action right up front along with a slightly more power-based body. While Nemesis of Reason can block very well, Geralf's Mindcrusher can help discourage an attack altogether. While our opponent will have more control over whether Mindcrusher gets to go through undying or not, the longer he or she waits to battle through it the more time we'll have to dig up the cards we want. 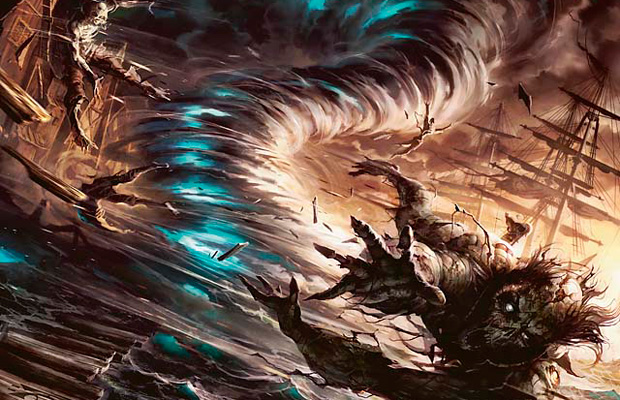 While awesome updates were a little older, Avacyn Restored has the tricks we really need. And it starts here:

Devastation Tide is an all-stop on action. Unlike Evacuation or Inundate, this strips back everything cast down to the battlefield. The only nonland permanents we're using are some creatures, so it's our opponents who will be reset harder. And since some of our defensive dudes carry transmute—a tutor ability we can only use from our hand—we'll have a second chance to find our best ammunition.

And when we get to use miracle to bounce everything on the cheap, we'll have even more time to finish off our opponent's library.

A much less splashy card from Avacyn Restored is Galvanic Alchemist. It doesn't look like it does much, but it's a subtly useful card for us. As part of the Horned Turtle family, it's 1/4 frame suits it well to playing defender. But it's the soulbond rider that completes it. When Nemesis of Reason comes down, we can pair it with the Alchemist. Attack, pay

, and keep a 3/7 on defense while milling ten cards.

Does that grab your attention? It sure grabbed mine.


I took the liberty to upgrade a few things along the way. Preordain feels like a great card when we want to dig for something specific, and the mana before wasn't working well with the plan, so smoothing things over seemed like the right idea. Of course, upping the ante with Snapcaster Mage—to obviously rebuy a spent Glimpse the Unthinkable—would be wonderful too, but not every blue deck needs to be packing him these days!

While getting our hands dirty with new deck adjustments is always a great part of experiencing the set, it was just over the weekend most of us had our chance to feel it firsthand:

Just about three quarters of us headed out to our local game stores for a Prerelease, and a whopping half of us knew there would be a Helvault to crack! I was more than a little excited when I saw the awesome extras packed inside.

Whether you enjoyed this type of event or not—I sure did!—be sure to share your thoughts with the powers that be: Mark Rosewater, Aaron Forsythe, and others within the walls at Renton want to know how it was for you. (And as a quick reminder, I'm not inside those walls, so while I, too, love to know your experiences I don't get to decide on what comes next for us!)

As the question suggests, I'll be attending Grand Prix Anaheim as a guest for spellslinging, Commander action, and everything else awesome I can get into. Since some of you will have a chance to stop by and play against one of these decks, I felt it only fair for you to help choose which one I'll have available!

Join us next week when things go pro. Catch you then!