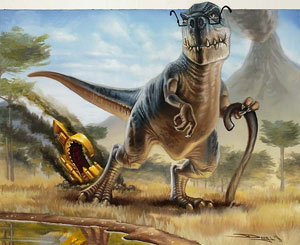 , I am a fuddy-duddy. When people come around with their cool Magic variants, I just shake my head.

"What about some Two-Headed Giant?" they ask.

"How about some 'attack left' multiplayer?"

"Do you want to do anything interesting at all?" they ask in startled disbelief.

"Nah," I say, and return to the format I love best.

But it's not fair; you poor readers shouldn't be held hostage to my stodgy habits. Many folks get off on the idea of bizarre Magic variants where the rules are changed to make life more interesting... and if you've been following my casual writings here at magicthegathering.com, you may not know about some of the best of them simply because I haven't mentioned them.

Well, it's time to rectify that. Here are some of the cooler Magic variants. Some of these, like Elder Dragon Highlander, are Constructed formats, where you have to bring a specially made deck... but others can be thrown together on the spur of the moment, or even just plopped down into the middle of your normal Magic game.

So here are some of my hand-picked variants to spice up your multiplayer group. Each of these are thoroughly Ferrett-approved.

Even if I am a stick-in-the-mud. 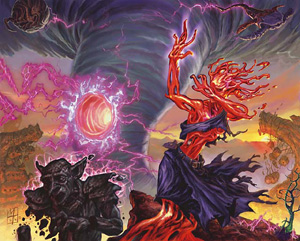 If you delight in creating long-term plans and then carrying them out... Well, this format's not for you.

The rules of this format are pretty simple: Get a stack of various enchantments, instants, and sorceries that you think would make the game more interesting if they happened. This is called the Chaos Deck. Shuffle them up, and put them in a big ol' pile in the middle of the table.

Then, at the beginning of every player's upkeep, they roll a six-sided die. If that die comes up six, the top card of the Chaos Deck is flipped over—and you may not respond to its effect, since it does not use the stack—and the card then "comes into play." If it's a sorcery or an instant, it fires once and only once. If it's an enchantment or artifact, it affects everyone until it goes away.

The trick is, naturally, making a good Chaos deck. Cards like Wrath of God do the job, but they're not particularly interesting. Better to use something like Fecundity, which makes it more fun for everybody.

Also, to avoid rules issues, you'll usually want to pick cards that don't involve player interaction and do involve everyone. While it seems fun to have, say, a Goblin Bombardment into play, the obvious question is whether anyone can sacrifice a critter to do a point of damage. If it's just one guy, well, the luck factor starts to get obscene if he flips over something good and just wins. And if it's everyone, then people get confused because that's not what Goblin Bombardment says.

(Alternatively, you can try to engineer it so that any effect that says "you" means "any player," but that still gets messy. Better to stay away from it altogether.)

(Okay, I said no creatures. But Karona, False God is such fun in this stack....)

There are a lot of variants on this, of course. Some folks allow you to respond to a new Chaos Card coming into play. Others allow you to counter, Disenchant, or destroy it. And still others have even better stacks than this.

Regardless, it's a lot of fun. You have to be willing to ride with the punches, since your certain victory can be wiped away in an instant by the wrong card, and players who were once far behind will suddenly be boosted into the winner's seat. If you hate random effects, I wouldn't suggest it.

But c'mon. It's called Chaos Magic. What did you expect?

The interesting thing in casual Magic is that Constructed formats wax and wane for mysterious reasons. At one point, 5-Color seemed to be everywhere you looked—and then, almost as suddenly as it had arrived, it faded away. It's still around, of course—no Magic variant truly dies—but it's not nearly as popular as it once was.

The rise of Elder Dragon Highlander, however, is no surprise. It has an ambassador in the form of Level 5 Judge Sheldon Menery, who has gone to great lengths to export it to every Pro Tour and Grand Prix he arrives at. (And, as an extra-special bonus for me, it was created by two friends of mine in Anchorage.) 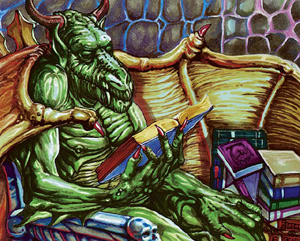 There are a fair number of rules.... but fortunately, EDH is one of the most flavor-heavy Magic variants around. You'll find it pretty intuitive as long as you get that you're in command of a legendary general who's commanding his army.

EDH is played with Vintage-legal cards, with a smattering of officially banned cards; see the official page for the current details. Each group may have its own banned variants, though, and some cards have been "errataed" for EDH play.

(Full disclosure: I have yet to actually play EDH—I know, I know. But so many people have written in to extol the virtues of EDH that I felt it was about time I brought it up here in the hopes of supporting it.) 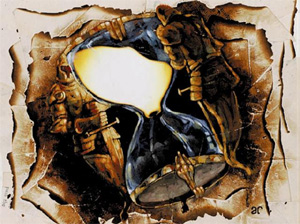 Nobody likes being mana-screwed. So how would you like a game where you start with infinite mana in your deck? That's right; if you've got that spell in hand, you can cast it every time.

Well, that's Type 4 for you, a.k.a. "Limited Infinity." Like Chaos Magic, it involves a stack of cards that you create in advance – but unlike Chaos Magic, everyone drafts from this stack, creating a deck from their best picks. (Also, to prevent abuse, you can only play one spell per turn.)

I'd say more, but Stephen Menendian wrote about it here, and since that's about the best introduction to a format that I've ever read, there's not much more I can add. Type Four always been a hoot the regrettably few times I've played it, and I can't recommend it highly enough.

The only slightly tricky thing is developing a good stack, as Stephen notes. Fortunately, many people have been kind enough to share their advice on creating the most enjoyable and strategic T4 stacks; you can try here and here and here and here. 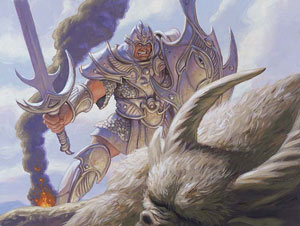 Abe Sargent has been one of the stalwarts of the Casual Magic community, chronicling rare and obscure formats for over two hundred articles now. (Seriously. Check his archives.) But a couple of weeks ago, he came out with what seemed like a truly fun idea: Magic the RPG .

That's right; if you're familiar with Dungeons and Dragons, you'll get the gist of it right away. You choose a name for your "character," and you start with twelve Mage points. You then use your Mage points to give your character "stats" and "skills."

Mental Fortitude represents your memory—a.k.a. "cards in hand." Every Mage point you put into Mental Fortitude allows you to start an additional card. (Most players will probably choose to put seven Mage points into this to start with the traditional seven cards.)

The skills, however, are where the coolness is. Abe has listed a bunch of skills that you can spend Mage points on to use in the game, many of which caused hot debates in the forums about which skills were too powerful or too weak. Since this variant only emerged a few weeks ago, it's not clear what's what yet, so some tweaking will undoubtedly be needed.

But the cool thing is that as you play more games in the format, you grow in power and move up the XP chart—just like D&D. Wouldn't you like to be a fifth-level player? Of course you would.

I think it's a clever variant. I haven't had time to play it, natch, but the sheer number of ways you can change up things seems like it'd be a lot of fun. I encourage you to try it out, since I'd like to see if this neato idea is ready for prime time. 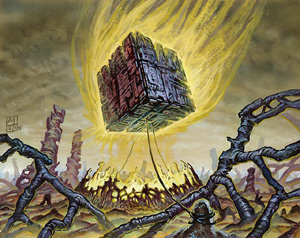 There are a host of awesome formats for you to try, if you'd like – this just skims the surface. There's Cube Draft (which is amazingly fun when you draft a Mox), Peasant Magic, Rainbow Stairwell, Mental Magic, Secret Alliances, and of course Magic Online fan favorites Tribal and Prismatic and Vanguard and Donner and Blitzen. (Click here for the list of official Constructed formats.)

There are a lot of ways to mix up your Magic. Delve deep, if you're so inclined!