elcome to the week before the first Mirrodin Beseiged preview week! Yes, I know the pain of there being no card to ogle and share is daunting. I promise: the awesome is coming.

So what do we do in the meantime? Perhaps a quick draft or two isn't something you're keen on with the latest set just around the corner. Maybe building more decks with Scars of Mirrodin isn't very exciting at the moment. You might even think there isn't any way to fill the time with something that provides nigh endless amusement.

To say that I play a lot of Magic is a fair assessment. But it's how I play that Magic that may surprise you: I almost always play with paper cards. Whether it's a product of my fascination with the smell of freshly opened booster packs, the comfort of using the cards I'd carried by hand for so long, or the dynamic environment of sitting down socially with friends, paper Magic is just how I do it.

But I put the "almost" in there because I'm on an adventure. I want to try more Magic than I have ever before and the biggest piece I'm missing is the digital kind: Magic Online.

There's a lot of ways to get into Magic Online and it's up to you to find the way that works for you. I'll share a few over the coming months but today I have the most hilariously awesome ways to play in the digital age. It's something that despite being popular and hilariously random is almost impossible to replicate outside Magic Online. 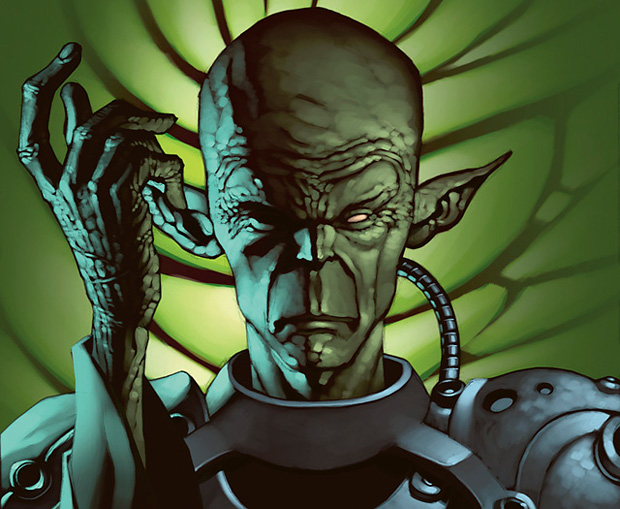 In sum, Momir Vig, Simic Visionary Avatar Basic is a way to play with every creature in Magic without even needing to own any. Just sign up for Magic Online, grab the event deck, and go (in two easy steps):

1. Head to the Casual Play room.

2. Start a Momir Basic under Constructed. 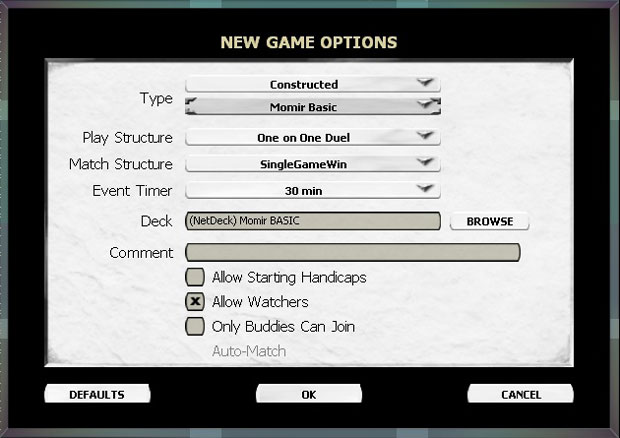 While you get a sense of what Momir Vig, Simic Visionary Avatar Basic is all about from the details above, let's dive into what these games actually feel like.

The player futant was my first opponent and a friendly one at that. I rolled out with a Goblin Legionnaire, Krosan Warchief, and Nagao, Bound by Honor to an opposing force of Fire Ants, Tibor and Lumia, and Shard Phoenix.

When futant was gifted a Storm Spirit, the fan got hit. I popped my Goblin Legionnaire to take out the Fire Ants. Then ... oops. 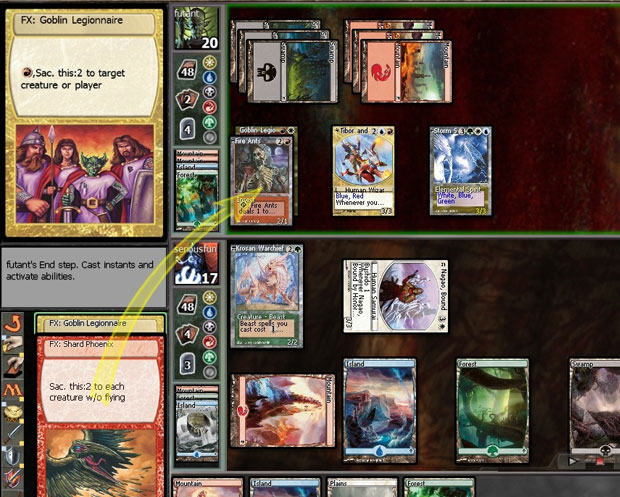 A mistake was made. Of course, my mind didn't process seeing the Shard Phoenix ability on the stack, so ... 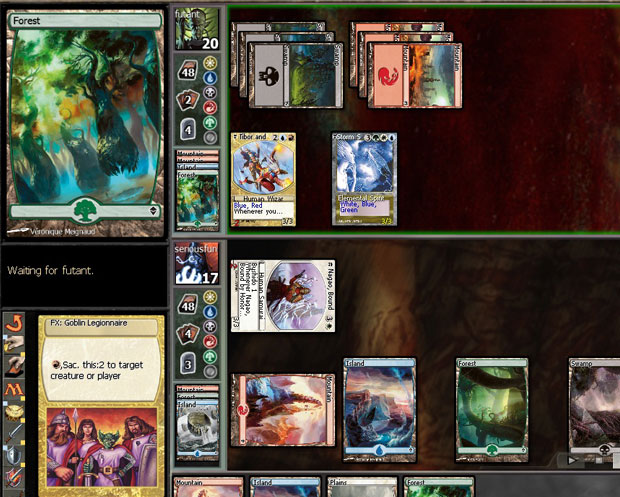 A click later and I missed my chance to activate Krosan Warchief's regeneration ability.

With the boards missing many creatures I was still in a tight spot: Storm Spirit was what felt like a huge creature while I didn't have my own with flying. After I dropped the Anti-Bob (Trained Orgg) I was dismayed to see futant's follow up turn yield the actually huge Devouring Strossus. 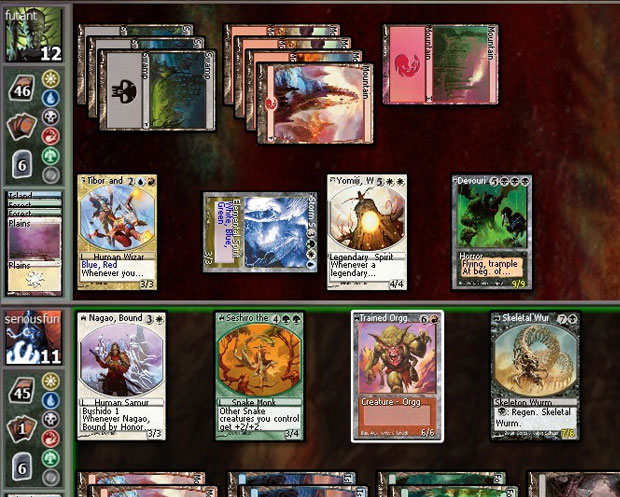 At 11 life, that's game when Skeletal Wurm is what you get to summon. Thanks again, futant!

It wasn't long after that ending that I had jumped into another game, this time with greg_champ84. It started out pretty similarly, a few smaller creatures (Ohran Viper being the scariest by far) starting each other down. 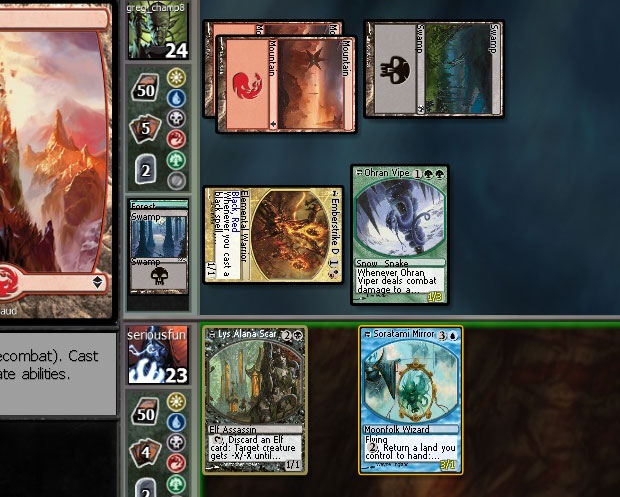 We traded a few creatures but what I wanted was a clean way to trade away for Ohran Viper. What I got was an Exalted Dragon. 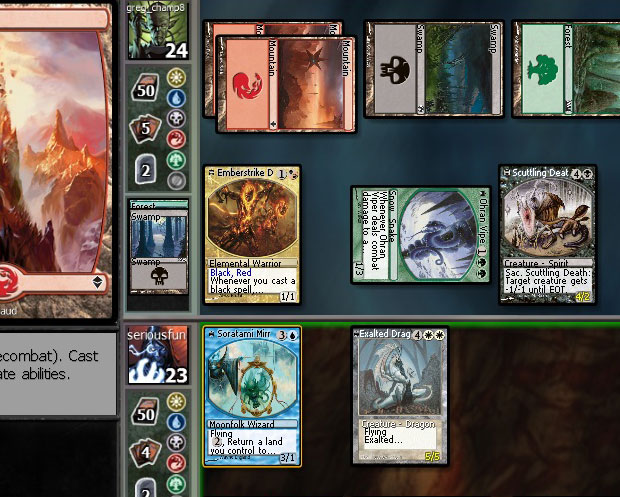 Which, in a frank matter of speaking, is referred to as a "bombo" in Magic. The Dragon met the Viper, which ended the prospect of some card draw, but was supplanted by a Woodcrasher Baloth. My Craw Wurm was a little less sexy gift from the random-machine brain controlling the game. 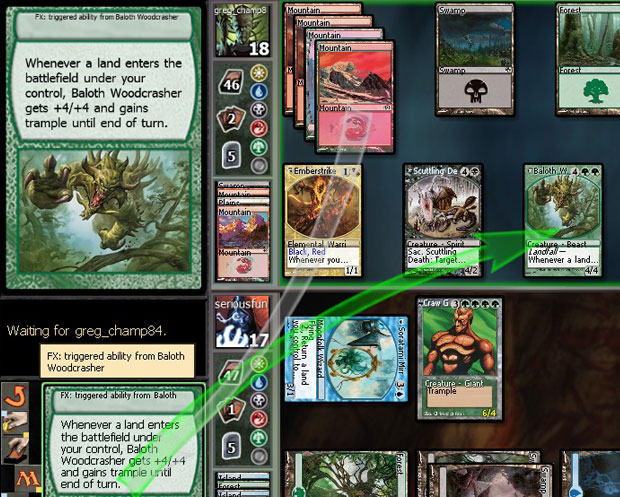 I took a mean hook to the jaw, but I was still standing after trading some creatures away. Unfortunately, Titanic Bulvox promised a swift demise. Giving the creature die an 8-converted-mana-cost chuck I received one of my favorite creatures from the original Mirrodin era: Living Hive. 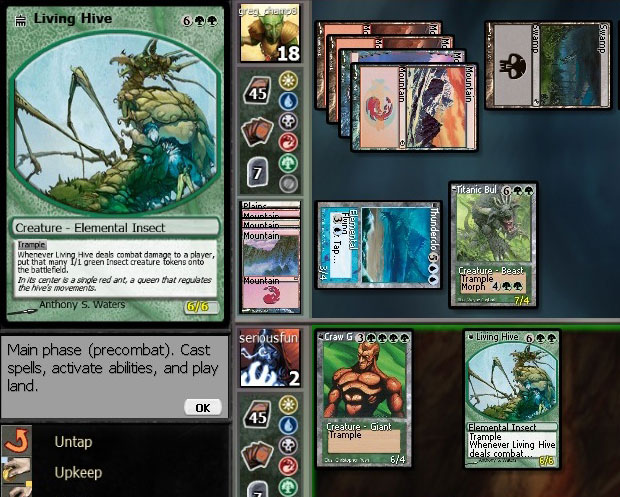 There are worse ways to go than with a trusty companion! Thanks greg_champ84!

I was hoping a little luck would be on my side going into another game, this one paired against Nemeros. Like the other games, we started off at a bit of a stalemate. 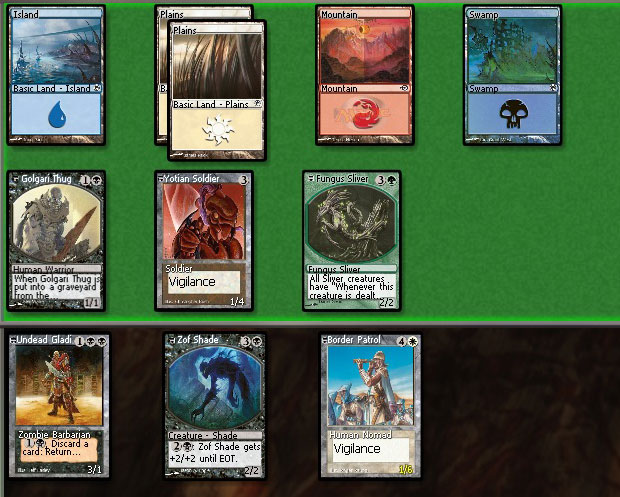 But one of the best parts about Momir Vig, Simic Visionary Avatar is that your luck can change in an instant: a Looming Hoverguard appeared for me and set the balance firmly in my favor. 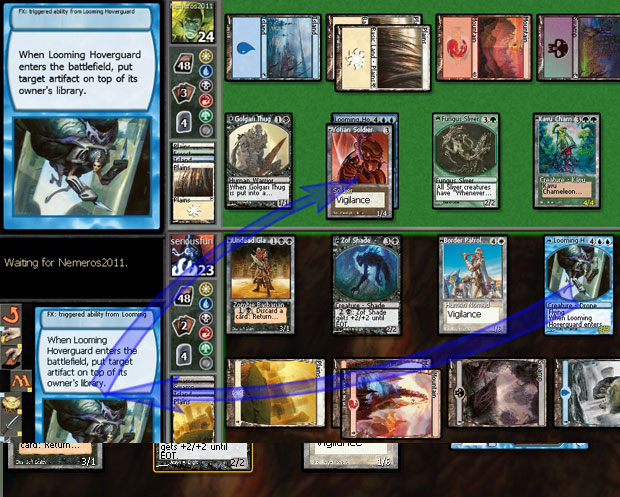 After trading my Siege Wurm for a Craw Wurm, luck decided to look favorably upon Nemeros: Archdemon of Unx. Finally! Something for a truly back-and-forth tussle!

So what happened? Technology. I think.

I slipped in a Silver Seraph and the Archdemon upgraded Golgari Thug from a 1/1 to a 2/2 for Nemeros. But when the Archdemon struck across, and I chose not to block since my creatures would be getting a huge +2/+2 treatment thanks to the Seraph next turn, it looked like Nemeros got disconnected.

When Nemeros was back, the Archdemon finished combat damage. Then, just before I made another eight-mana creature and turned on Silver Seraph's threshold ability, Nemeros gave up the ghost.

I'm not sure why it happened that way but such is the way of things. I guess this counts as a win, right? 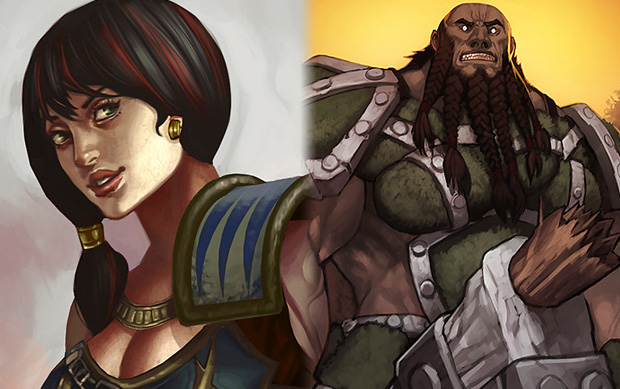 Jhoira of the Ghitu and Stonehewer Giant avatar art

What does this do? Well, for starters it means you create a Freeform Vanguard game with the text of MoJhoSto in there.

Yes, you're reading that right: tons of free Equipment and even more random, varied spells now of types other than creature! Australian native Russell Tassicker recently wrote about this way to play, though he certainly wasn't the first to concoct this creation. If Momir Vig, Simic Visionary Avatar seems tame or boring, MoJhoSto is something on a whole different order of awesome!

I'm sure after I work out some more kinks in using the interface, like not clicking unless I'm 100% sure what's going on, I'll be humming along and slinging some more basic lands. If you've tried Momir Vig, Simic Visionary Avatar, Momir or other great ways to play through Magic Online please share! I'd love to hear how you're making the most of the digital digs.

Join us next week when Mirrodin Besieged shows us why knowing is double the battle.