Modern Masters for the Multiplayer Maven

uch has been said about Modern Masters and what it offers to Modern players and Draft enthusiasts. In fact, by the time you read this, I'll have had a chance to draft a box of Modern Masters with my kitchen-table crew! I'm looking forward to the opportunity, since everyone I've talked to has given Modern Masters good reviews as a set to be drafted.

This is not to say that Modern Masters offers nothing for the casual player! Many of us were playing Magic when these cards were first played. This is an opportunity for us to fill out our collections with cards we missed the first time, or perhaps that fourth copy of a card that just makes your deck hum. For the other newer players, this is a chance to open "New to You!" cards. Many of the cards in Modern Masters are great around the kitchen tables as well! 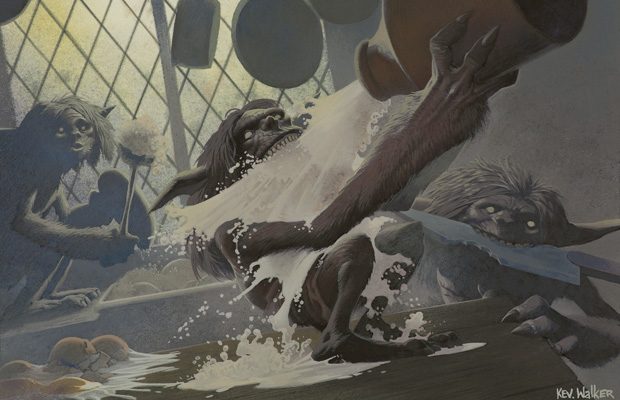 I had initially planned to give you my Top 10 multiplayer cards, but it isn't really appropriate for this set. There are so many solid cards that new players (and old) should be using that aren't better in a multiplayer environment that I would be remiss to ignore them. Instead what I'm offering are three separate Top 5s!

The staples are what I like to refer to as the "toolbox" cards. These are the cards that aren't all that splashy, but they regularly see a place in most decks because they do things that are useful in just about every game. They are the less glamorous, heavy lifters. Acidic Slime and Lightning Bolt are two examples of these "toolbox" cards. Let's get started.

5. Eternal Witness. A key tenant of multiplayer theory involves resource management. So often, the decks that make the best use of their cards win games. Drawing extra cards is one way to gain an edge, while reusing cards is another. Eternal Witness is an all-star when it comes to reusing cards. Most decks that include the Human Shaman have a way to bounce or flicker their Eternal Witnesses to return multiple cards from the graveyard to hand. Players who can recast their spells multiple times win more often than those who don't. Eternal Witness makes that happen and should be part of your casual toolbox.

4. Lightning Helix. Spending two mana for 3 damage at instant speed may not be the gold standard (Lightning Bolt continues to rule the roost in that aspect), but the Helix does offer a 3-life bonus that should not be underestimated. The combination often results in an opponent losing a creature and your life total climbing out of the danger zone. It is a rare deck that plays red and white and shouldn't include this card.

3. Maelstrom Pulse. My metagame has been lousy with token decks for quite a while now. In fact, I'm one of the prime culprits. The good folks at Wizards have seen fit to give us plenty of cards that produce masses of tokens that can often overrun a table in a hurry. This, coupled with the overwhelming desire of most players to constantly put four-ofs in every sixty-card concoction they build, make the Pulse a valuable addition to your deck. You will want to be aware of your metagame if you intend to use the Pulse in your Commander games, but even when it only takes out a single permanent, it is practically unconditional permanent destruction!

2. Krosan Grip. I always felt that enchantments and artifacts with activated abilities were somehow unfair. If I used a Disenchant to try to get rid of my opponent's Pestilence, the dreaded phrase, "in response" would ring out and my opponent would activate it, killing my creature. This was exactly what I didn't want to happen. It seemed somehow wrong that I had an answer, but I still lost out. Krosan Grip and split second brought an end to all of that. You no longer had to live in dread of the Pernicious Deed that sits on the battlefield, staring at you, daring you to play another permanent. If you are running Naturalize in a deck, switch to Krosan Grip. The one extra mana is practically no downside at all compared to the upside.

1. Path to Exile. One mana to exile a creature. No restrictions. Since you are not playing this in the first few turns (you are waiting for a Primordial or other truly nasty creature, right?) when an extra mana means something, it is hardly an issue at all. An excellent addition to any toolbox.

This doesn't really need a description. Each of us will have something different. This is a straight-up opinion Top 5. I've had fun playing with or against each of these cards and I'm excited they are back in regular circulation again.

5. Meloku the Clouded Mirror. Most people are not fans of Meloku because he requires you to jump through many hoops to get a benefit. I love it because he stays under the radar and can get work done over several turns. I built a landfall deck that used Meloku and other Moonfolk who returned lands to my hand, so I could run them out again.

The deck was never an amazing all-star, but when Roil Elemental was going, the board state certainly became interesting!

4. Knight of the Reliquary. I am a land junkie. When you offer me a creature that tutors for any land out of my deck, I will be a happy guy. I have searched for Maze of Ith, the next Locus, and all sorts of dual lands. My personal favorite was searching for The Tabernacle at Pendrell Vale. There was much wailing and gnashing of teeth over the loss of so many fine creatures.

3. Sword of Light and Shadow. Remember in the Staples section above where I talked about Eternal Witness, Lightning Helix, and Path to Exile? This sword offers recursion, repeatable lifegain, and protection from players using white or black to get rid of creatures! This sword has been a real nightmare for me and I'm looking forward to picking this up and sharing those nightmares with my opponents in the near future.

2. Adarkar Valkyrie. The Valkyrie is white's way to get into the recursion game. You can attack regularly, yet with vigilance, she is always ready to block or tap and scoop the freshly deceased out of their not-so-permanent slumbers. The ability to take the creatures out of your opponent's graveyards is something that should not be underestimated in multiplayer games. Often, your opponents will have just the creature you're looking for. I have even used it simply as a way to keep the card out of their graveyard to prevent more recursion shenanigans.[1]

1. Doubling Season. These have been the unattainable Nirvana for me. Doubling Season is a card that screams casual fun, yet very few people I know own one. They have been hard to find since so many people love to double up on counters. Parallel Lives is nice and Vorel of the Hull Clade is good, too, but no other card is as all-encompassing as Doubling Season. Being in Modern Masters means I expect to see these coming to my kitchen table games soon.

5. Grand Arbiter Augustin IV. This appears to be a great multiplayer card. My spells are cheaper, and your spells cost more. And it hits all of your opponents, so it works well in multiplayer games, right? While this looks great, players really hate to pay more for their spells. They hate forgetting about him, then being reminded, "Did you pay the extra for that?" Players hate paying extra for a spell, even when they have the extra mana! Expect to become an enemy to all. Do not play the Grand One until your defenses are set and ready, for they will come.

4. Blood Moon. As a land junkie, perhaps I hold an unnatural hatred of this card, but I don't think so. Multiplayer games regularly have upwards of twenty nonbasic lands in play. Blood Moon can shut down some players completely and dramatically limit others. Many of us who have been playing for a long time tend to have fancy mana bases loaded with nonbasic lands that provide multiple colors of mana or other, more exotic benefits. Blood Moon becomes a great equalizer. I'd warn you in the same style as I did for the Grand Arbiter, but a Blood Moon in the right metagame leaves players helpless.

3. Sword of Fire and Ice. This is obviously a great card in pretty much every format. Protection from red and blue stops so many targeted spells and abilities, whether you are playing Limited, Standard, or Casual. Why does it get a nod in multiplayer? You can do the combat damage to any opponent, then do the damage to another opponent or another opponent's creature. Hitting an open opponent and taking out an annoying utility creature that another player controls that you can't seem to get rid of otherwise makes the Sword a little better in multiplayer.

2. Feudkiller's Verdict. I love this card in multiplayer, since it is rare that gaining 10 life doesn't give you more life than at least one of your opponents. This means that six mana is giving you 10 life and a 5/5 creature. I'll happily take that! This doesn't even include the benefits from running a tribal sorcery. So many people seem to think the only card that benefited from these was Tarmogoyf, but it just isn't the case. Consider Giant Harbinger. He can search for the Feudkiller's Verdict. Even better is Stinkdrinker Daredevil, who makes the Feudkiller's Verdict cost only four. While these are benefits only available in a specific deck, it does show the upside of the Verdict goes beyond what is written on the card.

1. Gifts Ungiven. When this card is played in one-on-one games, the caster is trying to work out a way to get a benefit, no matter which two cards are put into the graveyard. In multiplayer, the real trick for this card is to target the correct opponent! If I'm working with someone to take down a more powerful opponent, quite often I can get the "opponent" that I'm working with to give me the exact cards I want. I've used this card, and Fact or Fiction, this way several times. When you can take the limitations on this type of card and just throw them away, getting the exact cards you want from your library quickly become broken.

I hope each Top 5 offered you something interesting, something exciting, and something surprising. If I can give you something you hadn't considered before, then I'll consider this a success! I hope you find whatever cards you're looking for in Modern Masters!

[1]And I love the art. Somehow it feels distinctly different from the current art, and even the art from Coldsnap. [Return]