his week, there are three fairly separate things I want to talk about. If only there was something that could tie all three things together...

The Case for Monstrosity

I'm not a monstrosity fan.

I am a fan of creating a monstrosity with a creature—adding Auras and Equipment, hexproofing or protectioning your little fellah from problematic colors until your cute little creature is a nasty, slavering monstrosity. 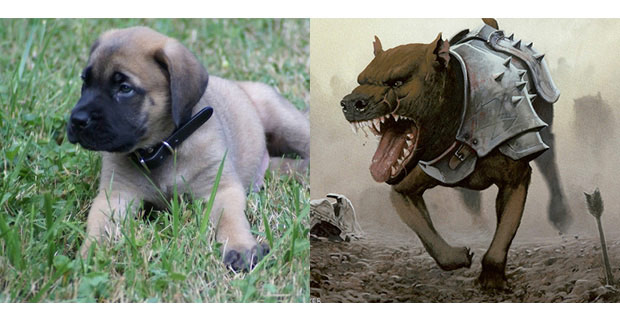 Monstrosity is an okay way to start that process, but it just costs so much. I understand why the cost is as high as it is. A creature with monstrosity starts with a lower casting cost, so it can see play earlier, adding to the card's usefulness. Then you get an ability that involves a permanent size increase, and quite often some other benefit. Most importantly, you get that benefit without having to use another card. Getting a benefit without using up a card is significant, and for that, you have to pay a harsh penalty.

I have been mulling over the possibility of a Gorgon deck. Monstrosity Week is just the impetus I needed to put it together, considering two of the major players in the deck both have monstrosity.

1 Coils of the Medusa

3 Reaper of the Wilds


Even before I started, I knew the mana curve1 was going to be an issue. Gorgons generally cost between five and six mana. This deck has those gorgons and the Sisters of Stone Death coming in at eight mana. Thankfully, the Reaper of the Wilds only costs four, so there is some saving grace. I also knew including Hythonia the Cruel and Keepsake Gorgon would mean that I'd want to be able to monstrosity them, so again, mana would be an issue. I knew I would be looking to break from theme, at least for the smaller creatures, or overload the deck with mana fixing.

Instead, I opted to cheat and go tacky with Changelings. For those of you not playing during Lorwyn block, shapeshifters had the changeling ability, which meant they were every creature type. This allowed you to use them to fill in spaces in various creature-theme decks when that creature type wasn't as popular as Goblin or Merfolk. I run a handful of Changelings in my Allies deck. I opted to run a few here as well.

The Changelings in this deck are there solely to stop you from taking a ton of early damage. Not putting out a creature until you have five mana is generally the kiss of death in my group, and I believe that is true in many of your playgroups as well. I chose Moonglove and Skeletal Changelings because they are solid defensive creatures. Most players will have no interest in trading their decent creatures for a puny Changeling, so you should be just fine.

With the high cost of Gorgons, and the monstrosity costs as well, I opted for some mana ramping as well. Four Harrow and four Sakura-Tribe Elders seemed to fit the bill quite well. The Elders can act as more blocking fodder, then still get you a land. The Harrows are instant speed and put the land into play untapped.

Belbe's Portal is a further nod to the cost. Getting a six-mana Gorgon for three mana at instant speed is a wonderful thing. Even when you have the mana to cast it, using the Portal is generally the better plan. Leaving mana up for something else (even when there is nothing else) is a solid play.

Once the mana count is up, the fun can begin. Gaze of Granite clears away all the little guys, including the masses of token creatures that can flood so many games. Visara the Dreadful and Keepsake Gorgon (with monstrosity!) can kill creatures on command, letting Reaper of the Wilds scry into your library for more goodies. If Hythonia the Cruel gets monstrous, the game should be over quickly. A handful of gorgons, with no creatures left to block them, should be able to pile up the damage fast enough to make short work of the game. I'm not sure if Vraska the Unseen or Coils of Medusa belong in the deck, but for now, the flavor is just too good to pass up!

As most of you know by now, I'm a little bit crazy. Combine that with All Hallow's Eve and I decided to try something a little different. 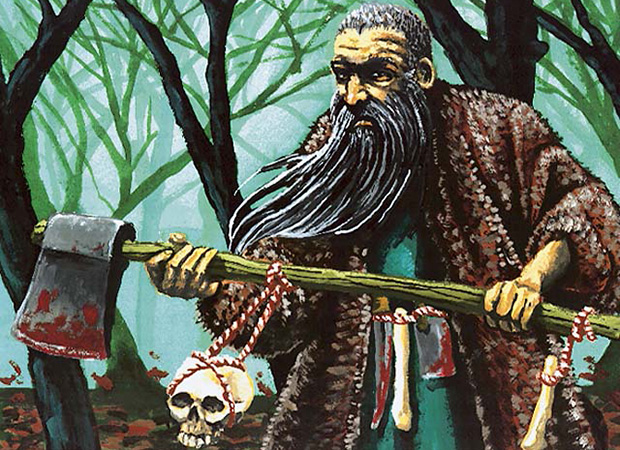 For those of you who don't recognize this monstrous fellow, say hello to your Uncle Istvan. Your Uncle is a bit of a loner, and a whole lot of insane. I expect the crazy look in his eyes gave that away, but the skulls and bones hanging off his axe and belt really do cinch it. I used to play with this guy on a fairly regular basis. He was never much of an attacker, but my opponents generally avoided me when he was in play. Who wanted to waste a burn spell getting rid of a 1/3 creature?

Nowadays, Uncle Istvan is outclassed by many other creatures. Perhaps he'll work in a black devotion deck, but he generally prefers to spend most of his time alone as a park ranger. Istvan likes the quiet lifestyle that being a park ranger offers. It isn't like there are a lot of people requiring his services lately. Unless someone were to decide that Uncle Istvan would make a great costume for Halloween. 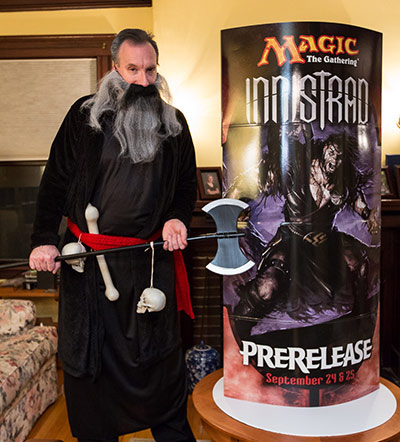 The joy of Uncle Istvan is that anyone with a robe, axe, Duck Dynasty-style beard, and a few skulls lying around can pull it off. The children who rang our doorbell mostly just raised their eyebrows slightly, but one small child did drop his jaw. When a six foot four guy, all in black and bones, opens the door holding an axe, a dropped jaw is probably the appropriate response.

The particularly sharp-eyed among you likely noticed Garruk on the Innistrad poster next to me in the picture. This wasn't just me showing off my swag on Halloween. My friends and I regularly play Magic on Thursdays, and we weren't going to give that up just because millions of children would be running around neighborhoods throughout North America (is Halloween celebrated elsewhere in the same way?) stop us from playing Magic. Usually, on the last Thursday of every month, we step away from our Constructed multiplayer games and try a Limited format. I happened to have a sealed box of Innistrad sitting in my basement.

Unfortunately, we ended up with an unseasonably small group, as just four of us were available to draft. 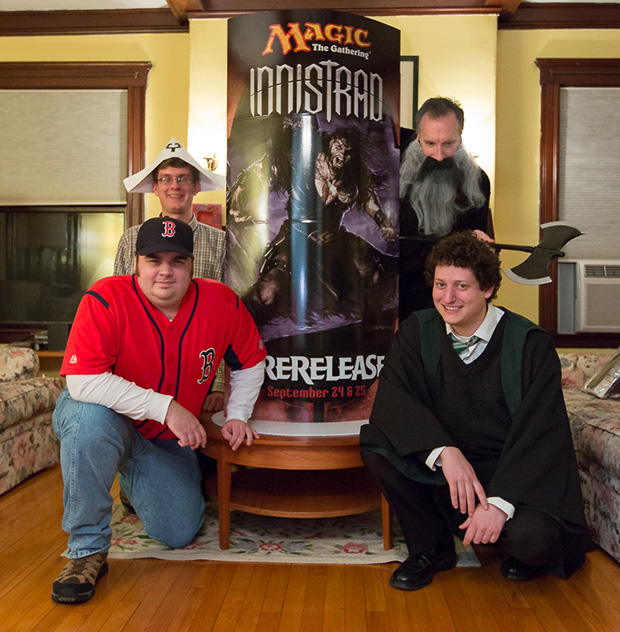 Kevin opted for the minimalist approach, coming as Mikaeus, the Lunarch. Josh was a recent World Series Champion Red Sox player. Jesse's almost unhealthy obsession with Harry Potter has led him to put together an amazing Slytherin costume. Apparently, I'm not the only one in the group who takes advantage of opportunities to add a little more fun to a Magic night!

We started the night with some candlelit Magic. Aaron Shi, Magic player by night and amazing photographer on the weekends, caught the feeling perfectly. 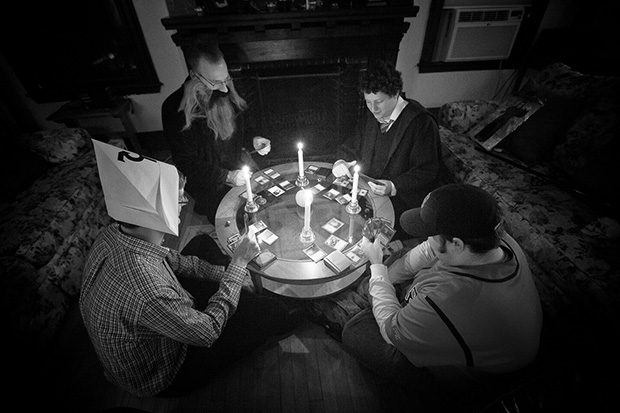 I wish I could say Griselbrand was summoned, but no such luck.

We decided to do a four-booster draft to up the power level of our decks a bit. For the night, I referred to it as "The Monster Draft." It certainly was a graveyard smash! No one hit any of the set's bombs, so it was up to each of us to build a balanced deck that could win based on the overall strength of the deck. I opted for a RW build loaded with fliers. It seemed like a powerhouse when I was putting it together. Many cheap creatures with evasion, coupled with some decent removal. The curve was beautiful and I had high hopes for the deck.

My first opponent was Jesse. The cards came just as I hoped they would. One flier after another and eventually I took him down. I was a little concerned that I had played only one Mountain, but with all the white creatures I was drawing, it really didn't matter. The second game was more of the same. I followed up a second win on the table with an axe to the chest. 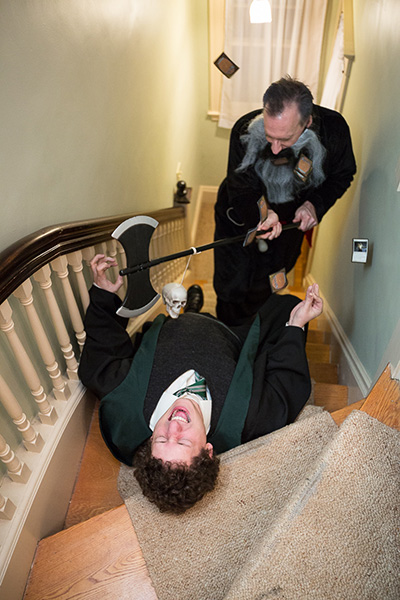 (The pain you see on Jesse's face is real. The stairs were absolutely killing his back.)

My second match against Josh did not go nearly as well. It became clear that my red cards were nowhere near as good as the white that I had drafted. In spite of some removal and a couple of red creatures, I was always hoping I would just draw another white flier. I lost in two fairly quick games to Josh's bounce and recursion.

The third round was a blur, as Kevin's deck curved out beautifully in both games while mine did very little. I probably should have tried drafting more blue, but drafting a set twice won't make anyone an expert. After this crushing defeat to Kevin, I opted to exact my revenge against the Red Sox for his earlier misdeeds. 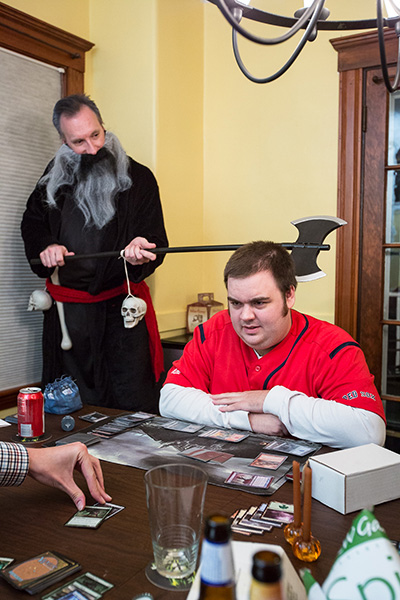 Alas, they had already won the World Series, and the bludgeoning from my axe paled in comparison to what his deck was doing to everyone else.

While the turnout wasn't as big as I had hoped, we all had a great time playing Magic and posing for various pictures. I hope each of you managed to add some Magic to your Halloween festivities!

1: Mana curve is a Magic term used when looking at the mana cost of the cards in a deck. While there is a lot of room for variation, most decks have several cards costing two, three, and four mana, with a few cards costing less and a few costing more. There is a lot more to the theory than that, but for this article, that should suffice. (return)