or me, inspiration comes from everywhere. One of my readers, Travis, provided me with some inspiration for a deck combining Sands of Time and Strionic Resonator to create a situation where you can tap and untap your creatures, lands, and artifacts as often as you want during your upkeep. By itself, this is a little ridiculous, but add in various inspired creatures and things can get outright silly. Oreskos Sun Guide can give you all the life you want. The Servant of Tymaret forces everyone to lose due to loss of life. Siren of the Silent Song mills all of the opponents out of the game. I even put together a decklist for those of you whose playgroups get a kick out of unusual combinations of cards that just end games.

4 Siren of the Silent Song 4 Servant of Tymaret

While I appreciate the inspiration I get from my readers (keep it coming!), I want to take a little more holistic view of Inspired Week here at DailyMTG.com and talk about what inspires me. Actually, it is probably just easier to show you what inspires me. 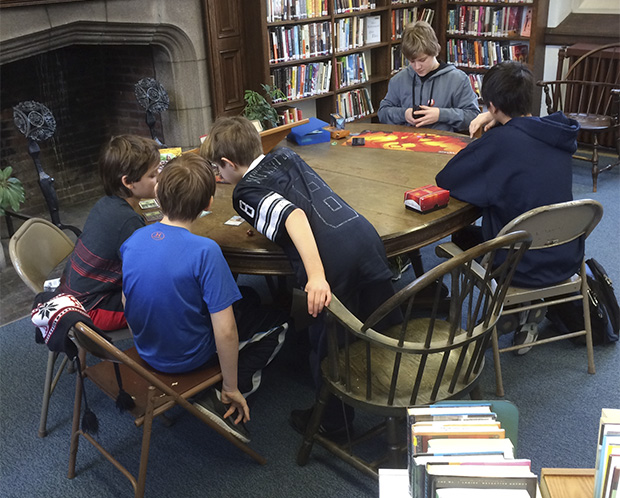 These are some of the young players who were at my Born of the Gods Prerelease. When your Prerelease is as small as mine is, there are no table numbers. I simply call out the pairings and the boys find table space in the library to play out their matches. Here, we see one of the players explaining how the inspired creatures worked to the two players actually playing the game. While I encourage them to call a judge, I also encourage resourcefulness. By the time they were done, everyone understood how it was supposed to work. Their resourcefulness inspired me. 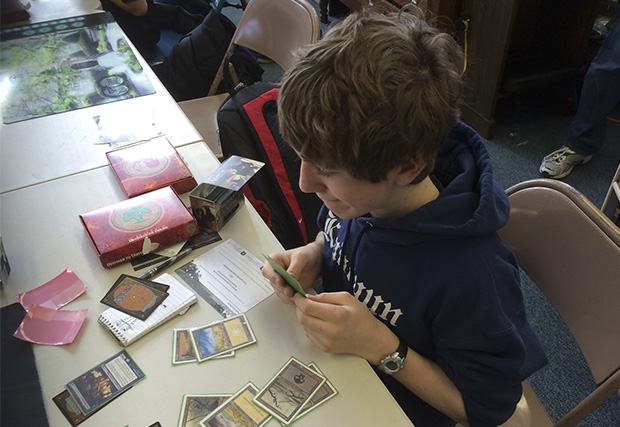 More than twenty players between eight and fifteen years of age played in my Born of the Gods Prerelease. I held it, once again, at our local library. It is always a tight fit, but these guys play for the fun of it.

I wanted to bring something extra to this Prerelease, so I added a team aspect to the tournament. After everyone had picked his color for the tournament, I told the players that the team with the most points, weighted to make it fair for smaller teams, would win a pack of Avacyn Restored for each player on the team. I haven't seen players so excited over a single pack of cards! As games ended I called out new team leads. Players gathered around the remaining games, watching to see if their teams could pick up more points.

Willie was one of only two players who chose white. He and Bennett both won their first round and were the leading team after the first round. They stayed close to the lead through each round and were always checking with each other to see how things were going. The unabashed support of teammates was inspiring. 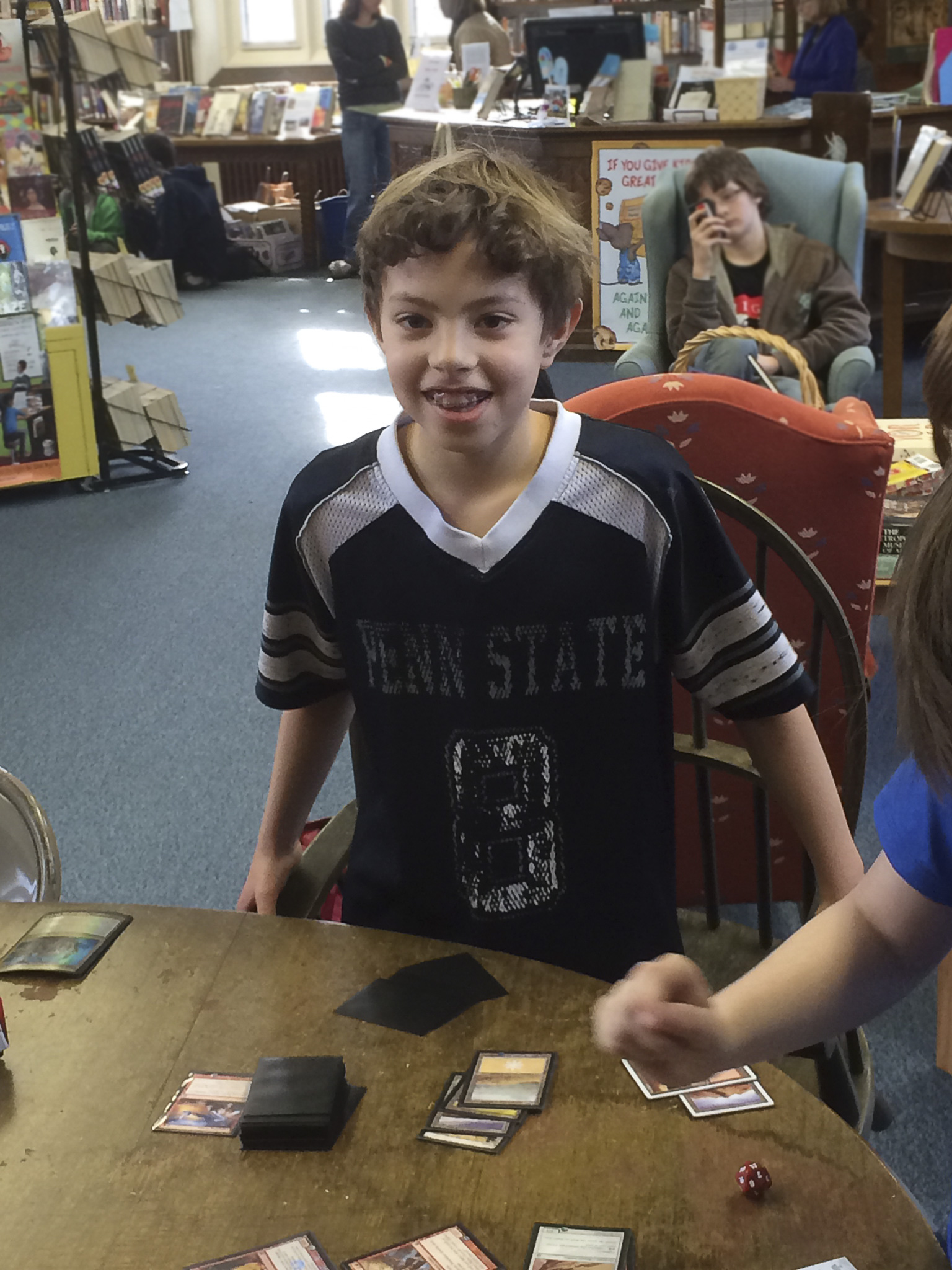 This is Rhylan. It was his first Prerelease and first experience building a sealed deck. He stepped in without fear and played well through all four rounds. While it may not seem like much to others who have done it so often, his courage to try something new inspired me. 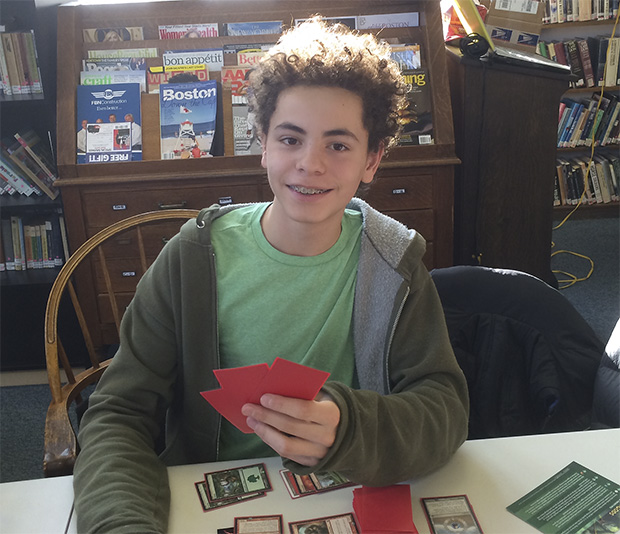 Caden is Rhylan's older brother. It can be a pain bringing your younger brother to an event that was exclusively yours, but he did it, and everything else at the tournament, with a smile. Caden is a joy to play against and is the kind of opponent who leaves you smiling after the round is over, whether you won or lost. Caden understands the fun in the game and brings that fun to everyone. Caden inspires me. 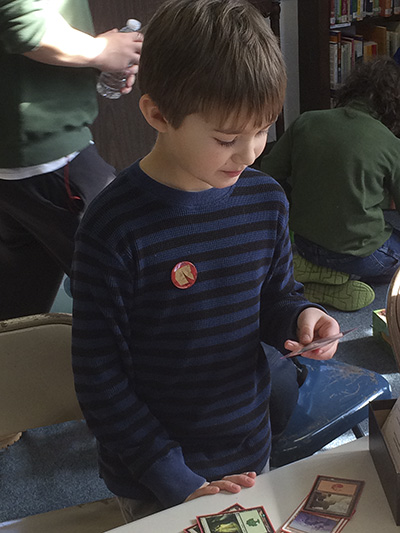 Sean has struggled in his Prerelease experiences. This time around he had a great deck, and his solid play gave him a 2–0 start. He ended 3–1 and was ecstatic to get his prize packs. Sean loves the game and enjoys the interactions. It makes me smile just watching him play for all the excitement he has playing the game. No one was more thrilled to complete his Born of the Gods card than Sean. You can see him wearing his pin with pride. His exuberance over every part of the game is infectious. Sean inspires me. 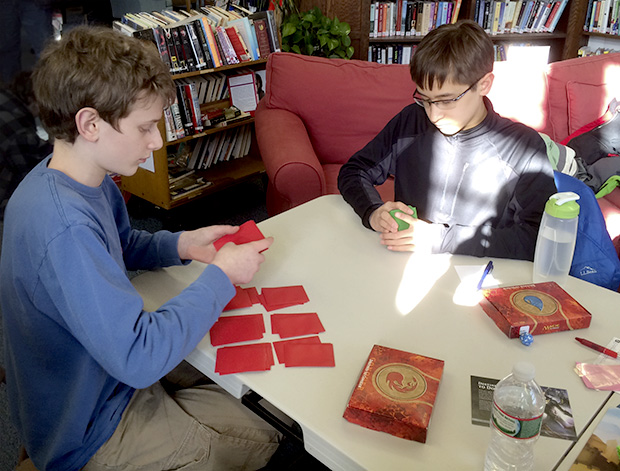 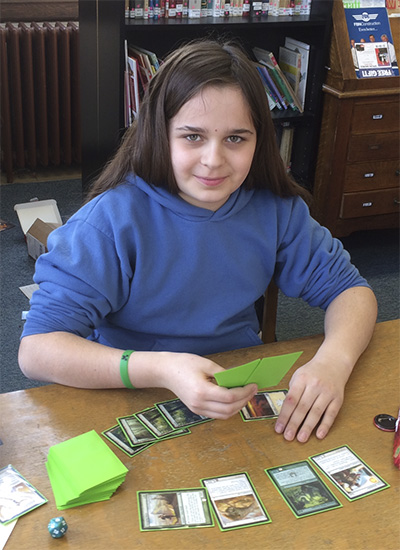 Asa has been coming to these Prereleases for years. This time around, he proved to be an end boss, going 4–0. This was a long time coming. He was one of the younger players who was very quiet and watched everything. He is now one of the outspoken players who understands what is expected of him and what he can expect from me. He has matured in both his play skill and as a member of our Magic community. His perseverance and maturity inspire me. 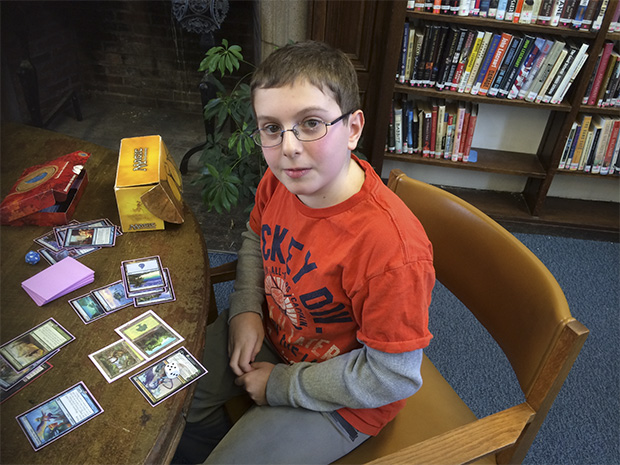 Sam gives you that innocent look and you drop your defenses, but take a closer look. He chose blue. He has Kiora on the battlefield with five counters and two creatures in play that are ready to wipe out his opponent. Sam knows the value of the subtle play over bluster and bombast. Sam inspires me to do the same in my multiplayer games! 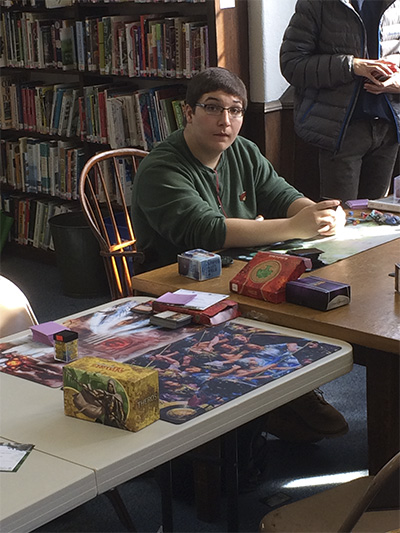 More than anything, Griffin was inspiring. Griffin started the Magic Club years ago and it has grown into this. He is the most talented player in the group; I don't remember the last time he went worse than 3–1 at one of my Prereleases, and 4–0 is the norm. I asked him if he would help me run the Prerelease this time around and he jumped at the chance. He helped set up tables and chairs, and picked up garbage. He cleared up some rules questions from the players. He picked up lunch for the both of us, passed out door prizes, and just did anything I asked him to do.

Griffin could have easily turned me down. The Prerelease is usually an opportunity for him to play with friends and get a first look at the cards, all while winning some prize packs. Instead, he gave that up to make sure everyone else would have a good time. I fully expected that he would play in a Prerelease on Sunday, since I know that he normally tries to get to a Prerelease on both days of a Prerelease weekend. I learned during the Prerelease that he would not be able to play at another Prerelease the next day due to family commitments. He agreed to miss this Prerelease, knowing that he wouldn't get a chance to play in another one. This was the first Prerelease he did not play in for more than five years. Griffin's completely unselfish act was inspiring. 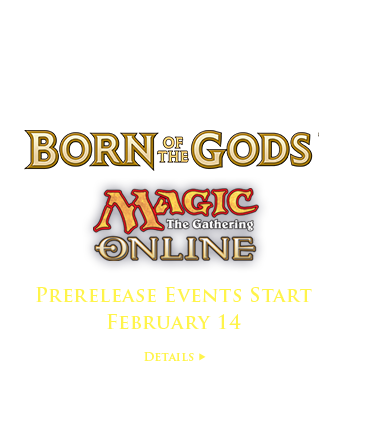