elieve it or not, I didn't grow up on comic books. While I have a healthy appreciation for the fantastic adventures, and soap opera level dramatic plotting of our favorite spandex-clad heroes (and villains), the "comic book superhero" is something that I've grown to enjoy more as I've aged.

Perhaps it's the medium and presentation, the segmented storylines built specifically for anticipation, or even maybe the shared sense of camaraderie with everyone else that is into hero-of-the-week. The one I do know for certain is that I really love the outrageous powers and natural-law defying abilities ever-present in such stories.

And I've spent way too much time imaging myself having the power to do all sorts of ridiculous things. Maybe I need to move closer to a nuclear facility and hope for a radioactive mosquito or something.

But since it's Darksteel Week here you might be asking yourself "What does any of this have to do with darksteel?" The darksteel we refer to debuted in the aptly named Darksteel set and was one of the most surprising things ever seen on a Magic card.

At the time it was revealed, something made of darksteel simply could not be broken. It was the heroic protagonist clad in tights that rose above everything else. The idea that something was just outright indestructible was crazy. There weren't a plethora of effects doling out -1/-1 counters onto creatures and effects that exiled artifacts were minimal.

Having something made of darksteel indicated that you meant business.

While today, however, in the world of Scars of Mirrodin, darksteel—and its namesake of indestructibility—is no longer the cat's meow. Infect and cards like Revoke Existence are natural foils to what makes darksteel so daunting. Everything gets its time in the sun for a little while, including villains.

Of course this doesn't mean darksteel is done dominating tables and decks. While I'm always a happy man to have some big creatures on the battlefield and combat damage to assign, there are occasions I like to unleash some "tricky" things.

Last week, Mark Rosewater continued his adventure through cards in Scars of Mirrodin. In particular he called out Liquimetal Coating as a mistake because it lets rules be broken: casting Shatter on an enchantment made into an artifact is kinda weird.

But what if we flipped the dynamic? Instead of using Liquimetal Coating to create weakness what if we used it to forge a new strength? Enter Darksteel Forge. 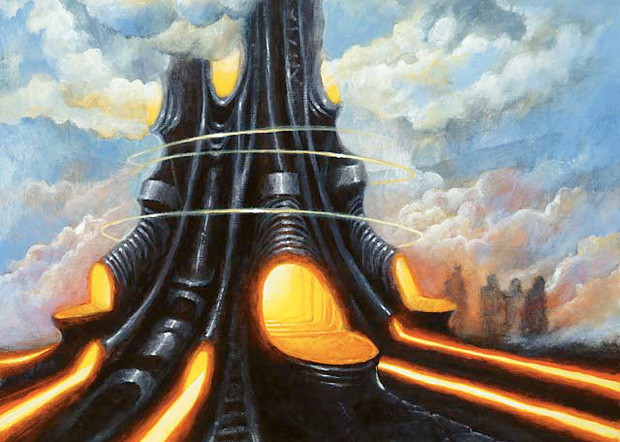 The Forge is something I've seen tossed into nearly every artifact-heavy deck (like my Karn, Silver GolemCommander deck) and generally feels pretty uninteresting.

The stutter-step of an opponent going "Wait, what? I can't stop your stuff anymore? Alright ... " isn't something I generally want.

But what if the Forge's indestructible-granting ability was a switch, something that can be on or off? Paired with Liquimetal Coating it becomes just that.

I Wanna Be A Hero

There are a lot of ways to take advantage of Darksteel Forge and Liquimetal Coating together. I chose to build a funky mix of your usual artifact associates, like Trinket Mage and Fabricate, with a few more interesting picks, like Covetous Dragon and Phantom Warrior. The concoction is something a bit bubbly but something that I'm sure will settle down with some changes from playing it out.

Trinket Mage has a usual assortment of trinkets to find, like the combo-enabling Voltaic Key and mana-pumping Everflowing Chalice, but the addition of Bonesplitter here will help ensure the attack steps of your games will be more intense. Covetous Dragon is an obvious addition for decks packed out with artifacts, but almost any reasonable Dragon, like Hoarding Dragon, will do. I'm just a sucker for themes and Covetous Dragon was the first, and only, rare I opened from a pack of Urza's Destiny.

The real tricks start to stack up with Darksteel Forge and Liquimetal Coating out. Starstorm will let you wipe away creature troubles while letting you pick a creature or three to rescue from the onslaught. Phantom Warrior becomes an extremely sturdy attacker (especially when partnered with a Trinket Mage's Bonesplitter), which Mulldrifter or Augury Owl can also serve as in a pinch as well.

Indestructible blockers may not fare well on Mirrodin currently, but on the battlefields of most games they will certainly hold the fort for you. If you can't attack you can just shield yourself behind your own league of heroes who share their strength from one source: a battery of indestructibility you can tap into for them.

But slick interactions isn't all darksteel is good for. It makes a great blade (Darksteel Axe), guardian sentry (Darksteel Sentinel), or even a place to make war from (Darksteel Garrison). It slices! It surprises! It does it all!

It can even contain an unbelievable reactor.

The Tide of Darksteel

Darksteel Reactor is one of the cards I see pop up from time to time. Someone will "discover" it for the first time and decide, "Hey, I'm going to use this." Usually, it's paired with Dismantle and lots of artifacts that get charge or +1/+1 counters.

However I'm not a fan of the Dismantle approach. While I normally don't mind creating decks that blow up their own world, like with my Kresh the BloodbraidedCommander deck, I usually like my artifacts to stick around. If I didn't like them I wouldn't use them!

This take here is a little rough around the edges but does a lot of things I like. Let's start with the Darksteel Reactor and how we are getting to twenty counters:

While all of these small ways will add up there is the classic problem that befalls many a mad scientist: while we're working deep in the lab our castle is stormed and we're struck down before our plan completes.

Since we're set on the Reactor powering up all the way I decided to go old(er) school with another combo: Proclamation of Rebirth and Kami of False Hope. I remembered this breaking out when Dissension was new.

That pairing would be able to keep creatures from hitting quite as often, and Spore Frog looks to provide more ways to ensure the protection is there, ensuring that combat damage will be pretty tough to push through. Fog Bank and Wall of Omens serve similar purposes in being roadblocks for opposing critters when the shields are down. And finally, Soul Net is an oldie-but-goodie that would let any recycling of our Fogs-on-a-stick gain us a little life along the way.

Or maybe I just like Soul Net too much.

Those two decks are just the sorts of things that are possible when working with the toughest material in the multiverse. And fortunately there are a few more ways to stretch the unbreakable a little further.

It's also not the most original of ideas—to say it's been hashed before is to insult chopped potatoes and corned beef—but one that's always hilariously random to bring out from time to time. Take one part March of the Machines and mix thoroughly with lots of non-creature artifacts, especially those forged from darksteel, and stir well. Voila! You have an instant and mostly indestructible army.

Darksteel Forge and Master of Etherium are often co-conspirators in these decks. Trigon of Thought is a new card to try since it will draw a few cards for you then become a 5/5 combatant. Nice.

Darksteel Ingot isn't a piece of combo machinery. It isn't particularly exciting or interesting. All it does is make mana in any color you need and avoid just about any average way it would fall down.

And that's precisely why I mention it here.

The Ingot is a sure-fire way to get what you want because it gives you access to any color on demand and doesn't need to be tended after or worried about. While it's a simple, mundane purpose served by an artifact, being able to do whatever-it-is-you-want without having mana issues to complicate things is always a reassuring bonus.

Darksteel Juggernaut doesn't make your other artifacts of any variety better or even watch out for its own well being: it just continues to pile the pain on as your array of trinkets and toys grow. And if you want a little addition that you might find handy with our darksteel friend here, I would recommend Vorrac Battlehorns.

That should make it easy to shout "Clobbering Time!"

When Magic 2010 came out I was surprised, yet pleased, to see Planar Cleansing staring back at me from packs. It had "replaced" Wrath of God in the Core Set but in reality it was so much more than that venerable classic.

While at a quick glance it looked like Akroma's Vengeance, the fact that Planar Cleansing scours away planeswalkers (something that didn't exist in the game when Akroma, Angel of Wrath first appeared) too is very handy. And just like with Akroma's Vengeance, everything that has the darksteel surname still stays around to help you after you finish a little planar housework.

It's the End of the Year as We Know It

Darksteel is one of those special words in Magic where if you're reading it in the title of a card you already know one fact about it. It may only appear on special occasions, but when it does, boy does it do its thing!

If you're feeling a little inspiration or think you've got a better idea than the few I've shown here today then I also have exactly what you need to do: send your contribution to the End of 2010 Deck Contest. I explained it at the end of two different articles so I'll spare the details here (just click a link and skip right to the end of the article to grab the details).

My point is that there is still some time to find a few cards, try out your ideas, consolidate your thoughts, and blow us all away. Duels or Multiplayer, Commander or Respawn Magic–whatever the ways you play are–I'm interested in seeing an awesome deck for it (just remember that the only rider to consider is that your deck should somehow deal damage through spells, abilities, or creatures).

So fire up the Gatherer, ask a few friends what they think, and get busy. Time before the end of 2010 is reaching the end of its countdown!

The next time you'll see a fresh, new article here is when you'll see all the winning deck lists from our end of the year celebration after the calendar has turned to 2011. I hope you've had an excellent year–as I feel Magic has–and that all your celebrations are warm, merry, and even magical.

Thanks again and I'll see you next year!