hen I was deciding how to present this preview card to all of you, I had an issue. Many of my readers are decidedly old-school players. You have been playing for ages. You are the Old Dogs. For you, Modern Masters is a walk down Memory Lane. Many of you have been playing since the old card style, the "Pre-Modern look," was the only style. Many others have started far more recently. For you, Lorwyn is a block from yesteryear.

This means that for newer players, the Young Pups, the card I'm about to introduce is practically brand new. You may have heard of the card, but you probably don't own it or have seen it played only once or twice. For you, a breakdown of just what the card does and its power in casual formats is something that would be helpful and exciting. 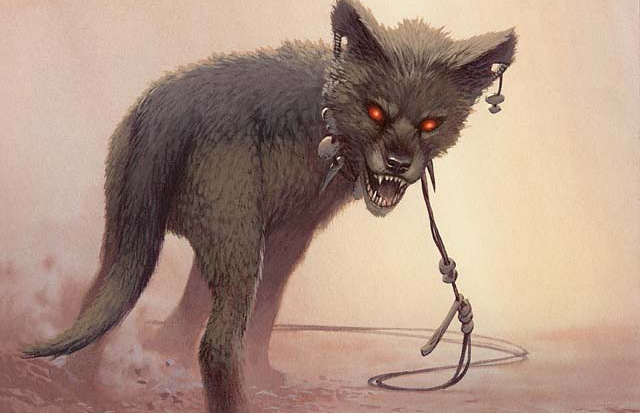 For the old-school player, once I reveal the name of this Mirrodin block rare, nothing else I have to say is really going to interest you. Explaining how the card works and what it means is a little redundant. You've already played with and against the card. You already know how it works in (or destroys) your metagame.

So how do I write an article that works for both of you?

If you started playing during Mirrodin or earlier, read on here.

If you started playing after Mirrodin, read on here.

I've been telling you since I started writing that I'm about fun. So I'm going to keep the fun rolling in this preview. I'll give you a few hints, and you can try and guess the card. If you just want to see the card, scroll down to the bottom. Although how is that really maximizing your EV?

Hint 1: I already gave it to you. It was a rare in Mirrodin. Immediately you are thinking of the various cards in Mirrodin. You are probably remembering all the artifacts in the set and the brokenness of the block. Do you have your guess all set? Let's see if Hint 2 changes things for you. 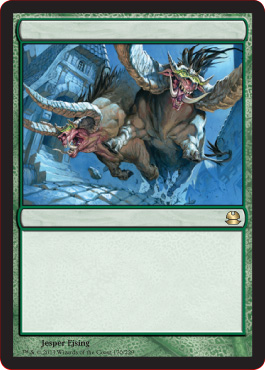 This should narrow things down plenty. You now know it is a green card. Based on the picture, I'd be looking for a creature card that involves two huge dudes. Admittedly, I'd be wrong, but I'm not very good at these sorts of things.

By the way, if you are really getting into it and working it out on Gatherer, you'll know there were only eight green rares in Mirrodin. If you look at those eight cards, along with this picture, you should have no problem guessing correctly. 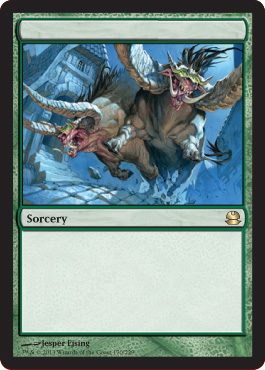 That should pretty much clinch it for you. A rare from Mirrodin, that is green, and is a sorcery. There is only one. At this point, a Gatherer search shouldn't even be required. I expect all of you have already figured out the card. For the few remaining people who need just a little more help, I'll give you another hint. 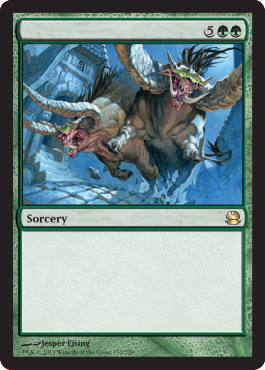 And there you have it! It is the green rare sorcery from Mirrodin that costs

! I for one am looking forward to getting another chance to play with this card again. I wasn't buying a lot of cards during Mirrodin block and actually don't own one of these yet. I expect to see this card flooding my metagame in the weeks and months to come!

If you're curious to see how the newer players were introduced to the card, click here.

Check out this card. What a beauty! 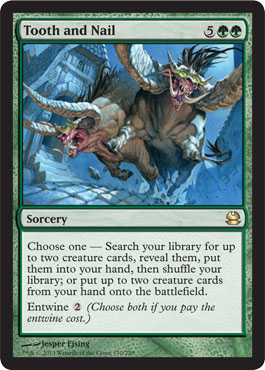 Once you've played with and against this card a few times, you'll see it is fairly straightforward. Revealing the whole card at once shows a wall of text and a keyword you have probably not seen before. In an effort to make it easier to understand, let's break it down piece by piece. 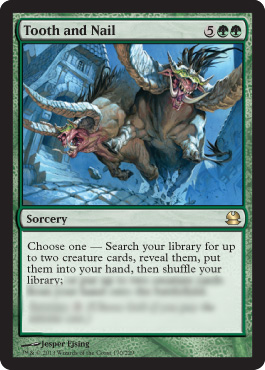 That's right, we are looking at Tooth and Nail, but only part of it. This sorcery costs

. You already know that if the card is in Modern Masters, it is a good one, and trust me, this card is amazing in casual games as well. Getting to the mana cost is generally not all that difficult, particularly when you realize how well it fits in with green's ability to get plenty of mana out early. The sorcery speed is also something to be aware of. When a card costs this much, and is a sorcery, you know the ability must be amazing if it is played.

I've only given you the first part of the text box. This is one of the options available on the card. Generally, when a card offers you a choice, you know you are getting a bonus. Choosing between two options on one card generally means you are getting value. So many cards let you do something, but it is only useful in particular situations. With Tooth and Nail, you get a choice, so if you don't need one part of the card, you can just use the other.

Tooth and Nail's first choice is simply amazing. Any time a card lets you search your library for a particular card you need,1 you know you are getting something good. In this case, you are getting two things and you are also putting them in your hand. Other tutors will find single cards, or will let you search for a card then put it on top of your library. Tooth and Nail gives you more.

This is pretty awesome, but I'm probably not going to pay

to get that effect at sorcery speed. It will likely mean that I'm going to be forced to leave both of the creatures that I searched for in my hand until my next turn, since I probably don't have the mana to pay

and cast them both. Check out the second half of the card: 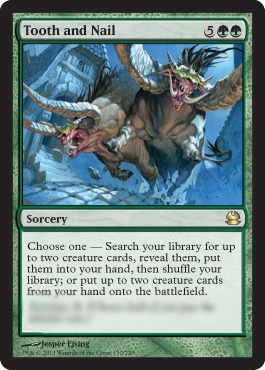 The second option gives you a way to cast two creatures out of your hand without paying their mana cost. If you are going to pay

for this, you are going to want those creatures to be ridiculously huge fatties. You want to drop a Primordial and maybe a Primeval Titan. There is no point paying seven mana to put an Elusive Krasis and Crocanura onto the battlefield,2 since they cost less. Another consideration is the colored mana. Tooth and Nail lets you play any two creatures, irrelevant of their colored mana requirements. Since we are in the midst of Return to Ravnica block, this is particularly valuable. Tooth and Nail can put Teysa, Envoy of Ghosts and Melek, Izzet Paragon onto the battlefield in a deck with only green mana sources.

All of this sounds impressive, but this is still a sorcery that costs

. There needs to be something more.

Entwine is what makes this card sing. For

you can search for any two creatures and put them onto the battlefield. Entwine gives the caster a third option that is probably what you'll be doing every time you cast Tooth and Nail.

This style of deck is a little nerve-wracking. You are simply playing out your early creatures to try and get enough mana to cast one of your more expensive creatures, or to entwine a Tooth and Nail and put two creatures into play that way. So much of your game with these decks involves crossing your fingers and hoping your opponents won't wipe out your small creatures before the rest of your deck can come and play.

While simply playing out these huge game changers is probably enough, the fact that Tooth and Nail will let you get two creatures at the same time means you can also set up a two-card creature combo, or at least two creatures that truly complement each other.

While playing a deck that requires you to get plenty of mana in play before it does anything can be a nerve-wracking way to play, a second concern involved with playing Tooth and Nail is that it has become such a staple in casual play that it evokes a visceral response. When talking about Commander, Cassidy McAuliffe over at legitmtg.com said, "Playing Tooth and Nail causes half the table to concede and the other half to flip over the table, fly into a maniacal rage, and try to beat you to death with your own trade binder." As a newer player, you'll probably get a little more leeway, but take care when you are walking into games with unknown opponents!

I'm looking forward to getting a second chance with this card. I wasn't buying a lot of cards during Mirrodin block and, for whatever reason, this card is not in my collection. I hope we all get the chance to Tooth and Nail into some truly exciting and bizarre pairings!

1: In the Magic community, this is often referred to as "tutoring." Several cards in early Magic that searched for a card included "Tutor" in the name, so the term has stuck. (return)

2: I talked to the Rules Gurus, and both cards will evolve. Even still, two tiny guys like this seems like a bad use of Tooth and Nail.(return)