ave you ever been overwhelmed by options? Say, for example, you sit down in a diner. It's a 24-hour joint, so you can order breakfast, lunch, dinner, or dessert any time of day. Let's also say you're traveling to a Magic event (perhaps for Grand Prix Minneapolis this weekend, or Grand Prix Anaheim next weekend, as I am) so you won't be back again. You have one chance to sample something you might never see again. 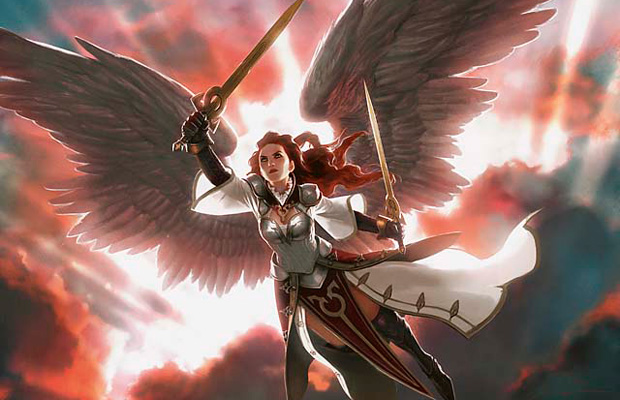 How do you choose?

There are a lot of strategies, but the one I prefer is to simply try what the locals are having. What's the special everyone else is enjoying? What's the place known for? What's the most common order coming out of the kitchen? With a few well-placed questions and some patient observation, you dramatically increase the odds of what you're about to step into will be something worth remembering.

I hope that analogy helps you understand why I ask you all a question every week. Here's the one from last week.

What's really awesome about this particular poll is that after a day or so, long after many of you are clicking through to read the article, the poll was at a very close tie between Gisela and Griselbrand. While the final result tipped the scale to Gisela, it didn't seem right to leave such a close race at that.

Today, we're playing both good and evil. I hope you're ready.

(And before we get too far, I just want to gently remind everyone that when I build Commander decks I build them from whatever I have in my Commander Box. Not every card and combination will be available, so if "something obvious" is missing please let me know—you could help me add the next neat thing to my collection!)

You know what this heavenly creature reminds me of? 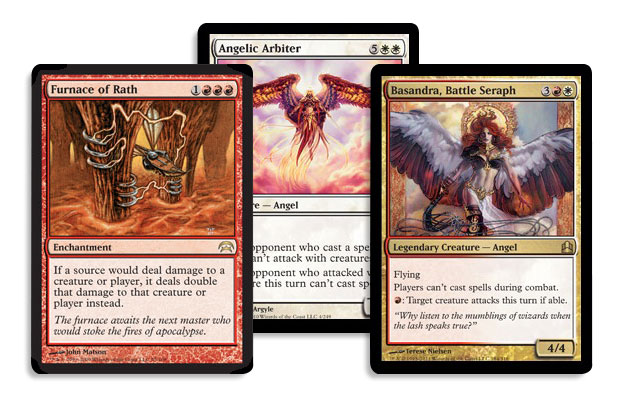 Yeah. I've seen Angel-themed Commander decks before, but Gisela isn't your usual type of Angel. She's a battle-hardened killing machine who empowers the Planeswalkers who summon her (that is, us) to create a cataclysm for our foes. Note her wording:

This is the same type of wording as featured on a very different enemy-colored commander: Edric, Spymaster of Trest.

Everything dealing damage to our opponents gets in on the deal, which in Gisela's case means the damage is doubled. This firmly draws me to three ideas:

There isn't too much to say here. Angels come in mostly large-sized flavors, giving Dragons a run for the money, and pack a plethora of useful abilities. The general goal is to play some Angels and make the most of the flying host. That's half of Gisela's shtick.

The other half is to incentivize opponents' attacks elsewhere.

I've pulled out the usual spread of things that clear the battlefield and exile annoying things, but any excuse to slam Kazuul, Tyrant of the Cliffs onto the table is good enough for me. And with the abundance of Angels flying around we'll usually get to make the most of him.

Of course, all these goodies are only wonderful when our plan is fully powered.

Many of you are huge fans of Sol Ring and other little artifact mana sources. I don't always like to break them out, but the overload of high-flying and expensive-to-cast Angels makes me want to hurry up and cast them. The results of this entire mash up looks like this:

Gisela to the Rescue


Just like every Commander deck I make, I ended up with a few more ideas than I had room for and found a few more I felt I wanted. While Angels are powerful in their own right, handing them almost all of the powerful Swords from both Mirrodin blocks—Sword of Light and Shadow, Sword of Feast and Famine, Sword of War and Peace, and Sword of Fire and Ice—ensures we'll have very good odds to bring out Gisela and connect with a defending Planeswalker.

A few other tricks that popped up:

If this kind of high-flying, fast-bashing deck is your thing, that's great. Some of you prefer a very different type of Commander experience, though, and Griselbrand can deliver on that.

Griselbrand isn't a silly mean Demon. He isn't an annoying taskmaster, requiring sacrifices or payments. He's actually quite generous, giving you free reign to convert 7 life into seven cards. If that sounds familiar, it's because it's an effect that's dominated the game over time.

As it turns out, this power is magnified the more life you have. We start with 40 life in Commander. We could potentially activate Griselbrand five times to draw thirty-five cards, all in one shot. While there are a lot of game-breaking things drawing thirty-five cards can do, we're going to focus on one specific spell: Exsanguinate. It works like this:

I've been looking at building a black-based Commander deck for some time, and Griselbrand demands to push black as hard as it can go. Making Exsanguinate a win condition in of itself isn't all that Griselbrand should be able to do. I know I'm going to want other things:

It was the Demons and their toys that came up first.

I'm certainly short on piling up enough Demons to call this a "Demon deck" but it's a sufficient army to be battling with. Equipment like Loxodon Warhammer, Basilisk Collar, and Umezawa's Jitte can help fuel some life gain for us, which is handy with an assortment of ways to make the life go farther.

We're not waiting around here. Life makes cards, cards make life, and we crush anything that starts to get out of hand before we play our gambit. And like his quasi-nemesis in Gisela, Blade of Goldnight, Griselbrand wants to come out to play as fast as possible.

You've asked for it, so there it is in all its glory: mana, beautiful mana. These empower our X spells, ensure our baddies enter the battlefield, and generally support our efforts to hit better than all. When we shuffle everything together, this is what piled up:


It slices. It dices. It drains a ton of life, draws a ton of cards, and makes the most of the big-mana style that Commander is famous for. While Exsanguinate can nail everyone at once, Drain Life and Consume Spirit can function just as well for life-absorbing spell blasting. Of course, it wouldn't be Commander without a few extra options added at the last minute: 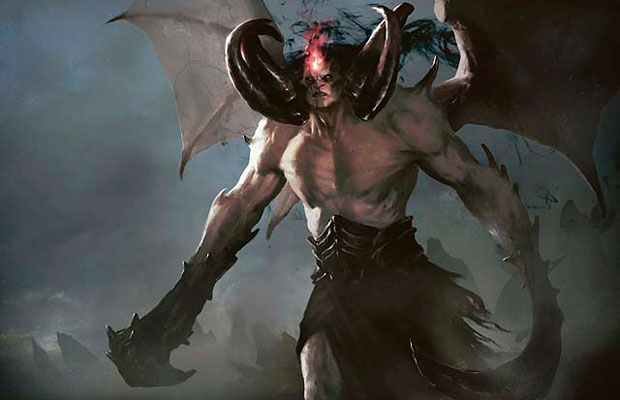 While Liliana Vess might have struck him down, the wonder of Magic makes it so we can relive Griselbrand's dark deeds for ourselves. And if you have far more powerful things to do with Griselbrand—because I know they're out there—please share them on the message boards!

While Gisela won the vote by a slim margin, neither she nor Griselbrand took the majority. In true representative democratic fashion, here's the follow up vote to choose the ultimate winner.

Whether it's the forces of light on a march to victory or the powers of dark dropping headshots, the bonus deck I'll have on hand is entirely up to you. Note that I still have our Ghave, Guru of Spores deck on hand to double up the options for community-driven decks.

Can you feel the love yet?

Join us next week when we begin chasing the planes again. See you then!