there is one card that I’m associated with here at magicthegathering.com, it is Morphling. Which is odd, because it’s a card that I don’t play with a whole lot.

But still. My first article for magicthegathering.com, oh those many years ago, was an entry on the proposed FlavOracle text for Morphling. And then, when I began writing articles on multiplayer, I talked about Morphling a lot because, well, my good friend Dmitri, that former blue addict, played with Morphling all the time, so I naturally discussed it all the time.

Some might think I have Morphling on the brain. But no! I have Morphlings in my face, because people keep attacking me with them. It’s not a pleasant experience, getting smacked with the Morphling.

So why, you might ask, if you’re not addicted to the power of the morphmaster, are you discussing Morphling yet again?

Because the folks at Wizards have noted my repeated discussion of an old classic. And given that this is chaos – Planar Chaos, mind you – it might just be that Wizards has decided to give me the new twist on an old favorite. And it’s a lot angrier this time around.

It’s funny how a card can be almost identical but play so differently. Novice players like to think of cards in isolation, as if a card won a game on its own without help from the other fifty-nine contenders surrounding it… But experienced folks know that the company you keep cardwise is what determines how you win.

Because the old Morphling was blue – the color of counterspells and protection and flying. Which meant that Morphling was your go-to finisher (well, at least before Psychatog, which was mercifully not shifted, came to town) for anyone playing any sort of control deck. It would be hard to think of Morphling in a creature rush deck, because the whole point of the ‘fling was that you established control with your other spells and then slowly chipped away at your opponent’s life total. 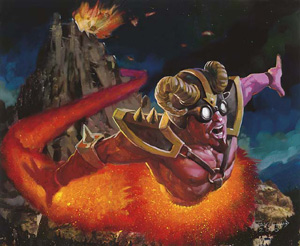 A red Morphling – sorry, Torchling – cannot do that. Red’s not so good at protecting itself; it wins by blowing its opponents’ stuff out of the water, usually with direct damage, and then by swarming with little guys.

So what does that mean? Well, even though the blue Morphling technically had both a +1/-1 and a -1/+1 ability, under normal circumstances it was only pumped to boost its power after it had been gifted with the beauty of flight. You could boost its toughness to block, of course (and people often did in a pinch), but generally if you were engaging in aerial combat with your Morphling you were losing.

The red Morphling? Well, considering that he doesn’t have flying, he’s going to have to get his hands dirty. You’re going to do what we professional multiplayers call “the boingy-boingy” – pump the power up to 5/1, put damage on the stack, and then before the damage resolves you’ll pump the toughness way up to ensure that it survives. It’s a hard way to make a 5/5 guy, but it works.

(I should note, for you clever people, that there’s no way to give it six power without it dying – well, unless you boost its toughness some other way. People used to argue this with judges back in the day, and they always lost; by the time you get it up to 6/0, the game checks for state-based effects, and boom! Dead Xling.)

But, we should add, the Torchling is better equipped to go into combat. Why? Because of that handy “Target creature blocks Torchling this turn if able” clause. If you get into a stalemate – as many multiplayer games often do – you can use the Torchling to send in with your dude, put fatal damage on the stack, and make its significant butt swell up like a balloon to endure just about any damage your folks feel like bringing on. You can start taking down the guys you want, one by one, assuming you have the mana to pump it if they spontaneously decide to block with everything. 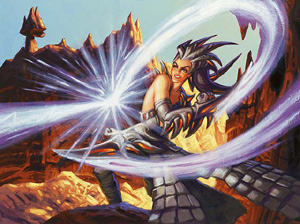 The problem is that some folks, rude as they are, may actually try to take out your Torchling with a spell! The nerve. But fortunately – sorta – Torchling has yet another ability that lets you can redirect any spell cast at it.

The only issue is – and oh, I must be honest here – how often will that happen? People would sometimes blow a spell or two at a Morphling just to see you use up Counterspell mana, since you paid the blue to have the spell harmlessly shed off the untargetable, glassine back of your silly little Morph. But the Torchling… well, if you have a red mana open, the opponent foolish enough to aim a spell at its gloriously-drawn head (just look at that art!) deserves everything they get. And they will get it, because you’ll redirect that spell to whatever other legal target you see fit (generally theirs for having the impudence to harm you). So while it’s a sexy, sexy ability, it’s not going to get used as much as we’d hope.

So what we’re left with here is a brawler. The old Morphling? He was sneaky, flying across the air as you quashed your opponents’ threats one by one, ending the game in four turns. Torchling can’t play that game, so he must play the game of his own.

He must play the game of finisher. And to do that, he must utilize Red’s strengths. Namely, direct damage.

You see, the Torchling untaps for a single red mana. Fire Whip is an enchantment that allows you to tap the Torchling to do a point of damage to anything that can be targeted. Oh, it lacks a certain elegance, but what are your opponents going to do? Well, they’d better have a global destruction effect, since as long as you keep a red mana open to redirect, they can’t hit the Torchling.

And since we’re untapping a lot, why not bring out the Granddaddy of all untappy-effects: Your pal and mine, Seedborn Muse? Ah, this Legions classic is outrageously overpowerful in conjunction with just about anything, but a Torchling-equipped Whip with a boatload of untaps should do quite nicely.

4 Birds of Paradise 4 Magus of the Scroll 4 Shock

There ya go; the whole point is to get a Seedborn Muse out and protect it with pretty much everything you have – if it dies, as it most likely will, then fetch it back with the Eternal Witness. Because once the Seedborn’s out, then you can slap a Fire Whip on the Torchling and go to town, following up with the much harder-to-use Jaya Ballard and Magus of the Scroll in a pinch. It’s not quite going infinite (which many groups consider unfair), but it will decimate whole hordes of dudes.

(If you want infinite, combine Sekki, Seasons’ Guide with Pandemonium. Play Pandemonium, target Sekki with his own eight damage, put eight 1/1 tokens into play and distribute eight damage as you see fit, sacrifice the tokens to get Sekki back… But hey. This is a Torchling preview.)

Then again, you could get sneaky. “Red’s not sneaky,” you say. But red does have a long-forgotten enchantment that makes it difficult to untap. That enchantment’s name even goes well with Torchling….

Smoke makes it impossible for your opponents to untap more than one creature at a time... And the Thundermare taps everything, making it even harder for people to keep anything back to block. Whereas your happy little guys don’t care about smoking enchantments, because your Torchling untaps at will, your Foriysian Totem won’t be a creature come your untap step, and the rest of ‘em have haste to get a good shot in. And if your opponents rudely leave stuff back? Heck, take that blocker with Word of Seizing and go to town!

“But Ferrett,” you cry. “Ball Lightning’s so expensive!” Well, fortunately, we have the sweetest card ever printed by Wizards, which is not only Thundermare-like but it is green. Thus, if you wanna save some bucks on old cards, let’s go with an R/G version where you can spend money on new cards!

Torchling: It’s not Superman… Not quite. But given a little love, it can be your hero.