Soul Warden gets a face lift

we took all of the multiplayer decks in the world and smooshed them together…well, we'd probably bust a bunch of those really weak card sleeves you pay $8 per pack of 50 for. Then, after that, we'd sort out all the cards and put them into piles by card title. And once we were done and took away the basic lands, I'll bet you that one of the ten highest piles would be this card:

Soul Warden represents a “perfect storm” of no less than five elements coming together:

Add in her lovely artwork, and the fact that white mages who date back to Exodus also generally have access to board-clearing bombs like Cataclysm and Wrath of God, and you can see the appeal this creature would have to many white decks.

So she gets played. A lot.

And then she gets torched. A lot.

While usually not important enough to waste a Terminate on, the Soul Warden gets picked off by hundreds of lesser black and red spot removal spells. Seal of Fire. Echoing Decay. Fire (of Fire/Ice). A cycled Death Pulse. And so on.

Personally, I have no problem with this. I find Soul Warden highly annoying. Of all the “animal elements” I've described here at Serious Fun for multiplayer cards, “pigeon” is my least favorite because it depends solely on one question: how many people are there? Cards that are good simply because lots of people happen to be milling around just feel, well, stupid. After all, if the point of the game is to reduce the number of players around you, why would you want cards that get worse as the game progresses? (The worst offender is Congregate, which is so ridiculously good in the mid-game, and then often useless in the showdown between the final two players.)

So when a Soul Warden dies, I'm fine with that. Sometimes, I even contribute. One play I'll remember for a long while involves three Soul Wardens shared among two smug-faced opponents…and an Arc Lightning.

So now that my feelings on the card are clear, you can imagine how I feel about this evolutionary step: 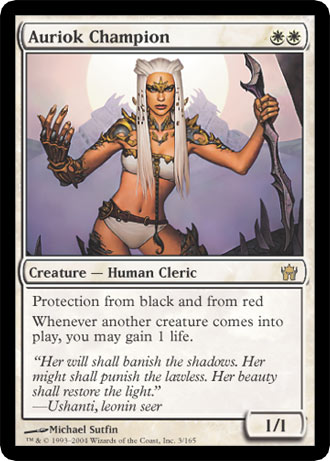 Warden It Be Nice…To Have Protection?

The most obvious difference between Soul Warden and Auriok Champion is the protection from red and black. Short of some old-school (Prodigal Sorcerer) and/or obscure (Unyaro Bee Sting) cards, you are leaving your opponents with very few choices for removal. As a public service, I'll list the major options:

But let's assume, for now, that we want to see the Auriok Champion stay in play for a while. How does the protection best help it?

Given a choice between facing a black mage and a red mage with this thing, I'd take the red mage every time. Red has fewer mass removal spells that get around protection, cheap fliers the Champion can't block, virtually no discard to get the thing out of your hand before you can play it, and only one true outlet for getting past an effective life-gain strategy: massive damage to the head. A simple Story Circle on the turn after you play Auriok Champion ought to be the end of the red mage.

Meanwhile, against black you should still be a bit edgy. Beyond the discard and the mass kill and the relatively cheap flyers, black also sports fairly impressive life drain spells – chief of which are Consume Spirit (which can go through a Cabal Coffers…red has no equivalent here), Syphon Soul, and Subversion. It's actually quite possible for a successful black mage to outpace your life gain, if you're not paying attention.

Bear in mind both black and red also each have a single tool at their disposal to ruin your life-gain plans: Forsaken Wastes and Sulfuric Vortex. If you play a deck like the one I'm about to list, make sure you keep room in there for a Disenchant (or at least an Aven Cloudchaser).

Seriously, how stupid is Pentavus in this deck?

Don't forget this trick, in the right situation: you can Swords to Plowshares one of your own creatures (say, a blocked Ageless Entity), gain the life, and add it to another Ageless Entity (you know, the unblocked one). Won't come up every day, but keep your eyes open.

One of the better steps Wizards has taken with triggered abilities involving life gain is to make the gain optional for the controller. Auriok Champion (like Leonin Elder before it) is an excellent example. This does two things – first, it helps the controller avoid situations where he or she may not want to gain life. (Beyond Transcedence, there aren't too many; but they do exist.)

Second and more importantly, it puts the burden of gaining life on the controller, and not on the entire table. Rewind to Exodus-era life gain. Since Soul Warden's life gain is not optional, you can't “miss” it. (If you've been letting someone “forget” their life gain from Soul Warden, you shouldn't. It's not just a matter of sportsmanship; it's also the rules on the card.) This results in situations where someone will say, “oh shoot, I forgot to gain life these last few turns…how many creatures got played?” And then everyone stops for a moment and figures it out.

With the Auriok Champion, there is no going back. Each group will have to set their own rules based on their individual culture; but I'd recommend the following guidelines to handle situations like this (which include just about any triggered ability that some opponents may wish the controller would forget):

Should I Hurry Out And Get Four?

I'm not crazy about Auriok Champion from an opponent's standpoint, but I understand it's going to be very good for a lot of players. A lot of life-gain enthusiasts are going to try hard to put four in a given deck.

Since the Champion is rare (compared to the common Soul Warden), this may not always be easy. Readers who know I evidence an independent streak in this space from time to time may reasonably ask me, “do you recommend breaking our necks to get four copies?” And I'd feel pretty compelled to answer, because the Champion blends two things – efficiency and life gain – in a way that may excite newer players.

My answer would be: no, don't kill yourself getting four, unless you don't care what I say because you've been drooling since the beginning of this article. (Babies and dogs don't count.)

But I don't say “no” because I believe the Champion is bad, or because I'm churlish about life gain. This card will get at least some thought in constructed tournament circles, depending on how prominent black and/or red decks become in block or Standard as Fifth Dawn rolls out. (My prediction: it will find a niche in block constructed, but not be good enough to compete in the overcrowded two-mana slot for white weenie in Standard.)

I also believe that if you draft enough, you'll pick up a “free” copy or two just from seeing them go partway around the table. While I'll defer to any opinion Monday columnist Scott Wills cares to render, Auriok Champion doesn't feel to me like an astronomically high draft pick. I see it more like Beloved Chaplain from Odyssey – nice to get, nothing you kill for. It shouldn't attract much rare-drafting attention (see: Chrome Mox), so as long as you're sitting within a few seats of one, your white deck should get a crack at it.

If you're intrigued by the combination of protection and life gain, and want to try Auriok Champion in your homegrown deck, you should simply keep your eyes and ears open…and be patient. It will likely trade as a typical rare, and typical rares gently come down in price after an initial buying frenzy. But my first impressions are no substitute for real research. I say this often when I preview a rare: before you get too excited and trade away multiple rares just to get one, do your homework. Scan the Internet, visit your local store, flip through a price guide or two. Whether this thing trades for $2 or $12, you should be an educated consumer.

Join me next week, when I won't tell you any more about the preview two weeks away than I will today about what's coming seven days from now.

You may contact Anthony at seriousfun@wizards.com. Anthony Alongi cannot provide deck help, but will be happy to mercilessly mock your preference for life gain.