In Praise of the Worldsoul, Part 2

See Part 1 of this story here.

ecilee came to build gardens. Instead, she built walls.

At first, the woodshapers made the walls around their settlement shoulder high—enough to keep out the wild boars at night. Then they put a lock on the gate to keep out troublemakers, like the Azorius arrestor who kept imposing fines. Just days before, the woodshapers raised the walls to twenty feet high. The Gruul were angry with her, and Cecilee was worried it wouldn't be high enough, even though she now felt like she was living in a prison.

And it was true. The walls hadn't been high enough. But the Gruul had nothing to do with it.

When they first settled in the Rubblebelt, Cecilee felt dizzy in all the open space. On most days, the edge of the city was just a blue smear through the haze. She and her followers built their first home on an open plain near the sprawling ruins of a tenement, now draped with emerald vines. The floors of the building had rotted away, leaving jagged walls leaning on piles of rubbish. With enough woodshapers, Cecilee wondered if the ruins could be animated to walk away and leave the Rubblebelt for good. 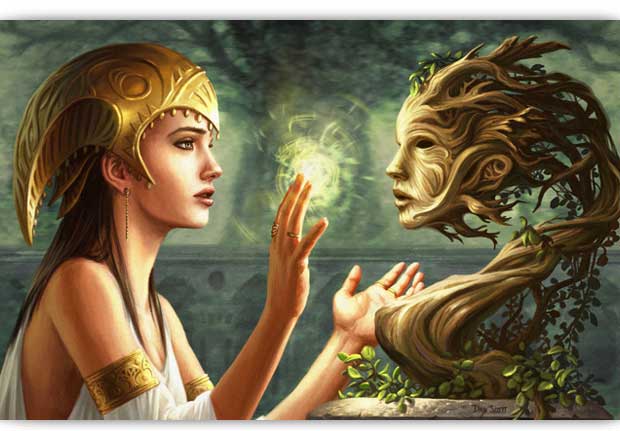 For the first time in Cecilee's life, the sky dominated—an expanse of blue that kept luring her eyes from the dry, red soil where they planted seeds. She dreamed that Selesnya gardens would soon engulf Rubblebelt. They would inch down the destroyed land and beyond, reclaiming the filthy city and its stone grip on the world. The Rubblebelt was the home of the Gruul, a disjointed collection of savage clans who claimed the abandoned zones of Ravnica. To appease their Gruul brethren, Cecilee wanted a wild, tangled garden unlike the manicured lawns of Selesnya. She wanted a place where the Gruul would feel at home.

In the early days, Cecilee's first priority was to build a healing center. The Gruul had healers of their own, but they were nomadic and moved haphazardly through the Rubblebelt. The Selesnyans offered a constant and reliable place to come. To Cecilee's delight, they did come; not in large numbers, but enough for her community to feel like it was doing good work. The Gruul refused the Selesnyan teachings, but Cecilee believed that would come in time.

But then they adopted Zi, and everything changed. The scouts found the infant abandoned in the Rubblebelt and brought him back to the vernadi. She unwrapped the baby from his tattered blanket and saw a Gruul tattoo on his back. Disbelief spread through her community. How could the Gruul be so savage as to desert a child? Cecilee named the child after her brother, Ruzi, and took him into her home to raise as her own son.

Sometimes, Cecilee found herself wishing for her brother more than she prayed to the Worldsoul. She had spent her childhood tripping in Ruzi's shadow. He could shoot better and run faster than her and could outfight any youth around Vitu-Ghazi, the City-Tree. But he always looked back to make sure she hadn't stumbled, and he never forgot to hold her hand across the dangerous places. Ruzi was the only one who insisted she could talk, although he—nor anyone else—had ever heard her speak a word.

And then one day Cecilee did speak. She stood up abruptly during a gathering at the heart of Vitu-Ghazi, the City-Tree, just as the Trostani, Selesnya's Voice was finished with her recitation. And everyone—from the centaurs stamping on the balcony to the wolves sprawled beneath the benches—fixed their eyes on the wisp of an elf girl, a mute no longer.

Words of praise tumbled from her without pause, a recitation in praise of Selesnya so beautiful that even the eldest of the dryads were humbled. She is a conduit to the Worldsoul, they said. They celebrated her emergence as a mouthpiece of the fundamental and epic truths that could only be spoken by the communal mind. Ruzi acted like she had sprouted a second head. But Cecilee ignored his concerns. She felt the Worldsoul like others felt the patter of the rain. For her, it had become a tangible, all-consuming, and life-nourishing gift. 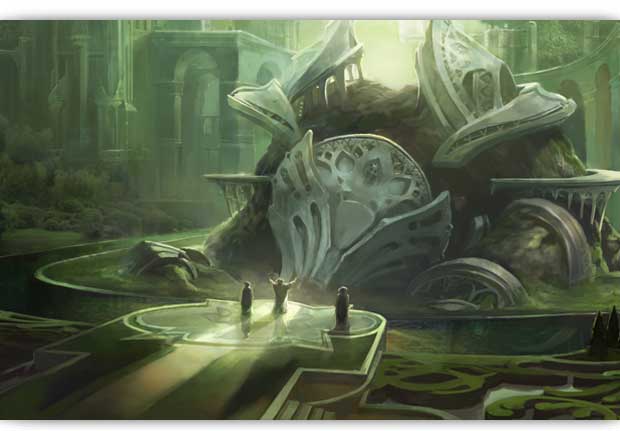 Grove of the Guardian | Art by Christine Choi

When Cecilee felt called to establish a settlement in the Rubblebelt, only Ruzi counseled her against it. The dryads sang her praises, saying she was the gardener who could cultivate the most savage of them. Ruzi told her to think of her own skin. By then, Cecilee couldn't separate herself from the whole. She saw the Gruul as hardscrabble kin of Selesnya. They shared a common love of nature, after all. Nature that was being strangled by the ever-growing demands of the world-city.

Ruzi tried to explain that the Gruul saw things differently. To them, Selesnya's immaculate gardens were a falsehood. Yes, blades of grass could be fashioned to paint a picture of harmony. But Ruzi warned that harmony was not a music that the Gruul can hear. Not above the din and clatter of their warlike spirits. But love and acceptance must prevail, Cecilee insisted. Selesnyans must strive to win the hearts of their enemies. No matter the burden. No matter the cost.

And so she went, leading twenty followers, to the wildest place any of them could imagine. And they began to make a home. A home with open arms, open tables, and healing hands.

Each night, Cecilee tried to commune with the Worldsoul. She pleaded to the communal mind for perfection through unity. And her little community grew a little each day, just like the sapling of the guildtree blossoming in the dusty courtyard. Cecilee promised her followers that someday their roots would stretch across Ravnica and all voices would praise the Worldsoul. 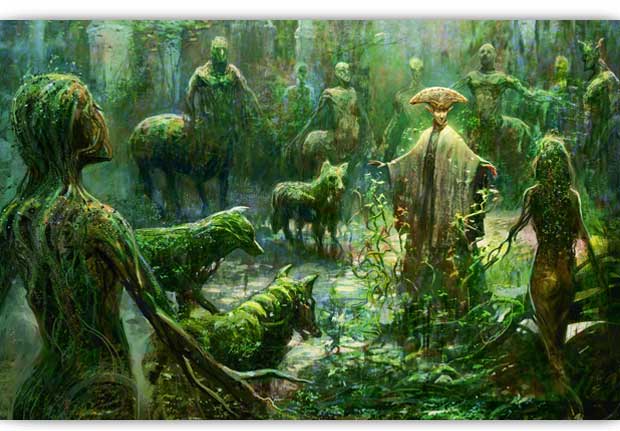 But they had been harassed at every turn. The Azorius cited statutes about why their healing center was illegal. An Izzet mage babbled about arcane energy and portals and demanded they leave. After Cecilee adopted Zi, the Gruul sent a woman to take him back. The woman was a shaman from Nikya's clan. She explained that Nikya claimed the boy as kin and demanded he be raised as Gruul. But Cecilee wouldn't listen. Zi had been left to die in the rubble, and she couldn't bear to give the boy to a stranger.

After that, the Gruul stopped coming to the healing center and attacked the Selesnyans if they ventured too far from their walls. Each night, the Gruul bonfires seemed closer to their gate. Some whispered that Cecilee should return the boy.

Just before sunrise, their gate flew off the hinges and splintered on the ground. With a single strike, their safety was shattered. A massive ogre with a mutilated face was first through the gate. Cecilee told her followers to run, although now the walls penned them in. Alone, Cecilee stood in the courtyard with her arms raised, as if her slender body could stall the intruders. A strange, sinewy woman strode across the threshold, followed by more brutal, scarred men. From the sight of piercings and street clothes, Cecilee knew they weren't Gruul. 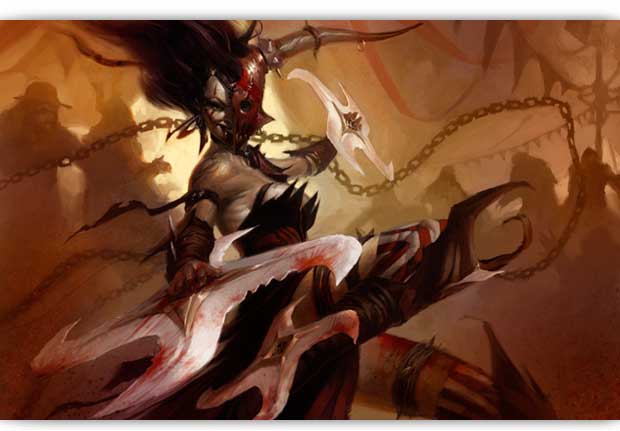 The woman struck Cecilee in the mouth and sent her reeling down into the mud. As Cecilee struggled to her knees, the woman struck her again. There were many people under her care, but all Cecilee could think about was Zi, sleeping in his cradle.

"I could snap your arms like twigs," the woman gloated. To Cecilee, she looked like an ugly doll, starved to skeletal form, with a fake painted smile. The woman ripped the young guild tree out of the ground and hurled it across the courtyard; her minions howled and danced, delighted by the mayhem. Cecilee couldn't move, shocked at the disregard of the priceless thing that had brought her so much joy.

Cecilee hadn't seen much of the world outside Vitu-Ghazi, the City-Tree and knew little about Ravnica, even the corner of the Rubblebelt she now called home. She didn't know the woman was a for-hire Rakdos killer who called herself Massacre Girl. Confronted with violence, Cecilee's limbs felt thick like stone and her mind was just useless sand. The woman took out her rusty blade and chopped the blonde hair from Cecilee's head. Laughed as she did so.

"Are you a cow?" the woman wondered later. Cecilee's followers then lay dead, face down in the mud. Yet Cecilee still knelt, surrounded by the blood and dirt and the golden locks of her hair. The woman seemed genuinely curious by Cecilee's lack of action. "Why do you do nothing but sit?"

But Cecilee had become mute once again. The roots carrying life to and from Vitu-Ghazi, the City-Tree were severed. The wisdom of a thousand souls became nothing more than a wordless hum in her overwhelmed mind. There was just the woman and her rusty blade cutting Cecilee's throat in that devastated land and the darkness of the world.