In Praise of the Worldsoul, Part 3

uma smelled the blood before Ruzi saw the smoke. The wolf sprinted through the clutter of ruined buildings, rapidly closing the distance between them and the Selesnyan settlement. The wooden gate had been ripped from its hinges, and Ruzi urged Kuma through the shattered entrance, heedless of whatever threat might be inside.

The two surprised Massacre Girl and her men as they searched the bodies for anything valuable. At the sight of a Rakdos bloodmark dripping down the wall, Ruzi yanked the knife from the sheath on his leg and gutted the first degenerate that leapt toward him.

But before he could yank the blade out of the man's throat, the cultists surrounded him, swinging spiked maces and bloody chains. Ruzi had dealt with Rakdos in the past. They were beyond compassion: Life was as unremarkable as air and killing as easy as breathing.

Kuma's growl reverberated off the high walls. Out of the corner of his eye, Ruzi glimpsed the bodies of his fellows Selesnyans near the desecrated guild-tree. Cecilee's body would be among the dead, and that knowledge made Ruzi weak. Too weak to defend himself against this many enemies. 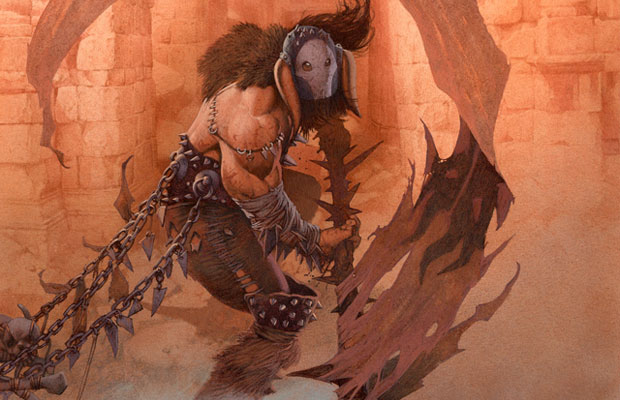 Their skin-and-bones ringleader skulked outside the circle of her thugs, themselves covered in freakish spikes and scars. She was a lunatic who called herself Massacre Girl. He knew her reputation. He'd seen the aftermath of her crimes before. And he knew there was only one reason she would be here.

"Who hired you?" Ruzi screamed.

Massacre Girl motioned to one of her followers. An ogre armed with hooks-and-chains lurched forward. A dented metal mask partially covered the nearly eight-foot-tall ogre's mutilated face. Snarling, Kuma circled away from him. Ruzi thanked the Worldsoul for the wolf's steady legs, as his own were trembling. Ruzi's emotions had betrayed him. Even if he could notch his bow in time, his shot wouldn't be steady enough to hit the Rakdos.

"Price paid. Don't care." Massacre Girl squinted at him. "Do I know you, dogboy?"

"These were innocents!" Ruzi snarled.

"No one cares," she said. She began humming, and did a little dance step. Then, singing loudly—no one cares, no one cares—her taunts echoed across the bleak courtyard.

Turning to leave, Massacre Girl reached into her patchwork jacket and pulled out a handful of colorful confetti. Tossing it up into the air, she did a twisted bow and sashayed for the gate. Following her cue, the rest of the cultists made for the gate. All except the ogre, who swung his hooked chains in a brutal arc. 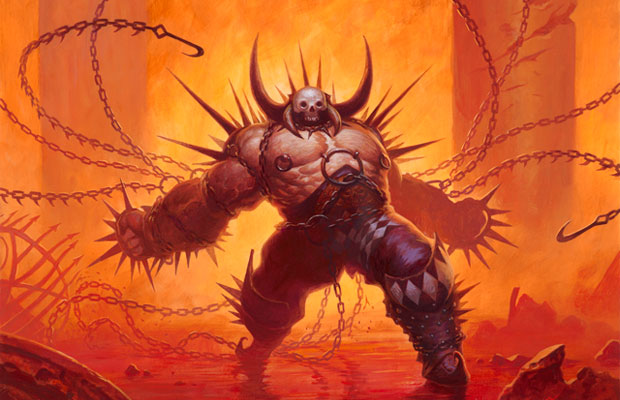 Kuma tossed his head against the reins, but Ruzi held Kuma back just long enough to memorize the space between them and the ogre. Just long enough for his wolf's instincts to claim that space for killing. And then they danced across the span, breezing between the whisper of the ogre's chains.

Expecting a frontal assault, the ogre charged at them mindlessly. Instantly, Ruzi spurred Kuma to the left, dodging a downward stroke of the razor-sharp hook. With a powerful burst of speed, the wolf leapt toward the wall. Ruzi pulled back, and Kuma sprang against the boards, twisting backwards to come around behind the ogre. The ogre roared in surprise as its chains fell, useless, to the ground. It spun clumsily to meet their attack, but the wolf's teeth closed around its throat before the ogre could raise its meaty arms to defend itself. The ogre toppled to the ground, while Ruzi leapt off the wolf's back with his sword drawn.

Feeling murderous, Ruzi sliced off the ogre's head while the it still lay blubbering on the ground. He avoided the sorrowful eyes of his wolf as he stalked around the courtyard, checking for anyone else who might have stayed behind. At that moment, Ruzi would have happily slaughtered anyone who had ever called themselves Rakdos. 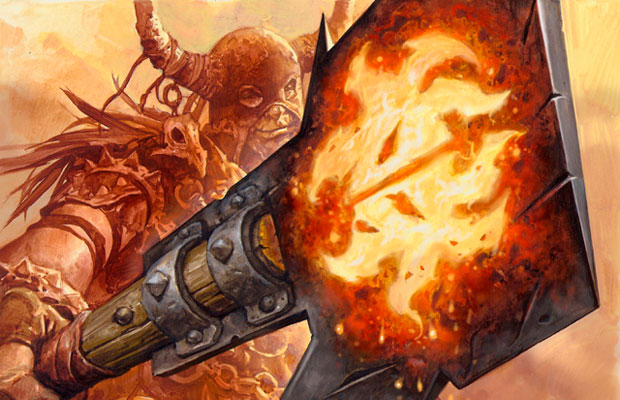 Even when he was sure the courtyard was empty, Ruzi did not pause to search for his sister. He was afraid if he acknowledged the atrocity, he would fall to his knees and never find the strength to rise. So he took a shovel and began digging as if his own life depended on it. Indeed, he had to get it done before the scent of blood drew the beasts and savages. Life was about the work. Life is work. And without the work, there is nothing. Kuma curled up near Cecilee's body, watching mournfully as Ruzi worked frantically for hours.

Ruzi had first heard of Massacre Girl years earlier, when she killed one Azorius arrestor for coin and a second just for fun. She had become untouchable by threatening the lives and families of anyone who tried to stop her. Once, the father of one of her victims tried to kill her in vengeance. When he failed, she slaughtered the male line of the family and blinded the women. The Azorius would not lift a finger to arrest her for murders in their own guild. They certainly would do nothing for the murder of Selesnyan elves in an illegal homestead.

To kill Massacre Girl, Ruzi would need the help of his fellow Wolf Riders. But Trostani would never permit a vengeance-killing done by her guild. If justice was to be done, Ruzi must break from Selesnya and find another way. Although he couldn't bear to look at his sister—not even as he placed her body into the mass grave—he knew that destroying Massacre Girl must become his purpose in life. If he had to burn down the entire city to find her rathole, he would do it.

Only when the last body was buried did Kuma come and rest his head against his master. Only then did Kuma insist that Ruzi take a moment to grieve. As Ruzi wrapped his arms around his wolf, he wished he could give himself over to the Worldsoul. He needed comfort, and his inner voice told him he would find it there. But he silenced the voice instantly. Little good it did Cecilee, he reminded himself. Little good it did for the dead. 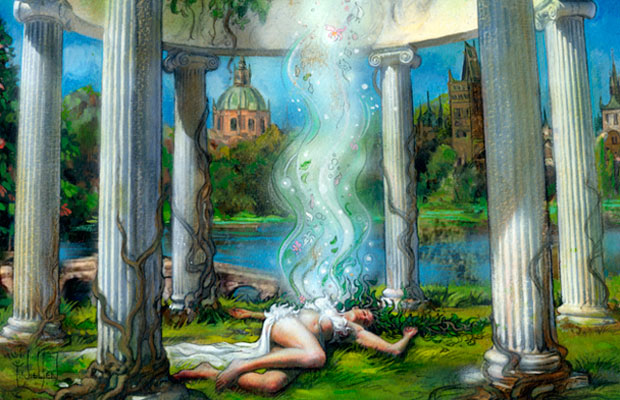 Kuma heard the sound first. His ears perked up and he whined. Ruzi was on his feet instantly, expecting an attack. But it was not the returning Rakdos. Or Gruul scouts, although he'd been expecting them. It was the sound of a crying infant, suddenly awake and very alone, sobbing for its mother.

The cradle had been hidden under a table and behind some boxes in Cecilee's cottage. The baby—his nephew—quieted when he gently picked up him. A Gruul baby. A baby they wanted back. He knew they would go to great lengths for the child, but not enough to hire the Rakdos to kill the entire community. Whoever hired Massacre Girl was someone from the city proper, someone who had coin to waste on murder.

Looking down at the sweet face of the infant, now drowsing against his shoulder, he knew how to make someone else care about killing Massacre Girl.

Ruzi found the Gruul encampment a few miles south in the heart of the Rubblebelt. But their leader, Nikya of the Old Ways, would not allow Ruzi beyond the entrance. Flanked by a dozen of her warriors, the Gruul leader indicated that they should sit together on the ground, a welcome sign she was willing to listen to what Ruzi had to say.

Nikya was the leader of the Zhur-Taa clan, one of the Gruul tribes who worshiped the ancient gods of old Ravnica. Ruzi could not begin to guess her age. She had the well-muscled physique of a youthful fighter but the battle scars of a veteran. Age-lines branched from the corner of her eyes, which seemed wiser than many of the elder dryads of Vitu-Ghazi. The walls of her encampment were teetering piles of bones, each considered an offering to the gods of the deep earth, who they believed were suffocating under the weight of the city. 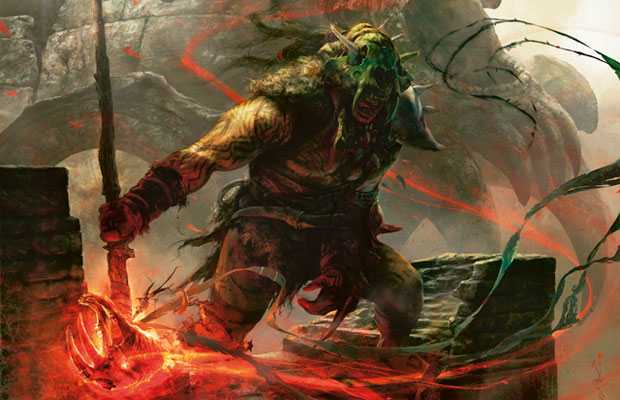 "My sister should not have taken your infant-cousin," Ruzi said. "It was wrong. But she did it out of compassion and innocence."

"Innocence is not an excuse for ignorance," Nikya said. "We do not shield our children from the hardness of life."

"My sister is dead, murdered in her home. Her blood was used to make the Rakdos mark. Let that satisfy your bloodthirst for her grave error."

"Your sister wasn't marked for death," Nikya said. "Blood is for blood. Killing is for killing."

"They killed your infant!" Ruzi said. "They dashed his head against the stones. I buried his body myself."

"Who did this," Nikya asked. "Did you see them with your own eyes?"

"Rakdos," Ruzi said. "All Rakdos are responsible for the crime. But it was carried about by a ringleader who calls herself Massacre Girl. She is a killer of children in exchange for coin."

"My scouts have returned from the compound," Nikya said. "We have seen the bloodwriting on the wall. What you say is true. By my eyes, everyone loyal to the demon is guilty of a bloodcrime against the Gruul. They will be slaughtered in the streets where they live."

After Ruzi left the camp, he walked for miles through the darkness of the wasteland. Without his wolf, he found travelling tediously slow. He felt like a child, tripping over roots in the dark. Ruzi doubled back on himself several times to make sure he wasn't followed by the Gruul. 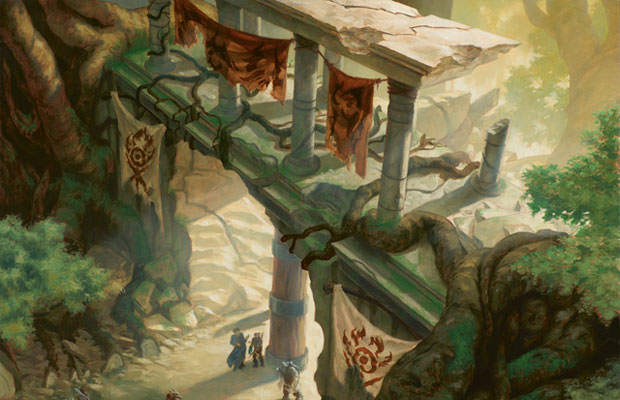 Finally, he reached the city's edge and scaled up the wall of a familiar building. At the top, under a sheltered rooftop, his wolf waited for him. Kuma's paw was curled protectively around the baby Zi, who clutched tightly to Kuma's soft fur. Ruzi took his nephew in his arms and settled against his wolf for the night.

"Tomorrow I'll show you more of this great city," he whispered to Zi. "And then we'll tear it down."

Rakdos against Selesnya. Gruul against Rakdos. Ruzi against them all. 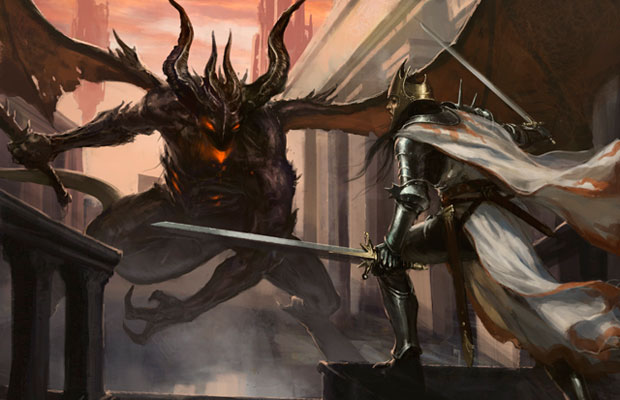