Primed For Seven To Eleven

Tips and strategy for larger groups

multiplayer games can get pretty large.

We've all heard stories of the 20- or 30-player chaos game. A few of us have done them. There probably have been larger games than that. (I wouldn't expect it would be too much trouble to organize a 50 or even 100-player promotional game at a prerelease or similar-sized event.)

But these "ultra-large" group games tend to be fairly unique events, and/or impractical to do too often. No one wants to wait half an hour for their turn; and "simultaneous turns" are a rules nightmare waiting to happen. If you're in a super-large group and are making it work, congratulations. You don't really need my help, and in fact you ought to write an Internet article or two yourself!

For the rest of us, "large" means between seven and eleven players. (This column deals with five-player chaos games as a matter of course; and the numbers four and six have obvious team possibilities. Twelve players can break up into a wide selection of permutations, and 13+ puts you back into ultra-large territory.) That particular awkward range happens a great deal in our group, and we've mixed in many different solutions to keep things fresh. I'd like to use a brief column to share some of those ideas with you all.

The first determination your group has to make when at least seven people start showing up regularly is, are you all okay with the pace of your chaos games? Depending on collections, deck preferences, and play styles, a seven-player game can be quite short - or it can be interminable. If your games tend to last more than an hour each, you may want to consider a few options:

Consider this week an invitation to propose your own solutions to larger groups. It's a lovely problem to have - but for those that struggle with it, it's a blessing we all want to keep!

My preference would be for readers to use the message boards - sharing the point, here. Email is also fine, as usual - but brevity and focus are the watchwords. I make no guarantees on posting your format in a future article; normally, I take bits and pieces of different formats and stitch them together into lovable monsters. 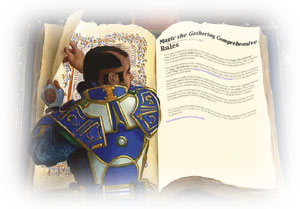 As I close, I want to thank Paul Barclay and the rules team publicly for introducing draft multiplayer rules and consulting with the community. To answer many questions that have come at me since: I knew nothing of this initiative in advance, and I have no influence on the results. Furthermore, I see no need to advocate for one approach or another. My weekly columns in the past have been excellent forums for my own viewpoints on matters such as what to do with dying players' spells and abilities and how far ranges should be in Emperor format and such. So please, carry on without my influence - we'll have a better product at the end if more voices are involved.