Red Elemental Blast from the Past

ather than spend my first article with a long, boring introduction, I thought the best way to introduce myself is to give you an idea of one kind Magic I love to play. Get ready; this game's a doozy!

There were six of us there that night. Six players is just about the worst number there is for multiplayer games. I think seven is the worst, but six is pretty bad. With six players, you end up spending so much time waiting for your turn to happen that the game tends to lose its luster quickly. You can't break into two groups, since three-player games don't tend to be a lot of fun, either, so you are a little stuck.

Many times, we have opted to do three-way Two-Headed Giant games, but the problems you have with three-player games are there when there are only three teams. Sometimes, one team dominates and two other teams just aren't enough to stop it from happening. Sometimes, two teams end up battling, while the third team waits, building its resources until one of the other teams dies, leaving the remaining team spent and easy pickings. 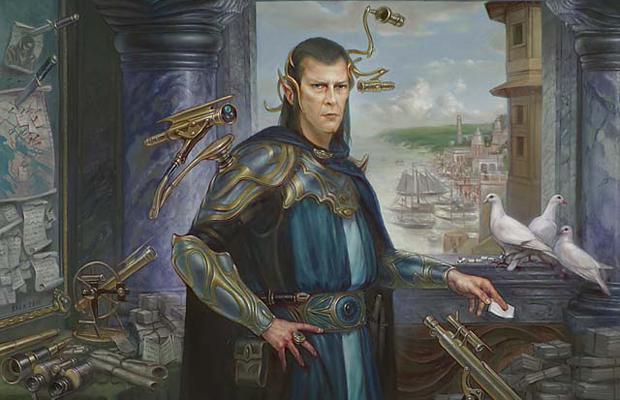 I know many of you are Emperor devotees, screaming how six players is perfect for Emperor. My group has never had a game of Emperor go well. One Emperor inevitably gets the time needed to combo out, or they have a powerhouse attack that just needs time to become impossible to defeat. These games always seem to have an unsatisfying ending, as it becomes apparent early on what is going to happen in the game. This is not to say you shouldn't try it in your group. Your metagame and players may produce epic Emperor games. For me, Emperor has always been a letdown.

That night, we simply shuffled up and rolled the dice, opting for a six-player chaos game without even considering any other option. The players, in turn order, were John, Jesse, Harry, George, Josh, and your truly—the Crazy Canuck. I had decided to run a deck that features Edric, Spymaster of Trest. Without going into too many details, the deck uses a variety of small creatures to slip past opponents' defenses to draw me more cards. When the time is right, I equip some of the creatures and attempt to roundhouse smash my opponents. I figured with this many opponents, not attacking me and getting to draw a card would be appealing to everyone at the table. [cue foreshadowing noises...]

The game started with the obligatory round or two of lands, followed up by the small creatures or other early plays. There was much rejoicing when Josh opted to play a Howling Mine. As everyone enjoyed drawing the extra cards, Josh demonstrated he was in a very giving mood. Over the next several turns, more and more cards were drawn. Eventually, there were two Howling Mines, two Rites of Flourishing, a Heartbeat of Spring, and an Upwelling. For those of you trying to follow along, that meant we were drawing five cards per turn, able to play three lands per turn, getting an extra mana every time we tapped a land, and our mana pools never emptied.

If you haven't figured it out yet, this is NOT a reason to celebrate.

When someone plays a single Howling Mine, he or she is simply trying to draw an extra card and earn some good will with everyone else by letting them draw extra cards as well. When it starts to go beyond that, you need to be alarmed. You need to expect that player is trying to run you out of cards but is betting you won't really do anything about it because you love drawing all those cards. This is a variant of a Group Hug deck. Don't be fooled by what initially appears to be a big ol' bear hug from your good friend, Josh. You just let Josh wrap himself around you like a Boa Constrictor. If you don't realize it early, he'll have you tight and crush the air right out of you. Josh was good enough to let me share his deck with you:


With everyone concerned and excited, Harry took his turn.

Harry is the very definition of a casual player. His decks almost never have four copies of anything in them because he almost never buys individual cards, but he does have a sizeable collection because he has been playing forever. Most of his decks are filled with older cards, or a handful of cards from the most recent set. Harry's work doesn't let him play every Thursday night—in fact, he tends to miss most Thursdays during the school year. When he does come, Harry has an impact.

My playgroup has been talking about land destruction decks for some time. The prevalence of nonbasic lands in everyone's decks has steadily increased over time. For most decks running more than one color, it makes sense to run as many nonbasic lands as possible. It has led all of us to be vulnerable to just this sort of play, but up to that point, no one had actually done it.

Harry made an impact.

Thankfully, Blood Moon wasn't too bad. With everyone drawing handfuls of cards and playing up to three land per turn, finding the basic land and the spell needed to get rid of Blood Moon shouldn't take too long.

Everyone took their turns and no one did anything about the Blood Moon. I found a way to destroy the Blood Moon, but my deck wasn't doing anything else, so I didn't see the point in using the spell until I needed to use it. Either everyone else felt the same way or had no way to get rid of the Blood Moon.

Jesse was the only opponent completely unaffected by Blood Moon. His charge-counter deck was mostly colorless, so he had no problems. He saw the Blood Moon as an opportunity and cast Blightsteel Colossus. With no one able to block due to the Bedlam, the Blightsteel would be a killer just as soon as Jesse could attack with it.

Harry then decided to Threaten the Blightsteel Colossus. I was interested to see who Harry would go after. Would he choose Josh in hopes of stopping everyone from getting all the mana and card drawing? His Blood Moon lockdown would be much more effective without five opponents each drawing five cards per round. Would he choose Jesse? Assuming the Blightsteel Colossus was back in Jesse's possession on his turn, Harry would have to know that he would be a prime target for it. Instead, he rolled a die, and it came up George.

I'm not a fan of randomly choosing an opponent in that way1 and it appeared that Jesse wasn't either. George had no way to stop the Blightsteel Colossus from killing him. Jesse played Blue Sun's Zenith, targeting George, after George said his deck did have a way to deal with the Colossus. In response to the Blue-Sun's Zenith, Harry played Mages' Contest to try and counter the spell. Jesse bid all his life to win the bidding, stopping the counter and letting George draw the cards. With Jesse dead, though, the Colossus disappeared before blockers were declared, and George was saved.

Jesse died so that others might be saved. That's just how he rolls.

George started by casting Omniscience. Harry responded with a Red Elemental Blast! While I was curious to see what George would do with Omniscience on the board, I doubted the game would get past George's turn, so I was pretty happy to see the ten-mana blue spell get countered by a one-mana red spell!

Then George played a second Omniscience! Between the lands in play tapping for the extra mana and the Upwelling, George still had plenty of mana. Okay, so what was he going to play? He had several turns and his hand had at least ten cards, so it should be interesting...

But this turn wasn't over yet! George cast Temporal Mastery and no one could stop it. I was worried about an infinite loop of turns with the Mastery, but most infinite loops in our group are frowned on, so it seemed unlikely.

George's next turn let him draw into his third Omniscience! This time, Harry had no counter to stop it. No one had a counter to stop it. George started what we expected was the end with a free Door to Nothingness. John responded by sacrificing his Seal of Cleansing to destroy the Omniscience. George responded to the Seal by activating Alchemist's Refuge, giving all his cards flash. He then dumped his entire hand on the board before the Omniscience was destroyed.

The highlights from George's hand included:

George used each of his Planeswalkers, but at that point he was stuck. It was clear the rest of us were getting a reprieve. We would only get this one chance to kill off George, so we had best make the most of it.

Josh took his turn and attempted to take out George by decking him out. He played Minds Aglow, offering each of us the chance to pump the card-drawing higher. John and I were both reluctant to add to the total, fearing we would only deck ourselves, so we left it to Josh to try to do it alone. He put fourteen mana into it, then tapped the Otherworld Atlas, forcing George to draw nineteen cards of the eighteen remaining in his library.

I played out an Invisible Stalker and an Empyrial Plate, bemoaning the fact that none of my creatures had the haste needed to take advantage of my hand of over twenty cards!

John had been mostly quiet up to this point (except for the crucial Seal of Cleansing!), but he managed to get several Spirits into play at the end of my turn, then ramped them up with Drogskol Captains and Favorable Winds. His now 5/5 Spirits flew in and took out Josh and Harry.

On my turn, I equipped the Invisible Stalker with the Empyrial Plate and a Loxodon Warhammer, then cast Revenge of the Hunted to make him big enough to kill off John, even though he could destroy the Empyrial Plate with a new Seal of Cleansing.

I wish I could tell you that every game I play is as wild as this one, and ends with a victory for me, but such are the vagaries of casual games. You can be sure to see more of this in the future, along with some deck ideas, casual strategies, old-school cards, bizarre formats, and a variety of other ideas! I look forward to entertaining all of you in the coming weeks and months.

See you next week with a Dragon's Maze preview card!


1: This is a serious pet peeve for me. So much so that a footnote is not the place to explain it. Expect to see this in a future article. (return)