t was Wednesday, September 26, 2012. It was warm weather for mid-September Connecticut, an amalgam of Maryland summer humidity with the scent of crisp New England fall. The trees were dappled orange, red, brown, and yellow, each in more shades than I could ever list. It reminded me of childhood in wooded Pennsylvania, complete with the same chorus of crickets and toads that sang through the night.

I shook Bill's hand firmly, although not for the first time that day: My arrival at the airport, my gratitude over dinner, and my agreement of the New York City sports scene all warranted one beforehand. This last time was different. The grip wasn't as firm, and the movement wasn't as short. Our faces were lit with grins of joy. We weren't meeting as professionals or business agents, but as friends.

We had gaming on our minds.

Maryland is my everyday location, but Washington DC is my city of name. Glamour and the grime of politics are its calling cards, even as more than five-and-a-half million residents call it home. Working in a metropolis has challenges, but the hub of travel ensures visitors are frequent. Last year's meet up with Bill was such an event.

Sharing Magic is tricky: Rules, memorization, and discovery make the process slow. Patience and care are required. When it's your friend, these attributes are easy, and Bill is a very good friend. While Bill was at my wedding and we spent years discussing professional hockey, the visits have been one-sided: always he to DC and never the other way around.

The coach-class ride to Hartford was overdue.

Teaching Bill Magic was also a one-sided affair. I had the cards, knowledge, and experience to share it. He had only the desire to take it all in. With preconstructed decks we had a blast, and Bill narrowly missed a window to defeat me.

This week was our second session, a grudge match battle of wits to see just how far the student had come. He was once the learner but, now, was he the master? 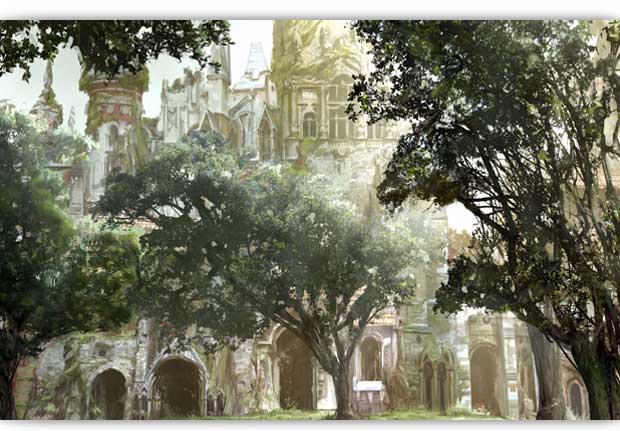 I was armed with Magic 2012 when I demonstrated Magic to Bill. With decks ready, walking through the logistics of the game was the only goal. Winning was an afterthought, although Bill enjoyed being so close to that.

When he returned home, Bill shared his passion with others and continued to play. The rules were no longer the main concern. Understanding strategies, like emptying out someone's library or playing more creatures than an opponent, became his focus. He learned to draft from a few locals. He built his own decks and iterated them against friends.

Knowing where he stood, I didn't bring anything preconstructed. My decks and the time I'd spent on them would have put Bill on disadvantaged ground, and off-the-shelf options would stifle his personality. I wanted him to show off his practiced skills and have an honest shot to take me out, and there's only one format that makes both of these things possible: Sealed. 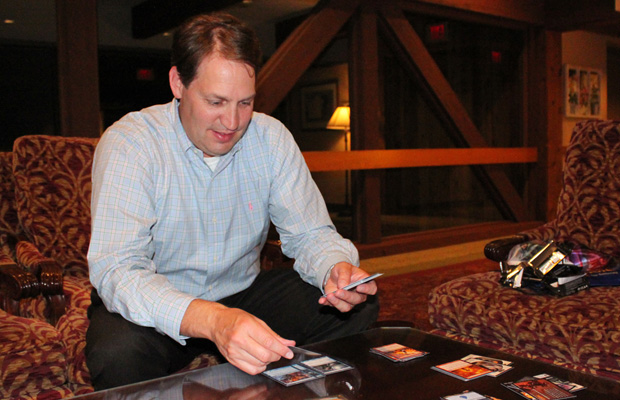 Since Return to Ravnica is still around the corner, Magic 2013 was our choice instead. I've heard—and have nothing but—praise for it as a way to play Limited. With six packs each, Bill and I rigged our contraptions independently, ending up with very different decks.


You're not misreading my list. While white and black were light on creatures, my pool had among the best removal suites I had ever opened. I was confident that creatures wouldn't kill me quickly, and I had Cower in Fear available in my sideboard for token shenanigans.


Bill's deck reflects what he was thinking: Emptying out my library and keeping me at bay with big guys. Having a mix of cheap spells and large creatures was a solid way to make that happen.

With our decks ready, Bill put on a grin and went first. 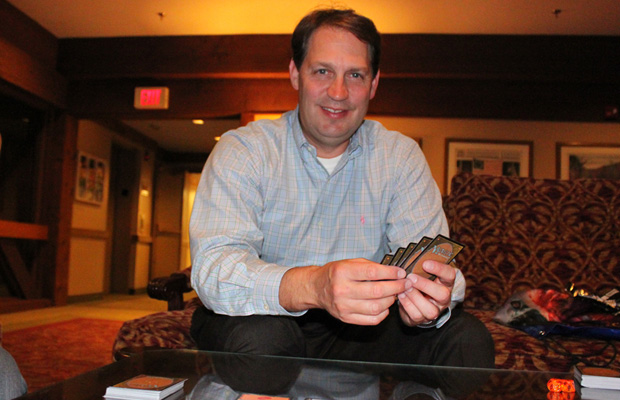 Bill had back-to-back lands over the first two turns, while I managed a Duty-Bound Dead and lands after a mulligan. Bill's third turn is where things took off. 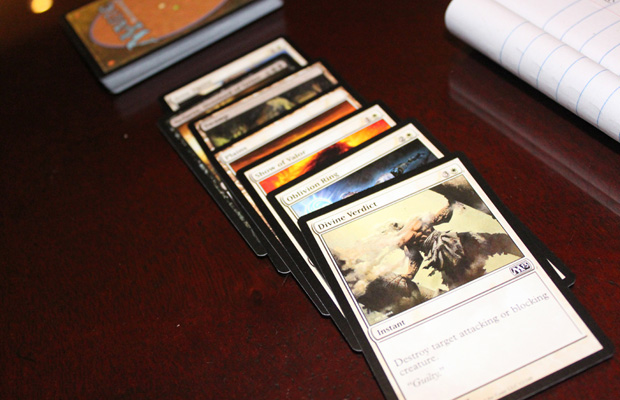 Bill had taken the idea of different decks to heart and was attacking me in a way I both didn't expect and was extremely vulnerable to. Seven cards is pretty salty for a sixty-card deck, but outright brutal when starting with forty.

I fired back with Crusader of Odric, but my draw was another land. As Bill was warming up with milling me out, my deck was being a bit uncooperative. Killing Bill quick would be essential to preventing my failure-to-draw-a-card demise.

Bill, however, is a lucky guy.

Bill's next turn yielded an Augur of Bolas that didn't find anything. I drew yet another land and took out the Augur of Bolas when he blocked my Crusader of Odric attack. (Thanks, exalted!)

But Bill still had the goods anyway. Another Mind Sculpt came down as he used a Downpour to tap my guys on the following turn. 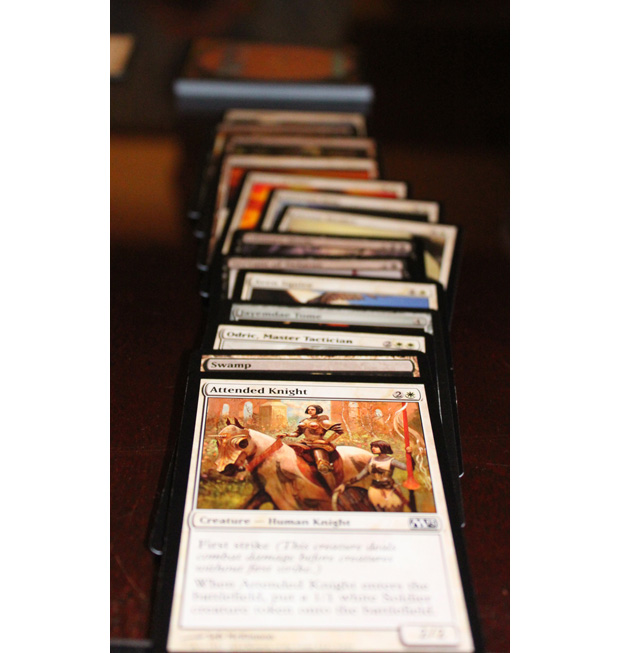 Naturally, my progression of cards brought me a Pacifism, but using it on Archaeomancer felt strange. Bill cast the creature to return and Mind Sculpt me again. 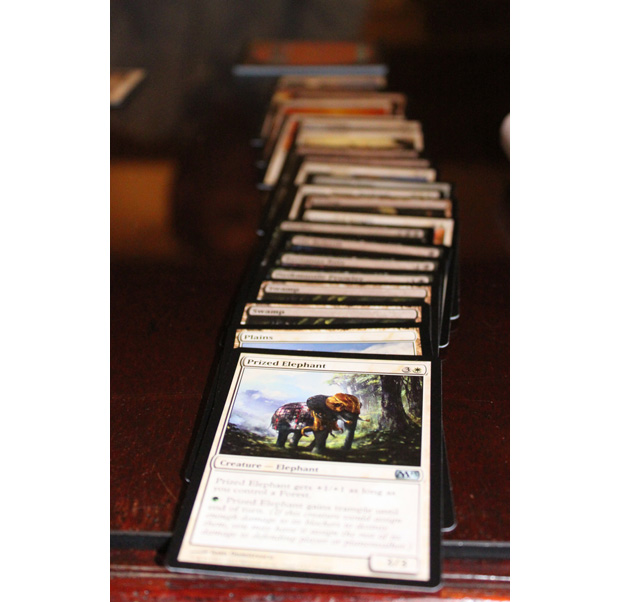 I was down to just seven cards in my library as I valiantly attacked for 3 damage a turn, taking him from 15 to 9 as my clock ticked down. Bill continued to dig by playing Wild Guess (pitching Smelt) and found an Arms Dealer.

Fortunately, he was tapped too far to use the Dealer right away and I had the chance to use a fresh Oblivion Ring to head off the removal. And as quickly as the tables had turned on me, Bill started to hit lands himself. With four cards left, I drew Disentomb and put the three passes of Mind Sculpt to work for me. My abundant mana let me pull back and cast Nefarox, Overlord of Grixis. 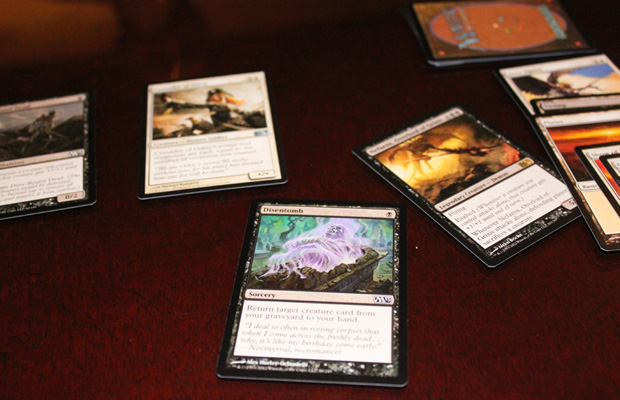 Without any help from his formerly stellar draws, Bill fell as my two remaining cards taunted him.

"That was intense!" was all Bill could say. He wasn't upset or frustrated. How close he came to winning was far closer than he thought possible. With that standby grin on his face, Bill had one question: "Want to play again?"

I had started shuffling before he could even ask.

I explained to Bill that the loser of the first game in a match—a best-of-three-games series—got to choose to play first or draw for the second game. Without any hesitation Bill said he would go first. Bill, above all, learns quick.

Our second game started like the first: pairs of lands for each of us. Duty-Bound Dead was my addition as Bill played Torch Fiend, followed by Augur of Bolas, which found Craterize. I had a third land of my own, and a Crusader of Odric to match, but the fourth land wasn't already in my hand. I knew that Bill's Craterize would set me back at least two turns from casting creatures of four mana, and I was a little worried he might bet on just that.

I was holding two.

Instead, Bill moved ahead, playing a Volcanic Strength on Torch Fiend, outmatching my Crusader on defense and potentially trading on an attack. It was a strong and safe play, but sometimes fortune favors the gambler.

I ripped the needed forth land for my draw and played Prized Elephant. Now I could attack with a 4/4 Crusader of Odric (Thanks again, exalted!), and block the Elephant away for his Torch Fiend. Bill's Augur chumped my Crusader, and the Elephant died to Torch Fiend, all according to my plan.

Bill followed up with a dangerous Scroll Thief. He seemed surprised that I was vocal about it, but I explained that drawing extra cards was already a good thing, and felt even better when your deck was smaller.

But I continued pressing. I attacked with my Crusader, now just a 3/3 after exalted. Bill decided against blocking, and I had one card to punish him: Vile Rebirth. Exiling his dead Torch Fiend and adding a 2/2 Zombie to the battlefield let me hit him for 4 life while leaving behind another blocker for Scroll Thief.

My Disentomb for Prized Elephant put Bill on alert that his clock was ticking fast.

Canyon Minotaur joined his team, putting another body in my way. My Crusader of Odric was going to be a 5/5 thanks to Prized Elephant, but I drew a Plains for the turn: My second Plains. The other four-drop in my hand was Odric, Master Tactician. He joined the battlefield to help move his namesake Crusader up to a 5/5 on the attack, taking out the Scroll Thief.

Bill's Goblin Battle Jester just wasn't what he wanted to see as I untapped with an active Odric. Combat was unpleasant for Bill.

With the clean wipe of his army, Bill could only extend his hand when he drew a Mountain and used Craterize on my Plains just a little too late.

It was late when Bill and I finished so we didn't have time to debrief everything, but he did share a main concept that he wanted me to put up to you: "How can I play strong enough to counter an experienced deck-builder's hand?"

Here's what else he shared about building and playing his deck:

What he means is that despite leveling the playing field where possible, he still felt disadvantaged and behind. Bill and I will talk about what he wants to do, and how he can go about doing that, but your experiences might be helpful for him, too. How do you battle when you feel outmatched? What do you do to keep things fun even as you slide down the slope of defeat?

With everyone coming off of the Return to Ravnica Prereleases this past weekend, and looking forward to the launch parties coming up Friday, how you learn new cards and react to unfamiliar situations can be just what helps Bill most.

You can share your stories via email, Twitter (I'm @the_stybs!), or even the forums. What matters most is honestly sharing. There aren't right and wrong answers, but ideas for what Bill might want to try next. I think we can all help Bill make our destined third battle one for the records.

Join us next week when we aren't building a likeminded community. See you then!