've played in two Prereleases and heard stories from lots of other people, and a few themes have emerged. The most consistent of these: cascade is super fun. Several people told me at the Prerelease that they were playing cascade cards even though they weren't sure if they were any good—cascading was just too much fun not to do. (As it turns out, many of them are also very good.)

I've already seen a lot of the cascade cards in action, and I've heard about even more stories. The fun of cascade is that you don't know what you're going to get, and that means some pulls are better than others. To give you an idea of some of the "big dreams" of cascade, here are the best pulls I've seen or heard about. 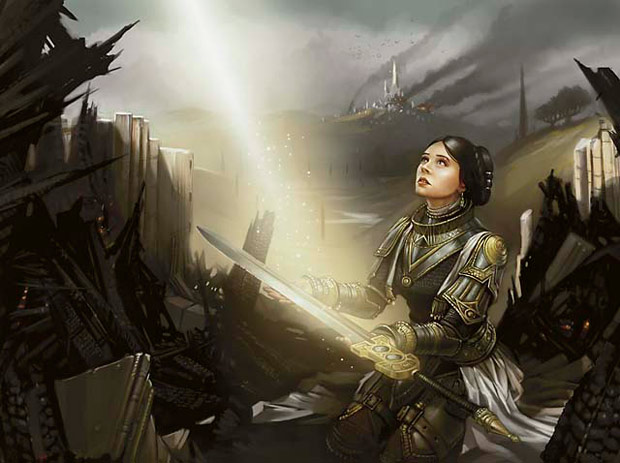 Best cascade: Ethercaste Knight. Imagine playing a two-cost creature—an Esper Stormblade, say, or maybe a Sigiled Paladin—on turn two, then dropping Ardent Plea on turn three, only to cascade into even more exalted so you can swing for something like 5. I've done it, and it feels good. 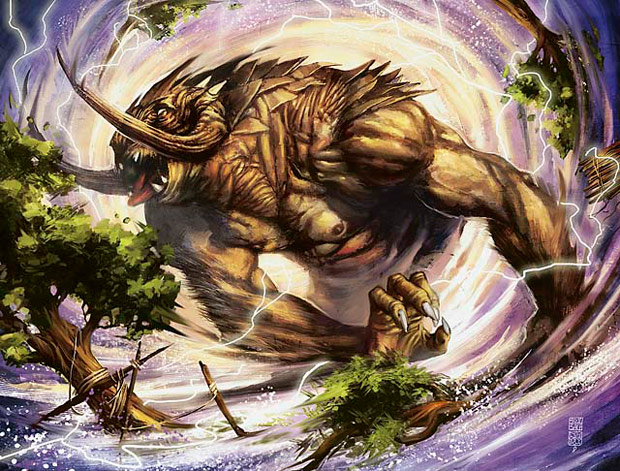 Best cascade: Tower Gargoyle. With two Deny Reality in my Esper deck from the employee Prerelease and three in my Esper deck from the external Prerelease, I saw this card in action a lot. I bounced a Nemesis of Reason twice with Memory Erosion in play, pulling creatures to put pressure on both times and milling the would-be miller in the meantime. I pulled the booby prize of a Borderpost or Obelisk a few times. I hit Kathari Remnant at least once and kept cascading.

But the best was Tower Gargoyle. My opponent had gotten an early start and was keeping the pressure on with aggressive creatures. When I got to five mana, I dropped Deny Reality, thinking mainly of giving myself a reprieve. The top card of my library turned out to be Tower Gargoyle, which hit play with a resounding thud. The pressure was off, the next attack looked grim for my opponent, and the race had swung in my favor. 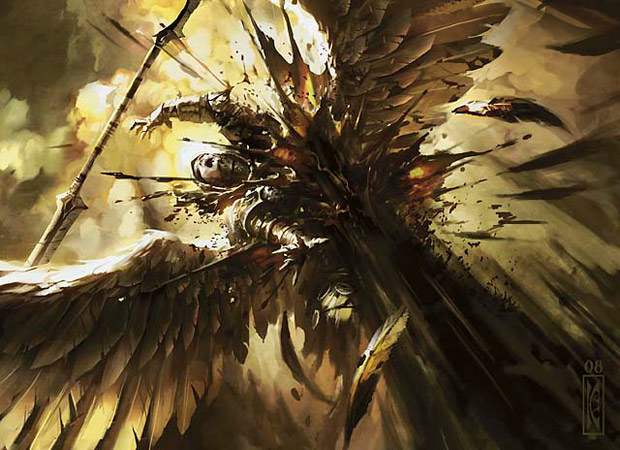 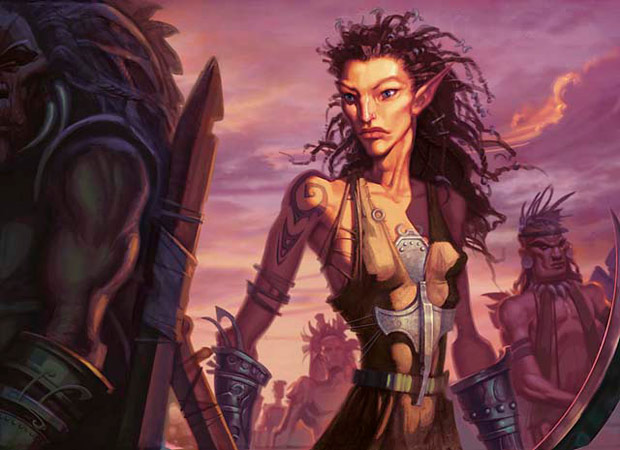 Best cascade: Violent Outburst into Crystallization. Steve Warner did this to me at the employee Prerelease, as I mentioned last week. 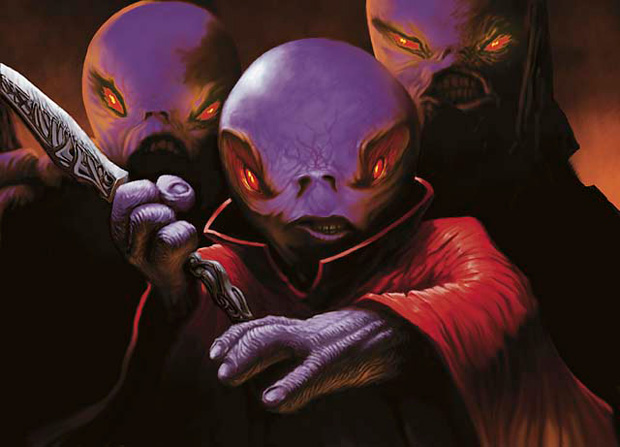 Best cascade: Jund Hackblade. Okay, quick timing lesson. Cascade triggers when you play the spell, not when it resolves. That means that whatever you cascade into will happen while the cascade spell is still on the stack. Sometimes this is a little sad, like when Bloodbraid Elf cascades into Colossal Might and you don't have any other creatures you can (or wish to) target with it. The Elf isn't in play yet, so you'll probably choose not to play the pump spell.

Other times, though, this is a happy occasion—as when Violent Outburst cascades into an "active" Jund Hackblade (or another two-drop haste creature such as Rip-Clan Crasher or Cerodon Yearling), as happened to me at the Prerelease. I had two creatures in play and nothing better to do, so I decided to get my Steward of Valeron and Jund Sojourners (nice mana, huh?) swinging as a 3/2 and 4/2 respectively. When my Violent Outburst cascaded into Jund Hackblade, the hasty little fellow hit play first, so he got to swing as a 4/2 as well. 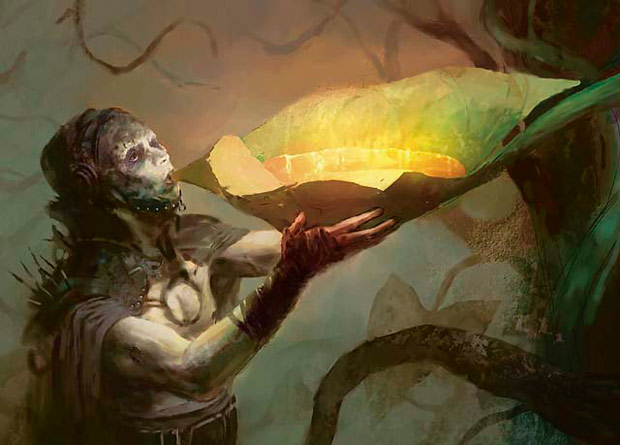 Best cascade: Behemoth Sledge. I'm a fan of life gain, so I've quickly come to enjoy playing Captured Sunlight and spinning the wheel. Whether I pull a creature, a removal spell, or even just an Obelisk, I'm usually pretty happy.

Behemoth Sledge, though? That's setting up a life lead that'll be hard to come back from. This was also done to me last week, also by Steve Warner. 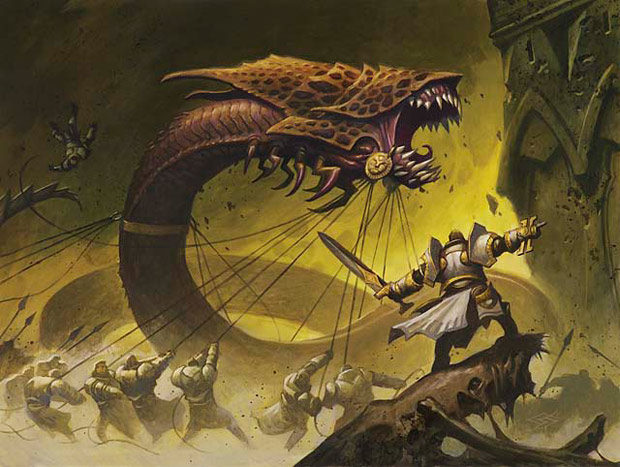 Best cascade: Lord of Extinction. I don't remember who did it—it certainly wasn't me—but at the Prerelease I snapped a photo of an Enlisted Wurm that had cascaded into Lord of Extinction—and there were more than a few cards in the graveyard. Have a big/huge with your 5/5, won't you? 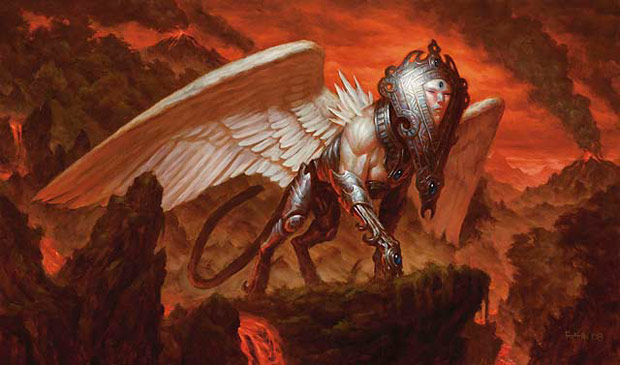 Best cascade: Bituminous Blast into Bloodbraid Elf into Woolly Thoctar. Seriously! This one comes courtesy of Jonmkl in the forums, who was winning handily with a five-color deck when the opponent slammed out that absurd cascade chain. That would be why Jonmkl's deck went 5-0 instead of 4-1, and it's the best cascade chain I've heard about yet. Can anybody top it? Head to the forums and shout it out! 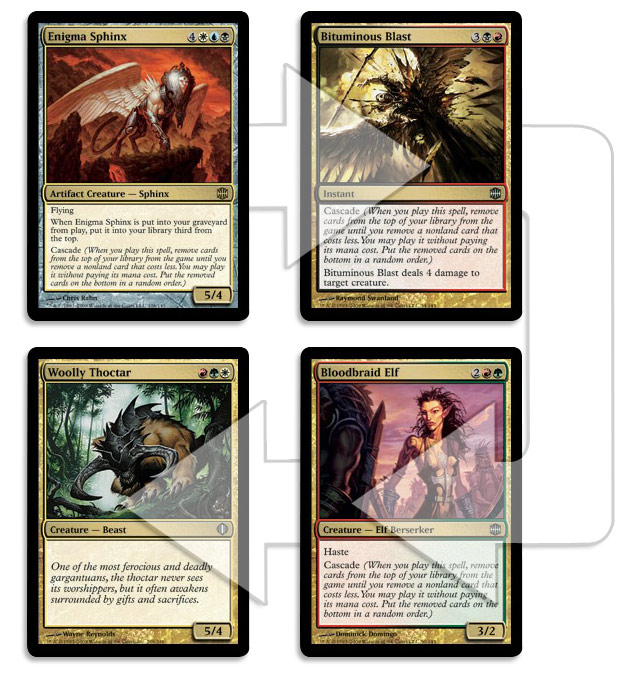 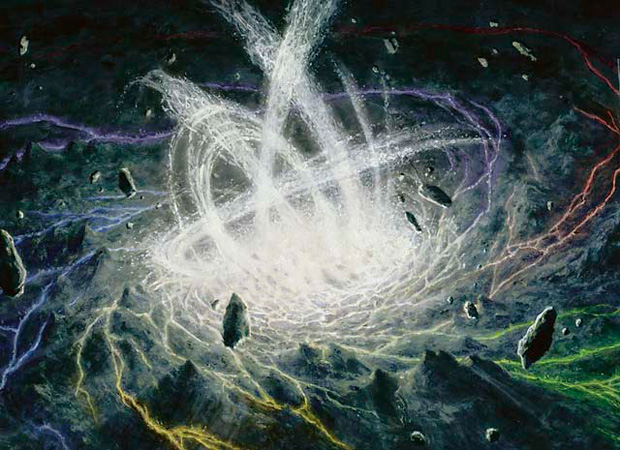 and crash in with a token copy of Flameblast Dragon a turn before the main event.

In Sealed Deck, spells with cascade almost invariably end up in decks that aren't especially designed to take advantage of them. That's why sometimes you get a "booby prize," like cascading Bloodbraid Elf into Lavalanche (meaning you can't pay mana for

, meaning you'll probably pass on playing it). Does that mean I should have left either Bloodbraid Elf or Lavalanche on the sidelines? No way! They're two great tastes—they just don't taste good together. These things happen.

When you're building your deck at home, though, you have a lot more options when it comes to cascade. I can certainly imagine a dedicated adrenaline gamer (see my Timmy Manifesto for more about the types of Timmy) making sure there was a single bad pull in there to keep things exciting—a Squire, say, or even something like One With Nothing—and maybe even vowing to play it if it came up .... That's pretty funny, actually.

When building a deck with cascade cards, most of us will try to make sure there's plenty of juicy stuff to flip up. Sure, occasionally you're going to want Bloodbraid Elf in a deck with Firespout (even though Firespout doesn't do anything if you didn't pay mana for it) or Banefire (same problem as Lavalanche). If they're both cards you want to play, hey, worst-case scenario with cascade is that you get nothing extra.

But you can get tricky, too. You can make sure every spell you can cascade into is one you want to play. You can even make sure they're all one sort of spell—all creatures, say, or all kill spells, or even something more specialized like all mana accelerators or all bounce spells. That's easier to do with the low-cost cascade spells, but there's a funny way to cheat with the high-cost cascade spells: low-cost cascade spells! If your threes and fours are all Violent Outburst, Ardent Plea, Bloodbraid Elf, and Captured Sunlight, then Bituminous Blast and Deny Reality will consistently send you down to your ones and twos.

That's basically what my friend Dave did in the cascade-based deck he brought to the Seattle Prerelease for Standard gunslinging.

The other "cascade deck" banging around in my head leaves the adrenaline rush behind for the Johnny thrill of always knowing what you'll cascade up. Picture a deck that fills its graveyard up with cycling creatures and evoke Elementals, then plays any cascade spell—it doesn't matter, although you'll probably want it to cost less rather than more—with only one spell that actually costs less than it:

Living End! So you stock your graveyard with Glassdust Hulks and Igneous Pouncers and Mulldrifters and Aethersnipes, then you play, let's say, Deny Reality. Even though you've been cycling for as little as one mana and evoking for as little as three, your creatures all technically cost a lot. Deny Reality's cascade zooms right by them and hits Living End—whose converted mana cost is zero—which you then play.

My favorite part about this is that the first time you bust it out, nobody will have any idea what you're doing. Your deck will just look like one that isn't working at all—cycling things, gathering lands, drawing cards, and just generally doing nothing in particular. When your cascade spell finally hits—preferably when nobody has counter mana for the Living End—you get to see the looks on everybody's faces when they realize that they're going to lose all their precious creatures, and you're going to spit all of yours into play.

The other Time Spiral suspend spells with no cost work the same way, and I'm sure someone can think of a good use for being able to guarantee a Restore Balance or a Wheel of Fate whenever they want it and with no advance warning. 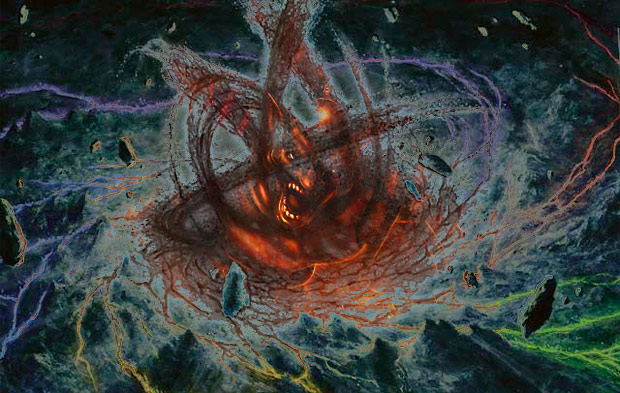 Let's talk a little more about Maelstrom Nexus. The other cascade cards tie you down in one way or another—you already know that the "front end" of the spell is 4 life, or 4 damage, or a 3/2 with haste, or whatever. But Maelstrom Nexus blows it wide open. Once you've laid down that hefty

initial investment, you get to pick what cascades. Is it a two-drop, to make sure you get that Path to Exile? Is it a ten-drop, to really spin the wheel? Up to you!

There are a lot of directions to go with Maelstrom Nexus. I haven't gotten my hands on one yet, but I have lots of ideas saved up for when I do. Spells you don't have to pay full cost for are pretty exciting—the aforementioned evokers, say, or one of the double pitch spells from Coldsnap (e.g., Allosaurus Rider). Blazing Shoal and the other Shoals from Betrayers are especially exciting, as

spells you can jack up without spending any mana—the downside being the decidedly unexciting prospect of cascading up Blazing Shoal number two. 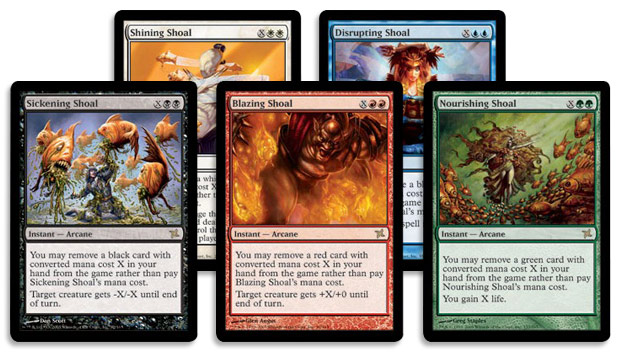 If you have two Maelstrom Nexuses, or if the spell you're playing already had cascade, you get to cascade both times. That sounds to me like a recipe for craziness.

And for some reason, I can't shake the desire to run out Maelstrom Nexus and Fist of Suns so I can play Gleemax and cascade for literally a million. There's no practical reason to do so, really, although I guess you could cascade into Draco or Time Stretch or something. I mean, why not, right?

Ultimately, I'm less concerned with the strategic implications of cascade than with the fact that it is really, really fun to do. It's spinning the wheel, pulling from the deck, entrusting yourself to fate—but you almost always get something. Even if it's Squire.

Has cascade gotten your gears turning? Any more great stories from Prereleases or Launch Parties? Any neat deck ideas? Head to the forums or shoot me an email and let me know!