Return of the Flyin' Lion

few articles ago, I built an alpha version of a deck featuring Krond the Dawn-Clad. The deck was created because I like the card and wanted to try to feature him. I mean, a flying lion who wears sunshine?! I included a variety of cards, most of them somehow related to Auras, then mashed them together to see which cards were exciting and which just weren't going to make the cut. 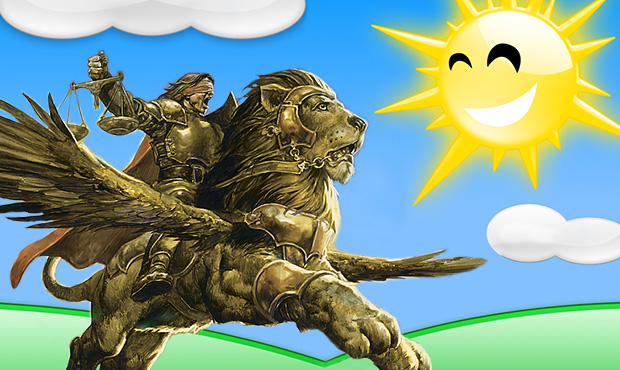 I'll save you the trouble of linking back to the original article and list the deck below:


At the end of the article, I asked for your thoughts on the deck. The plethora of emails and comments in the forum were great. Between your comments and my experiences with the deck after a few games, I have made some significant improvements to the deck.

After just a few games, a couple of problems were very obvious. The first was that the deck was simply too slow. Most multiplayer games let you dance dangerously with your mana. With multiple opponents, a slow start is something that you can get away with in many games. This deck, though, was just too slow. The mana base offered very limited ramping, and I was rarely able to play Krond on turn six. His triple-white, triple-green cost was just too much, even for my deck loaded with nonbasics that could produce either color. When the feature card in your deck rarely gets on the battlefield before turn eight, you know you are going to have problems.

The second problem was closely related to the first. Since Krond was often a non-factor, I was forced to use other cards in ways they weren't meant to be used in the deck. Wrapping Faith Healer in three Auras is cute and makes for some interesting in-game discussions, but it really wasn't what I was going for.

Gatecreeper Vine and the Selesnya Guildgates. The Guildgates are simply subpar lands if you don't have a way to take advantage of the Gate subtype. The Gatecreeper Vine just didn't do enough to justify the Guildgates. Getting a Guildgate in my hand wasn't enough upside when compared to dealing with lands that enter the battlefield tapped.

Almost everyone who wrote in recognized that mana was likely going to be an issue. A couple of players suggested Chromatic Lantern as a solution. Others wanted more Rampant Growth, Harrow, and other green ramp spells. While I like the idea of the Chromatic Lantern, since it would allow me to splash cards from any color, I decided that I didn't want to be that dependent on a card for some of my spells when I'm already leaning on Krond.

I opted for a solution many others recommended: Selesnya Signet. While artifacts are more likely to be destroyed than lands in most games, I have found that these low cost artifacts don't tend to draw the hate the way a Sol Ring or Wurmcoil Engine does. The Signets were easy to include.

Other popular suggestions were Somberwald Sage and Birds of Paradise. Many players saw the Sage as an easy way to fulfill at least half of Krond's color requirements early in the game, then as a chump blocker once Krond was already in play. Birds of Paradise have the two-fold purpose of pumping your mana base and providing an evasion creature that can carry Auras in a pinch.

I left both Temple Garden and Wooded Bastion at three copies each because I didn't own a fourth copy of either. You really want these at four. I know 2 damage can be painful when you start at only 20 life, and an opening hand that includes only Wooded Bastions is an issue, but these cards are just too good to go without. 1

Brian wrote in with several suggestions, including Ghostly Prison and Sigil of the Empty Throne. Considering the problems I was having with the early game, Ghostly Prison seems like an excellent solution. The Prison is an effective deterrent in the early game and shuts down opponents relying on overwhelming you with 1/1 tokens.

Sigil of the Empty Throne is a different bird entirely. The Sigil really demands a deck of its own. Cards like Flickering Ward and enchantments with flash are some of the cards that make the Sigil really shine. Those cards don't really work in this deck. I've seen a couple of powerful Sigil of the Empty Throne decks, but this deck doesn't make the card pop.

In spite of that, I'm going to run it anyway. Brian was not the only person who recommended the Sigil. More people supported the Sigil than any other card. With so many people encouraging me to include it, I would be remiss to not even give it a shot! Even if I only get an Angel every couple of turns, the extra 4/4 flying Angels can certainly go a long way. If it doesn't work out, I can take it out. If it does, I'll happily up the numbers and look at ways to make it even better.

Many of you who wrote in are fans of totem armor. Some of you questioned my intellect and parentage in relation to the lack of totem armor and/or Umbra Mystic in the deck. Others were less kind. Others were simply, "Dude, no Umbras?"

Umbras were left out due to the numbers game. Between cards I wanted to try and cards I knew I wanted in the deck, Umbras were left behind. The new version will rectify that issue. Since there was more room for Auras than there was for more creatures, I chose to include Felidar Umbra over Umbra Mystic. The ability to move Felidar Umbra to any creature I control lets me protect all of them, and on the rare occasion when it is desired, allows me to let a creature die.

Ancestral Mask and Ethereal Armor were two other recommendations and I like them both. They are both relatively inexpensive and can make the creature they are enchanting into a one-hit kill. Unfortunately, I have limited space for extra Auras and I can't see dropping Rancor, Umbras, or a Spirit Mantle for these cards. I could see one of them replacing the Armadillo Cloak, but trample on Krond is a little more valuable than making the 6/6 creature even bigger.

Some of the less-suggested cards were very interesting. Gannontrueman suggested Aspect of Mongoose. This was an old favorite and I've squeezed him in. A little shroud that comes back to your hand seems great in this deck. Gannontrueman, among others, also suggested Return to Ravnica's Sphere of Safety. At five mana, I think it is a little pricey and doesn't offer the early defense that a Ghostly Prison offers. In spite of that, I'm going to add it in. While it may not help early on, I expect it will almost completely shut opponents out as the game progresses.

PureLiquidAwesome recommended Dueling Grounds. I can definitely see this card in a future version of the deck that includes Ancestral Mask and Ethereal Armor and doesn't include Sigil of the Empty Throne. I really like this option. Look for this in a future version if things don't work out for Krond deck in its current direction.

If I was going to add in the recommended cards, I was going to need to remove many others. Evershrike, Faith Healer, and Kitsune Mystic were the first creatures to be dropped. Evershrike was five mana and demanded the Auras be put on it. That was proving difficult, considering Krond wants at least one Aura as well, and as you'll see, the Aura count has come down. Faith Healer was in there as a way to gain life by repeatedly sacrificing Rancor. With Felidar Umbra in the deck, Faith Healer became redundant. Kitsune Mystic was another card that just took too long to develop and wasn't as helpful with Felidar Umbra in there already moving to whichever creature needed it.

Dryad Militant and Aura Gnarlid were more difficult to cut but were the next to go. The Kor Spiritdancers were already doing the job the Aura Gnarlid was doing, and it was giving me free card drawing as well. The Dryad Militant had done good work in the games that I had played, but it was as a 2/1 for one; its effect wasn't doing much since it was invariably used as a chump blocker.

Elfhame Sanctuary, Rampant Growth, and Verdant Haven all came out. With the Signets, Somberwald Sages, and Birds of Paradise, ramping should not be an issue.

Exoskeletal Armor came out as well. While I loved the big boost to the enchanted creature, it doesn't offer trample or protection from creatures, both of which get through opponents' creatures. If Ancestral Mask and Ethereal Armor aren't making the cut, Exoskeletal Armor won't either.

Shield of the Oversoul and Holy Mantle were victims as well. Shield doesn't do enough for creatures that are only green or white. Being indestructible is nice, but you can still be blocked, and I wanted something a little more. I may change my tune after playing a few games, but for now, the Shield can take a seat on the bench. Holy Mantle is a victim of Spirit Mantle. The minor power and toughness boost isn't enough to justify the higher cost. Even if I had the space to keep it, I would cut it in favor of another Spirit Mantle.

The new version of Krond looks like this. Here is Clothes in a Bag:


So there you have the beta edition of Krond! I'll get a few games in with the new and improved version and I look forward to your emails and comments in the forums!

1: I will rarely include the original dual lands in my decklists. So few players have access to Savannah and the other original duals that including them in the list is just a disservice to almost all of my readers. If you have copies of the duals, add them in. By not including them I'm not panning the cards, I'm just trying to give the reader some realistic options. (return)