The Riddle of the Sphinx

o let's say you're opening a booster pack of Shards of Alara. Maybe it's at the Prerelease a few weeks from now, or a Launch Party the week after that, or sometime later when you get the chance.

You're not playing Pack Wars this time, like I did a few weeks ago. No, this is one of your first packs of the new set, so you crack it open and savor every card. One by one, you read the commons, then the uncommons. (I can't tell you anything about those yet, but a few of my colleagues will be doing exactly that later this week.) 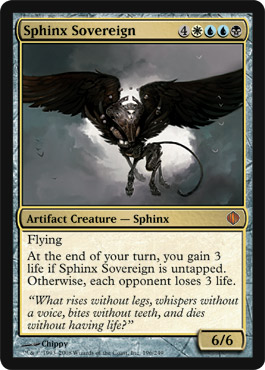 What's the first thing you notice about this card?

, a mana cost unique in Magic's 15-year history. The fact that it's three colors is far from unique, though certainly unusual. The thing that sets it apart from most other three-colored cards is the imbalance, the fact that you need more blue mana to play Sphinx Sovereign than you do white or black. What's up with that funky cost? 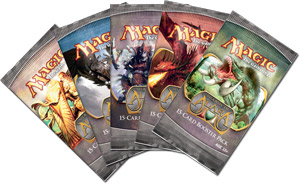 The answer lies in the structure of Shards of Alara and the worlds in which it's set. The plane of Alara is—as you might already know—no longer one world, but five; long ago, the plane was refracted into five different planes called shards. Each shard has three colors of mana: one "center" color along with its two allies. The other two colors—the center color's enemies—are completely unknown.

Sphinx Sovereign's mana cost represents the mix of mana in Esper: white, blue, and black, with more blue than either of the other two. Esper is a world where those three colors of mana have been woven together to create a rigid, tightly controlled society where magic is power, knowledge is status, and artifice is a way of life.

In game terms, the division into shards means that Shards of Alara takes three-color play to a whole new level. There are more three-colored cards in Shards of Alara than in any other Magic set, along with plenty of two-colored creatures and off-color activations. And remember, the shards are worlds, not factions; every single card in the set is tied to one of the five shards (with the sort-of exception of the set's four planeswalkers, who are at least aware of the other shards' existence).

Naturally, that doesn't stop you from putting a blue card from Esper in your mono-blue deck, or your green-blue deck, or even your blue-black-red deck that embodies the separate shard-plane of Grixis. But you'll also find that each of the shards has a mechanical identity that makes cards from that shard, across all three of its colors, play nicely together.

What's Esper's theme? Let me direct your attention to....

You probably weren't expecting to see a frame like Reaper King's again anytime soon. But here's Sphinx Sovereign, in all its multicolored, artifacty glory. The card frame contains elements of the colored card frame and the artifact card frame, to help you remember that the card is, well, both colored and an artifact.

You'll see similar frames on all of the colored artifacts, all of which are from Esper. In fact, every Esper creature is an artifact creature, and giving bonuses to your artifacts is Esper's mechanical theme.

Besides the frame, you can tell Sphinx Sovereign is white, blue, and black from its mana cost, and you can tell it's an artifact from its type line. Still, the frame is the most prominent visual cue, and it's probably what you'll scan the table for when using one of the many Esper cards that care about artifacts.

It also looks fantastic, at least in my opinion, and some of the one- and two-colored artifacts look even better.

Colored artifacts really are their colors and really are artifacts. Sphinx Sovereign is white, blue, and black. It's an artifact and a creature. Protect it with Darksteel Forge or Slobad, Goblin Tinkerer. Enchant it with Steel of the Godhead, Helm of the Ghastlord, or Edge of the Divinity (or all three!).

Transguild Courier, Reaper King, and Sarcomite Myr, make room in the dugout. The rest of the team just entered the stadium.

You may have noticed that Sphinx Sovereign's expansion symbol isn't black. It isn't silver. It isn't gold. It isn't even purple.

That, my friends, is the color of a mythic rare.

This might not be the first mythic rare you've seen, if you read Doug Beyer's feature article or the Arcana about the Shards of Alara Prerelease card, Ajani Vengeant.

Honestly, I was a little skeptical when I first heard about the concept of mythic rares. I wasn't sure they'd feel special enough.

That was before I saw somebody open one.

See, I get to hang around Magic R&D sometimes. And in Magic R&D, sometimes booster packs of an upcoming set are available well before the set's release date. And on very rare occasions, I get to be one of the people who participates in the inevitable booster draft that follows.

This wasn't one of those happy times. In fact, I had no inkling there were new cards in the building. I'd made lunch plans with a co-worker who was, quite uncharacteristically, late coming over to my desk. A little after noon, I headed over toward his desk on the far side of the R&D Pit, figuring that he'd probably been drawn into some heated debate about who would win a fight between Yoda and Batman, or whatever. (Yoda, obviously.)

On my way over, I happened to glance into one of the meeting rooms, where a draft had just started. R&D is usually an uninhabited wasteland by 12:05—they take lunch seriously over there—so I had a hunch something was up. Sure enough, the booster packaging everyone had just ripped open had the Shards of Alara logo on it, and there, at the far end of the table, was my prodigal lunch date, looking like I'd just caught him with his hand in the cookie jar—but that wasn't going to stop him from having a cookie.

He explained that he’d simply been in the right place at the right time.

I conceded that this was a perfectly legitimate reason for missing lunch. This was, after all, the first ever Shards of Alara draft. Who would pass that up?

Meanwhile, all of the other drafters were thumbing through their packs one by one, ogling the new cards, and one of them said, "Oooh!"

Those of us who were watching rather than drafting all leaned over to see what he was excited about... and he held it up. The card from the back of his pack.

There was only one thing we could say: "Oooh!"

It was exciting. It was special.

And honestly, I can't wait to open one.

The Stats and Abilities

Of course, Sphinx Sovereign isn't just a three-colored mythic rare artifact creature from the shard of Esper. It isn't even the only card that fits that description! It's got an ability that I can't wait to see in action at a multiplayer table, never mind that it's a perfectly respectable 6/6 flyer.

Sometimes in multiplayer, you're in wait-and-see mode. Maybe there's nobody you can usefully attack. Maybe you don't want to make any enemies. Maybe you're low on life and needing to keep back enough blockers to ward off major threats.

In situations like that, Sphinx Sovereign is a huge flying blocker that will make even most Dragons look elsewhere for softer morsels. And it's not just that—it also provides a respectable life boost at the end of each of your turns when you keep it back to block, including the turn you play it. The longer you spend holding everyone off with this enormous blocker, the more life you gain.

Other times, of course, you want to take the offensive. Maybe you've got enough blockers or a big enough life pad that you can afford to go on an air raid. Maybe it's time to finish somebody off. Or maybe you're just bored.

In times like that, Sphinx Sovereign will happily send its 6 points of power winging over the heads of ground-bound blockers. And that's where the other side of its "at end of turn" ability comes in. It's got those two magic words—"each player"—that can make just about any effect worth a second look for multiplayer. When Sphinx Sovereign takes the fight to one opponent and lives to tell about it, it wears down all of your opponents. Three life a turn, in either direction, can really add up.

There are all kinds of ways to get sneaky if you want to attack and still gain life, or not attack but make others lose life.. If you want to attack with Sphinx Sovereign but still gain life, consider giving it vigilance with something like Triclopean Sight, or untapping it with a card like Puppeteer or Umbral Mantle. If you don't want to attack any particular player but do want all your opponents to lose life, you could give Sphinx Sovereign a tap ability with cards such as Sinstriker's Will or Psionic Gift, or tap it to use an ability of another card, such as Opposition or Lodestone Myr.

Although it might not seem so little to whoever just took 9.

Esper is ruled by a mageocracy, a government by magic-users, that holds those with the greatest knowledge of arcane lore in the highest esteem. It's no surprise, then, that many important and powerful Esper mages consult regularly with the sphinxes, sphinxes on any plane being masters of secrets, mysteries, and above all riddles.

Fittingly, Sphinx Sovereign is a card that asks a lot of questions... and your buddies around the table had better hope they've got answers.