, you just know you're on the right side of a fight.

You can still be on the righteous side. 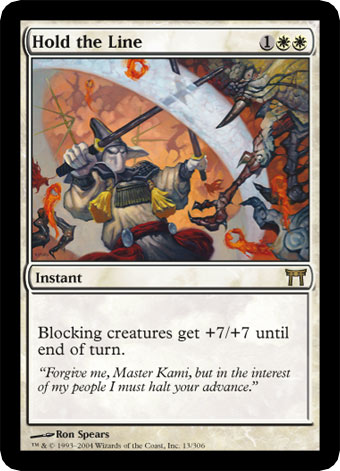 Veterans of the game will recognize this card as Righteousness run wild.

My first impression on seeing Champions of Kamigawa's Hold the Line was, this is going to be terrific in Emperor draft. What our group has learned from a few months' experimentation with this new format is that emperors are often looking for good, solid, versatile cards that lieutenants can't easily use. While a lieutenant could theoretically use this card, a given pack will almost certainly contain something tastier – an actual creature, for example – and this should make it a few picks to an emperor who looks good in white.

My second impression in seeing the card was, all those magicthegathering.com readers who don't play Emperor draft would need to see something else from me. Very well, my picky little friends. But don't expect me to stray far from my usual multiplayer slant!

Hold the Line is what I call a "spider" card in group play – it allows your deck to set a trap so you can gain card advantage. One of the more ideal scenarios would go something like this:

You have a soldier deck. You play Mobilization on the third turn and start turning out a token per turn for a few turns. (Of course, you're waiting until the end of your last opponent's turn before using the mana, right?) You're not doing much else, but eventually one aggressive player decides she's left you alone for long enough and comes your way on her seventh turn…with a Clickslither, a Raging Goblin, a Skizzik (long ago played and kicked), and a Blistering Firecat she just morphed.

You have three soldier tokens, for which you have paid one card (and quite a bit of tempo). If you block the big boys, you'll take up to 14 damage. That's not fatal, but not many people recover from that, either.

But maybe – just maybe – your soldiers will "hold the line." Which, in this context, means "take the line, pull it tight, run really fast holding it from either end, and clothesline the oncoming forces at brilliant speed."

By the time the dust settles, you will have one instant card in your graveyard and three healthy tokens. Your opponent, however, will have three creatures in the graveyard (possibly four, if she foolishly sacked the goblin to the Clickslither). This is good if she's working toward an Avatar of Woe; otherwise, she probably feels like a train wreck.

That's what a spider card does.

Spiders tend to be instants, so players can trap with them two different ways. They can either play aggressively, dare someone to try to approach them, and then punish the offender with an unexpected additional answer; or they can help you feign weakness, attract a vulture, and smack the feathers right off that carrion-feeding punk. Either way, you get a nice warm feeling in your tummy.

When to Hold, When to Fold

The drawback to a card like Hold the Line, like Righteousness before it, is that it requires a fairly specific action on the part of your opponent to work. (This may reduce its value in competitive, tournament play.) Not only does your opponent have to attack with a couple of creatures you'd want to kill – you have to have a fairly poor (read: inviting) board position to attract the right sort of attack. But of course, you can't have a completely lousy, blocker-free board position. So you have to set it up juuust sooo…

In addition to that, you have to be fairly certain your opponent isn't holding a quick removal spell to get rid of a blocker or two in response to your clever spell. (Alternately, you could be okay trading your blocker and Hold the Line for one of his removal spells.)

If you get all of these stars aligned, you will be satisfied with the results.

So do you wait for the perfect moment, keeping Hold the Line in your hand, letting a single Hill Giant smack you for 3 damage every turn while your Eager Cadet scowls with impatience? Probably not, for two reasons.

First, smart players won't apply more pressure than they absolutely have to. If the Hill Giant's getting the job done, that's all you can expect to see until you deal with it. If you wait with Hold the Line, you'll never get to play it – or you'll play it with a disgusted look on your face for the same trade you could have had back when you were at 20 life instead of 4.

Second, sometimes a spider card is best when it's not a spider. Put another way, if someone sees you play Hold the Line early, who's going to send their best army crashing into your blockers when you have

showing? Here, Hold the Line acts less like a spider in your hand, and more like a rattlesnake in your graveyard.

So don't be afraid to play this card early. Let everyone else worry about whether you still have one late.

Enough analysis and strategy. How about some deck ideas?

My first idea was to try to get all of my friends to play Electryte, which Hold the Line is really spectacular against. But then I figured that plan might be a bit thin. Then an idea started brewing with No Quarter, but I realized the new wording on the card made my trick moot.

So are we out of ideas? Cripes, haven't you learned anything from this card yet? The situation may look difficult (though to believe so, you'd have to think Electryte is a lot better than it actually is), but there's plenty of directions you can take this card!

We'll start with a strategy white excels at: life gain. I'd start with a bunch of token generators (say, Kjeldoran Outpost and Mobilization), and then work in some or all of the following cards, closing with the eventually massive Serra Avatar:

While counterintuitive, I kinda of prefer a more creative approach to Hold the Line. You're essentially using it to beef up a smaller number of blockers – and the cool part is, they can block okay even if you don't have the instant in your hand. Note this strategy means you should also include Righteousness, since it's just as good (and cheaper) in situations where you have only one blocker.

Who says you have to play Hold the Line during a combat where you're attacking or blocking? Just wait for a situation when you want to see an attack against another opponent fail miserably, and let 'er rip. If you're following this path, you might as well throw in a few other goodies as well:

If you have enough mana, you can generate a pretty frightening army out of thin air. Consider the following:

While I haven't set this up as a "kill" combo yet, there's some pretty serious synergy going on with the next short list. I'm sure most of you can figure out a way to win when you draw 24 cards off of three blocking 7/11 Wall of Blossoms in mid-combat (don't forget the three you drew when you played them at instant speed), and leave a bunch of bear tokens in their wake:

Aluren
Greater Good
Wall of Blossoms
Caller of the Claw

Perhaps the most certain way to make sure Hold the Line will be useful to you is to combine it with a "power sacrifice." I've added Fervent Charge because the colors happen to work, and because it gives your forces an offensive boost to balance the defensive boost Hold the Line offers.

Personally, I think my favorite trick in a deck like that would be to wait until Opponent A is attacking Opponent B, let B block, play Hold the Line while smiling at B, let combat damage resolve destroying all of A's attackers, and then play Backlash on B's untapped blocker while smiling at A.

The lesson? Your side is always the righteous side!

Anthony Alongi is too darn righteous to provide deck help.