Not necessarily the best way to use this new card

, we have a long journey ahead of us, so let's go right to the card: 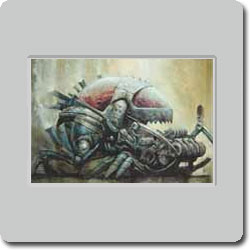 Whoops, wrong slide. Getting ahead of myself, here. I say again: let's go right to the card: 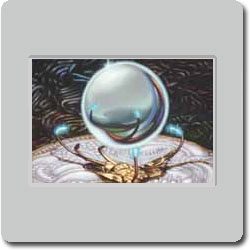 Hmmm. Wrong again. Scott, you're the editor, help me out here. Check the projector; I could have sworn I had these in order…all right, Scott, give 'er another whirl… 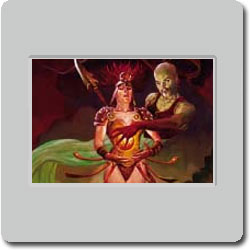 Well, we're getting close now. I did this preview card back in the days just before Judgment. Ah, those were the good ol' days. Hey, Scott, you guys at Wizards sure do give me cool stuff to preview. And that reminds me – I probably should have said a word or two about Burning Wish during sorcery week about a month ago, eh? Well, you see, the gorillas wouldn't let me, and…oh, all right, we'll get back to this week's preview.

What, you say you actually want to see the card? Oh.

See, here's the problem. Scott Johns, our site editor, broke the slide projector, and it's not really available just right now. (If you don't know what a slide projector is, you're too darn young for me. Go look it up.) We've got to take it off line, and then Dan's gotta beta test it, and…well, anyway, if you folks will indulge me for a little while, I'll start with the end of the deck construction, work my way backwards, and with luck the card will be available by the end (or beginning), and it will all make sense.

(Seriously, don't scroll down and ruin it. It will be way more rewarding this way. Trust me.)

So anyway, as you can imagine, Millikins are critical to this deck. Without it, you're just not going to get the fuel you need quickly enough. Fortunately, they're also Extended-legal, which means four copies of Burning Wish are still okay.

Readers may reasonably question whether the Scroll Racks really help. The chances you'll pull this off are fairly remote anyway – especially since cards that might help you with a killing blow, such as Sculpting Steel, won't work since their abilities trigger as they come into play, not when – and obviously, you won't have artifacts worth copying in play yet! (I mean, duh.) But you need the Racks – not just to get to stuff like Solitary Confinement faster; but also to stay alive if your critical turn doesn't work.

The Solemn Simulacrums are there as light blockers and, as with any combo deck, to help keep you alive. The Lightning Greaves can actually put them on the offensive early, if you have the opportunity. And they're super-duper with the Power Matrix and/or Fireshrieker! (Just make sure you power them up before you put the Greaves on! But of course, you already knew that from studying the core of the deck.) Good times.

Duplicants are there to supplement your main path to victory – they're excellent creature removal for your critical turn.

With all of these things, plus the Levelers, in your graveyard from the Mesmeric Orb, your killer turn is sure to be an eye-opener.

(What? You didn't think I put those cards at the beginning of the article for no reason, did you?!?)

So let's recap: you survive by using your wits for about ten turns. Mesmeric Orb, Solitary Confinement, and Millikin are all throwing cards into your graveyard. At some point, all four Levelers and all four Lightning Greaves will be in there or in play, and everyone will be within striking distance. That's when you, er, strike, my friend. (Seriously, what are you waiting for? It's not going to get any better.) You play Burning Wish, get your “I win” card, and play it (go ahead and tap out, because more mana's a-comin'!). Unless anything's been removed from the game, you should have at least four Levelers, a mix of your other artifact creatures including Millikins, quite a few artifact lands, and your Lightning Greaves come into play. Your Duplicants take care of the one or two troublesome artifact creatures that opponents brought in. You either tap lands or equip Millikins with Lightning Greaves to get whatever other mana you need – e.g., to equip a Leveler with Fireshrieker – and then fit those four pairs of soft shoes on the waiting feet of your Leveler quartet.

Well, for 40-50 damage, anyway. That ought to be enough to win a small multiplayer game, and it's certainly enough to win a duel. Not every incredibly intricate combo has to go off for 1,429 damage, am I right?

1 Roar of Reclamation 1 What, you think you need something else?

4 Ancient Den 4 Great Furnace 8 Mountain 8 Plains 4 Leveler 1 What, you think you need something else?

Now, I know what you're thinking: “Anthony, you made us wait an entire article for this deck?” Well, honestly, no. I'm sure you could do better with the card, Smarty-Pants. But I have four Levelers, four Mesmeric Orbs, and four Burning Wishes gathering dust in my collection; I've never used them; and this seemed like as good a chance as any. I'm building the damn deck. The rest of you are on your own.

The symmetry of this card will be challenging for many of you. It will grow in power as Mirrodin block fades into the past. You'll be facing more and more new players (or returning veterans) who don't have their decks full of stuff like Darksteel Colossus. So hang onto these when you find them, whether tournament players find a use for them or not. This sorcery is a casual keeper!

If you're still waiting to see the card, go back to the decklist and pay attention. Scott got that slide projector working some time ago. 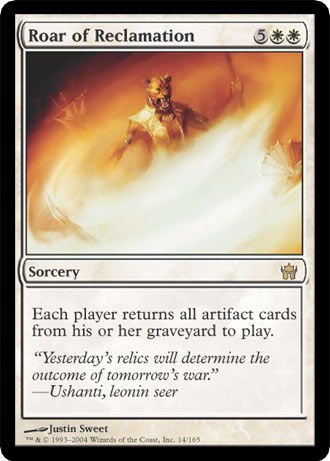