Dwarf Week, some readers might expect this column to go in-depth into the dwarf creature type and its prospects in a format such as tribal wars. But a quick look at Gatherer will really tell you all you need to know there. (Search for just "dwar" to get both singular and plural forms. Technically, this also lets in Mindwarper, who may or may not have dwarven relatives; but I'm sure most of you can handle the literary anomaly.) Dwarves could use a good tune-up as a creature type, and there are not too many different kinds of decks you can build if you've modeled your Magic career after Thorin Oakenshield.

While we wait for Wizards to correct this oversight – and not having read whatever Mark wrote yesterday, I can only imagine they will someday – here is a great way to celebrate dwarfdom in your Magic group: short deck formats.

There are at least three advantages to peppering your format menu with an occasional short deck format:

1) Faster games. In most cases, fewer cards will lead to shorter games. Sometimes the mill condition will set in faster, and sometimes it's just a matter of no concentrated control deck dominating these kinds of formats. Either way, you can be pretty sure each game will last closer to fifteen minutes, than two hours.

2) Less predictability. This is counterintuitive to those who study probability and statistics – shouldn't smaller decks be more predictable than larger decks? Aren't huge, impractical decks the ones that play different every time? Very true for constructed formats; but most short deck formats change the entire card pool every game – typically by using new or added booster packs. For most of these formats, you can go game after game without being completely aware of what's really in your own deck.

3) Easier handling. Which would you rather carry – a 250-card monstrosity or a lean 25-card deck? I thought so.

Because short decks are easier to handle, they lend themselves to casual round-robin duel "tournaments" where winners take the loser's deck and add it to their own for the next match. You'll see a few examples of formats below where this works.

This brings up an important point. Using prize structures where winners get the losers' cards may cause some folks to interpret this format as gambling. Please adhere to any appropriate local laws, religious requirements, and parental wishes. It's perfectly possible to play these formats, have all original owners keep their cards and other possessions all night long, and still enjoy yourselves. Do what is right for you and your group.

Not every format is about being tall, dark, and handsome! Let's take a look at three different options for stouter decks. 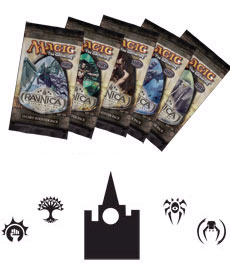 Dwarf format #1: Pack Wars. I should have mentioned this format several weeks ago when I discussed how to get more enjoyment out of new booster packs. I compensated partially with a brief glimpse in last week's Cosmic Larva Quiz, but this is a neat enough format to get more full mention.

While there are lots of local variations on Pack Wars, here's a basic description that can get you started. You and any number of friends you want start off with one booster pack. Each of you opens and shuffles your pack without looking at what you have. Draw no opening hand.

The pack, of course, is your library. Each player draws one card off the library each turn. You may assume that every player has an infinite number of each type of basic land. If you draw a land card, you may cycle it for 0 at any time you could play an instant.

Other than that, normal rules of Magic apply. Once a game is over, you can bust open a new set of packs and start a whole new game!

There are certainly some bombs in the format – X spells like Fireball simply win the game. You can ban them if you like (especially if you're playing with older sets, where X spells are more often in common slots); but keep in mind that part of the fun of this format is the speed. If you ban certain cards and you find yourself going over 20 minutes per game, you may want to reconsider.

Most players who play this format use the following prize structure: a player who wins a pack war wins all cards from all packs used in the game. You can modify this in multiplayer to: all rares go to the winner, all uncommons go to second place.

Each player takes a booster pack, opens it, and shuffles in two or three of each basic land – again, without looking at the pack's contents. This is your library. No opening hand.

With a 30-card deck and no opening hands, milling is a less threatening strategy than in Pack Wars, so I think it's safe to let people lose if they can't draw a card. If your group finds that too many people lose this way, you can always implement the "auto-library" replenishment rule that Pack Wars uses. (Again, there are many variations possible.)

Decks in this format take longer to develop, since you have to rely on the basic lands (and perhaps 1-2 non-basic lands) in your deck. With no starting hand, you can expect the first few turns to be very slow. If they're too slow for your group's taste, consider starting hands of three, four, or five.

As with Pack Wars, prize structure can range from nothing ("everyone keeps their pack") to everything ("winner take all"). Mark Rosewater recently reminded me that many groups play round-robin duels, where the winner adds the loser's cards to their deck.

Winner takes all decks. Sideboards stay with the players who opened them. Repeat as many times as you like.

I recommend this format for those who are willing to potentially part with packs, but want to limit the extent of painful losses (and therefore, be warned, large gains). If you open a foil Birds of Paradise, you can opt not to put it in the deck – which means it won't be there to help your deck win, but it also matters less to you if you lose.

Cards that cost more than six mana will almost certainly go into your sideboard, which reduces the number of ridiculous bombs this format can generate.

Those who are more risk-averse will enjoy this format a bit more than the risk-seeking among you – that's how it's designed.

I hope you enjoy these short formats during your long Thanksgiving weekend! Even if you're not celebrating the holiday this week, eat well and stand tall.

Anthony has been playing multiple Magic formats for several years, and has been writing for much longer than that. His young adult fantasy novel JENNIFER SCALES AND THE ANCIENT FURNACE, co-written with wife MaryJanice Davidson and published by Berkley Books, is available now.