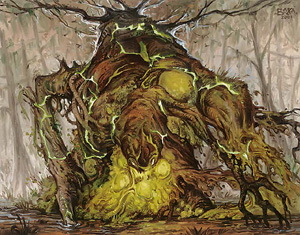 know how I knew Wizards was giving me a good card to preview? The card had a one-word name. And it was a real word, too, not something made-up like "Torchling" or "Pyroclasm." Nor was it a real-but-vaguely-obscure word that would be left out in abridged dictionaries, like "Evangelize."

No, the word that Wizards chose for me was an everyday word we've all used:

There aren't that many words left, you know. Magic has over 9000 unique cards and counting, and most of the good one-word cards were rudely gulped up by the early designers as they tacked a lot of very solid names onto pretty lousy cards. If they'd known that Magic would be around and thriving 14 years later, I'm sure the designers would have said, "Wait a minute—Invisibility's a pretty rockin' name. It's a spell that everyone wants to have. Should we blow this whole namespace on a card this lame?"

I imagine the Names and Flavor Text team at Wizards sits around glumly looking in Roget's College Thesaurus, going, "We can't have used all the synonyms for fire on Magic cards, can we? Dangit, we have a new burn spell, and we can't just call it 'Crispy Critter'!"

Hence, every new name that gets put on a card has to be evaluated to see whether it's worthy. And Dread? Dread's the kind of word that you're surprised isn't on a Magic card already—you know it's a black card without even looking at the art. Dread's also a classic word, filled with plenty of Edgar Allen Poe and H.P. Lovecraft associations.


So you know they thought about it before making a card worthy of such an evocative name. But can the mechanics live up to such a potent word? Oh yes. This card will create all three definitions at your very multiplayer table.

To understand why this card is awesome in chaos multiplayer, let's discuss a couple of things. First off, there's the thing that Timmy will not fail to miss: It's a 6/6 creature with fear. This means that if your opponents have no black or artifact creatures to block, they will be taking 6 to the dome when you decide to put a little Dread into 'em.

But—sorry, Timmy—"large and unblockable" does not an awesome creature make by itself. (Size isn't everything, guys.) If it was just a 6/6 with fear, that would be an okay creature, but its size and unblockability would make it not as fun as you'd think. "A 6/6 I can't block?" Mister Red-and-Green would say. "I'd better kill this guy, quick!" And so you'd have to keep your Dread at home on defense to guard against a team-up from other players.

Inspiring terror in your multiplayer group is all fine and well. But you want more than terror; you want victory. You want to send that Dread out and make it work for you.

Thankfully, it's the No Mercy ability here that gives Dread its spice. Last week, I talked about who you should attack in a chaos multiplayer game, and I said this:

"Before you start sending your boys out to attack, double-check to see that you don't need them back home. You don't need enough to hold off everyone's armies—you just need enough guys back home that it would cost them to attack you, even if someone fires a removal spell or two at you at the end of your turn."

Dread is not only a 6/6 that's most likely unblockable by many of your opponents, but it sends a warning message: Sure, you can attack me back. But you can only do it once.

Note that Dread's ability does not target. It's just an effect that's triggered whenever you're dealt damage to. This means that "protection from black" will not save your opponent's creatures from an ugly demise. We're all sick and tired of Akroma, Angel of Wrath coming over to smack face, but Dread ensures that Akroma hits the bin in short order.

In a duel, Dread's not gonna save your bacon. Your opponent will shrug and go, "Well, what else am I going to do with these creatures? I mise well Fling 'em at your face." But in multiplayer, your opponents might take you off the board by sacrificing all of their guys to the mighty Dread... But then they'll be helpless when they face their remaining opponents. They may, in fact, have to reluctantly just suck it up and take the 6 to their face because they can't afford to lose their guys.

They'll hate that. In fact, they might even—what's the word?—"anticipate it with alarm, distaste, or reluctance."

Gosh. There's some word that describes that phenomenon, but I'll be hanged if I can remember what it is.

But wait! It gets better. You see, the reason Pernicious Deed is one of the best multiplayer cards is that it's a Rattlesnake, and Rattlesnakes work particularly well against inexperienced players. It tells them, "Go elsewhere. Attack me and it will cost you."

Now, newbies hate to lose the cards that they've invested precious mana in, so they're loath to attack in the first place. Pernicious Deed tells them, "If you attack me, I'll make sure you lose everything." So novice players facing a Deed attack other people, weakening them and leaving you free.

Dread will do the same thing. It'll send timid players running for the hills. It will—how might I put this?—have fledging newbies holding you "in awe or reverence" as you gently work them over.

Dread is obviously based on No Mercy, a good card that I tried to break seven ways to Sunday. But it never worked as well as I wanted because it was, in the end, an enchantment. It could provide some Rattlesnake warnings, but it couldn't serve for 6. It was an entirely passive card.

No Mercy is a card that's served extremely well by putting it on a body. And that body is impressive enough to be worth the cost—you get a 6/6 fear dude for a measly two mana more.

Is Dread all upside? Of course not. The fact is that you have to be hurt in order for Dread's ability to trigger; you can't activate that Story Circle and prevent the damage, nosirree. You have to get bloodied, which can be a real pain sometimes.

Plus, if someone caps your Dread before damage resolves, well, things get ugly. That's not likely, given that it's a 6/6 and immune to Terror effects, but blue can still do the bouncy-bouncy thing.

But you can get around those limitations fairly easily. I'm imagining the skeleton of a deck involving some of white's lifegain to offset any potential life-loss from the attacks, some of black's delicious creature-kill to clear the way for your attack (sadly, black's usual graveyard recursion doesn't work quite as well on Dread here), a four-pack of Dreads, a little white protection to stop your Dreads from flying away when you most need them...

...And a four-pack of Equal Treatment.

"Equal Treatment. I survive, they all die."

"Hoses you. Oh, on my turn, I'll cast Beacon of Immortality."

Dread's a pretty simple card that lends itself to reasonably simple strategies... But that's just the way I like 'em. Get it out there and knock 'em down.

Inspire some Dread in your multiplayer group.