The Sky's the Limit

, there are 208 emails in my inbox telling me how to best utilize the raw power of Nacatl War-Pride for multiplayer. You guys really went all-out; some of these emails could be articles in themselves, five-page diatribes explaining why this approach provides the perfect stratagem for the Pride.

Your enthusiasm is a wonderful thing... But it's taking me longer than I thought it would to get through everything you've written! Which is why, sadly, the contest results will not be today, but in two weeks. 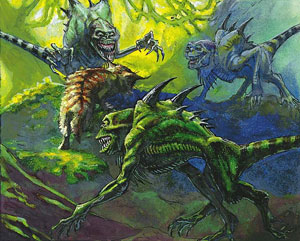 This past Wednesday, we gathered at the Compendium in Rocky River, Ohio, to play some multiplayer. But there was a twist: Ben had a boatload of Magic boxes, including enough Time Spiral Block to go around. So instead of breaking out our normal decks, we had a set of five-player drafts and then played Chaos Multiplayer with the decks we'd created.

It was, not surprisingly, a lot of fun.

People have been telling me for awhile that I should write on Limited multiplayer—there aren't a lot of people cracking packs at their kitchen table, but the ones who do are some of the most enthusiastic people in Magic. They write to me weekly, telling me that I should do more group drafts and/or Sealed play.

I have to agree with them. The issue with a lot of multiplayer games is the disparity in card pools—I've been playing since The Dark, so I have a ton of dual lands and old power cards, but some of the other players only have cards from Guildpact onwards. It's hard for them to beat a deck that packs a full set of Treachery, a very beat-up Library of Alexandria, and Reins of Power.

But Limited evens the playing field. Everyone has the same card pool; it's more down to your skill than your collection, which is a good thing.

"But Ferrett," you say. "That's not true! The experienced drafters will be way ahead of the folks who only play twice a year in the Prerelease tournaments!" And that's what I would have thought, too, but at least for this first time, the novelty of it all made for a crazily level playing field. We had folks who'd barely drafted before and regulars at the Saturday draft, and you'd think that the experienced drafters would be ahead on this one.

But they weren't, because the rules were slightly different.

As Josh said, "I was just sitting here, plucking my cards on autopilot for a solid draft deck, and then I realized five picks in that this is multiplayer. I had to value the cards differently." It may well be that people who've been playing a lot of Two-Headed Giant PTQs are ahead, since they've got a taste of what more players means. But the rest of us suddenly had to envision an environment that was as new to us as it was to the fresh fishies.

In any case, lemme tell you some of the tricks I've learned in drafting for Chaos Multiplayer (and, by luck or by skill, I won the game, so I have at least some scant authority to stand upon here).

It's not really that different, so don't go nuts...

Generally, if a card is a good card in regular Limited, it's going to be a good card in Multiplayer Limited. The standard rules apply; have enough creatures to mount a defense and offense, get enough removal to make it worthwhile, and mind your mana curve.

There are plenty of good articles on Limited out there; we have Jeff Cunningham's Magic Academy articles, some of which (like this one) are about Limited, and Quentin Martin's Limited Information archive, and StarCityGames.com has a whole section devoted to Time Spiral Limited play. Learn the lessons of basic Limited, and you'll find it's not all that different.

...but some cards are crazily weighted.

One of the things that shocked a few of my friends was how good Essence Warden was in Two-Headed Giant. As a 1/1, it was something nobody ever wanted to waste precious removal on—but if they didn't, you'd gain 10 to 15 life easily off of a one-drop spell.

Likewise, Volcanic Awakening was never a strong card in a duel, but in Two-Headed Giant it wasn't too hard to convince your partner to help you up the storm count—attack into their army, let them burn their tricks, have your partner play some refresher creatures, and then drop the hammer on five of their lands. That'll help.

The things to remember in multiplayer Limited are simple:

Storm spells, on the other hand, are trickier. The reason Volcanic Awakening worked is because you had an ally who would help you to pump the storm count. That may not be the case in a free-for-all multiplayer game, so be careful out there.

There will be creature pileups, so have a defense ready.

Because there is a lot less removal, you're almost guaranteed to see several people amassing three or four creatures at once. If you don't have anything on the spot to be able to ward them off, they'll come at you just because they can. That's bad.

Make sure you can handle the ground and the air.

Since creature standoffs will develop, evasion is very good.

Corpulent Corpse? Some people think it's too slow for draft. But when you have a 3/3 that can break up an otherwise-frozen ground stall, that's not bad at all. It still doesn't make it a first-pick by any means, but evasion comes at a slightly higher price in multiplayer, so value it appropriately.

Not too much. But most draft decks concentrate on aiming around the two-to-four slot; you might want to think about the two-to-five slot, with a couple of high-end bombs peppered at the top end to decimate your opponents.

Paradoxically, low-cost combat tricks are at a premium in multiplayer, because if you're in a dominating position you'll need to defend it—and if that's the case, you don't want to run out of mana. I'm not saying to skip the Stonewood Invocations, but there will be occasions when you drop that six-mana guy who is your key to victory and have only two mana to protect him. Josh almost won the game because he unmorphed his Akroma, Angel of Fury and had a timely Rebuff the Wicked that none of us saw coming.

Careful on the bounce.

Bounce is nice in duels. Your opponent temporarily loses a guy, and assuming you don't kill him, he loses a whole turn to recast it! Except in multiplayer, he loses a turn but everyone else still gets theirs.

If you use bounce, use it to screw with someone who's in the lead or to protect your guys. It's a technique that's not exactly weakened, but you have to use it slightly differently.

As always, massive lifegain is good.

Pure lifegain cards, as always, aren't very good. You don't win by gaining life, you win by killing other players!

But if an Essence Warden buys you 15 life, that's 15 life you can use for other purposes. You can choose to burn off that 15 life by attacking someone and not fearing their inevitable counterattack. You can last an extra two turns against multiple players. You have a buffer.

There's a reason Congregate is good in big multiplayer games. If you can find a way to get life on a stick, or life in addition to some other cool effect, do so.

One Final Word that Is Not on Limited

I myself am not a maven when it comes to alternative formats. Many of you have written to me, asking me if I've heard of any zany Magic variants that might pep up their local multiplayer group... But I'm not the guy who tracks these sorts of things.

My buddy Abe Sargent is.

Every week, he writes about casual topics as well, usually covering some of the wackier formats. He likes building weird decks with weird limitations on what sorts of cards he can use. He's a good writer, and if you like me, you might wanna check him out.

So why am I mentioning him today, you ask? After all, he's been writing since well before I ever started writing here. Well, today's special, because last week he wrote an article on multiplayer that I quite liked called Advanced Multiplayer Strategies, and I think it's well worth your time. Check it out.

(Oh – and if you've written an article on multiplayer somewhere and you think I'd like it, feel free to email me. If I think it's particularly good, I might give it a shout-out.)