So Much For Big Ideas

in between two of my "big idea" articles is a theme week that couldn't focus on a more ironic color combination: red and black.

If you're looking for big ideas this week, you picked the wrong time. Red and black, the color combination of the Rakdos guild, do not come together to "think". They come together to act and to win, at any cost.

When the defining keyword of a color combination encourages you to dump as many cards from your hand as quickly as possible, you're not talking about high strategy. You are, however, talking about some intriguing ideas – particularly when we look at multiplayer environments.

Why is this? At least three reasons.

First, two-color decks usually use the second color to shore up the weaknesses of the first color. But red and black do an awful job of complementing each other. Their strengths are often the same – particularly creature destruction, direct damage, and a willingness to sacrifice now to get good stuff. The major thing red can do that black can't is destroy artifacts; and the major thing black can do that red can't is graveyard recursion. Those skills can be useful; but they're not like, say, green backing up black, or red backing up white. 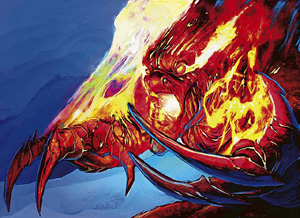 Nine times out of ten, if you're building a red-black deck, you're doing it to include some cool gold cards that happen to use both colors – say, Deepfire Elemental or Terminate. But if you tried really hard, you could probably build a mono-red or mono-black deck that accomplished pretty much the same thing as your two-color deck. And you'd have more consistent mana (and might even be able to lower the land count for more "business" spells).

Second, Red/Black can't target enchantments. This doesn't have to be fatal; but when you consider that every other two-color combination has some reliable way of dealing with all three non-land permanent types on a spot basis…well, that sort of gap gets your attention.

Presumably, Red/Black can make up for not hitting enchantments by being very good at hitting lands. But land destruction is too unpopular in most multiplayer circles; and even where it's acceptable, it's not terribly effective at doing more than shutting down a single player. Unlike most spot removal, spot land destruction doesn't trade a generic removal card for "their best card." Put another way: instead of trading a lowly Terminate for a mighty Adarkar Valkyrie, you're trading a lowly Stone Rain for…an even lowlier Forest. The math can work in a duel for reasons of tempo and mana denial; but most land destruction is just not strategically attractive in multiplayer.

Put it all together, and you have a guild that's in serious trouble when sitting down against two or more opponents. But hey, if you're the reckless type who would play Rakdos, you might want to try it anyway. So what do you do to maximize your chances of success?

The lamest answer is to add artifacts like Nevinyrral's Disk, to give Red/Black some added functionality. While I do this occasionally, it feels dirty. I think I can be more helpful in a Red/Black article than this!

Many group veterans will tell you that no matter what colors you're playing, it's better to focus on control than on aggression. I won't speak to the truth of that broad statement today; but I will suggest that if you're having trouble with traditional Red/Black aggression in multiplayer, you may want to try pushing harder for the long game.

I've created both paper and Online decks built around Lightning Rift. The core goes something like this:

A deck like this is very, very good at keeping creatures off the board. So good, in fact, that many enchantments (say, Glorious Anthem) are moot. My versions of this deck are both creatureless, so I can give my opponents some dead cards. Slip in two or three cards that can provide a victory condition – say, Dragon Roost or Debtor's Knell (which give you creatures without providing a creature card), and you have a decent Plan B backing up the Rifts.

Option Three: Go To The Head, A Lot

In my experience, both with our group and the many players I've opposed in local stores and Online, few players play with redirection effects (Willbender) or heavy protection effects (Ivory Mask). For that reason, the most direct path to victory may be…the aptly-named "direct damage" plan. Here, using both red and black doubles the number of spells at your disposal – Fireball, Consume Spirit, and all of their variants. Even Soul Burn can join in.

You can get to some pretty high X's using combos with Desperate Ritual. Be sure your group can handle the combo before you try it. And have a plan for game two with the deck, when everyone's gunning for you.

Option Four: Play Aggression, But Do It Smarter

Sometimes, an aggressive Red/Black deck can do a better job if its owner prioritizes opponents more carefully. Too often, I've seen aggressive players smack someone around just because "they hit me first" or "there's no blocker there." The math has to be more complex than that. All things being roughly equal, I'd recommend a priority list that follows this basic shape:

Perhaps the two best pre-Dissension Red/Black cards were both dragons: Vampiric Dragon and Bladewing the Risen. Throw in some Buried Alive and Zombify, and you can set off a little bit of a chain: Bladewing, the Vampiric Dragon, and Bladewing's Thrall. Pepper the deck with some of your other favorite dragons, and maybe some Dragonspeaker Shamans, and presto! A chance at some explosive victories.

Like the first option, this one may seem a bit lame. But there is something to be said for admitting Red/Black's shortcomings…and then doing something concrete about it. With all the new dual lands out there (including the decent common "Karoo" lands), it's never been easier to play three colors in a constructed multiplayer deck.

By adding white or green, you open up a world of possibilities for your previously hamstrung red-black creation. You can do something as simple as splash Disenchant; or throw in powerhouses like Darigaaz the Igniter. You can toss your opponents a surprise like Forgotten Ancient, or gain some goodwill at the table with an Oath of Lieges.

One last thought on Red/Black strategies. The most frustrating thing that can happen for a Red/Black is to bring a key opponent (perhaps the last one!) down to less than ten life…and then stall. Perhaps the enemy finds a way to stabilize. Perhaps you simply run out of cards. In such cases, and depending on the stalls you see most often, I would recommend one copy of one or more of the following cards. They can serve as finishers and/or backbreakers so you punch those last bits of damage through.

They are all rare, and deservedly so. I'm not suggesting you pick up four of each. Instead, consider picking up one copy of the two or three that look most appealing to you.

However you finish up the game, revel in your wins. A big part of being a good red-black mage is in perfecting an evil roar. (Just look at the artwork of Rakdos the Defiler, if you don't believe me!) For all of its faults, Red/Black is admirable for its clarity of purpose, and for its directness. If you can take that asset and smash through a win at a multiplayer table, it's a great feeling.

Anthony Alongi has been playing various Magic formats for over eight years, and has been a writer for much longer than that. He co-wrote JENNIFER SCALES AND THE MESSENGER OF LIGHT with his wife MaryJanice Davidson. Jennifer Scales is a dragon; but she's more red-white than red-black.