The Sound You Want to Hear

That's the sound you wanna hear when you're playing a card in multiplayer—the hard, meaty sound of a blow hitting home. What fun is it to drop a card if you're not going to rip someone to shreds?

Well, the next card requires a little setup to absolutely remove an opponent from the game. But that setup isn't too much to ask, particularly in a tribe that we all know so well from Lorwyn—and it makes Boris Devilboon one of the best cards in your deck. 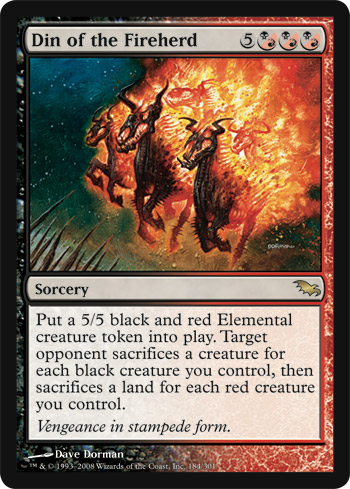 Din of the Fireherd is one of those great cards for multiplayer simply because it fills a gap in a deck style. See, black-red aggro has always struggled in multiplayer, which Wizards of the Coast seems to have realized; Lorwyn gave a lot of punch to the Goblins tribe, providing reusability in the form of Wort, Boggart Auntie, and happy Shock time in the form of Tarfire, and a whole chain of reusable Goblins.

But even so, black-red aggro struggled just because their creatures are so suboptimal in the mid to late game. It's great at first when you have a bunch of aggressive little guys who come flying out of the gates. They come on strong, taking down one or two opponents, and then...

...they just run out of gas. Pretty soon, you're the one sitting there with a bunch of dorky Goblins, and you can't attack through someone's wall of bulky 6/6 dragons and their crazy angels and their muscley apes.

Oh, sure, you can try to draw your own dragons and Avatar of Woe... but because their deck's built on a higher mana curve (which is to say that their deck has fewer cards meant for the early game, leaving more good cards for the late game), chances are good they're going to draw more heavy hitters than you do.

So what's a black-red aggronaut to do?

Generally, targeted removal doesn't work, because you don't have enough removal to go around. And global destruction hurts you more than it hurts them. So you just play the role of scavenger, waiting,

Now, with a little luck you can just bide your time until everyone's forgotten about you. "He's just the Goblin player," they'll shrug. "I'll pick him off after I've finished with Mr. Vedalken Shackles over here."

They turn their attention elsewhere. And while they're bending over backwards to handle the quote-unquote "real" threat, you drop Din of the Fireherd with an army of black-red Goblins on the table, leaving them pantsed as you charge in.

There are only three issues with Din, really; the first is its eight-mana cost, but that's pretty doable in multiplayer. The second is that it does, as I mentioned, require some setup—in your worst-case scenario, you'll get a Stone Rainand a Chainer's Edictand a 5/5 token out of a Din. * But for eight mana, you want to rain legendary death and destruction down on their heads!

The third is sadly understandable: while you can use the 5/5 token to attack anyone you please, the good effects of Din of the Fireherd only target one opponent. But frankly, if it targeted all opponents, it'd be way too good, so I'll give this one to Wizards. (Besides, often taking one opponent down is enough to clear a path to victory for your little guys.)

Of course, you don't have to play Goblins—a nice way of ensuring you don't spend all your cards putting guys on the table is to generate tokens, and fortunately that's something that black and red excel at.

Red has a long and storied history of creature token-generating abilities, each of which sets you up nicely for the Fireherd: Firecat Blitz, Empty the Warrens, Goblin Offensive, Kher Keep, Siege-Gang Commander, or even Hostility plus a few random burn spells will leave your opponent landless.

So really, it's the black side of this card that's the juice, snuffing their entire defense with a single spell if you have enough dudes. Sadly, black token-generators are a little thinner on the ground and a little more inefficient on the whole. Bitterblossom is powerful, but riskier in multiplayer where more people will be gunning for you. (You could try for Notorious Throng, but in my experience if you can't win after a big Throng and that juicy extra turn, nothing's going to help you.) Endrek Sahr, Master Breeder's good, but a little hard to control, so you might well go with the more mana-intensive option of Skeletal Vampire or Weirding Shaman.

You might want to go Goblins and hope you can a) get a Boggart Mob down and b) have someone to hit who can't (or won't!) block you. You can always pay three mana for a Sarpadian Empires, Vol VII, and certainly they'll probably laugh at you when you whip out the old-school goodness of Breeding Pit.

Bridge from Below? Risky in multiplayer, but sometimes worth it. And if you're assuming a Wrath of God is on the way, get tricksy and put out several guys you expect to die and give you black tokens, like all the Penumbra creatures from Apocalypse, Haunted Angel, or Rotlung Reanimator.

The funniest play, though? "I'll Carrion my own creature in response to your removal spell. Next turn, Din of the Fireherd! Take that!"

What about black-red creature tokens, then? Wouldn't it be better if you could make all of your guys black and red? Well, if Balduvian Dead didn't require you to pay

per card or remove them at end of turn, it'd be a perfect fit.

So instead, may I suggest Sek'Kuar, Deathkeeper are a good preventative measure in a deck that wants to abuse the Fireherd? After all, if someone drops the Wrath of God effect, clearing the table, Sek'Kuar will leave you with a field full of red-black dudes just waiting for a Fireherd to shriek them into oblivion!

What you have here is a card that's going to reward some creative gentleman who figures out how to get a bunch of black and red guys on the table and then drop the bomb.

The gates are down. Your men once faced an army; now they face nothing but shattered rock and the bones of the dead. Have them charge across that field, and your enemy will hear the Din of the Fireherd.

* – Well, okay. Because the wording of this spell, if the targeted opponent becomes an illegal target—whether that's because he manages to drop a True Believer into play at instant-speed or someone else cacks him in response—then the spell fails to resolve and you get nothing, not even a token. But hopefully, that won't happen too often!