rerelease Events, like those that happened worldwide this past weekend for New Phyrexia, are one of the most exciting times for me to being playing Magic. While we've had the luxury of both the Card Image Gallery and Gatherer being updated with the entirety of the set for almost two weeks, it wasn't until this past weekend that we had our first chance to see the latest cards live. I had an excellent time getting my hands even dirtier with the latest wares from the Phyrexians, and I was pleasantly surprised by the ferocity of the Mirran Resistance.

Something tells me the story isn't really over. 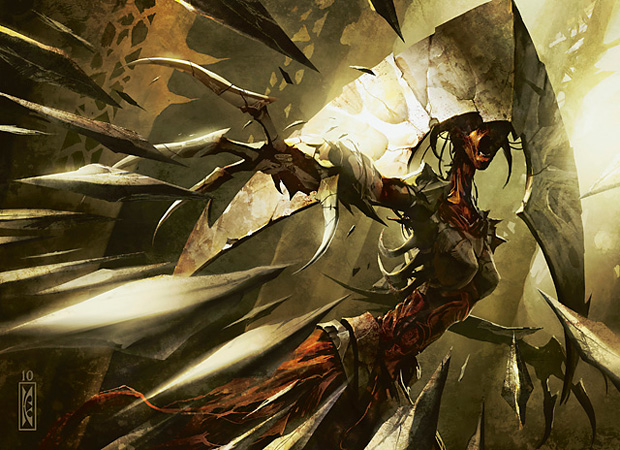 Regardless, Phyrexians make all the good guys go bad eventually, so I'm not concerned. If you don't believe me (or do, for that matter) then try out a Launch Party near you this weekend; I guarantee that you'll see some amazing things!

This week, however, is a celebration of Phyrexian glory. While we may find some endearing features on the losing side, it's the winners of wars that get to write the history books. And if there are history books being written on Mirro—er, New Phyrexia now, the writers would be the Praetors: chief among Phyrexians, closest to the Father of Machines, and gifted with true, genuine sentience.

While I spoke about Vorinclex and a few other Praetors in last week's article (as well as about Type 5, hint hint), this week is a chance to revisit them and share something beyond another deck that makes other players cry.

The problem I faced, however, was bringing together a surly bunch of selfish, insular, plane-dominating jerks into one deck.

I'll get back to Praetors in a moment. First, let me share a way to play that some of you are already familiar with and may still even enjoy regularly today: Rainbow Stairwell.

With five Praetors, five colors, five flavors of Phyrexian fatty all in one deck, Rainbow Stairwell is an excellent way to— 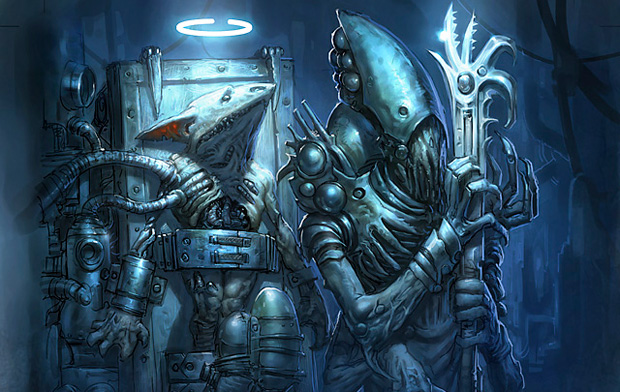 This format is inadequate. Send it to the splicers for innovation.

Uh, well, that. Rainbow Stairwell an excellent format for five-color fun but there's just a tiny problem: most of the Praetors costs more than six mana. The usual route doesn't work as we're capped at going up to six mana. But the answer is to simply follow Phyrexian footsteps and splice some improvements onto our stairwell: what if the colors themselves were stairs too?

Now we're cooking with glistening oil! The truth is that Rainbow Stairwell is as complex or simple as you'd like it to me, at least as long as you're following the function and principle of the format. I'll share another localization of Rainbow Stairwell at the end but, for now, let's walk through a quick and compleated build of a Phyrexian Stairwell deck: 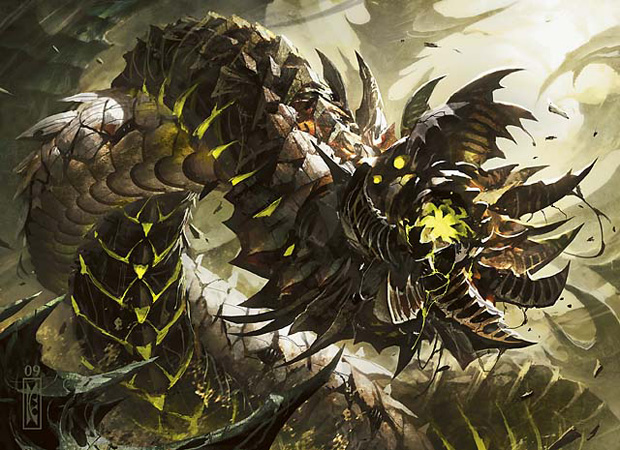 Since we're going to have a much higher average casting cost across the deck I wanted to make sure I had cheaper, easier-to-cast things that help my mana flow. Artifacts are perfect for this:

While Wurmcoil Engine won't be fixing my mana, it is a powerful Phyrexian card that's also easy to cast. The rest of the colorless cards are everything I'd want to see in a deck of big spells and bigger aspirations; you can certainly pick from a variety to suit your tastes. 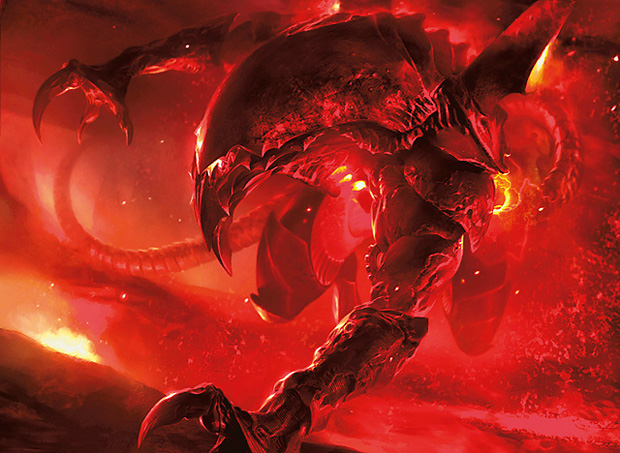 Red has the cheapest Praetor, but also comes with a bevy of beautiful options.

Red is a pretty spiffy color for us, providing a combination of beef and burn to create a melding of something delicious. The hidden all-star here is Fiery Fall: it's not only a spell that kills creatures—handy—but also a mana fixer helps us find exactly the land we want. Neat! 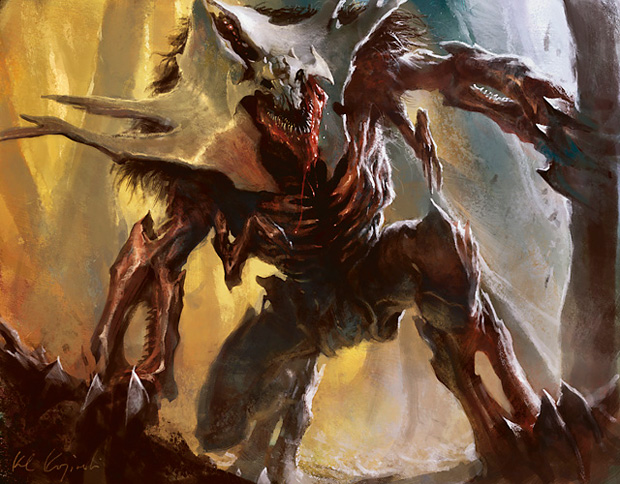 Green has a lot of amazing options for us to try out, too:

A natural at color fixing and land fetching, green helps patch up where artifacts left off while providing the Praetor with the best mana ability ever, hands down. But I'll admit it here: I cheated with Krosan Tusker, as I'll almost never actually play it as a seven-mana beat stick and instead cycle it away. 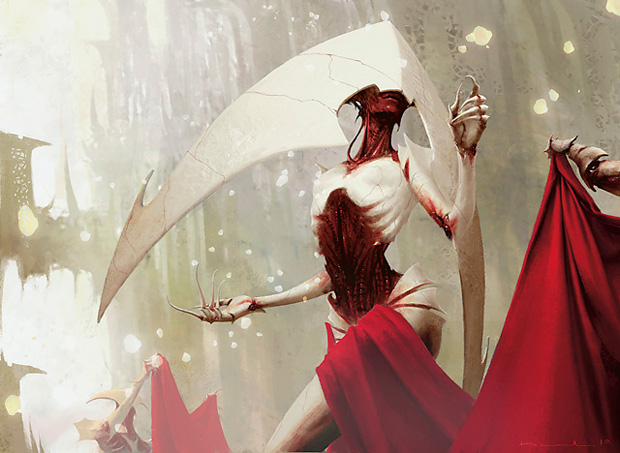 White is where choices start to get very interested and a little esoteric:

Choices get a little slimmer as the converted mana cost rises, but white has some of my favorite cards to cast, like Miraculous Recovery and Chant of Vitu-Ghazi. Bringer of the White Dawn is a strange fellow: without an assortment of artifacts, what are we returning? 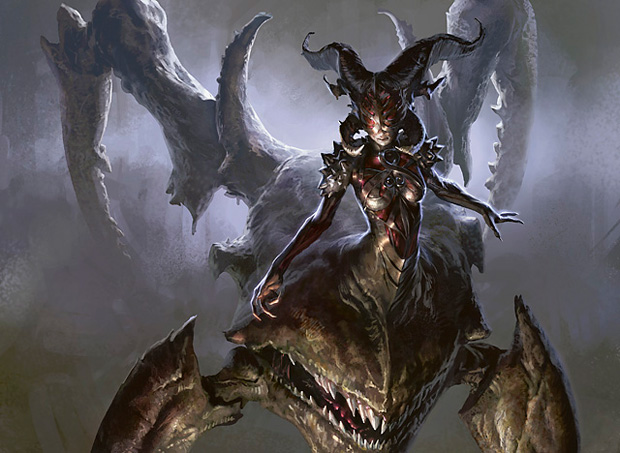 Nothing necessarily, as its alternate cost helps us slip it into play without waiting for the full mana load. And it's alternate costs that make black tick too:

5. Shriekmaw
6. Betrayal of Flesh
7. Sheoldred, Whispering One
8. Decree of Pain
9. Bringer of the Black Dawn
10. Curse of the Cabal

The reason I set black to rise up to converted mana cost 10 is just so I had an excuse to put Curse of the Cabal into a new deck. It's a card I've enjoyed seeing create various degrees of finagling in multiplayer, and here among the Phyrexian Praetors is should be no different. 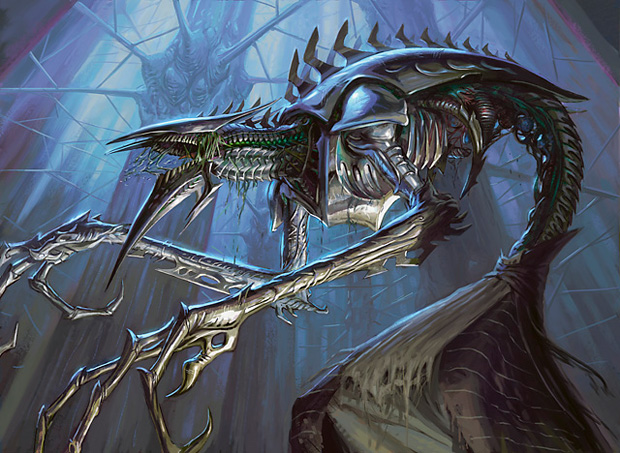 While there is only one option for blue at 11 mana, this is one of the few decks where casting Grozoth is something totally and completely awesome to do (and transmuting it into something else works too). Incidentally, Phyrexian Ingester is a pretty gnarly way to bring out a big creature, especially if your friends have oversized creatures of their own!

Taking all of these together, a completed Phyrexian Stairwell deck would look something like this:

1 Shriekmaw 1 Sheoldred, Whispering One 1 Bringer of the Black Dawn 1 Curse of the Cabal 1 Decree of Pain 1 Betrayal of Flesh

Putting together this type of Phyrexian deck is certainly an exercise in both creativity and compromise. While the lands seem a little lean, a good chunk of them provide many different colors of mana. Rupture Spire is one of my all-time favorites, and it's in decks like this that the little common from Conflux can shine!

Of course, Phyrexian Stairwell is just one way to splice up a fantastic way to play to fit a specific need: playing our new overlords. I, for one, welcome this Friday's release of New Phyrexia. I hope you too are just as pumped as I am!

And whether you're planning to pick up just a few packs or entire boxes of New Phyrexia, I implore you to wait to open them: next week should be a definite treat for anyone with the itch to open packs!

Not long after Alara Reborn was released, the players around my local game store decided to get down Stairwell style but using a multicolor-permitting approach. Like everyone else, we also adapted Rainbow Stairwell to our desired purposes.

Three flavors of Rainbow Stairwell: Vanilla, French Vanilla, and Neapolitan. What other flavors have you tried? 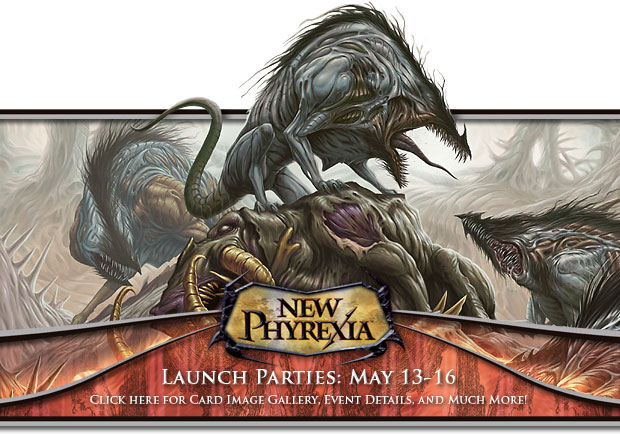