weeks ago, this column took on the topic of "ganging up" in free-for-all formats. The feedback from that article led to an article two weeks ago on a special case many readers brought up – when the ganging happens toward a perceived "best player".

As I stated back then, tagging the "best player" is often a sign of good decision-making. Yes, it can be taken too far – but players in most group play situations are like a wolf pack, and the alpha is always going to be fending off challenges. You can't become #1 without knocking out #1.

But pack behavior is not the only common animal behavior we Magic players indulge in – we also like a good feeding frenzy.

Blood In The Water 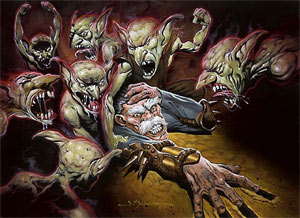 Most teenagers and adults know the well-worn metaphor: sharks gather near prey, one takes a bite, blood hits the water…and suddenly, bedlam breaks out. Everybody gets hit a little, but the first to bleed is almost certainly the first to die. And of course, that's the way with many Magic games: one player takes a small hit, and suddenly everybody joins in. Three or four turns later, the player with a slight flesh wound is a decapitated mess.

What's going on? Nothing too surprising: the attackers have excellent senses of smell, blood is pungent, and the instinct to feed overwhelms all.

Based on my email – hardly a scientific poll, but often an illuminating sample – this sort of frenzy appears to happen more often in younger groups. If true, why would this be the case? Is it because younger people are still growing out of bullying behaviors (something plenty of adults struggle with as well)? Some of my readers clearly think so – I heard many complaints from high school students who consistently get blown out of games where they show the slightest weakness, and they often feel quite bitter. Are they being bullied? Perhaps.

But sometimes, it might be something simpler – something the shark already knows.

When To Let The Sharks Feed

If feeding frenzies happen more often with younger groups, it may have a lot less to do with attitude than with structure – most high school students play Magic during school lunch hour (which, in America, is generally more like 40 minutes). As any shark can tell you, speed is of the essence while eating. Diplomacy and even-handedness takes time. Heck, smart threat analysis takes time. It's much easier to simply hit the low life total and hope for the best. Hey, if you're wrong, at least the game's over faster, right?

When this is indeed the reasoning behind the gang-up, I'm actually in favor of it. Hitting the low life total is actually a well-established casual format in some groups – and it does speed up the game. (It also can, under certain circumstances, slow it down.) High school students who are buds, know each other pretty well, have roughly the same level of play skill, and establish this sort of culture in their Magic play aren't doing anything wrong. They're just trying to get games done before time runs out.

The trend is less desirable when there's one player who always seems to play the role of Tuna.

Groundhog Day, As Lived By Tuna 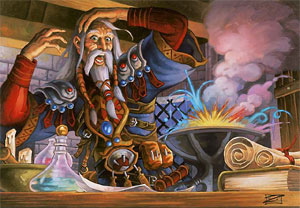 Empathy is not a common masculine trait – and since most Magic players are male, let me run you all through a quick exercise in imagination.

For the next five to ten Magic games your group plays, pay attention to who's struggling early. Is it the same person over and over? If not, you can simply use this time to note the same common causes for bad starts – a poor decision not to mulligan, simple bad luck, or whatever.

If it is the same person most of the time, spend some time imagining yourself in this person's seat. We'll call him Tuna. When Tuna plays Magic, what is their experience? Does a typical Tuna Magic game look something like this?

You may have someone like this in your group without even realizing it – especially if you have a newer player. It's easy to take Tuna's failure for granted. Of course they're going to suck, they're new at this. And don't they have to go through what the rest of us went through?

Maybe. But most of us learned the game in groups where the weakest player didn't get completely crushed, time after time. It's hard to pick up intermediate Magic skills when every game you play lasts about four or five turns. And it's not much fun either.

Now, if you already know all of this and you still enjoy dumping on Tuna, I'd submit you and I will probably have more to say to each other after you're done growing up. We'll have great conversations, you and I. Oh, the conversations we'll have! They'll be glorious, and we'll laugh, and laugh, and laugh. And let me tell you – it will be a special day, when you finally find that golden nugget of self-esteem.

Meanwhile, don’t be shocked if your group gets a bit smaller soon.

So if you're interested in not bullying the weakest player, but it's happening anyway, what do you do? And what do you do if you are Tuna and you're sick of getting ripped apart by a gang of attackers?

People – including Magic players – spend way, way too much time getting down about things they cannot control. They lose opportunities to improve their lot, because they're not focusing on the things they can control.

Once you're focusing on the correct column, you can come up with actual strategies to change things. Here is what I would recommend to the so-called "weakest player", in pretty much the order I'd recommend it. 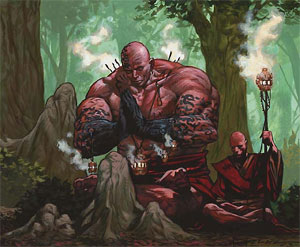 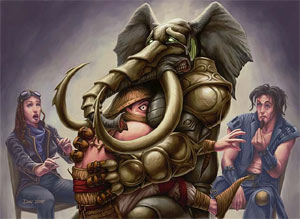 Now, if you're not the weakest player in your group but have sympathy for poor Tuna, your to-do list is a bit shorter – but just as important. Again, in order of my suggested priorities:

This will close out the multi-week series on ganging-up in multiplayer. I hope you've found this series helpful in dealing with your group. So much of what I've recommended in all three articles plays around in tricky territory. Before taking any of the steps I've suggested, be sure you're aware of:

The last two factors are particularly important. The fewer other play options you have in your area, the more latitude everybody has to give each other and the more careful you all have to be with drastic measures (or threatening drastic measures). Also, the deeper your pre-existing friendships, the more you should look inward for solutions – after all, you got along fine before you started playing Magic, didn't you?

So, does that mean that in a group of friends that is the only Magic option for a few hundred square miles, bad behavior is okay? No. It means that you have less control over what the entire group does. And it means you have to be more careful, and smarter, in exploring the things you do control.

Remember those two columns. Things you control – and things you don't. That Magic game last night will not be the last time you will find yourself needing to know the difference.

Anthony Alongi has been playing multiple Magic formats for over seven years, and has been a writer for much longer than that. His latest book, JENNIFER SCALES AND THE MESSENGER OF LIGHT, releases this June.