Take This Doll And Stuff It!

in July I tell Scott Johns, this site's content manager, that I regrettably must end my time at magicthegathering.com. Yes, I still love everyone at Wizards; yes, I will always look back fondly on my time here; but time has just plain caught up with me. So my last article will be the end of August.

Then he sends me an email:

…Just checking on this, are you positive you don't want to wait and finish with the Time Spiral previews instead? I picked this batch with you in mind, and I think you will find the TSP batch funny…

Let me know if it's actually a possibility and I'll just send you the TSP cards we picked for you, but only if there's actually some chance, no fair dipping for free info!

In my eight-plus years of writing about Magic, this was the first time I actually considered dipping for the free info and violating my non-disclosure agreement. Honestly, what could they do – fire me?

But I'm a bigger man than that. Plus, this way I got to close out the two-color theme weeks with Rakdos, choose my own theme week, and do a bunch of other stuff that wouldn't be possible. Best of all, I got to preview this card: 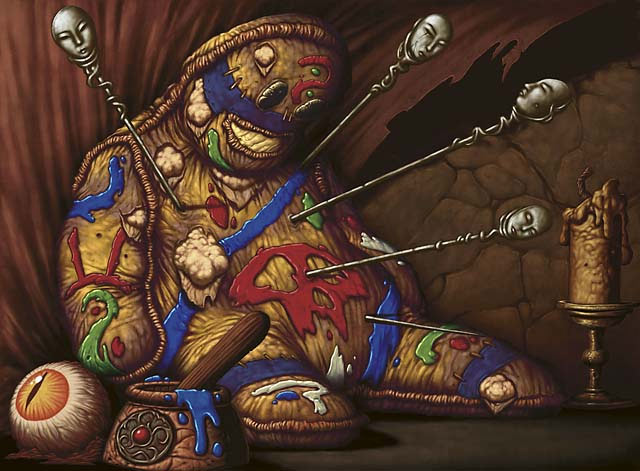 What is this, you ask? And I answer: really, shouldn't the artwork be enough? Can't you tell this thing's going to be a riot? Can't you tell it will delight casual players, make experienced tournament players chuckle a moment before they build with something else, and annoy the stuffing out of the wannabes?

Can't you already tell this is the perfect card for me to end my Magic writing career on?

Very well. You need more. I understand that. I'll make a deal with you: I will tell you everything you need to know about this card, before I'm done with this article. The revelations, however, will come slowly. Now, this might not come across as sexy-striptease as Matt Cavotta's preview of Jaya Ballard; but then again, this thing's going to last a lot longer on the board than Jaya ever will.

The first thing I will reveal, just in case there are a few hard-luck cases still hoping this thing's tournament-efficient, is that this is a 0/1 for five mana.

*Anthony pauses to close the screen door they all left swinging, in their rush to get out.*

That's better. Now that we all have more breathing room, have a seat and I'll tell you more.

The name of this card is Stuffy Doll.

Of course it's not. It would have been amazing if Mark Rosewater hadn't spilled the name two weeks ago. As it is, it's only mildly interesting. "Oh, look," the once-eager, now-jaded reader mumbles to his computer screen. "Stuffy Doll. Rosewater warned us about that one. Heck, I guessed this card was Stuffy Doll when I saw the artwork. I'm that freaking clever."

You know what? I'm not bitter. Stuffy Doll's a great name. So is Wheel of Fate, another preview card title Rosewater spoiled before I got the chance. But hey, why get worked up – most readers with a lick of sense don't read Rosewater anyway. It's not like he works at Wizards, or lets readers help write his columns or offers awesome internships, or has really cool column ideas that piss me off because I don't think of them first. Right? Honestly, what value can the man possibly add to a site like this? And what's with that chicken suit he keeps wearing, anyway? Must he leap in front of every crowd, waving his arms like a madman, just to get attention? Did he get away with this on the set of Roseanne? Didn't Sara Gilbert just kick his ass? If not, why not?!

Nope, no bitterness at all. Where were we again? Right – Stuffy Doll, five mana, 0/1, looks like a stuffy doll. On we go.

As you might deduce from the artwork, which features all five mana colors, Stuffy Doll is not tied to any one color. While your first guess on casting cost after receiving that information might be the coveted

Stuffy Doll is an artifact creature – a construct, to be precise. Construct is just a simple creature type and doesn't have any additional rulings attached. I think it would be cool if Wizards threw some on there, down the line. What else could Mark Gottlieb possibly be doing with his time?

Whenever you play a construct, all other players in the game have to nod at you with respectful expressions – because you're not playing some lame, over-hyped creature type like Elves or Birds. In fact, while we're in the middle of this ability's resolution, let's add this: everyone must then snark, as if spitting the names out, "Elves. Birds. Who plays that @#$%?" 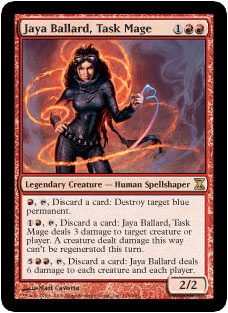 She only has three…

We're down to the rules text, which is the last piece I'll tease you on. Stuffy Doll has four abilities. Four! That punk Jaya only has three.

As Stuffy Doll comes into play, choose a player.

I'll admit, it doesn't look like much. But this single ability should tell the practiced multiplayer enthusiast at least three things:

Ready for the next rules text?

Whenever damage is dealt to Stuffy Doll, it deals that much damage to the chosen player.

Ah, now we have a path to victory. The more damage you can pile on top of this Stuffy Doll, the more you'll do to that player! You can use him as a great chump-blocker against huge (non-trampling) creatures. You can aim a huge Fireball at him – more to the point, so can other players!

Oh sure, most 0/1s die when you hit them with, oh say, 1 damage, but that's not the point. The point is, who wants to come at you with a Krosan Cloudscraper when you have this in the way? You never have to risk him taking lethal damage – which is a good thing, with only 1 toughness!

Well, for one, he can't die from lethal damage. Behold the third ability:

I know how you're feeling. Oh, yes I do. You feel like this guy right here, stuffing his own kind of doll: 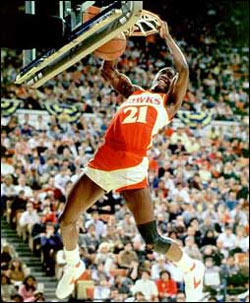 Come on. You know you want to get on up there with Dominique and cram something through a hoop. Maybe it's a basketball. Maybe it's this article. Maybe it's a Stuffy Doll. But make no mistake: only the Stuffy Doll will come through the exercise unscathed.

Yes, spells like Enfeeblement and Swords to Plowshares can still get rid of the Doll, bleah bleah bleah Here Comes Another Dunk Baby! 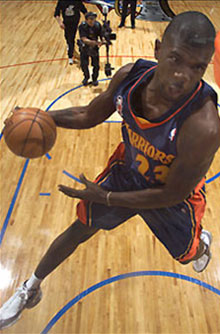 (For those interested, you can find more really good basketball dunking photos at http://www.nba.com/allstar2002/slamdunk/index.html. While I don't follow the NBA like I used to, I can still understand the appeal of a terrific slam dunk. I was lucky enough to be able to dunk a basketball. Once. Felt phenomenal. Never could do it again.)

For those of you confused by all the sailing basketballs, the important thing to remember here is that no matter how much damage the board lumps on top of Stuffy Doll, it's going to survive. Which means all the damage will end up resolving upon the chosen player.

Do we really need a fourth ability? What more could you possibly want?

What's that, you say? You'd like the ability to deal damage to the chosen player without using another card?

: Stuffy Doll deals 1 damage to itself.

This is the joke of the card, the part that reaches out with thumb and forefinger and flicks the other guy in the ear. No one attacks you? No one throws a Blaze at this thing? Everyone's being a real killjoy about the thing? Fine. You'll just tap it and have it deal damage to itself. No one denies the Stuffy Doll! No one!

What, you're not ready to stop, either?