Take Two, Call Me in the Morning

ersonal evolution—that is, the changes we willfully enact upon ourselves—is a strange beast. Running into someone you know who seems dramatically different can be both a strangely exciting and disappointingly self-reflective moment.

It's Infect Week here and if you're wondering why I'm bringing up aging it's because infect is poison, but it isn't. Like the same-but-completely-different person at a 10 year reunion, poison has been reinvented completely without losing its original charm of being an alternate win condition.

But first, a bit of historical background.

Poison was like many other ways to win that didn't involve causing life loss: different, unique, and pretty difficult to pull off. Millstone was perhaps the first—in Millstone's case milling or moving cards from the library to the graveyard so that eventually the players would try to draw a card from an empty library. Poison was one of the ways that caught on after that. 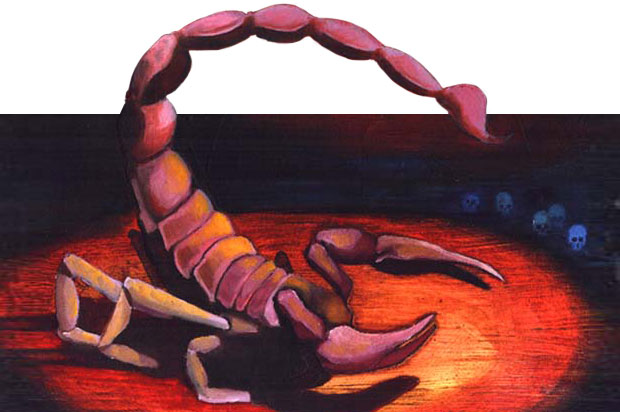 Mark Rosewater covered much of the history of poison, including some of the whys, so let's jump right to the point: functional poison decks were hard to build. Here's two older poison decks from two different poison lovers:

The deck aimed to inflict poison through a variety of means: creatures getting through thanks to evasion through Fear or Sleeper's Guile, or not being blocked through the work of Taunting Elf or Elvish Bard. Terror killed blockers otherwise and Natural Spring regained life lost due to not blocking.

The creatures that make poison here are like a greatest hits collection, many of them having ways to put two poison counters on an opponent. It wasn't always pretty but there weren't many other options.

Of course, going forward in time quite a bit didn't necessarily help things either.

Some of the same type of interplay as the other poison deck is at work here: odd numbers of cards due to availability, evasion-granting abilities (like the old gem Runed Arch), and a low land count. This take features the powerful combo of Regrowth and Worldly Tutor which, together, should let the deck fire off whatever creatures it needs.

Both decks showcase the issue plaguing poison decks: getting the damage across. Hitting an opponent with your creatures that left poison counters behind meant forcing a deck to go through quite a few hoops. It was pretty tough to get going even with a little "modern" help.

Both decks were designed under the circumstance of "This is what I have to work with." Were there more ways to build these kinds of decks? Absolutely, but as was shared with me by more than just some of the poison aficionados out there, poison was uncool. Asking around for Sabertooth Cobras or Nafs Asps wasn't desirable.

I even got one story about how for a store owner's 40th birthday a bunch of players gave him the "worst" forty cards in Magic as a gag gift. Sabertooth Cobra was an early entrant in that listing. 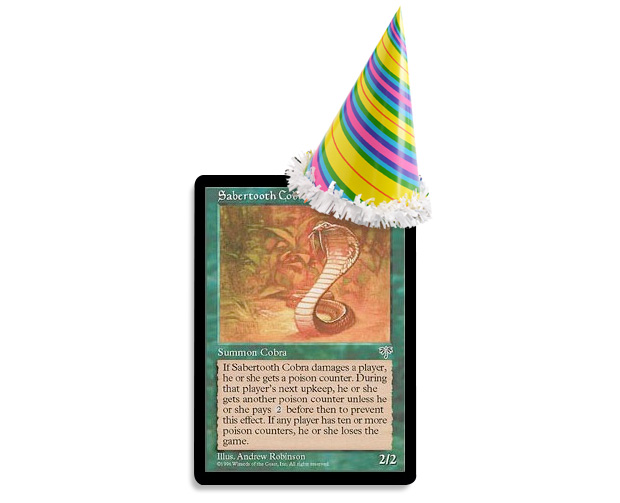 Poison is, today, very different from being a maligned and difficult approach to dueling other planeswalkers. The creatures and environment crafted today are quite different from those of the bygone era. This doesn't mean we can't recall those olden days and craft something new with the same feel as before.

Remodeling a classic is always tricky business, but accepting that liberties must be taken is a given: creatures just feel better today than a decade ago. Building an infect deck can be done in three easy steps:

Until there's some more infect, which if I was a gambling man I'd bet is coming in Mirrodin Besieged, the options are going to be a little limited. So in as true a fashion as I could I rifled through my Scars of Mirrodin cards, then I jumped over to Magic 2011 to fill in a few holes. Here's what I cooked up:

2 Corpse Cur 4 Hand of the Praetors

Attack! That's what this kind of poison deck wants to do. Each creature is meant to head across the table and tap the planeswalker opposing you. Complicating things beautifully are Untamed Might, for massive jumps in poison potential, and Bladed Pinions, which gives flying and a little first strike to boot. 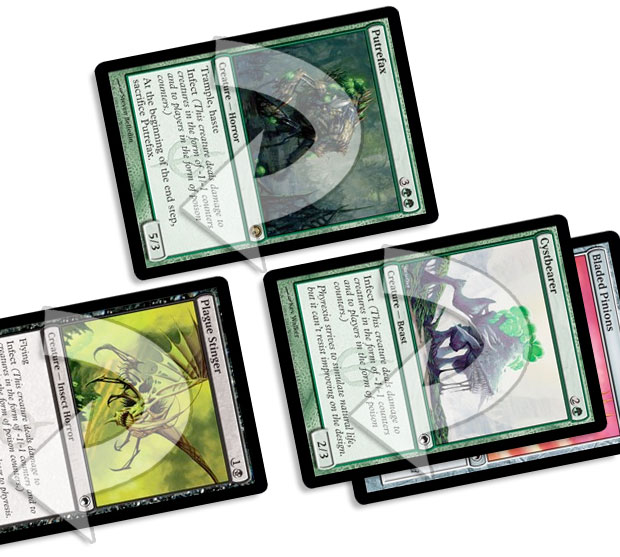 Doom Blade and Cultivate help smooth things out, clearing blockers and mana issues away, while Skithiryx, the Blight Dragon will almost always close things out.

If you don't have some of these poisonous critters don't fear: many of the cards come featured in the Phyrexian Poison Intro Pack. Replacing some of my picks for ones you prefer is totally cool, and something I recommend. Build your own take on poison with whatever you happen to have—you'd be surprised with what comes up.

In my case what happened to come up were some interesting games when I hit my local game store.

It was a Thursday night and the usual crowd was in full bloom, about half either already neck-deep in EDH or Group Game Draft. After giving my deck a thorough shuffle I ran into Brian, a guy proud to pack one of the meanest black multiplayer decks I've ever seen. 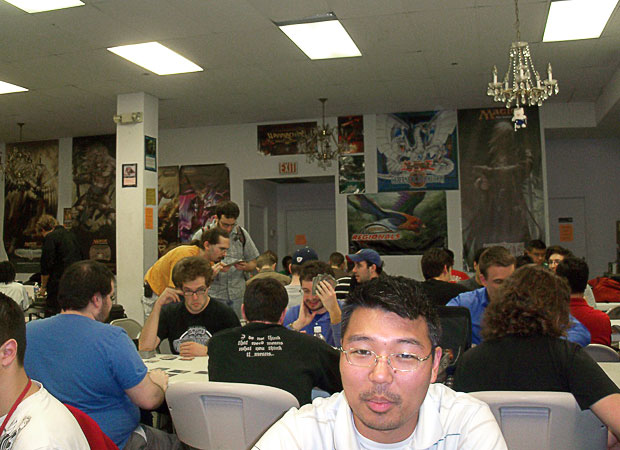 Pictured: Brian, Evil Genius, with unsuspecting masses. Not pictured: the entire other half of the store devoted to tabletop gaming.

Since he didn't have a Standard legal deck his "green deck" would have to do. Knowing full well that green deck can quite quickly turn into "mean deck" I figured this would be a good test to see just what infect could do.

Like most green decks, elves and mana-makers popped in early, including a Garruk Wildspeaker, which lead to a turn-four Primalcrux. 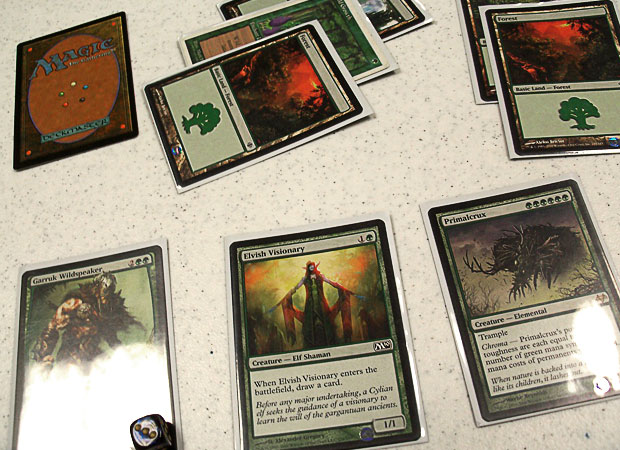 Yup. 60% of the time this happens every time.

Fortunately, the Doom Blade I had in my hand let me respond to his Overwhelming Stampede on the follow turn. Dodging the +10/+10 bullet train to another game I fired my infectious salvo back with a Plague Stinger boosted by a +5/+5 Untamed Might. 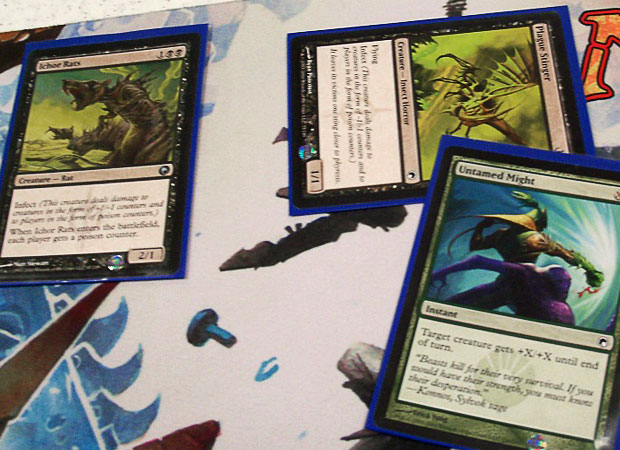 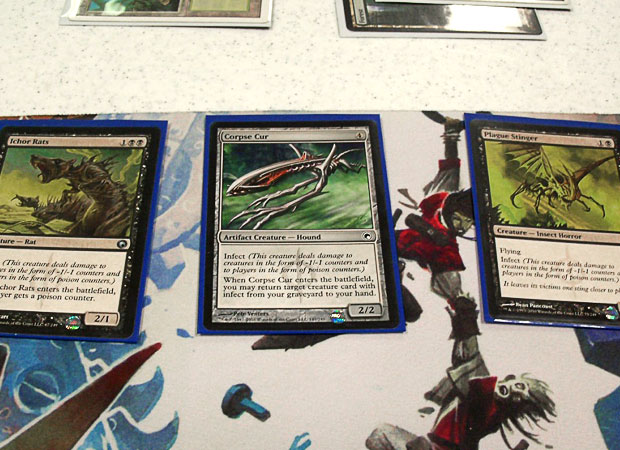 It's me again, Margaret!

Brian's deck had one more trick up it's sleeve: Kaysa. Popping Garruk's Overrun let Brian slam in for all the damage he could, but it only dropped me to 3 life.

In one of our obligatory rematches, Primalcrux and Garruk showed up again but my trump card Skithiryx, the Blight Dragon on back-to-back turns let me squeak by. Double Dragon, baby. Another game had a turn-four Gaea's Revenge.

Another buddy of mine, Josh, said he had "a new deck" to try out. What better way than against my new deck?

Josh started off with a Wall of Omens and back-to-back Contagion Clasps for my Plague Stinger and Ichor Rats. I had double Ichorclaw Myr but Josh had a Journey to Nowhere for one. Hand of the Praetors let me take a stab with poison, however, and now the needle was moving. 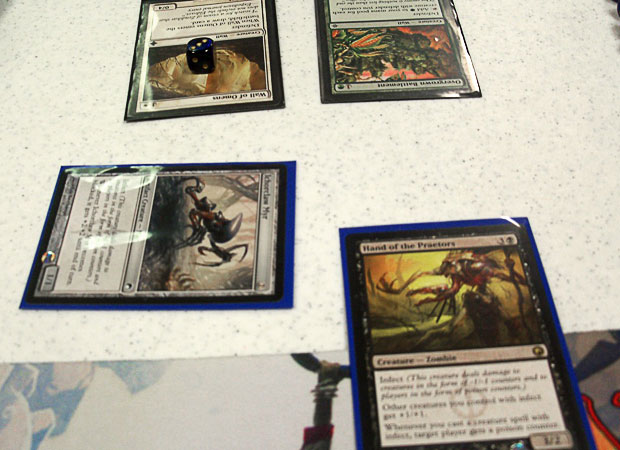 And in the game of all doubles, the follow-up Journey to Nowhere (on Hand of the Praetors, obviously) from Josh should have come as no surprise. Without batting an eye I laid out Skithiryx, the Blight Dragon and upped Josh's poison counter count to eight after he went for a Summoning Trap and whiffed. 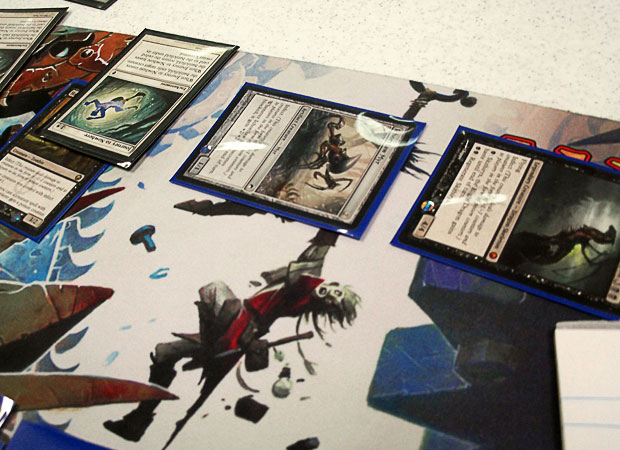 Everybody just leave us alone.

But Josh wasn't out of tricks yet when he leveled eight mana for a Genesis Wave and hit an incredible flop: 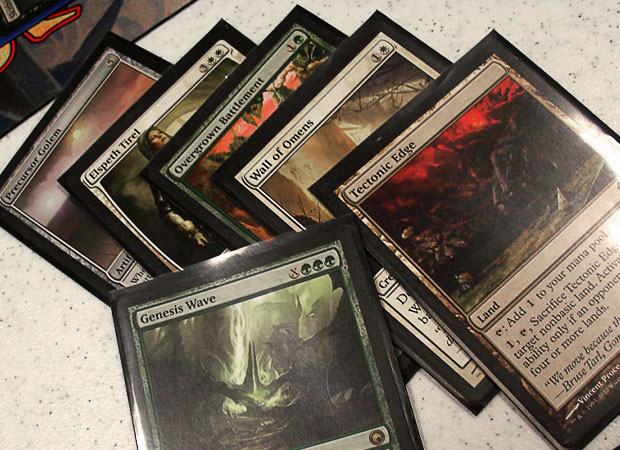 I was both ecstatic that Genesis Wave was being used and terrified by the raw power revealed. Unfortunately for Josh, none of that awesomeness could stop Skithiryx.

We followed up with another game and my deck fired off on all cylinders, leading up for double Hand of the Praetors and a Putrefax crashing in. Even throwing away all of his Soldier tokens from Elspeth still put him up at nine poison counters. 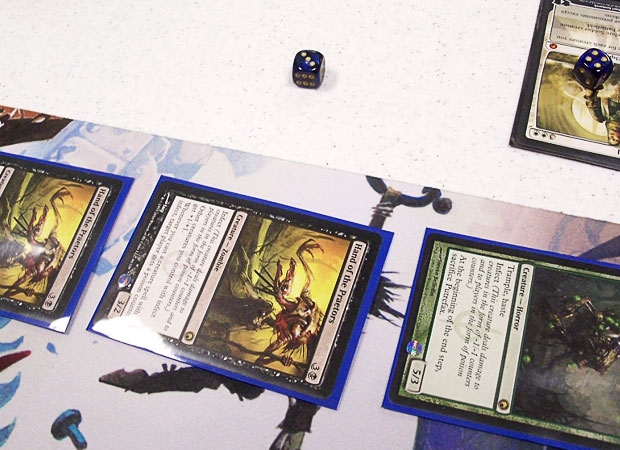 Totally not fair, but insanely awesome in so many ways!

Even with a sample of just two opponents I could feel there were really cool things going on in my deck:

Poison, and its modern incarnation in infect, is a boatload of fun to run! I'm sure there will be some tweaks to my deck in the coming weeks and I hope you're up for sharing your take on getting a little poison splashed around. Like poison from long before, there are a lot of ways to build a deck around it today and I know there will be some awesome ideas popping up elsewhere. 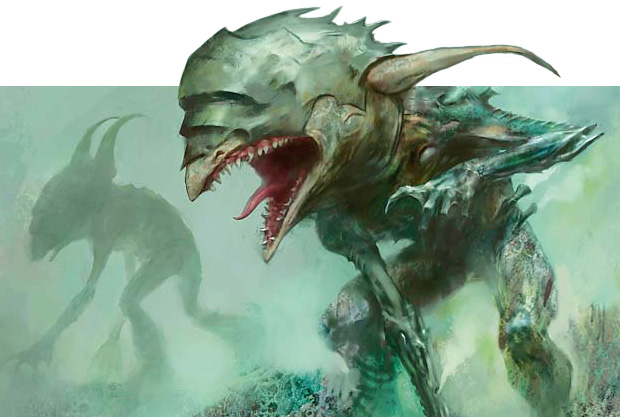 So how do you feel about poison? Are you planning for or against piling on the bodies with infect? Will your decks remain pure or will the poison reach into your very heart? Do you have an answer?

The fate of Mirrodin lies with you.