The "A" in Teamwork

The cold air stirred the fog lightly as he briskly walked through the ruins. His boots, worn from weeks of hiking and splotched from the minor traps he's tripped, made soft footfalls but still echoed off the shattered walls around him. He was so close to the room holding the relic he could swear he felt its power creeping around him.

Looking down he saw the stone he just stepped on depressed slightly into the floor while, above, another stone creaked and gave way. Frantically throwing his arms up, he saw his fate: snakes, surely poisonous and angry, being dumped upon him with their hollow fangs already opening as they neared him.

They struck down and yet he felt no pain. Perhaps that was the poison? No, his legs held out. An illusion? No, the snakes had weight and were dumped by a mechanical trap – there was no magic in this one and yet he felt it surging around. Then he heard the frantic whispering of the chant from the cleric from Kabira that protected him.

Wasting no further time he drew his trusted machete. While it wasn't as strong as the blades the Kor forged, a machete was often better in the thick growth of his homeland, Oran-Rief and the thick tendrils and vines of other nasties outside of it. Swinging rapidly, he struck them down while backpedalling. The cleric had become eerily silent and would need time to set up the protection again, if it could be set up again. 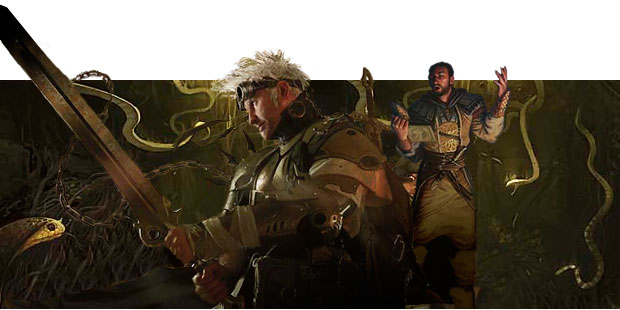 Hacking frantically he glanced left to see a coiled snake poised to strike a nearly unavoidable blow ... until it was sent flying through the air in pieces. The experienced blademaster they'd picked up while passing through Kazandu had jumped into the fray. The cleric, too, reentered the fray chanting again with magical protection surging forward.

The man who has survived the dangers alone was always invigorated by his fellow adventurers. He would live today. He would find the relic they all sought. They would all become richer than ever before. It was good to be with reliable people.

elcome to Serious Fun! While (Vampire) Editor Kelly Digges was kind enough to tease out my name for you I'd love to fill in your curiosity. However, this week is Ally Week, and I'd much rather talk about Magic than feed my ego (though it's always a close call). Sound off in the forums or send me an email, and I'll cover the most requested items in a week or two.

When I saw the first Allies previewed I must admit that I was somewhat skeptical. I had a former love affair with Slivers, and while running out the self-improving hive was generally fun, it became more ordinary, expected, and all-too-similar every time I played them—in another word, boring.

Allies, at my first glance, seemed to lead to the same inevitability: a multicolored deck featuring the same Allies playing out in the same way. Like most things in Magic, playing in the Prerelease and Launch Party proved me wrong in so many ways. Allies were less like Slivers and more like modular creatures from Darksteel: they liked to see each other but were still okay creatures on their own. You didn't need every Ally, but a few more were always nice to see. I went from ignoring Allies in my first Sealed Deck to splashing just to include two off-color Allies in a very Ally-heavy deck in my third. Allies had rekindled my love of a creature type represented across every color, and had done so in a big way.

Allies, as a new tribe, are somewhat limited in number (cards with changeling and Mistform Ultimus aside) but each Ally brings a relevant effect, some a little bigger than others.

After cracking more than a few packs of Zendikar, I realized that Allies would make a fine tribe to make a deck with. I've never been truly fond of tribal decks after my experience with Slivers, so I wanted to set up my deck to be as exciting as possible, with a few twists thrown in.

Like assembling a team of super heroes, I scanned over all the Allies (from Zendikar) available to see who could make the team. A few standouts arose:

Oran-Rief Survivalist is a "bear" (a 2/2 creature for two mana) who grows with every teammate. If it comes out as early as turn two, it promises to be a guy who grows quickly.

Kazandu Blademaster is another bear, but it comes with combat-friendly keywords first strike and vigilance. It's another early-turn, quick-to-grow guy.

Umara Raptor costs a little more than the bears above but comes with flying—a nice perk, to have a guy who can cover the air.

Kabira Evangel is the first "spell type" who jumped out me, as its ability to grant protection to a color for the entire team seems awesome. The idea of the cleric protecting the team out front makes sense.

Turntimber Ranger doesn't feel like a big guy, but it brings a lot of firepower for a small stature. A free creature for playing more Allies is always nice, even if they just serve as cover for the team, and like the Survivalist and Bladematser, the Ranger grows too. Not too shabby!

Kazuul Warlord feels like the Ally lord: buffing the team when he enters the battlefield is nice, but continuing to buff each time a teammate joins the fray is just amazing.

The real question that faced me was "How do I put this stellar team together?" My answer was to cut the colors down to three, saying goodbye to Umara Raptor, and focus on swinging hard. Adding in a sprinkling of Beastmaster Ascension seemed like the way to go, turning even my lowliest creature into a beating machine.

Of course, all was fine and dandy with my preliminary until I ran into Day of Judgment. While white, green, and red are fine colors, I knew that if my team couldn't withstand a board wipe there were going to be a lot of games I wouldn't find fun.

Eldrazi Monument seemed like a great answer to keep my team at superhero level: indestructible, flying, and +1/+1 is just too good to pass up. Except for the part where one of the team members gets sacrificed—ouch.

Allies were a team, but what were they missing? With the Ascension and Monument they were looking great but I needed to tie it all together.

I turned to my Peasant deck—a format I'll come back to on another day—to find the one creature I knew fit perfectly: Selesnya Guildmage. Pumping the team, making tokens to swing with or sacrifice, and being easy to cast became the glue that bound my deck. While poking around the rest of my Ravnica collection I realized that I was missing the perfect card: Ghostway. 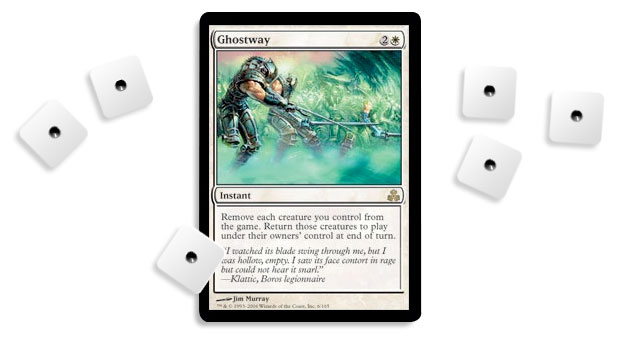 Ghostway doesn't just help my team dodge a tactical nuke like Day of Judgment, but also lets each Ally trigger again off themselves and each other simultaneously. Think about a kicked Rite of Replication on Turntimber Ranger, only smaller, much cheaper, and lots more Allies. That sound of "Oh, wow!" is awesome incarnate.

Here's what I ended up after piling this together:

I didn't get the chance to play it out fully (yet!), but the initial testing was fun. Turn two Oran-Rief Survivalist into turn three Harrow, Kazandu Blademaster, into turn four Turntimber Ranger was incredibly intimidating for my buddy to see. Two turns later, he dropped good old Wrath of God—and my Ghostway in response actually made him laugh.

Allies all want to see more Allies, which brings the obvious look at changelings. Any good team of superheroes need wacky sidekicks, especially when the wacky sidekicks bring something new to the battlefield.

Changeling Hero lets me convert the weakest creature I have out into a 4/4 with lifelink. Gaining a little bit of life is always nice, and being able to have an Ally come back and trigger again is gravy on top.

Changeling Berserker looks like a great way to convert one of the "better" Allies, like Turntimber Ranger, away for a moment and send some damage out right away.

Chameleon Colossus works well with Eldrazi Monument (flying and a power boost) and dodges a lot of the removal out there. If you haven't seen it yet, you may just find you love it all by itself.

Back to the Drawing Board

So what about the forgotten Umara Raptor from before? White, green, and red allies aren't the only road to teamwork. Superheroes need supervillains, and what better villains to Naya colors than Grixis colors—blue, black, and red?

Umara Raptor makes a great partner with Nimana Sell-Sword and, while we're rolling through the Swamps, Bala Ged Thief for a little trickery. Of course, if I'm playing blue I'm drawing cards, so the big-brained Sea Gate Loremaster joins in the evil coalition as well.

With most of the evil team having solid toughness, running Pyroclasm and Volcanic Fallout seems like a nice foil for the superheroes. Murasa Pyromancer doubles as removal while still being an Ally, albeit one that hits first and asks questions later.

While it comes out of the gate a little slower than the Superheroes, it makes up for it in being able to kill creatures, utilize Grim Discovery to get some of its own back, and gain some life along the way. If Sea Gate Loremaster gets active it should be easy to draw the cards to deal with what's at hand. And remember, you can play Volcanic Fallout in response to the Ally trigger(s) going onto the stack—a nice (sneaky) little trick when the Superheroes are beginning to assemble.

It's Just You and Me Now

There's a lot of potential with Allies far beyond the basic decks here. Cards like Riptide Replicator, which can pump out an Ally every turn, and Conspiracy, which turns every creature into an Ally, can really push Allies over the top. Of course, if you want to get old school, Coat of Arms seems like any Ally team's best friend.

What Ally concoctions will you make this week? What Ally assemblies have you already put together? Desperate teams are looking for more support—don't leave them hanging!