Temptation from the Gods

ould you open Pandora's Box? You know you're not supposed to, but who knows what could be in there!? Admittedly, in hindsight, things didn't really work out for Pandora, but the allure of the unknown is strong, and resisting isn't easy.

Oh, so you think Pandora just lacked willpower? If it had been you, the world would not be inflicted with all the ills that were released when she opened the box, huh? Well, I bet that many of you only clicked on this article to see the preview card, so in a way, you already opened the box. So much for all that willpower!

How about I give you another chance? There is a link right below this paragraph. All you have to do is demonstrate that amazing willpower of yours and not click it.

Here it is: Click this link and open Pandora's Box. Or save humanity.

I knew you couldn't resist! 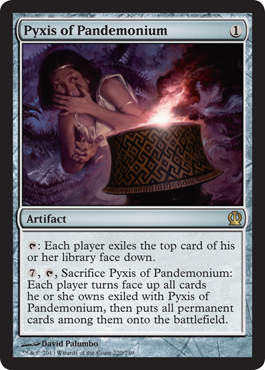 Pyxis of Pandemonium is the flavor-laden preview card!

For those of you wondering, cards that are exiled face down can't be seen by anyone, including the owner of the card. This means that you don't know what you are exiling, and your opponents don't know either.

Now the question is, "Are you going to use it?" I see Pyxis of Pandemonium as appealing to some groups of players, while others will hate it. If you love predictability in your games, you are going to hate this card. For you, this is an artifact that helps in a milling-style deck and will limit tutor abilities that put cards on top of libraries. That probably isn't enough. You can do your best to load crazy permanents face down with library manipulation, but then you never know what your opponent is going to get. 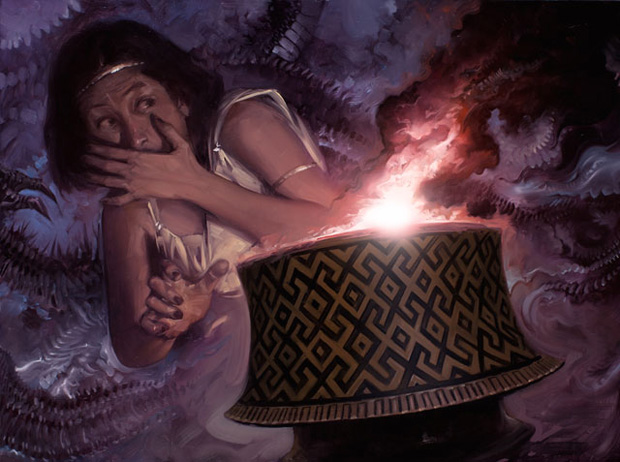 There are the Vorthos players out there who are going to love this card. The art is beautiful and truly guides you to Pandora's Box. The card recreates the feelings of unknown and curiosity that Pandora had. Not knowing and needing to know!

All right, though, this is Serious Fun! Is the card playable at your kitchen table? Of course it is! Practically every card ever made is playable in the right deck. What I'm really looking for are cards that make the Big Bang at the table. Eureka and Hypergenesis come to mind when I see this card, and I can see this being amazing.

The key to any card like this is to limit the negatives while accentuating the positives.

The positives are fairly obvious:

I initially wanted to compare this control to Nevinyrral's Disk or Pernicious Deed, but it is a different type of control. When you control a board-clearing spell that everyone knows about, it has a dramatic effect on how everyone else plays. Your opponents have to determine if they want to continue to put permanents onto the battlefield and risk a board wipe, or if they want to hold off. This kind of control over your opponents' plays makes for fun game play, but it also makes you, and the Pernicious Deed, the focus of the game. They need that card gone to return to their game plan.

Pyxis of Pandemonium plays out differently. The randomness means that the likelihood that things will work out in your favor is reduced. You can wait until you are in a dire situation to sacrifice Pyxis, but you may end up with a Guildmage while your opponents are getting Primeval Titans and other game-ending bombs. This randomness can work in your favor, though.

Having control means more than just controlling when you will sacrifice the Pyxis. Sensei's Divining Top, and other cards like it, will give you much more control over what cards are getting exiled, as well as ensuring you hit every land drop to get yourself to the point where you can sacrifice Pyxis of Pandemonium. You can also try to control your opponents' card draws, but this can be much more difficult and may not be worth it. I suspect simply controlling the cards you are exiling will be enough to tip most Pyxis reveals in your favor.

The negatives are threefold:

However you choose to use Pyxis of Pandemonium is up to you. I love wild changes and will likely put it in a deck like this one:

Between the Sphinx Ambassador stealing creatures and the Specters forcing discard, my opponents will have a tough time disrupting my plans. Liliana Vess and Sensei's Divining Top can find cards for right now and cards for Pyxis of Pandemonium. With Omniscience, I can opt to use the single-card strategy with Pyxis and get a single Omniscience in play, or just load a handful of cards under Pyxis. Grave Titan adds a little nasty when you open Pandora's Box.

And next week's preview card just adds to the chaos!

However you use Pyxis, the card promises to bring big changes to your games!