Is There a Draft in Here?

What your group can gain from Emperor Draft

n the past, I've written once or twice on Emperor Draft format. Draft Week is a great time to revisit the topic and give you a diagnostic tool to determine if Emperor Draft is right for your group.

First, you should know where I stand. I believe if Wizards ever sanctions multiplayer formats, Emperor Draft should be one of the first two or three such formats it sanctions. It's follows a familiar and well-known casual format (emperor), forces players to change how they value many cards, doesn't require much (if any) rethinking in design or development, and dovetails nicely with my ongoing case that Wizards could make a ton of money off of combining the profitability of tournament play with their customers' natural tendency to cluster into teams.

Expect me to push this in the future, even if some of you don't care for the format. I'll gladly spend most weeks talking about crazy pink dinosaur formats; but every once in a while I like to advance my own agenda. Thanks in advance for sharing the ride this time. 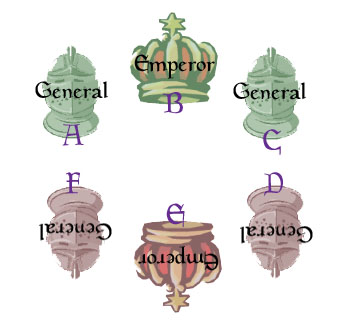 WHAT IS EMPEROR DRAFT?

Some of this is review from past articles, so we'll move quickly. To know how to do emperor draft, first you need to know how to play emperor. You can find a more involved discussion here, but the basics of the format are as follows:

Now that you know what emperor is, how do you draft it?

What is Booster Draft?

Booster draft is a limited format where players pick cards from a common pool of cards. Each player at the table starts with three unopened booster packs. Instead of just opening your cards and building a deck, you and the other players at the table have to draft the cards for your decks.

At the start of a booster draft, each player opens a pack and picks the card he or she wants from it. (You can't see the cards that the other players draft.) Then each player passes the rest of the pack to his or her left. You pick up the pack that was passed to you, select a card, and pass the rest to your left. This process continues until all the cards have been drafted.

Next, each player opens a second pack, but this time, you pass the pack to your right. After all those cards are drafted, you open the third pack and pass to the left again. At the end of the draft, each player has forty-five cards—and unlimited basic lands—to build a deck with.

Laura Mills, a member of our play group and a fairly prolific Internet writer on Magic topics, came up with a nice touch on pre-game decisions. She suggests the two emperors roll off, and the winner can choose either (a) which emperor goes first or (b) who will sit to her left.

The reason this is important? Generally, the player to the emperor's left should be the "hammer" – the player with the fastest deck, built to crush the opposing flank and turn this into a 3-on-2 as quickly as humanly possible. If your team wins the die roll and decides your emperor will go first, that left flank is taking the second turn of the entire game, already has an emperor with a land down, and has some advantage over the opposing flank. Being able to determine who will sit on which side (and therefore where your opponents' flanks will sit) can mean the difference between winning and losing.

SO WHAT'S THE BIG DEAL?

There are five cool things about Emperor Draft that keeps our group, and many other players I've heard from, coming back to the format:

As an emperor in draft, you get to value cards much differently.

IS YOUR GROUP READY TO BE DRAFTED BY AN EMPEROR?

I'm likely to steer you toward "yes", so don't be shocked by the bias. But here are some helpful questions for you or your group to ask yourselves:

Can you put together six people on a regular basis? (Give your group 0 points for "never", 1 point for "sometimes", and 2 points for "almost always".)

Of course, you do need six. If you can't ever pull this off on your own, you'll need to beg around the local store – see if they'll sponsor an event some day and see how it goes. (They have web browsers, so point them to this article.)

Do the players in your group enjoy and play a lot of mono-color decks? (0 points for "yes, lots", 1 point for "sometimes", and 2 points for "almost never")

Have you heard many comments in your group lately about "the same boring decks"? (0 points for "not at all", 1 point for "from a couple of folks", and 2 points for "all the time, it seems")

See my comments in the section above about the benefits of emperor draft. Every night will see different decks, with emperor draft. But if your group is already throwing so many new and creative decks out there every week that you don't need a new format, maybe you can wait a while before picking it up.

Does your group like changing decks every game? (0 points for "yes", 1 point for "no big deal either way", 2 points for "we always play matches, 2 out of 3")

A 2-out-of-3 match is a near-necessity with Emperor Draft, since there's little point to playing a single game after spending all that time drafting and deckbuilding. Therefore, a draft will likely take up at least two hours. People may get stuck for that entire time with a deck they're not crazy about. If your group is particularly fickle, go into this experiment with a clear head.

Do people get aggravated with each other for singling out during chaos games? (0 points for "nah, no one minds", 1 point for "it gets some people on edge", 2 points for "we seem to get upset at each other quite a bit")

Any team format will help salve the egos of those who don't like being singled out for attention. This is also a good way for groups with lots of players across different skill levels to avoid the "beat on the king" phenomenon. Team games play like duels; there's very little potential for politics or hurt feelings.

If your play group hasn't done anything new in a while, you've got to get out of that rut. Emperor draft can help.

Now, don't everyone get all bent out of shape here, but there are at least three reasons why older players will enjoy this format more. First, many teenagers don't have nearly the exposure to working as a team player that adults do. Younger players are often more comfortable as "lone wolves", battling in chaos games for pure supremacy. Older players have a richer background in teamwork – a lot of the fun in team play is in pointing out how your teammates are measuring up to standards of, say, a workplace. In emperor draft, the team aspect is there more than in any other format – including constructed emperor. From the moment you bust open your first pack to the last point of damage in game 3, you have to be thinking about what your teammates are doing. Adults, on average, do it better than teenagers. (We still suck at it.)

The second reason requires less controversial stereotyping. Older players generally have more resources than younger players. Emperor draft can become expensive if you want to do it more than, say, once a month. Honestly, all you need in a group is one guy with money who can buy the packs – you can always give the cards back. But the more financially self-sufficient players in your group, the more often you can draft.

Reason #3? I like our play group and wanted them to get 2 free points. (See? I'm a team player. I bet you meddling kids wouldn't have done that.)

If you got 10-14 points, you should absolutely give Emperor Draft a try. In fact, you probably already have!

If you got 6-10 points, you should talk about it in your group. Has your group tried regular drafting yet, or constructed Emperor? That might be a good first step, and then move on to Emperor Draft once you're looking for something new again.

If you got 0-6 points, you're a 1-1-1 stick-in-the-mud who should try Emperor Draft anyway. Get off yer butt and try it, you slugs.

Anthony cannot provide deck help. He is too busy bracing for the barrage of emails from teenaged, slug-loving, 1-1-1 enthusiasts who hate trying new things. Seriously, he's just pulling your chain. Don't flip out, kids. But if you do, by reading this disclaimer you and your parents still agree to hold Wizards of the Coast, Hasbro, and all other Hasbro affiliates and subsidiaries harmless for this crotchety old guy's ramblings. You can still pelt Mark Gottlieb on the boards, though. That's always good sport, and he hates drafting. And mothers. And apple pie.